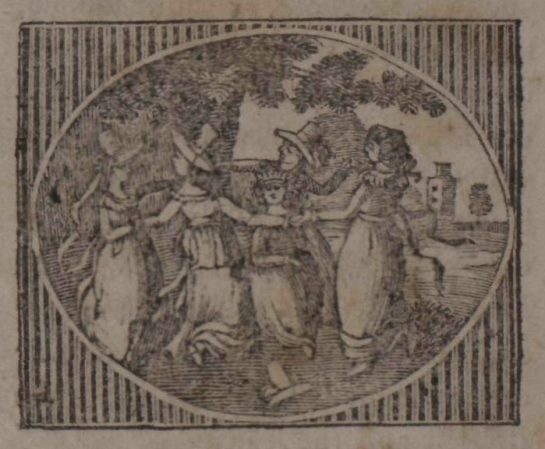 The March release of Early American Imprints, Series II: Supplement 2 from the American Antiquarian Society includes a rare description of a “Juvenile Seminary” in New York City; a discourse delivered to the New-York Historical Society in 1809 marking the 200th anniversary of Henry Hudson’s exploration of the region; and a whimsical, illustrated story for young women. 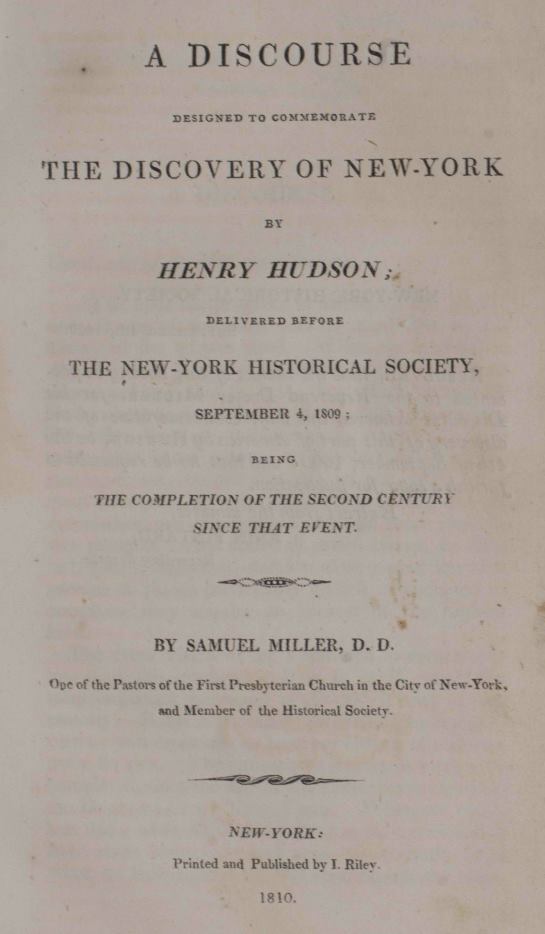 A Discourse Designed to Commemorate the Discovery of New-York by Henry Hudson; Delivered before the New-York Historical Society, September 4, 1809; Being the Completion of the Second Century Since that Event (1810)

By Samuel Miller, D.D., one of the pastors of the First Presbyterian Church in the City of New-York, and member of the Historical Society

In his opening remarks, Miller recognizes the importance of the date of his delivery:

The event which we are assembled to commemorate is of this character. It is, in itself, one of the most important that occur in the early history of our country. But it is peculiarly interesting to AMERICANS; and especially so to every citizen of OUR OWN STATE. The SECOND CENTURY IS THIS DAY completed, since the date of what deserves to be styled the DISCOVERY OF NEW-YORK. When we recollect this; when we look back upon the scenes which have since been exhibited upon this territory; and when we look around us, and contemplate the situation and prospects which, under the smiles of a benignant Providence, we have attained;—the occasion is surely calculated to swell the mind with various and deep emotions.

The author briefly recounts the circumstances of several European nations engaged in world discovery and trade including the Cabot brothers and Verrazzano who wrote [spelling as given]:

He says expressly, “Sometimes our men stayed two or three daies on a little island neere the ship, for divers necessaries.” And again, “we were oftentimes within the land five or six leagues, which we found as pleasant as is possible to declare, very apt for any kind of husbandry, of corne, wine, and oyle. We entered afterwards into the woods, which we found so great and thicke, that any army, were it never so great, might have hid itselfe therein; the trees thereof are okes, cipresse-trees, and other sortes unknown in Europe.

Subsequently, Verrazzano returned to Europe and…

“…gave to the whole country, the coast of which he had visited, and partly explored, the name of New France. But his discovery (if it can be called by that name) does not appear to have excited the least attention, nor to have served as a guide to any succeeding navigator. The truth is, his voyage having neither produced nor promised any addition to the revenues of France, all further attempts to pursue his discovery were laid aside, and the very memory of it almost permitted to perish. It is distressing to add, that, according to some writers, Verrazzano, in a subsequent voyage, was cut to pieces and devoured by the savages…

…In the year 1609, occurred that important event, which we this day commemorate; and which, considered in all its circumstances, deserves to be styled the DISCOVERY of what is now called New York.

The author of this discovery was HENRY HUDSON, a native of Great Britain. It is to be lamented that nothing is known concerning the birth, the education, or the early history of this celebrated navigator. It is fairly to be presumed, however, from the magnitude and difficulty of the enterprises entrusted to his management, not only in his own country, but elsewhere, that he was highly esteemed; and that he had given indubitable proofs of his intrepidity, skill, and maritime experience. 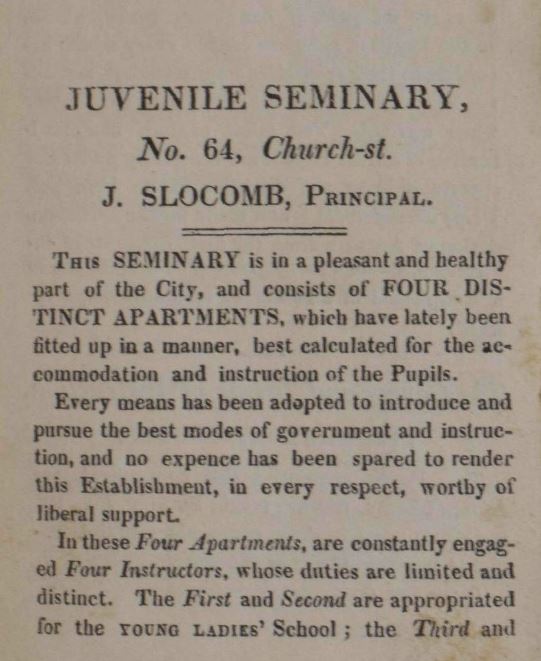 This Seminary is in a pleasant and healthy part of the City, and consists of FOUR DISTINCT APARTMENTS, which have lately been fitted up in a manner, best calculated for the accommodation and instruction of Pupils.

Every means has been adopted to introduce and pursue the best modes of government and instruction, and no expence [sic] has been spared to render this Establishment, in every respect, worthy of liberal support.

In these Four Apartments, are constantly engaged Four Instructors, whose duties are limited and distinct. The First and Second are appropriated for the YOUNG LADIES’ SCHOOL; the Third and Fourth for the YOUNG GENTLEMEN’S.

The brochure describes the academic demands for each group of students under the heading “The Course and Terms of Instruction.” An example:

The Pupils composing this department, are Little Children, who are taught Spelling, Reading, and every requisite duty, preparatory to their entrance into the Minor or Intermediate classes.

And under the “Young Ladies’ School. No. 1” heading:

The Young Ladies of this Department are those, who belong to the Seniour [sic] & Juniour [sic] Classes, and according to their respective improvements, are regularly promoted through all branches, which comprehend an ornamental and useful education.—Course of Instruction—English, and French Languages, Grammar, Rhetoric, Composition, Arithmetic, Penmanship, Geography, the use of Globes and Maps, History, Plain, fine and Ornamental Needle-work, &c. &c.

Terms per qr. (to the present Scholars) in this Department—are 7 dolls.

There are frequent allusions to the behavior required of all of the pupils.

From each of the Scholars, will be expected punctual attendance, docile attention and cheerful obedience…

…Irregular attendance, not only causes want of time for performing every scholastic duty: but it breaks the regular chain of study; creates dislike—destroys all emulation for advancement in learning; and is the death blow to all solid improvement…

…The discipline of the School is absolute. Punishments shall be inflicted when merited. Every Scholar should therefore, clearly understand, that connivance to escape from deserved censure, is out of the question…

…No Scholar shall play truant, or associate with the idle and strolling blackguards. 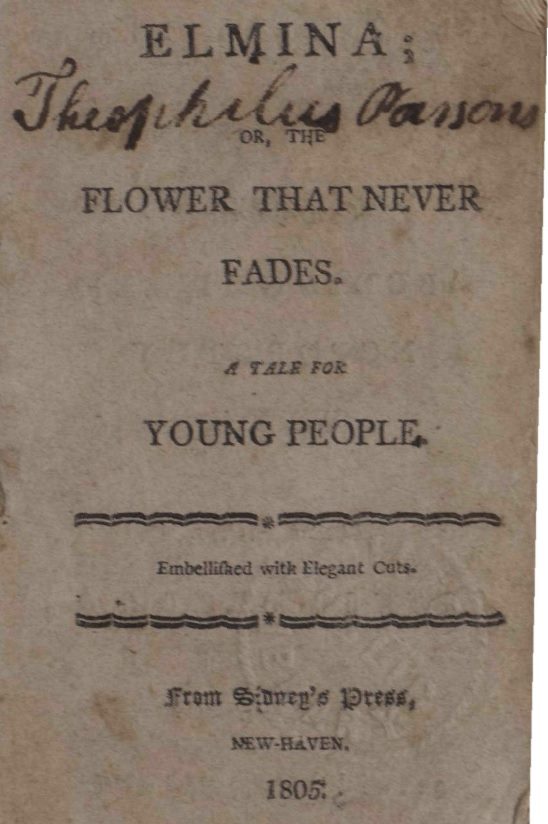 Elmina; or, The Flower that Never Fades: A Tale for Young People: Embellished with Elegant Cuts (1805)

This imprint relates a whimsical tale of young princesses and good fairies.

There lived a long time ago, and in a very distant country, a young Princess whose name was Elmina. She was very handsome and very lovely: Youth and innocence are always so; but innocence frequently vanishes with infancy, and lovliness [sic] takes wing at the same time. The young Princess was an orphan; and a benificent [sic] fairy, whose name was Lidoriana, undertook the care of her education. Elmina did not know she was a fairy; but she loved Lidoriana as a friend, and honoured her as her mother.

One day the Princess was amusing herself with several female friends in the meadow. The author makes an entertaining observation:

When they had gathered a great quantity [of flowers], they seated themselves under a shady tree, to make them into crowns, garlands, and nosegays; and while they thus amused themselves, some prattled, and others told tales: It is well known, that young girls love to prattle and relate stories because they remember every thing they hear.

Elmina was considered to be the fairest of her friends but was gracefully modest and did not seek to be celebrated. Her natural modesty informed her behavior much to her credit. The good fairy protected her and taught her to be good with a complicated gift of flowers which she must care for and which will droop and fade if she behaves badly. She learns well, and it is said of her at the tale’s conclusion…

for you must know that there is a little fairy called Renown, who goes about the world telling every thing she knows good or bad of people, and especially of young princesses. Renown, then, did not fail to publish the virtues and graces of Elmina, and all the nations of the earth wished to have for queen so accomplished a Princess.

For more information about Early American Imprints, Series I and II: Supplements from the American Antiquarian Society, 1652-1819, please contact readexmarketing@readex.com.