The April release of Early American Imprints, Series II: Supplement 3 from the American Antiquarian Society, 1801-1819, includes these three rare items: a strident political broadside, a treatise on logic by a popular hymn writer, and a piece of juvenile literature describing the season of rebirth.

To the Independent Electors of York and Adams Counties (1803) 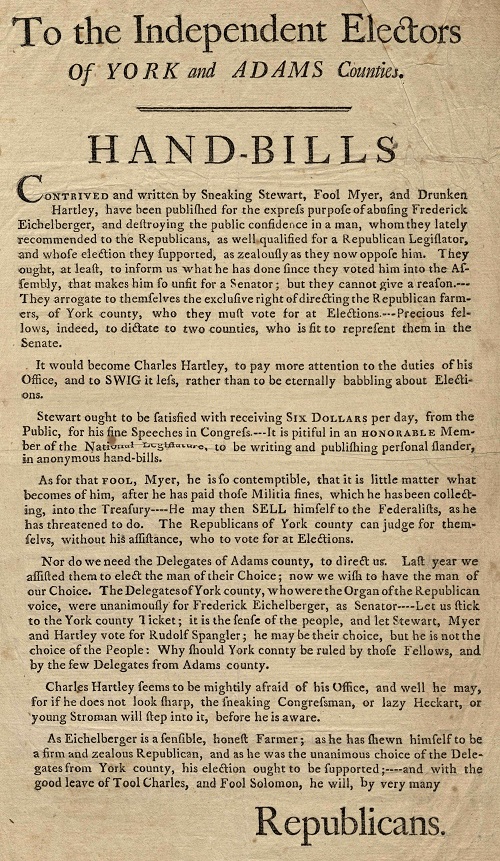 This broadside, supporting Frederick Eichelberger’s election to the Pennsylvania Senate, begins by attacking his political opponents.

Contrived and written by Sneaking Stewart, Fool Myer, and Drunken Hartley, have been published for the express purpose of abusing Frederick Eichelberger, and destroying the public confidence in a man, whom they lately recommended to the Republicans, as well qualified for a Republican Legislator, and whose election they supported, as zealously as they now oppose him. They ought, at least, to inform us what he has done since they voted him into the Assembly, that makes him so unfit for a Senator; but they cannot give a reason.

The advertisement continues its scathing review:

It would become Charles Hartley, to pay more attention to the duties of his Office, and to SWIG it less, rather than to be eternally babbling about Elections.

Stewart ought to be satisfied with receiving SIX DOLLARS per day, from the Public, for his fine Speeches in Congress --- It is pitiful in an HONORABLE Member of the National Legislature, to be writing and publishing personal slander, in anonymous hands-bills.

As for that FOOL, Myer, he is so contemptible, that it is little matter what becomes of him, after he has paid those Militia fines, which he has been collecting, into the Treasury --- He may then SELL himself to the Federalists, as he has threatened to do. The Republicans of York county can judge for themselves, without his assistance, who to vote for at Elections.

Logic, or the Right Use of Reason, in the Inquiry After Truth (1806) 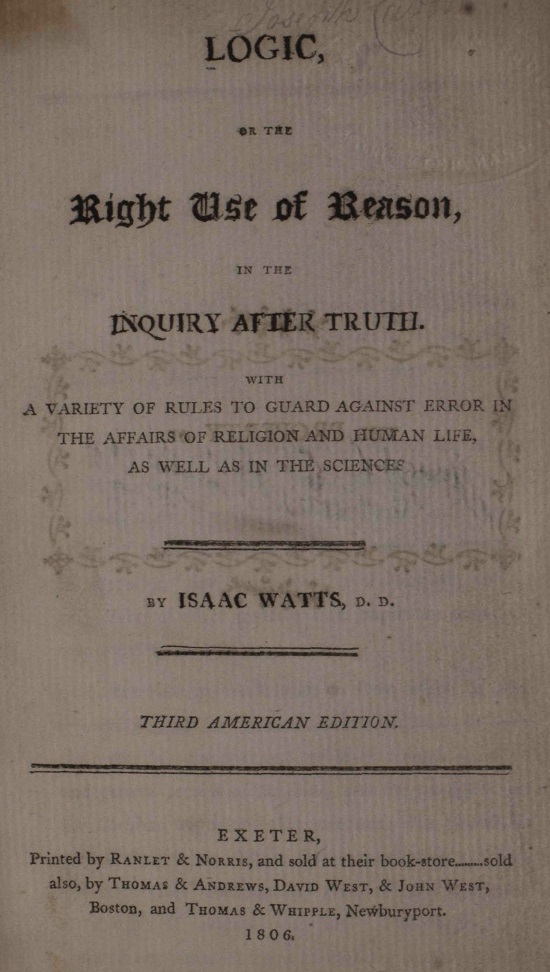 Isaac Watts (1674-1748) was an English Congregational minister, theologian, logician, and prolific hymn writer. As a nonconformist Watts was unable to attend Oxford or Cambridge and instead enrolled at the Dissenting Academy at Stoke Newington. He then became a pastor of a large independent chapel where he held religious opinions that were more nondenominational than those of most nonconformist Congregationalists. Watts maintained a greater interest in promoting education and scholarship than preaching for any particular religious sect. Introducing his work he writes:

I have therefore collected and proposed the chief principles and rules of right judgment in matters of common and sacred importance, and pointed out our most frequent mistakes and prejudices in the concerns of life and religion, that we might better guard against the springs of error, guilt and sorrow, which surround us in our state of mortality.

There is yet a further proof that our intellectual or rational powers need some assistance, and that is because they are so frail and fallible in the present state: We are imposed upon at home as well as abroad: We are deceived by our senses, by our imaginations, by our passions and appetites, by the authority of men, by education and custom, &c. and we are led into frequent errors, by judging according to these false and flattering principles, rather than according to the nature of things….So that one great part of the design of logic is to guard us against the delusive influences of our meaner powers, to cure the mistakes of immature judgment, and to raise us in some measure from the ruins of our fall.

It is evident enough, from all these things, that our reason needs the assistance of art in our inquiries after truth or duty; and, without some skill and diligence, in forming our judgments aright, we shall be led into frequent mistakes both in matters of science, and in matters of practice; and some of these mistakes may prove fatal too. 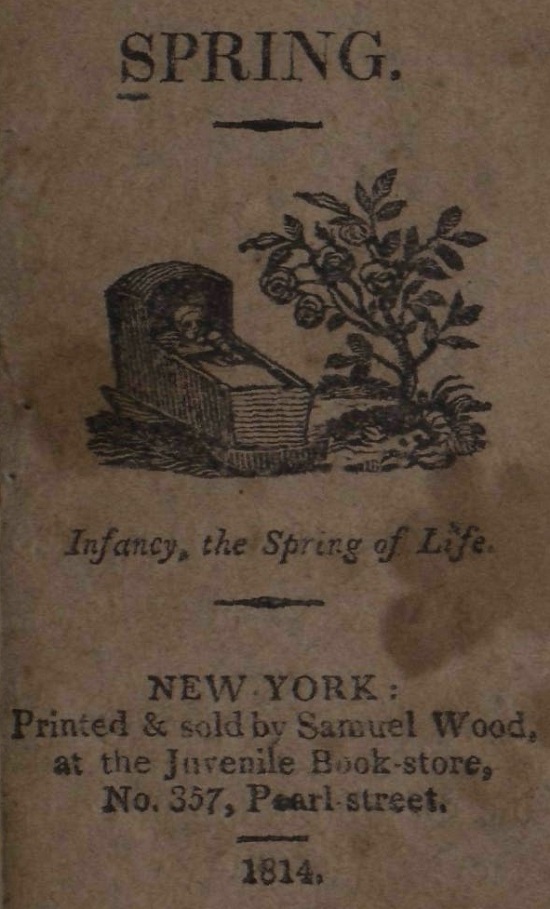 Ah! see how the ices are melting away,

The rivers have burst from their chain:

The woods and the hedges with verdure look gay,

And daisies enamel the plain.

The sun rises high and shines warm o’er the dale.

The orchards with blossoms are white;

The voice of the wood lark is heard in the vale,

And the cuckoo returns from her flight.

Young lambs sport and frisk on the sides of the hill,

The honey bee wakes from her sleep,

And snow drops and primroses peep.

The creatures begin their employ;

Then let me not be less industrious than they,

An idle or indolent boy.

Now while in the spring of vigour and bloom,

In the paths of fair learning I’ll run;

Nor let the best part of my being consume,

With nothing of consequence done.

Thus while to my lesson with care I attend,

And store up the knowledge I gain,

When the winter of age shall upon me soon descend,