Many of the documents in the October release of The American Civil War Collection, 1860-1922: From the American Antiquarian Society are histories of specific regiments. Some contain registers naming each member of the regiment. Others include photographs of their officers. But they all have unique perspectives and descriptions of their regiment’s particular “tramps and triumphs.”

At a ceremony honoring Col. Rush Christopher Hawkins and the Ninth Regiment of New York Volunteers, also known as “Hawkins’ Zouaves,” Charles P. Kirkland contextualized the gravity of the Civil War. He considered it not only “a contest for a nation’s life” but also a “contest for the very existence of Republican Government, not only here but every where, for if our experiment fails, it surely can NEVER be repeated,—it is a contest… to determine the question of man’s capacity for self-government.” Kirkland continued: 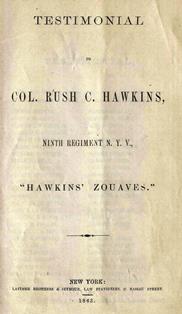 It is to decide the question whether there shall be on the globe a place of refuge for the lovers of liberty in all lands,—one spot where man can assert his manhood, and where Kings and despots cannot grind him to the earth. It is vain to say that this contest does not involve and will not decide these momentous questions; for if this Republic is dismembered and a distinct, independent nation is established and recognized within our present borders, it requires no prophet to foretell the total disintegration of the country—the extinction forever of the proud name of American citizen and the division of “the United States of America” into numerous petty, warring, insignificant provinces, without power, without position, influence or respect,—without a national name. 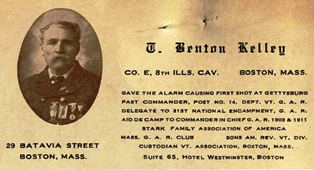 At the Battle of Gettysburg, Thomas Benton Kelley was one of the first Union soldiers to spot approaching Confederate troops and he gave the alarm that led to the fight’s first shots. He described his regiment’s march from Edwards Ferry, Maryland, to Gettysburg, Pennsylvania, and the ensuing battle in verse, as seen in these two excerpts:

The leaders set the hasty pace through blinding dust and sun,
But not a trooper wavered there—the forced march must be done;
Through torrid heat five weary days those loyal troopers toil,
With Gamble’s First Brigade in lead we rode on famous soil.

The advancing forces halted, and skirmishers at once deployed;
Our own men formed dismounted on our old picket line,
And in twelve or fifteen minutes the skirmish opened fire;
Our first line soon was reinforced, surprising much the foe,
As three full lines in our own front had failed to make us go;
Their officers fiercely shouting all up and down the line,
“They’re Couch’s State Militia! You can tell them every time;”
Our lads were surely tickled, but kept pouring in the lead,
While far outnumbering forces around our flanks had sped;
Then falling back to Willoughby Run we made another stand,
While fast repeating-carbine shots were heard on every hand.

In this informal regimental history of the Second Iowa Infantry, John Thomas Bell included anecdotes of the daily trials of soldiering:

We left town aboard a freight train, and flattered ourselves we had only a pleasant ride before us, but at the foot of the first upgrade we struck we had to “disembark” and push the wheezy old engine and empty cars up to the level, and this was repeated at frequent intervals for nine miles, when we abandoned the train entirely in the midst of a drenching rain...

As well as tales of the serious work of war: 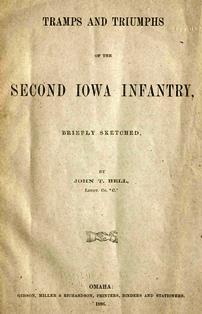 During the summer of 1863 many of our men were shot on outpost duty, and it became very dangerous to be assigned to that service. It was conceded that it was being done by parties fully acquainted with our guard lines, and finally the mystery was solved by the capture of one Johnston, a member of company “D,” First Alabama Cavalry (Union)….Johnston had left the rebel army, joined ours, and after learning the location of our outposts, deserted and organized a squad of guerrillas and put in several weeks’ active service in crawling quietly through the woods up to vidette posts and shooting down in cold blood the soldier on duty. 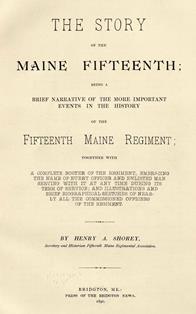 At the onset the rebels sent down a huge fire-raft, piled very high with wood soaked in turpentine—a “firey monster” indeed! But a boat shot out from the fleet, and, with grappling irons, so “curbed” the “monster” that he was harmlessly led to the shore, and allowed to burn to the water’s edge! During the three day’s cannonade, the scene simply beggars description. It was a long-prolonged shower of perpetual thunder and lightning, which seemed to shake earth and heaven from their very foundations. But it was an inexcusable waste of ammunition and entirely barren of results. Neither forts or ships manifested the slightest disposition to yield. And when the brave old Admiral became satisfied that this was the situation, he heroically determined to “run the forts,” in spite of the obstructions in the river thought by many to be impassable.

For Company D of the 4th Massachusetts Heavy Artillery, the final days of the Civil War are described in their regimental history, as follows: 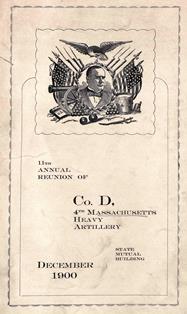 n the early part of March, 1865, the Colonel sent a request by his orderly to Capt. Bemis to report at his headquarters. At that interview with the Colonel, Capt. Bemis was informed by him that there was to be a change in the location of some of the troops; that he knew their quarters at Fort Richardson were not pleasant, and that he liked to accommodate his officers who always uncomplainingly did their duty, and said: “I think Fort Berry is a pretty fort. You go and look it over, and if you would like to take your company there I will arrange it so that you can do so.” The result was that in a few days Co. D, 4th Mass. H.A., received orders to proceed to Fort Berry, Va., and take command of the same. There they remained until the last gun of the long warfare was fired, and the surrender at “Appomattox” of the rebel chief to our Gen. Grant will forever be remembered as the final scene of the long, wicked war.