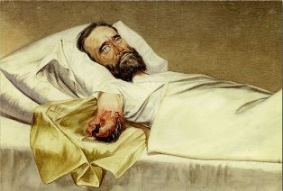 The December release of The American Civil War Collection, 1860-1922: From the American Antiquarian Society contains many documents pertaining to military medicine during the war. These include works on providing immediate surgical care on the battlefield, maintaining the health of a standing army, helping to recuperate the sick and wounded, and raising funds to care for veterans. 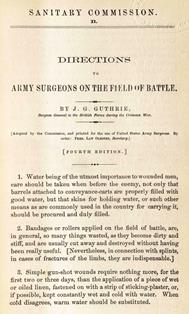 Directions to Army Surgeons on the Field of Battle (1861)
By George James Guthrie, Surgeon General to the British Forces during the Crimean War

George James Guthrie’s directions were adopted by the United States Sanitary Commission and printed for the use of the Union surgeons. The directions include recommended treatments for gunshot and saber wounds to most parts of the body. Also included are extensive instructions on both when and how to amputate limbs.  One of the less grisly directions illustrates the state of surgery in the mid-19th-century, noting the difficulties of the practice and techniques to be discontinued:

When it is doubtful whether the bleeding proceeds from the cavity of the chest, or from the intercostal artery, (a surgical bugbear,) an incision through the skin and the external intercostal muscle will expose the artery close to the edge of the rib having the internal intercostal muscle behind it. The vessel thus exposed may be tied, or the end pinched by the forceps, until it ceases to bleed. Tying a string round the ribs is a destructive piece of cruelty, and the plugs, &c., formally recommended, may be considered as surgical incongruities. 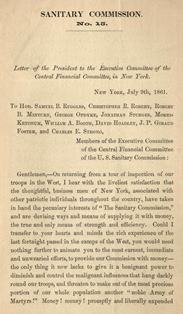 Letter of the President to the Executive Committee of the Central Financial Committee, in New York (1861)
By Henry Whitney Bellows, President of the Sanitary Commission

The United States Sanitary Commission was a private relief agency that enlisted thousands of volunteers to support sick and wounded soldiers of the U.S. Army during the Civil War. In a letter seeking monetary support, Henry Whitney Bellows described the difficult living conditions and the subsequent consequences to the soldiers’ health:

Consider the prospects of 250,000 troops….gathered not only from the out-door, but still more from the in-door occupations of life: farmers, clerks, students, mechanics, lawyers, doctors, accustomed, for the most part, to regularity of life, and those comforts of home…; consider those men, used to the tender providence of mothers, wives and sisters, to varied and well prepared food, separate and commodious homes, moderate toil, to careful medical supervision in all their ailments—consider these men, many of them not yet hardened into the bone of rugged manhood, suddenly precipitated by unexpected events into the field of war, at the very season of the greatest heat, transferred to climates to which they are unwonted, driven to the use of food and water to which they are not accustomed, living in crowded barracks and tents, sleeping on the bare earth, broken of rest, called on to bear arms six and eight hours a day, to make rapid marches over rough roads in July and August, wearing their thick uniforms and carrying heavy knapsacks on their backs—and what can be looked for, but men falling by the dozen in the ranks from sheer exhaustion, hundreds prostrated with relaxing disorders, and finally, thousands suddenly swept off by camp diseases, the result of irregularity of life, exposure, filth, heat, and inability to take care of themselves under such novel conditions. 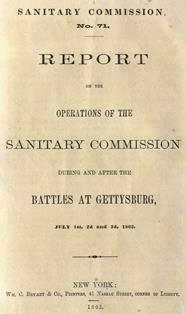 In his report on the operations of the Sanitary Commission at Gettysburg, John Hancock Douglas drew attention to the additional hardships endured by the medical corps compared to that of the typical soldier:

The labor, the anxiety, the responsibility imposed upon the surgeons after the battle of Gettysburg were from the position of affairs, greater than after any other battle of the war. The devotion, the solicitude, the unceasing efforts to remedy the defects of the situation, the untiring attentions to the wounded upon their part, were so marked as to be apparent to all who visited the hospitals. It must be remembered that these same officers had endured the privations and fatigues of the long forced marches with the rest of the army; that they had shared its dangers, for one medical officer from each regiment follows it into battle, and is liable to the accidents of war, as has been repeatedly and fatally the case; that its field hospitals are often from the changes of the line of battle, brought under fire of the enemy, and that while in this situation, these surgeons are called upon to exercise the calmest judgment, to perform the most critical and serious operations, and this quickly and continuously. The battle ceasing, their labors continue. While other officers are sleeping, renewing their strength for further efforts, the medical are still toiling. They have to improvise hospitals from the rudest materials, are obliged to make ‘bricks without straw,’ to surmount seeming impossibilities. The work is unending, both by day and night, the anxiety is constant, the strain upon both the physical and mental faculties, unceasing. Thus, after this battle, operators had to be held up while performing the operations, and fainted from exhaustion, the operation finished. One completed his labors to be seized with partial paralysis, the penalty of his over-exertion. 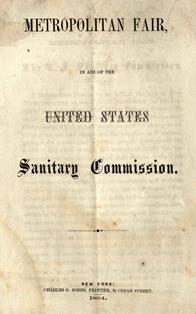 In March 1864, a Metropolitan Fair was held in New York City to raise money in support of the Sanitary Commission and their ongoing effort to benefit sick and wounded soldiers. The Fair’s promoters invited merchants and artisans as well as painters and sculptors from the city to contribute their wares and works. They invited farmers from the surrounding country to “bring…gifts from their barns, their stalls, their dairies, and their poultry yards.” Expecting to hold a fair “worthy of the great city…and of the great occasion” the promoters wrote that the Fair,

…must be universal in its attractions, enlisting all sympathies, pleasing all healthy tastes, and satisfying all honest needs. It must be democratic, but not vulgar; elegant, but not exclusive; fashionable, but not frivolous; popular but not mediocre. Therefore, it is intended that this Fair shall afford, in its getting up, something for everybody to do; something, when it opens, for everybody to buy; something to gratify the sober and please the gay, to win the approval of the serious and the utilitarian, and a the same time to catch the eye and suit the taste of the young, the light-hearted, and even the trifling. The good, the rich, the well-to-do—those in humble life, the fashionable, the politicians, the clergy, the Chamber of Commerce, the Police, the Fire Department, the Trades’ Unions, and all the great industrial establishments, should be interested in this Fair. 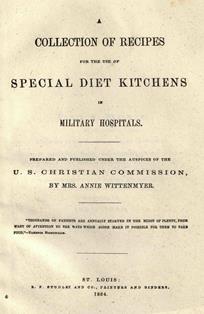 A Collection of Recipes for the Use of Special Diet Kitchens in Military Hospitals (1864)
Prepared and published under the auspices of the U.S. Christian Commission, by Mrs. Annie Wittenmyer

This volume includes recipes for many soups and puddings as well as other presumably easily digested foods such as beef tea. The recipe section concludes with directions for “Cordial without Cooking,” which calls for “one gallon of brandy…twelve quarts of fruit, nine pounds of white sugar, one ounce of cloves, one ounce of cinnamon, one ounce of ginger. Put the whole into a stone jar, and stir twice a day until the fruit becomes of a reddish color, after which it must be strained and bottled.”

Attached to and following the recipes are specific instructions for managers of special diet kitchens, suggestions on tending to the sick and wounded by the United States Christian Commission, and extracts from Florence Nightingale’s notes on nursing.