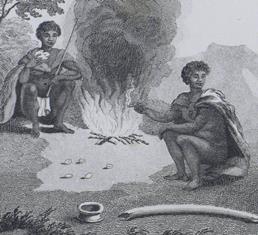 From an 18th-century report on an African expedition to a 19th-century compilation of American folklore, the February 2015 release of Afro-Americana Imprints, 1535-1922, contains a wide variety of valuable documents, all from the holdings of the Library Company of Philadelphia. Additional highlights include a work by Harriet Beecher Stowe describing the foundation and inspiration for Uncle Tom’s Cabin, a compilation of her articles promoting women’s rights, and an autobiography by James Still, illustrating some of the best and worst aspects of 19th-century America. 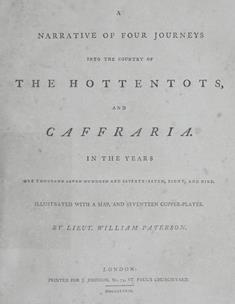 A Narrative of Four Journeys into the Country of the Hottentots, and Caffraria (1789)
By Lieut. William Paterson

William Paterson was a Scottish soldier, explorer, and botanist. Although he is more widely known for his service as Lieutenant Governor of New South Wales in 1794 and his 1804 exploration of the Tamar River in Tasmania, he also made four expeditions into the interior of Africa between May 1777 and March 1780. Patterson was financed by the wealthy and eccentric Countess of Strathmore, Mary Bowes, who shared an interest in botany and wanted Patterson to collect exotic plants for her. Many of the plants Patterson brought back, as well as the skeleton of a giraffe, were put on display in the Natural History Museum in London. Patterson was one of the first Europeans to adventure into present-day South Africa, and he offers this assurance of his work’s authenticity:

The public may depend upon it, that they are here presented with a series of facts, noted down upon the spot, without any after additions, with no ornaments of rhetoric, with nothing to recommend them but the simple form of truth, and perhaps some degree of accuracy.

A Key to Uncle Tom's Cabin; Presenting the Original Facts and Documents Upon Which the Story Is Founded (1853)
By Harriet Beecher Stowe

Harriet Beecher Stowe introduced A Key to Uncle Tom’s Cabin by comparing the work of writing fiction with that of reporting facts—in this case, the facts of slavery as understood by Stowe. She wrote: 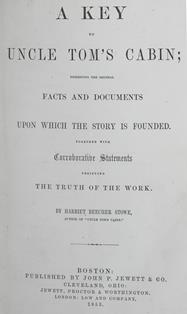 The work which the writer here presents to the public is one which has been written with no pleasure, and with much pain.

In fictitious writing, it is possible to find refuge from the hard and the terrible, by inventing scenes and characters of a more pleasing nature. No such resource is open in a work of fact; and the subject of this work is one on which the truth, if told at all, must needs be very dreadful. There is no bright side to slavery, as such. Those scenes which are made bright by the generosity and kindness of masters and mistresses, would be brighter still if the element of slavery were withdrawn. There is nothing picturesque or beautiful, in the family attachment of the old servants, which is not to be found in countries where these servants are legally free. The tenants of an English estate are often more fond and faithful than if they were slaves. Slavery, therefore, is not the element which forms the picturesque and beautiful of Southern life. What is peculiar to slavery, and distinguishes it from free servitude, is evil, and only evil, and that continually. 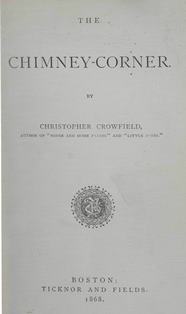 The Chimney-Corner (1868)
By Christopher Crowfield

More than a decade after Uncle Tom’s Cabin appeared, Harriet Beecher Stowe—writing under the male pseudonym Christopher Crowfield—published a series of articles and stories that focused on women’s rights.  In a piece titled “Women’s Sphere,” Stowe argues for property rights and educational opportunities for women, equal pay for equal work, and a woman’s right to vote. Just as unequal pay for equal work persists today, a certain perception of the women’s rights movement, as illustrated by Stowe through the fictitious character Bob Stephens, seems to remain only just below the surface in some of today’s political discussions.

“What do you think of this Woman’s Rights question?” said Bob Stephens. “From some of your remarks, I apprehend that you think there is something in it. I may be wrong, but I must confess that I have looked with disgust on the whole movement. No man reverences women as I do; but I reverence them as women. I reverence them for those very things in which their sex differs from ours; but when they come upon our ground, and begin to work and fight after our manner and with our weapons, I regard them as fearful anomalies, neither men nor women. These Woman’s Rights Conventions appear to me to have ventilated crudities, absurdities, and blasphemies. To hear them talk about men, one would suppose that the two sexes were natural-born enemies, and wonders whether they ever had fathers and brothers.”

Self-taught doctor James Still was born in the free state of New Jersey in 1812, but under the law of Maryland, the state from which his mother had escaped slavery, and federal law, he and his 17 siblings were legally slaves due to their mother’s fugitive status. Of his early life, he wrote:

In very early life my mind was troubled about what should be my occupation in life, although I had almost daily presentiments from three and a half years of age until I was twenty two or three, that I should be a doctor. At times I would be discouraged, seeing no way to obtain a knowledge of such an important profession. I supposed I would need to go to college, and there be instructed, but I had no finance to enable me, and, worst of all, I was not the right color to enter where such knowledge was dispensed...

Still studied folk remedies and learned about the healing powers of herbs and plants before apprenticing himself to a white doctor to further his medical education. Still became known as the “Black Doctor of the Pines” and in 1871 his son James Thomas Still would graduate from Harvard Medical School.

Mary Owen was a folklore collector who, after reading Algonquin Legends of New England, was inspired to record and compile works of the disappearing folk tales and legends of Missouri. In a story titled, Luck-Balls, Owen describes a traveling sorcerer of great powers known as the “King of the Voodoos” who: 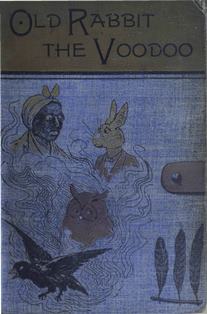 ...was a curious half-barbarian, who never stayed long in a place, made his entrances secretly and mysteriously in the night, never confided in any one, never spent money for anything but whiskey, never lacked for the good things of this world, and never was reduced to the inconvenience of begging or stealing….No one knew whence he came or whither he was going….How he came was a matter of conjecture; it was generally conceded that he travelled at his ease on some strange steed of the devil’s providing.

As soon as he was settled in his temporary quarters—that is, had eaten of everything in the larder, drunk generous potations of whiskey, and taken possession of the best chair—a messenger was sent out “to pass the word around” that he had arrived.

In the course of the night the answer came in the persons of scores of darkies, some of them from a distance of many miles, who eagerly purchased his remedies, charms, and “tricks.”