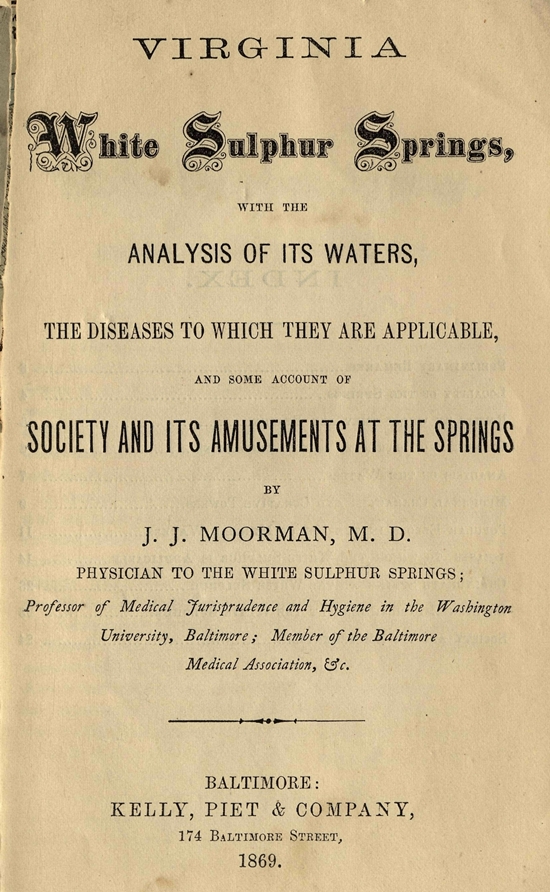 The Spring is surrounded by mountain scenery of great beauty, and blessed with a most delightful summer and fall climate. Independently of the benefits to be derived from the waters, a better situation for the residence of invalids and delicate persons, during the summer and fall months, can scarcely be imagined. They have here the advantage of a most salubrious and invigorating air, and the most agreeable temperature….while the atmosphere is so elastic and invigorating as to enable invalids to take exercise in the open air without inconvenience or fatigue.

Moorman is equally as enthusiastic about the accommodations as he is the climate:

To these ends they have erected the largest building in the Southern country—its dimensions being 400 feet in length by a corresponding width, and covering more than an acre of ground…The Parlor is one of the most elegant and spacious saloons in America, being half as large again as the celebrated East Room in Washington. The Dining Room, is one of the largest in the world, being upwards of 300 feet long by a corresponding width, and conveniently seating 1200 persons.

Moorman also describes the society and amusements which are to be found at the resort. Not surprisingly, both appear to be of the highest order. Contemporary readers may recognize this resort as what is now named The Greenbrier, and which is still a gathering place for the great and the good. An historical footnote: Now unclassified papers prove that this is also the location of an extensive nuclear bomb shelter constructed as a relocation facility to house the U.S. Congress in the event of a nuclear strike. 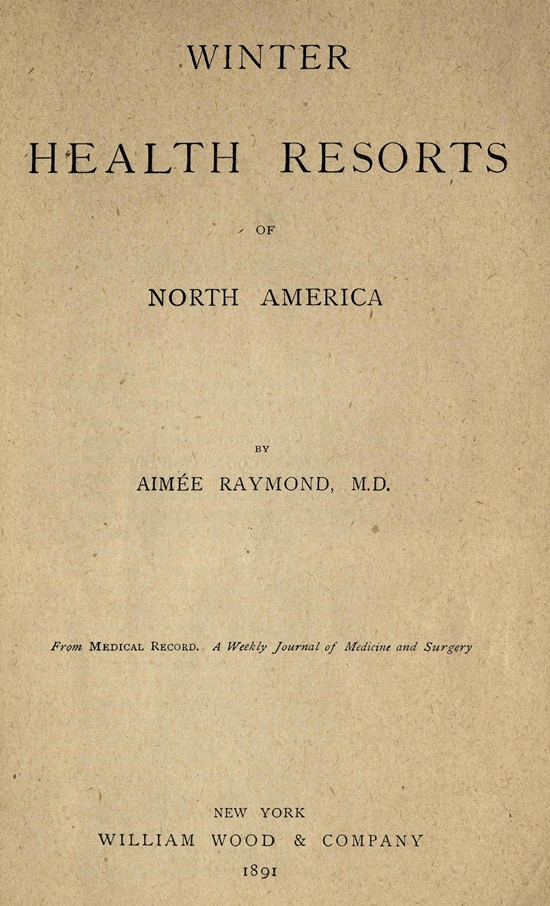 Doctor Raymond describes her purpose in producing this pamphlet:

At this season of the year many physicians are confronted with the problem of choosing a suitable place to which they may send patients whom it is found best to exile from home. North America offers a large and varied choice, from the bracing, tonic air of high latitudes and altitudes, to the mild, relaxing air of Southern climates. The following pages have been prepared with a view to placing before the busy practitioner a few facts in regard to these different winter resorts. They do not claim to be exhaustive, but having been largely compiled from reliable statements of the various local physicians who kindly lent their aid, they give data which in large part, we believe, have never been published.

She also advises that:

The physician can scarcely be too careful in exercising discretion as to the class of patients for whom a change of climate is deemed desirable, and also as to the choice of a suitable locality. As Dr. Bushrod W. James very justly observes: “The prescriber of climate must learn to individualize his prescriptions, not alone in regard to the disease, but more particularly in respect to the patient, for every victim of a given disease, such, for instance, as pulmonary phthisis, will not do equally well in the same climate; hence, in prescribing, the temperament of a patient and the nature and stage of his malady must be considered.”

There follows a state by state-by-state description of geographical locations, available accommodations, and details regarding the particular patient complaints that may be alleviated by the specific climate beginning with New York State’s Adirondack Mountains. Several locations in New Jersey are highly recommended:

Lakewood is situated in the midst of pine forests, and in the vicinity of two lakes, one of which is two miles long, and affords good boating and fishing. The air is fresh and invigorating, dry, free from the rawness of sea air, and laden with the odor of the pines….Sanitariums provide special douches and other curative appliances.

The air is said to have a specially beneficial influence upon affections of the throat and lungs, nasal catarrh, and kidney troubles.

Of Long Branch, the author says:

The air is moderately dry and bracing, the prevailing southerly breeze is often as warm in winter as in any except the hottest summer days….The drinking-water is excellent. Cases of anaemia, malaria, paralysis, fevers, or any blood dyscrasia, neurasthenia, lung and heart troubles, kidney diseases, cutaneous affections, whooping-cough, and chronic bronchitis may be sent to Long Branch.

Contemporary readers may have another view of Long Branch which was the home to Tony Soprano’s Badda, Badda Bing strip club and where he bought his wife a beach house to atone for his infidelity. Historians may know Long Branch as the summer resort for six American presidents. It was here that James Garfield was brought after being shot in Union Station in Washington, D.C. and subsequently died. 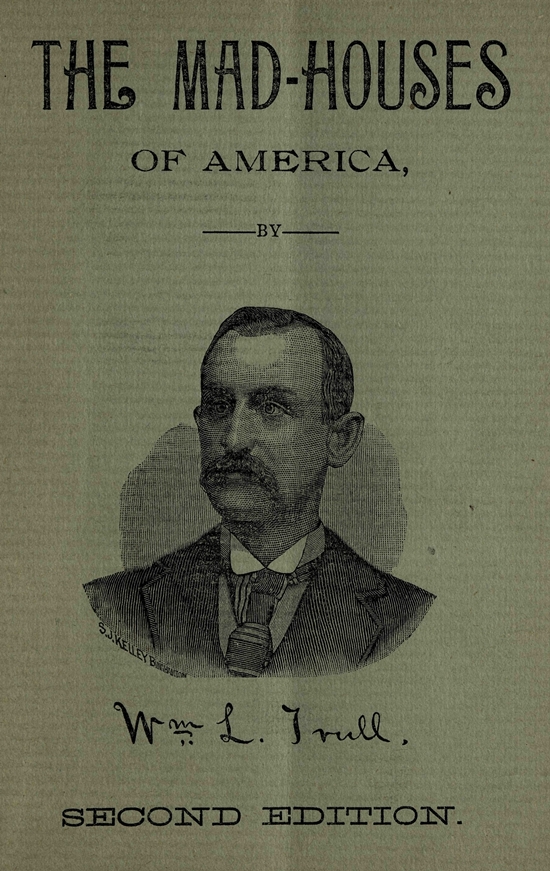 The title page of this pamphlet includes four lines of an unattributed verse:

Void of charity or pity,

Thine has been a bloody feast.

19th-century reformers sought to create institutions as a better alternative for mentally ill people than the patchwork of services, or, indeed, no services that existed for the relief of those deemed insane. Dorothea Dix is still remembered for her pioneering work in establishing what she hoped would be benign places for the provision of relief to such afflicted people. The author of this imprint would beg to differ with her vision.

On the 18th day of November, 1886 in the custody of officers of the law, I ascended the stone steps of the then called “Binghamton Asylum for the chronic insane” and took my place behind its iron bars as a legal lunatic for “treatment.” I submitted to the iron embrace of the institution referred to, pacing its halls by day, and sleeping with its insane inmates by night, for twenty months and three weeks; and to day [sic] I locate myself under the very eaves of that institution with the determination to fight it from without as I did within, regardless of consequence to myself….If the badness of a thing is to be measured by the pain it produces, the asylum system is the greatest evil upon the face of the earth; and if I am able to show that the Broome County Asylum is the evil that I KNOW it to be, and to demonstrate that this evil is not a necessary one, then such showing and such demonstration will sweep from them all the features which now scandalize humanity, for, be it remembered, all institutions are founded by man and man is an imitative animal. The management of the “Binghamton State Hospital” represents the wealth and wisdom of the world; I represent TRUTH only and KNOW that TRUTH will triumph.

With that introduction and avowal, Mr. Trull proceeds to assert his TRUTH. Whether or not he triumphs is best left to the reader. Certainly, this pamphlet provides reason to take him seriously.