0 comments
Antiques and the Arts Online recently reported the results of a Judaica auction held this past May that included important Americana items. Among the books sold was the first Haggadah printed in America (New York, 1837), which had been part of the Gratz College of Philadelphia’s library for nearly 100 years.
Bringing $12,300 was a June 19, 1790 issue of the Gazette of the United States, which contains this transcript of George Washington's four-paragraph letter to the Hebrew Congregation of Savannah, Georgia. 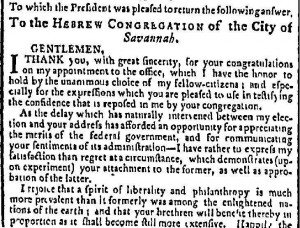 “May the same wonder-working Deity, who, long since delivering the Hebrews from their Egyptian oppressors, planted them in the promised land—whose providential agency has lately been conspicuous in establishing these United States as an Independent Nation—still continue to water them with the dews of Heaven and make the inhabitants of every denomination participate in the temporal and spiritual blessings of that people, whose God is Jehovah.”

Published in the same June 1790 issue of the Gazette is the influential letter that prompted Washington's reply. It is signed by Levi Sheftall (spelled Sheftal in the newspaper), president of Savannah’s Congregation Mickve Israel, the third oldest synagogue in the United States.

Sheftall’s letter, written on behalf of the Jews of Savannah and presented to Washington by James Jackson, Sheftall’s congressional representative, appears to have helped spur other American Jewish congregations, including those in Newport, Philadelphia, Richmond and Charleston, to send warm wishes to the new U.S. President. Later in the summer of 1790, Washington visited Newport, accompanied by Secretary of State Thomas Jefferson, Governor George Clinton of New York, and other prominent political figures. In a follow-up post, we’ll highlight Washington’s August 21, 1790 "Letter to the Hebrew Congregation of Newport, Rhode Island," which remains a strikingly powerful expression of American commitment to religious liberty.
Sources:
JewishVirtualLibrary.org
Loeb-TouroVisitorsCenter.org
TeachingAmericanHistory.org
Tags
Filed under