How Uncle Wiggily Taught Me to Read

How Uncle Wiggily Taught Me to Read 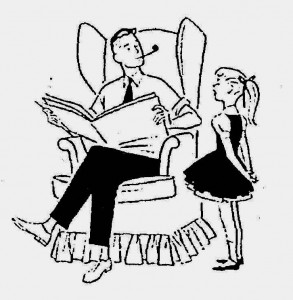 “Read me, Daddy!”  As if it were yesterday, I remember climbing up the puffy upholstered arm of my father’s chair as he settled in with the evening New Haven Register.  I wasn’t interested in the news of President Truman in Washington, or what was happening in that mysterious place called Korea where something bad was going on. No, I was eager for the latest installment of my favorite story, the tales of Uncle Wiggily, a “long-eared rabbit gentleman” and “Nurse Jane Fuzzy Wuzzy, his muskrat lady housekeeper.”  Together they solved the mystery of the day, like finding Billie Bushytail, the “little lost squirrel boy” who was chased up a tree by the fuzzy fox and the skillery-scalery alligator. I was four years old, about to start kindergarten, and oh, so eager to learn to read so I could pick up that newspaper myself and find out what happened next in the land of the silly animals. Thus began my love affair with newspapers, which have been part of my life in one way or another ever since. 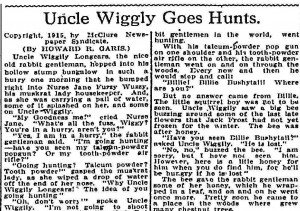 A search on “Uncle Wiggily” in Early American Newspapers yields thousands of references to the lovable old rabbit, along with the tales themselves and facts of how they came to be.  I was surprised to learn they began long before my time, actually in 1916, when my mother was a little girl.  Newspapers all across the country carried the series, which was distributed by the McClure Newspaper Syndicate. The column was written by Howard R. Garis, himself an elderly gentleman by the time his stories were read to me in the late 1940s and early ’50’s.  He lived in Amherst, Massachusetts, not far from my Connecticut home.  According to the obituary printed in the Chicago Tribune on November 6, 1962, he wrote some 15,000 stories before his death at age 89.  The piece went on to describe the day that Garis, “hiking in the woods in Verona, New Jersey,” spotted the inspiration for the thousands of tales to come. 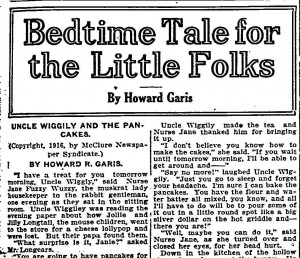 “He said he saw ‘a sedate but friendly looking old rabbit sitting upright with the utmost dignity’ behind a log.”  A journalist’s fertile imagination and a way with words brought that bunny to children across the country and around the world. Garis and his wife Lillian also penned a huge number of books, many of which figured in my early reading life, including the beloved Bobbsey Twins series, published under the pen name Laura Lee Hope.  Wikipedia describes the couple as “possibly the most prolific children's authors of the early 20th century.”  In addition to books, Santa Claus left Milton Bradley’s Uncle Wiggily board game under my Christmas tree, and under the trees of thousands of others during those years when fun was sitting around together as a family with nothing plugged in except the table lamp. 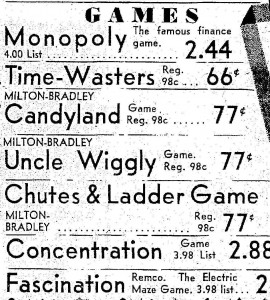 No doubt more than one generation of little people learned to read picking out the words of the serial tales that always began with Uncle Wiggily Longears in his hollow stump bungalow, and ended with a contorted hint of the story to come tomorrow.  “If the bread knife doesn’t cut a slice off the cake of soap, and feed it to the gold fish, I’ll tell you about Uncle Wiggily and Jilly Longtail.”  Perhaps that promise of something compelling to come is what kept readers loyal to the daily news growing up, and taught us that it was well worth having to wash the black ink stains off our fingertips when we were done.
Tags
Filed under