Constitutions and Constituents: Syria, the Soviet Union, and Security

An interesting dynamic is playing out on the world stage between Syria, Germany, and Russia. In a dramatic historical turn, a unified and economically resurgent Germany is welcoming Syrian refugees even as post-Soviet Russia redoubles its support for Syrian President Bashar Al-Assad’s brutal suppression of the fruits of the “Damascus Spring.”

To provide some context to current events, in this month’s highlights from Joint Publications Research Service (JPRS) Reports, 1957-1995, we offer West German and Soviet political commentaries on state power, and a core document, the 1962 Constitution of the Syrian Arab Republic. 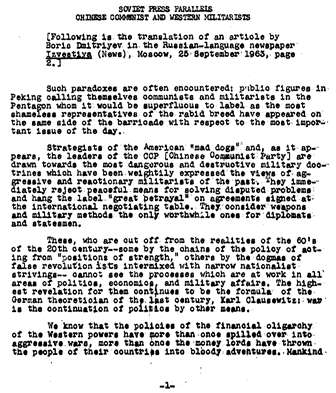 Citing Clauswitz’s dictum that “war is the continuation of politics by other means,” in the September 25, 1963, issue of Izvestiya, commentator Boris Dmitriyev claimed that on the question of nuclear war, both China and the United States were in favor of it. On the one hand, in his argument for the peaceful aspirations of the Soviet Union, the writer recognizes that “nuclear missiles have fundamentally changed the nature of modern warfare;” on the other, the USSR had just the previous year been discovered placing missiles in Cuba. With China and the Soviet Union locked in a bitter controversy over the true nature of communist orthodoxy, one might wonder whether the missiles removed from Cuba were usefully redeployed on the Asian continent—pointed east.

On a road in Rastenburg (now Ketrzyn), Poland, past the wild swans and the birches, the Polish Society for Tourism and Home Lore erected a sign leading travelers to the “Wolf’s Lair.” Upon arrival in 1963, for the price of ten zloty the curious visitor could tour the numbered ruins of the massive complex of reinforced concrete which served as Adolf Hitler’s headquarters from 1941-1944, where the Fuhrer narrowly escaped an assassination attempt. The presence of schoolgirls and wild strawberries are noted among the graves and mine fields in this short, poignant report.

The Lei Feng Campaign: A Pictorial Report on a Chinese Communist Hero

Lei Feng was literally the poster child for Chinese communism beginning in February 1963, although there is disagreement as to the existence of the actual person depicted. Some of the visual details were lost during the reproduction process, but there’s still a great deal to be learned through the captions and especially the numerous cartoons. If you’ve seen this Chinese Everyman once, you’ll recall having seen him a thousand times, which was the point, after all, as he was held to be the best guide and highest realization of the ideal communist citizen. 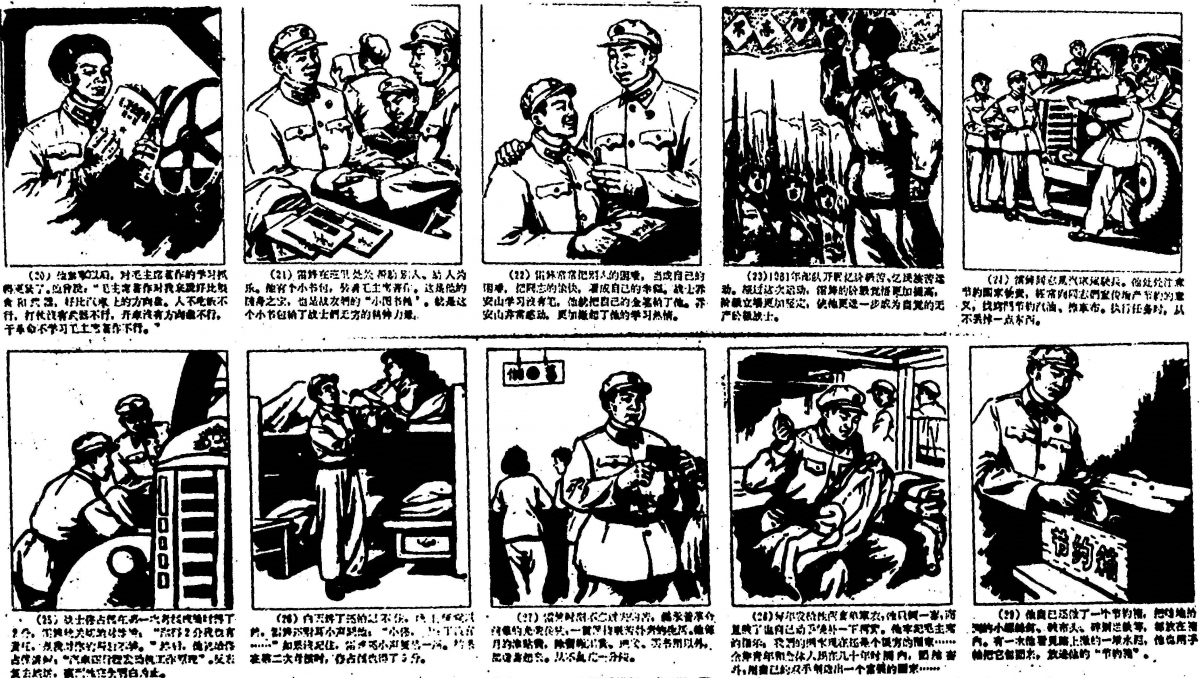 From the Earth to the Moon: New Heights of Human Achievement from Joint Publications Research Service (JPRS) Reports

We’re approaching escape velocity from a variety of perspectives this month. Is it the Moon you’re wanting to visit, or would you be content with achieving a few Earth orbits to advance your country’s standing in the Space Race? June’s highlights are about flight—aspirational, actual, and perceptual.

A New Assault on the Moon is Coming Soon

The Space Race was in progress and the Russians were winning. Shortly before his death, President Kennedy had announced his intention to send Americans to the Moon. But the Soviet Union had already taken the first pictures of the Moon’s dark side and had executed a “hard landing” with telemetry, whereas all the United States had managed was the very hard landing of Ranger 6 with video inexplicably out of commission. Was the Moon covered with dust to the extent of several meters that would bury future landers—and astronauts—or was the surface more firm and amenable to unmanned and manned visitors? This brief report from Bulgaria shows how confident the Soviet Union was in its technological, and by extension, its political systems.

Diary of a Pilot-Cosmonaut

In 1963 the Soviets would put the first woman into space and send two spacecraft into orbit at the same time—twice—while the United States was working on sending two astronauts into space in the same capsule with Project Gemini. This 43-page report is a colloquial account of life as a Russian cosmonaut, enigmatically attributed to “K.” in the Russian title. 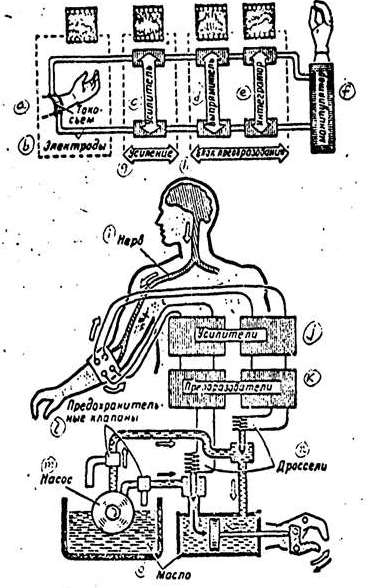 Journey without Adventure and Fantasy

Soviet geographer Ye. Murzayev spent 1956-1960 traveling in China, covering 53,000 kilometers. In the preface of this book the author maintains, “Many authors who have visited oriental countries have sought the exotic,” so he has intentionally left out such things as his impressions of Chinese cuisine, theater, and what he views as the typical stuff of travelogues. But the experiences and observations he does leave in allow us to see the title more in the light of his comment in the afterword, “Great things develop from that which is commonplace.” 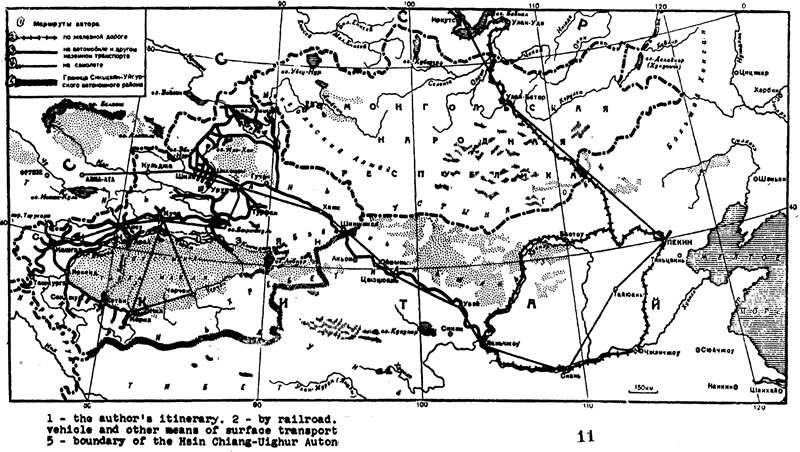 “But then it will be our turn”: Selected Items from Joint Publications Research Service (JPRS) Reports 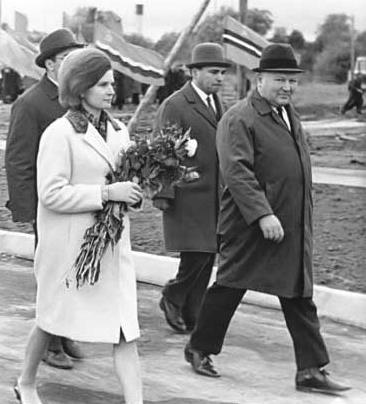 Background on the Flight of Valentina Tereshkova (1963)

The first woman to fly in space, in 1963 aboard the Vostok-6, was Valentina Tereshkova. She was born in 1937 into a peasant family. When her father was killed in World War II her mother supported three children as a textile worker. In her earlier remarks on the pioneering flight of Yuri Gagarin, she was quoted as saying “At first men will fly, but then it will be our turn.”

Student uprisings. A despotic Imam relegated to living in caves. Armed forces supported by regional powers and furnished with foreign weapons. Then as now, Yemen is a battlefield, but following the 1962 revolution the writer claims, “It would be no mistake to call the outstanding trait of the people of Yemen their love of peace.”

Selection of a Color Television System (1964) 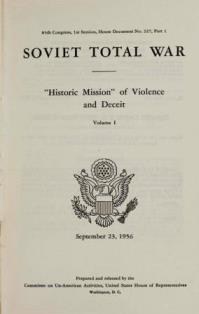 There is no lack of irony in Russia’s recent use of Cossack militia in the embattled Ukraine. In the U.S. Congressional Serial Set, 1817-1994, within the document titled “Soviet Total War – ‘Historic Mission’ of Violence and Deceit – Volume I” [85/1 12017 H.Doc 227, p. 723], we find “Russia’s two histories” described as a tension between “Russian state imperialism” and “lawless bands of fugitive peasants” which resisted czarist control even as their conquests consolidated the territories that would become the Soviet Union.

In their latest incarnation, however, it appears that the Cossack wolves have been domesticated, culminating in their revival as the Russian state paramilitary force they are today. Clothed as much in the romance of conquest as in their distinctive uniforms, the former renegades now serve as the vanguard of Russian nationalist aspirations in the western reaches of the former Soviet Union.

Islam in the Soviet Union: Translated Reports from the Joint Publications Research Service 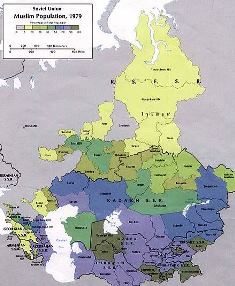 From an earlier release of Joint Publications Research Service (JPRS) Reports, 1957-1994, we recently highlighted five reports concerning religion and atheism in the USSR in the 1960s. The September 2014 release of JPRS also includes translations from the Soviet Union on this same broad topic with particular attention paid to Islam. 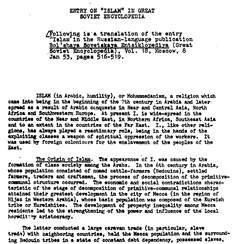 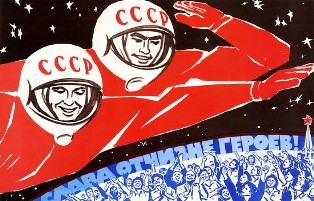 Religion and Atheism in the USSR: Selected Highlights from Recently Released JPRS Reports

The June release of Joint Publications Research Service (JPRS) Reports, 1957-1994, includes a number of topical translations from the mid-1960s concerning religion and atheism in the Soviet Union. Below are five examples:

Need for Special Atheist Courses for Students of Higher Education Institutions (1966)
In this article by a history department professor and his student, the writers argue that it is necessary for university students to be taught a more robust atheism in order to be able to refute the beliefs of sectarians and cultists. It is not enough to be an atheist; a young educated person has to know enough about religion—Christianity—to be able to make a logical argument against it. The authors suggest that comparing what is written in the gospel Mark to what is said in Matthew and Mark about the same instance will act as a wedge. The believer must choose among apostles as to whom to believe. Thus is doubt provoked. Knowing these “little things" about religious doctrine and practice can be more effective in winning the argument than “the most extensive discussions on general themes."

What do the hydrodynamics of dolphins[1], the philosophical quandary of extra-terrestrial life[2], and Soviet experiments to detect emotions[3] have in common? Need a hint? It’s the same thing that biographies of Anwar Sadat[4] and Zhu Rongji[5], who became the fifth Premier of the People’s Republic of China, and an article by Chairman Mao’s cook[6], have in common. They are all found in the Readex digital edition of Joint Publications Research Service Reports (JPRS)—an English-language archive of translations of foreign scientific, technical, and social science materials.