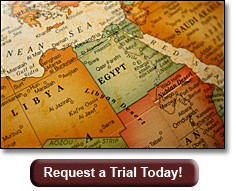 Since 1941 the U.S. Foreign Broadcast Information Service (FBIS) has been recording, transcribing and translating intercepted radio broadcasts from foreign governments, official news services, and clandestine broadcasts from occupied territories. Now a comprehensive digital edition of this unique archive is available for students and scholars of world history and political science.

The historical precedents to topics in today's headlines from Libya, Egypt and the Middle East

Unique insight into events from every region of the world