The July release of The American Slavery Collection, 1820-1922: From the American Antiquarian Society contains a review of the debate before the Virginia Legislature on the abolition of slavery, a defense of the Methodist Episcopal Church’s position on slavery, and an essay interpreting the liberal philosophy that inspired the U.S. Constitution through the lens of religion. 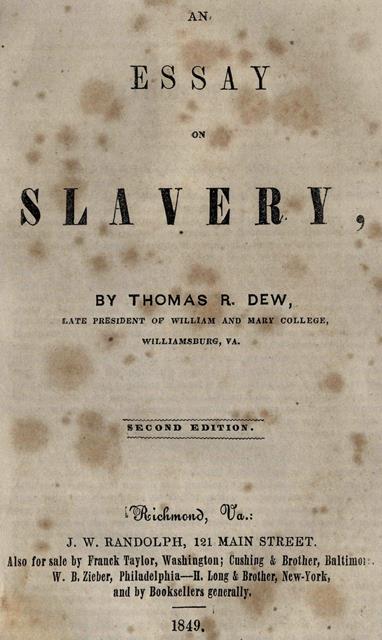 Thomas Roderick Dew was an educator and writer who served as the 13th president of the College of William & Mary. In 1832, Dew published a review of the debate in the Virginia legislature on the merits and ramifications of the abolition of slavery following Nat Turner’s slave rebellion.

Dew favored the continuation of slavery, arguing that laws should not be changed in the aftermath of a crisis:

Any scheme of abolition proposed so soon after the Southampton tragedy, would necessarily appear to be the result of that most inhuman massacre. Suppose the negroes, then, to be really anxious for their emancipation, no matter on what terms, would not the extraordinary effect produced on the Legislature by the Southampton insurrection, in all probability, have a tendency to excite another?….Waiting, then, one year or more, until the excitement could be allayed, and the empire of reason could once more have been established, would surely have been productive of no injurious consequences; and, in the mean time, a Legislature could have been selected, which would much better have represented the views and wishes of their constituents on this vital question. 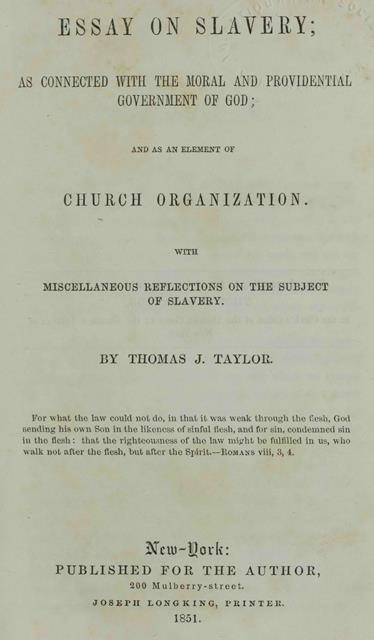 Essay on Slavery: As Connected with the Moral and Providential Government of God; and as an Element of Church Organization (1851)

In this work Thomas J. Taylor attempts to defend the Methodist Episcopal Church’s position on slavery and the practice of continuing to welcome congregants who own slaves while denouncing others. In response to the charge of his church and its members taking a pro-slavery position, Taylor begins by criticizing his opposition as radicals:

In the recent agitation of the abolition question (which is one with which we sympathize, when restricted to the proper limits,) the leaders of that movement, in its ultra form, together with those who follow in the wake, have seemed to feel and act as if they thought they had a special mission from God to denounce—not only as thieves and robbers, but as the synagogue of Satan, and many other like grave charges—those churches, and the members of those churches which, as an evil, tolerate the relation as in agreement with the Scriptures.

Taylor then claimed, in the context of an inheritance, that “the laws of the State, with regard to slavery, do compel a man to become a slaveholder or owner.” He then explained the predicament in which such a congregant would find himself:

It is urged, if the law has forced me into slavery, I can liberate the slaves, and thus secure their freedom. Should we allow this, for the sake of argument, it does not help the objection an iota. For it does not show how I may keep out of the difficulty or connection; but how I may get out when once involved.

And besides, my liberating them is somewhat problematical. I can do it, having the means to remove them to a free State; otherwise my doing so may not secure their freedom; they being liable for the want of such removal, to be taken up, and sold the next week, or month, or year, into perpetual bondage, and myself in the mean while responsible for their support and good behavior.

Another evil, and one among the greatest belonging to the whole system of American slavery, and for which it is so justly denounced, must be inflicted by the liberation and indiscriminate removal of the slaves to a free State;—the separation of husband and wife, parents and children. 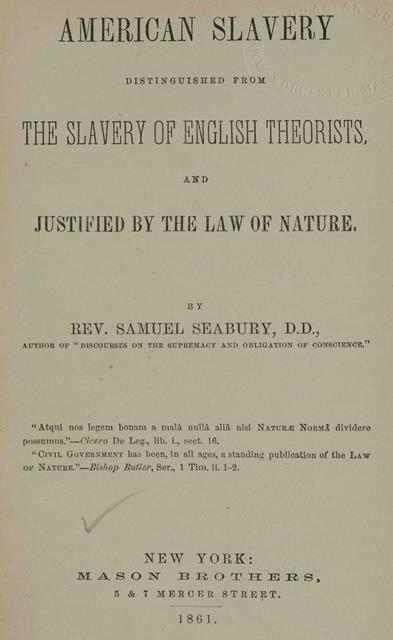 American Slavery Distinguished from the Slavery of English Theorists, and Justified by the Law of Nature (1861)

Reverend Seabury readily acknowledges that the Establishment Clause of the constitution neither supports nor prohibits any specific religion, but he concludes “it would be a great mistake, however, to imagine that this wise provision…was intended to affect an absolute severance between government and religion.”

The law of Nature, or the law founded in the relation of creatures to one another and to their Maker, is the foundation of all just human laws; and the belief of its divine authority and sanction is the most efficacious motive to the observance of these laws, and the most enduring bond of human society. This divine law, the obligation of which has been confessed in all ages and all countries, in opposition to which all human laws are nugatory, and the belief of which underlies every variety of religion, is undoubtedly assumed by the Constitution as the basis of the government which it creates, and the limit of its powers.

Later, Seabury shares these thoughts on the meaning of liberty.

Liberty sometimes denotes the habit of virtue and rectitude. Thus we say, that “the service of God is perfect freedom,” or liberty. The opposite of this liberty is habitual pravity, and is said to be slavery in a figurative sense, because its subject is under the dominion of his lusts and passions….nor can I conceive of any sort of liberty to which it can be reasonably pretended that slavery is opposed, unless it be bodily liberty or civil liberty.

Seabury then turns his attention to the term slavery, quoting John Locke’s definition of slavery as “the absolute and arbitrary power of another to take away his life when he pleases.” Seabury claims:

And in this sense all that Mr. Locke says about slavery is very true; but in this sense there is no such thing as a slave in the United States.