For more than a century historians have regarded The Evening Star as the newspaper of record for the nation’s capital. Published under such titles as Washington Star-News and The Washington Star, this long-running daily afternoon paper was one of the highest profile publications in the nation.

From its earliest years, the Star was a conservative powerhouse, not afraid to buck Washington’s prevailing political winds. Prior to the Civil War, as abolitionists decried slavery in their own publications, the Star endorsed it. During the War itself, the Star’s excellent reporting increased its popularity; even today Civil War historians frequently cite Star articles at length. By the mid-20th century—a period marked by McCarthyism, landmark Civil Rights legislation and the beginning of the space race—the Star reached its zenith in local circulation and national influence. Between 1944 and 1981, Star writers, reporters and cartoonists accumulated 10 Pulitzer Prizes.

This 11-page e-book examines the history and significance of an often-overlooked but deeply influential American newspaper. Fill out and submit the information requested in the right column to immediately download your free copy. 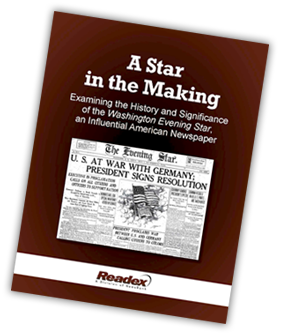 Submit the information below to
receive your free copy