“Be Not Partaker in the Sin”: The Language of Abstinence in 19th-Century Abolition and Temperance Texts

With deep roots in evangelism and a heavy focus on boycott, negative action, and righteous rejection as the means of social improvement, the temperance movement and abolitionist movement of the 19th century were undertaken with some of the same religious arguments. The collaboration between the two is widely known, but the mechanisms beyond religious motivation are deserving of further exploration. Despite a widespread sense in the North (and a nearly universal one in the South) that these movements should be carefully separated (Carson 660), temperance continued to overlap with abolitionism. The heart of this collaboration may be revealed by exploring the language of archival primary documents printed by abolitionist societies. Suffused with the language of boycott and purity, these texts, which are taken from the Readex database of Afro-Americana Imprints, 1535-1922: From the Library Company of Philadelphia, reveal a concern with maintaining middle-class values of abstinence through refusing the touch of slavery with the same fervor that a virtuous citizen might refuse tobacco or alcohol. I suggest the application of sociological temperance theory to the literary analysis of anti-slavery documents published from 1845 to 1861. Through this lens, I identify the correspondences between the two movements as results of a middle-class preoccupation with performative refusal, and I propose that this understanding forms a vital underlying component of the 19th-century activist voice. 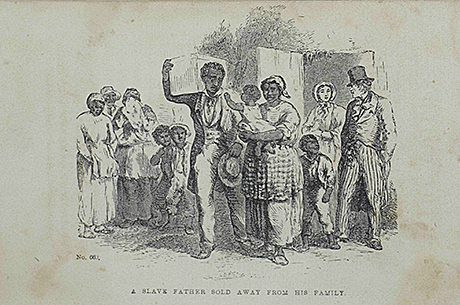 From The Child’s Anti-Slavery Book.
Click to open full page in PDF.

Famous abolitionist voices like John Greenleaf Whittier and William Lloyd Garrison placed drunkenness on an equal footing with open rejection of the abolitionist cause (Thompson 238). Partly due to their double support, the assumption was often made that those in favor of abolition were also interested in temperance, a concern of target audience which evidences a focus on the evangelical middle class as the abolitionist core. Additionally, the language of abstinence, refusal, and moral purity suffuses the subtext. This mode of phrasing was familiar to temperance advocates as the movement’s rhetoric shifted from moderation to total rejection through the middle of the 19th century, and it became an important tonal component of abolitionist documents—just as Reckner and Brighton have traced their appearance in anti-miscegenation fear-mongering (66, 69). Here, I trace both trends toward conflating abstinence from intoxication with abolition of slavery through the printed material culture of the anti-slavery movement in the middle of the 19th century, finding that this feature of activist thought in the period problematically cast the slave and his or her labor as the substance of sin. 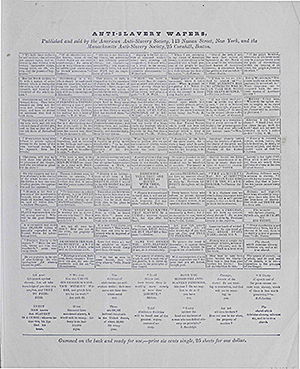 Perfectly poised at the century’s center and a decade before the Civil War, the “Anti-Slavery Wafers” were published for use of the Massachusetts branch of the American Anti-Slavery Society in 1850. This pre-gummed sheet of 98 simple printed phrase stickers, sold singly or in packs of 25 for use as letter seals, exhibits the coexistence of temperance advocates and abolitionists in distributing their messages. Characteristic abolition messages predominate among the wafers, including both attributed quotes and unattributed mottoes:

“Of all the slaveholders under heaven, those of the United States are the most reprehensible; for never is man so truly odious as when he inflicts upon others what he himself abominates.” —Rushton

Love God above all, and thy neighbor as thyself, and slavery would disappear from the earth. (emphasis in original)

Coexistent, however, are temperance messages:

Total Abstinence Societies will be found one of the greatest regenerators of society.

These temperance messages comprise three of 98 stickers, or slightly over 3% of the document—a small but unacknowledged and therefore telling inclusion. The clear assumption of the compiler is that those who espoused an abolitionist stance would also wish occasionally to vouch for temperance as they mailed their post.

The Anti-Slavery Alphabet.
Click to open full page in PDF.

However, the joining of these moral imperatives in the public consciousness often is not nearly so explicit. Even in clearly abolitionist works, the rhetoric is sometimes that of boycott and restraint, hinting at a conflation in the abolitionist mind between refusing two social ills with corrupting moral effects. “Be not partaker” in slavery, the “Anti-Slavery Wafers” command, while a quote by Gerrit Smith on the same sheet recommends “abstinence from the products of slave labor” (emphasis in original). Similar language is found in The Anti-Slavery Alphabet, an 1847 volume for children, which is not explicitly a temperance text but begins the teetotaling messages young:

And you can refuse to take
Candy, sweetmeat, pie or cake
Saying “no” – unless ‘tis free –
“The slave shall not work for me.” (Townsend and Townsend 1)

While the explicit allusion of this advice is to a decades-long history of sugar boycotts in regard to slavery, the refusal of luxuries was, then and in the 1840s, a public statement of negative action built around a narrative of virtuous abstinence. 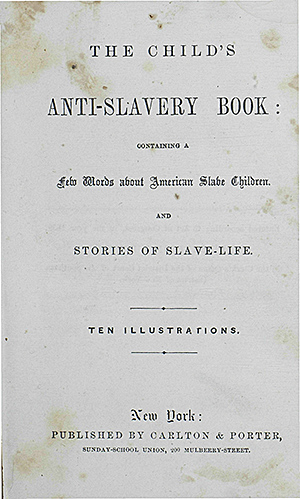 Like sugar, tobacco is to the Alphabet’s authors “a poisonous and nasty thing” (13). Why, though, is the leaf “poisonous and nasty”? In part, the reasoning lies in that tobacco plants are “raised by slave labor too,” but the correspondence with temperance ideals is clear. The “Devil’s Weed” had gained power over the temperate imagination during the 1830s and 40s (Reckner and Brighton 67). It was fully established as a focus of proscription efforts by the time the Townsends composed the Alphabet. A few years later, the preface of 1859’s The Child’s Anti-Slavery Book made a more extreme piece of advice to young readers: “Let your purpose be, ‘I would rather beg my bread than live by the unpaid toil of a slave’” (16). It was unlikely that any child given this book could conceive of begging for bread. This relatively lengthy illustrated volume would have been given to the offspring of wealthier families than those who could only afford The Anti-Slavery Alphabet, and its preface is addressed to “little free-spirited readers” with a confident book-derived knowledge of white revolutionary history, children in a comfortable middle-class environment: “Kind parents watch over you with loving eyes; patient teachers instruct you from the beautiful pages of the printed book” (9-11). Nonetheless, its directive is toward public refusal to benefit from slave-derived luxuries, a performed boycott out of the mouths of babes. This consistent focus on the products which were sometimes harvested by plantation hands hints at a morality supported by the imperative toward resisting a product of immorality, which might corrupt the purity of one’s moral fiber—or that of one’s children. Children, as many a sentimentalist novel reveals, were seen as free from the warping and corrosive effect of such vices as slavery even as they were held to be free from the sensuality that tempted adults to indulge in tobacco and alcohol. Maintaining this freedom as long as possible was a parental ideal which makes its appearance in didactic abolitionist documents quite frequently. 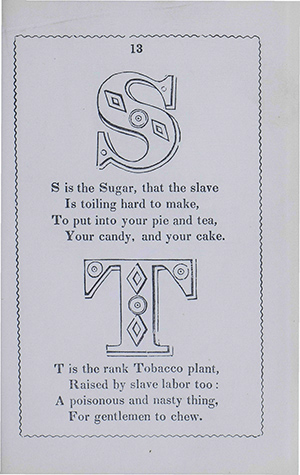 From The Anti-Slavery Alphabet.
Click to open full page in PDF.

Yet a further bridge between temperance and abolition is found in that didactic proscription was itself a middle-class activity: it was the middle-class activist who had the social power to level injunctions (do not keep slaves, do not benefit from slave activity, do not drink or smoke), and this power reinforced the middle class’s moral dominance over those who engaged in the proscribed activity. This occurred even though, as the archaeological record evidences, “the extent to which the rhetoric of total abstinence actually penetrated the daily lives of the American middle class” was limited (Reckner and Brighton 71). The Alphabet supports this social more; S for Sugar goes into “your [the child reader’s] pie and tea,” while T for Tobacco is “For gentlemen”—that is, specifically men of the middle class—“to chew” (13). (Chewing, as opposed to smoking, of tobacco would not typically be found in the upper class.) The chewing of tobacco and excessive drinking of alcohol were simultaneously socially discouraged and reserved for men of means; for the Townsends, it is improper for a gentleman to chew tobacco, but unmentionable for anyone else to do so. This class-differentiated presentation reinforces the trend toward middle-class people of social consciousness condemning the practices they found unpleasant in other strata of society.

Slavery’s case was, admittedly, somewhat different; it is unlikely that an abolitionist would have tolerated a slight habit for slave-keeping in an otherwise scrupulous man, as a temperance activist might have tolerated mild social drinking in an upright person (though some sentimentalist novels could perhaps be accused of excusing the virtuous slaveholder, like Mrs. Shelby or Augustine St. Clare in Uncle Tom’s Cabin, in similar terms). Additionally, it is highly problematic that a human being, an enslaved person, could be refused with the same moral self-satisfaction on the refuser’s part that would be directed at a canister of pipe tobacco. However, the denigration directed toward the slaveholder did serve a similar purpose of re-drawing class boundaries.

In sociology, temperance theory describes a middle-class pressure to “reassert status boundaries as markers of respectability,” especially in times of economic change, by creating an environment of moral judgment directed at the personal activities and choices of those who are viewed as less desirable by that middle class (Cao and Maguire 189). The social practices described by temperance theorists illustrate a trend toward performative separation, via loud and visible abstinence and condemnation, from a denigrated group—a trend which was present in 19th-century temperance as it was in the “new temperance” of the 1990s. In this environment, it is no surprise that the overlapping middle-class cultures of temperance supporters and abolitionists employed the same empowering rhetoric of abstinence and refusal, maintaining these stances to address two social issues that appeared to them both degrading and offensive to the American people as a whole.

Douglass, Frederick. Narrative of the Life of Frederick Douglass, An American Slave, Written by Himself. 1845. N.p.: Project Gutenberg, 2006. Kindle file.