past president of the Costume Society of America, Northeast Region

past president of the Costume Society of America, Northeast Region

Cinnamon, nutmeg, claret, coffee and chocolate are not just spices or beverages; they were adjectives commonly used in the 18th century to describe the color of cloth. Easily visualized today, colors like cinnamon and coffee help us form a picture of goods on the shelf of an 18th-century New England shop.  As a costumer specializing in the accurate reproduction of Colonial Era clothing, I have found Early American Newspapers an invaluable reference source on early American garments. 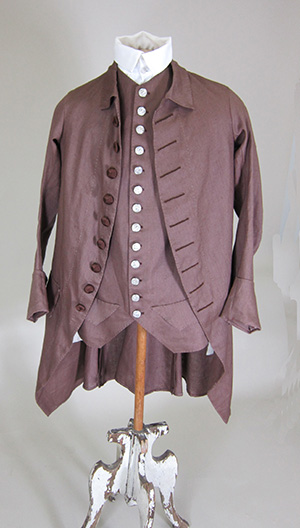 When studying Colonial Era clothing, naturally the primary source is the original garment. As a first step in the research process, nothing can compare to personal examination of an extant artifact.  From these we can learn how the 18th-century tailor or seamstress constructed the garment, what thread and sewing stitches were used, how the clothing fit on the body, and the textiles used in construction.

As a second step in clothing research, 18th-century portraits should be examined. Oil paintings enable us to see clothing as it was worn, accessories used, changes in fashion, and the physical posture of the 18th-century woman or man. Also we are often able to know who the sitter was, where they lived and when the portrait was painted. 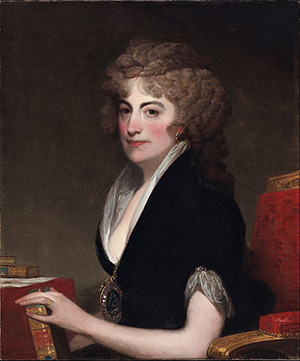 Both of these information sources—extant artifacts and period portraits—have disadvantages as well.  Clothing that survives from the 18th century is almost always the most expensive and the finest of the fine.  Families in possession of such clothing tend to save the most beautiful or oddest items, not usually the clothing of daily wear.  The common garment has to survive being eaten (if it is made of wool), or chopped up to make paper (if it is linen), or recycled into something else entirely over the years.  In addition, the earlier collecting bias of curators at museums and small historical societies impacted the survival of 18th-century clothing.  Although today everyday garments are sought after and treasured by museums, it is too late for many humble pieces.  Similarly, 18th-century portraits most frequently paint a picture of the rich, leaving out the majority of the population, including the working classes who couldn’t hire artists.

Early American Newspapers helps by not only filling in missing information about the working class clothing we can no longer see, but also by telling us what was available in the consumer marketplace of Colonial America.  As seen in the following examples, two types of newspaper advertisements are of special value to costume research: those placed by merchants and those placed by individuals seeking the return of runaways. 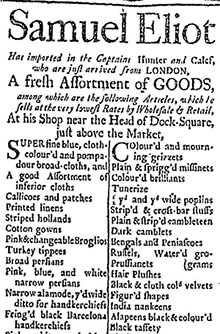 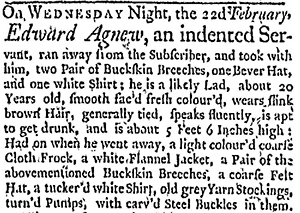 There is a misconception that most cloth in Colonial America was diligently spun and woven by intrepid and hard-working local women sitting at their spinning wheels.  What is often not understood is that a vast amount of fabrics were imported into America.  Shipped from England and advertised in the newspapers, the variety and quantity of fabrics is quite staggering.

Merchant advertisements list the goods being brought into port.  From nails to needles, advertisements provide detailed lists of merchandise available.  Early American Newspapers allows a search of these ads by location, date and multiple keywords.  As an example, broadcloth was one of the most frequently used fabrics in the construction of men’s clothing during the 18th century.  A heavily fulled, wide (54-60 inches), dense fabric that wore like iron, it was one of the most important exports of England and one of the most frequently advertised imports into America.

A simple search for “broadcloth,” limited to the state of Massachusetts during the years 1764 to 1774 brings up more than 200 results, including this one: 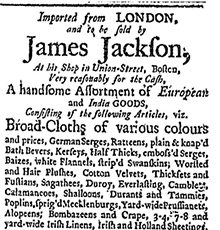 Merchant ads often list location (“opposite Mr. Scott’s Irish Linnen Store”), terms of purchase (“cash only”), and other advertising hooks (“suitable to the season”) to lure customers into their shops.

An advertisement appearing in the Boston Post Boy on 10 June 1765 lists “a large assortment of superfine Broadcloths with a variety of inferior cloths.”  This ad clearly indicates that more than one quality of Broadcloth was available to the consumer. Would a seller today use the word “inferior” to describe any product?

Colonial advertisements rarely used product images, so words had to get buyers into the shop. In addition to price and quality, color was almost always a descriptor, as seen in this text from the Massachusetts Gazette on 5 June 1771:

Everyone knows the color of peas, grass and white. Even claret is still easily visualized today. But this ad throws a couple of color curve balls.  Mazerine? Wilke’s Blue? The color of mazerine I discovered is a deep blue color, named for Cardinal Mazerin in the 17th century. But what color was Wilke’s Blue? (I am still looking for a source that will answer this question.)

Some challenges do exist when reading 18th-century merchant advertisements.  For example, spelling is not standardized, and creative and phonetic spelling is commonplace. “Beaver” can be found as “bever,” and linen can also be spelled “linnen” or “lining.” In addition, Colonial Era type fonts use the long S as an f, altering stripe into ftripe and Russia into Ruffia.  It just takes a little practice to read fluently! 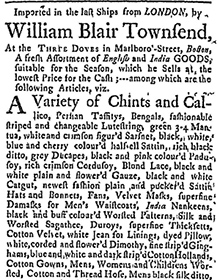 The terminology of items for sale can be confusing to the modern reader: Bengals, Persian, lutestring, sarsnet, and ducape are all fabrics.  A dictionary of 18th-century textile terms as well as a contemporary 18th-century dictionary are helpful tools for understanding the long lists of merchandise.

Advertisements from masters seeking the return of runaways are especially useful to historical costumers.  These ads for missing apprentices, slaves, sailors and indentured servants often not only include detailed descriptions of the runaways’ personal appearance, but also often what they were wearing when they left and any articles stolen from the owner. 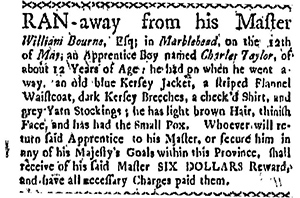 Narrowing the same search for “broadcloth”—that is, within advertisements in Massachusetts between 1764 and 1774—with the additional keyword of “coat” returns such results as:

“He carried off with him a blue Broadcloth Coat and Waistcoat”
(Source: Boston Post Boy, 20 March 1789, about an indentured servant)

With the detailed descriptions of cloth type, color and garment in these advertisements, it is possible to create simple databases revealing the most common colors of clothing.  A sampling created from the search above indicates that blue was the most frequently cited color of broadcloth coats worn by runaways in Massachusetts, followed by “light colored” and cinnamon.  This sort of detailed analysis, on a larger scale, can bring to light previously hidden details of everyday clothing.

Early American Newspapers is an invaluable resource for investigating the clothing of the past.  It allows us to visualize individuals from across the economic spectrum in Colonial America as well as shops stuffed with a vibrant variety of imported goods for the “middlin” and upper classes as well.  When combined with extant garments and portraits, the data found in the advertisements adds an important third layer of documentation for the costume historian.

Hallie Larkin specializes in costume research of Colonial New England and reproduction of museum quality 18th century clothing. She is past president of the Costume Society of America, Northeast Region. She is also owner of "At the Sign of the Golden Scissors,” a website created to provide the most accurate goods for the 18th century re-enactor, whether on the field or in a museum setting.