Originalism in a Digital Age: An Inquiry into the Right to Bear Arms
Nathan Kozuskanich

"More Than I Ever Expected" - A Conversation with Jutta Seibert, Villanova University
Amanda Mottorn

100 Years Ago in Baseball: Dead Balls, Spitters and No-Hitters

For baseball fans, 1908 is a year to remember. That September, in a pennant race that has not been replicated since, four teams in the American League were separated by a only few percentage points. For three teams in the National League, the race to the World Series was even closer. 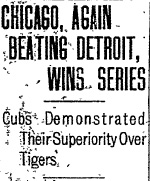 The season came down to the very last weekend. In the American League, Detroit barely held off Cleveland and the Chicago White Sox to clinch the pennant by the smallest margin of victory in baseball history—.004 percentage points. In the National League, a miscue of mythical proportions helped decide the pennant: in a game between the Chicago Cubs and the New York Giants, Giant rookie Fred Merkle failed to tag second and nullified his team's winning run. A season-ending playoff game ensued, and—anomaly of all 20th-century anomalies—the Cubs took the game from the Giants and proceeded to go on to beat Detroit and win the World Series for the second straight year.

The excitement of the pennant race—and the entire 1908 season—should have been at least partly due to a major change in the way games were scored. Previously, if a hitter advanced a runner on a sacrifice, he was credited with an at bat and the out counted against his batting average. With the rule change, though, hitters were not charged with an at bat if a run scored on their sacrifice. The change was supposed to encourage run scoring and improve players' averages (because they were not charged with an at bat). Unfortunately, the rule did not have the effect one would have imagined. Rather than move run production firmly into the 20th century, it seemed instead to usher in the peak of what's now known as the "dead ball era:" a period characterized by low-scoring games and a lack of home runs. 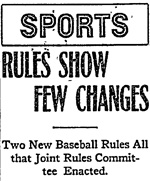 The sacrifice fly rule should have boosted offense and been a major change in game strategy, but in fact it seems to have had little impact—and wouldn't for quite some time. Because the sacrifice fly was not regarded as an official category of statistics until 1954 (before that, it was lumped together with sacrifice hits, or what are usually considered bunts), it's hard to imagine the mindset of players and managers when the rule was new in 1908. We do know that the task of offense has always been to create runs. Most contemporary productive RBI hitters will say that with less than two outs and a runner at third, their goal is to get the runner in by getting a pitch that they can drive hard. Home runs sometimes happen this way serendipitously, because the hitter is simply trying to hit the ball hard and far. Apparently, this philosophy was long in coming to the minds of hitters in the early 20th century.

In addition to the sacrifice fly rule, other changes in the game contributed to the dead ball era, most significantly those in pitching. 1908 was the greatest year for pitching in this history of baseball. Or, depending on your perspective, it was the worst year—ever—for hitting. The American and National leagues had a combined batting average of only .239—the second lowest in modern baseball history. There were six no hitters, and seven pitchers had all-time lowest earned run averages (ERAs). Cleveland's Addie Joss led both leagues with a microscopic 1.16 ERA, barely eclipsing an aging Cy Young's mark of 1.26. He also pitched a perfect game—some say the most perfect game in baseball history—in which the opposing pitcher, White Sox Ed Walsh, struck out 16 and gave up just four hits and one run in a game decided in the bottom of the ninth. There seems almost no comparison between modern day baseball and that of 1908. Slugging percentage was .304 in 1908; in the 1980s, it averaged over .425. On base percentage was .294 in 1908, while today it averages over .330.

The pitching feats of 1908 are even more amazing when one considers that they took place in an era where baseball owners were notorious penny pinchers and cared far more about turning a quick buck than protecting their investments. When teams came into town, crowds flocked to see match-ups of the stars, and owners—and managers—tried to provide a star marquee, no matter how many days prior the pitcher had previously started a game. The star pitchers worked hard: Ed Walsh won 40 games in 1908 and in the process compiled the year's most saves, most complete games in the American League, and most batters faced, while starting 49 games and pitching 464 innings. Christy Mathewson led the National League in wins (37), games (56), complete games (34), and innings pitched (391). By contemporary standards, where starting pitchers are closely tethered to pitch counts and teams are often measured by the quality of their bullpens in order to save starters from burnout, this might well be the equivalent of torture.

The first 20 years of the 20th century belonged to the pitchers in part because the rules—and the soft, dirty, and ragged game ball—were on their side. When home plate was expanded in 1900 from a 12-inch box to a five-sided object 17 inches across, the strike zone was automatically expanded by five inches. Offense plummeted. Some thought the game improved for the better, making for tighter, sharper defense and tougher base running, but others sympathized with the hitters and longed for a game with more scoring. In 1908, the league responded by instituting a rule that today would seem a granted: pitchers could no longer soil the ball by rolling it in the dirt and grass before putting it in play. Soiling the ball made it harder for the hitter to see while simultaneously making the ball easier for pitchers to grip and to curve. 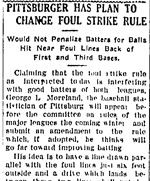 There was also a new rule that the home team had to supply three new balls at the start of every game, but when these were destroyed or lost the home team could supply balls in whatever condition they pleased. Balls hit into the stands were retrieved and returned to play whenever possible, and if a fan tried to keep the ball as a souvenir they could be hauled off by the police and charged with larceny. It wasn't until a court case in 1923 that it was ruled that balls hit into the stands were the property of whoever was lucky enough to nab them, which then forced home teams to supply unlimited new balls.

But even the new ball rules didn't prevent pitchers from greasing the ball with spit in order to make it dance, dip, and behave erratically on its way to the plate. Saliva (or petroleum jelly, oil, etc.) applied to fingertips or directly to the ball produces less friction when the coming off of the pitcher's fingers, and therefore creates less spin. In 1908, covering the ball with whatever substance the pitcher felt was to his advantage was not against the rules, just as long as he didn't roll it around on the ground.Neither was cutting the ball or using a foreign object to rough up its surface. Hall-of-Famer Ed Walsh—one of the great spit-ballers of all time—amassed the bulk of his 195 victories in a short stretch of seasons between 1906 and 1912, at the height of the dead ball era. Walsh also proved that though the pitches were "trick," the pitchers nonetheless threw hard. He is just one of the many star pitchers of the era who we can point to as an example of a short career due to arm fatigue from working too many games and too many innings. After seven seasons of pushing 400 innings per year, Walsh's arm (like the ball he threw) was dead. Likewise, Mathewson—who pitched the infamous "Merkle" game mentioned above—lost to the Cubs' much better rested "Three Finger" Brown largely because of burnout from over-work during the season. 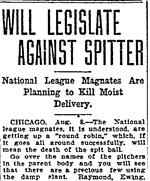 Because of both the lack of fly balls and the strong pitching, home runs were scarce. Ten a year would almost automatically get a player into the home run championship. In 1908, the home run king of the American League was Detroit's Sam Crawford, with seven, and in the National League it was Brooklyn's Tim Jordan, with 12. Nobody hit more than 12 until 1911. With the sacrifice fly rule, one would think these numbers would have increased dramatically, but they did not. Even RBI totals for league leaders hovered around the 100 mark until the 1920s.

A further reason for the low-scoring games of 1908 was the size of the ballparks. When ballparks included an outfield fence at all (enclosed modern parks built of concrete and steel didn't emerge until a few years after the 1908 season), the distances to these outer parameters were astronomical—most well over 400 feet, and some even approached 500. (In comparison, 400 feet is considered a "monster" shot by today's standards.) Home runs were simply not considered an important part of a team's offensive arsenal, especially when they seemed so unattainable.

Therefore, despite their promise of more offense, the sacrifice fly rule and the clean-ball rule had little impact on dead ball era. It was an age of hit-and-run, station-to-station baseball and completely dominant pitching. And while the game of today is sometimes still played in this manner, the spectacle of the long ball has seduced many a fan, team owner, and player into subscribing to former Baltimore Oriole Manager Earl Weaver's famed philosophy that three-run homers are at least 1/3 of what it takes to win.

Weaver was a very successful American League manager who presided over the early days of the Designated Hitter (DH), a rule change of the late 20th century that could be construed as an offensive payback for the dead ball era. In understanding implications of such a rule change, game philosophers like Weaver were visionary (offense after the DH skyrocketed), while those of the 1908 season we may consider to have been stubbornly stuck in a bygone era. Even today, though, there are many who decry the DH and prefer "small ball." With 100 years of critical distance between contemporary baseball and the days of the dead ball era—as well as historical newspaper articles that offer insight into the way baseball was once played—it's finally up to personal taste whether one prefers the micro- or the macro-game. Some like the traditional, low-scoring, tightly played pitcher's duel of 100 years ago, and some prefer the contemporary, high-scoring, wide-open game in which the long ball makes even large deficits surmountable.

From baseball's earliest days, fans, players and owners have argued about the proper level of offense. One hundred years ago, concerns about modest scoring sparked controversies over dead balls and spitters, yet recent debates over steroid use were ultimately about excessive offensive firepower. Both trends ended due to fundamental rule changes. In today's post-steroid era, Major League Baseball is considering another change: a repeal of the designated hitter rule, which would weaken the heavy-hitting offenses that have fostered both criticism and applause for the American League. But among those who love the game, this debate will continue as long as baseball is played.