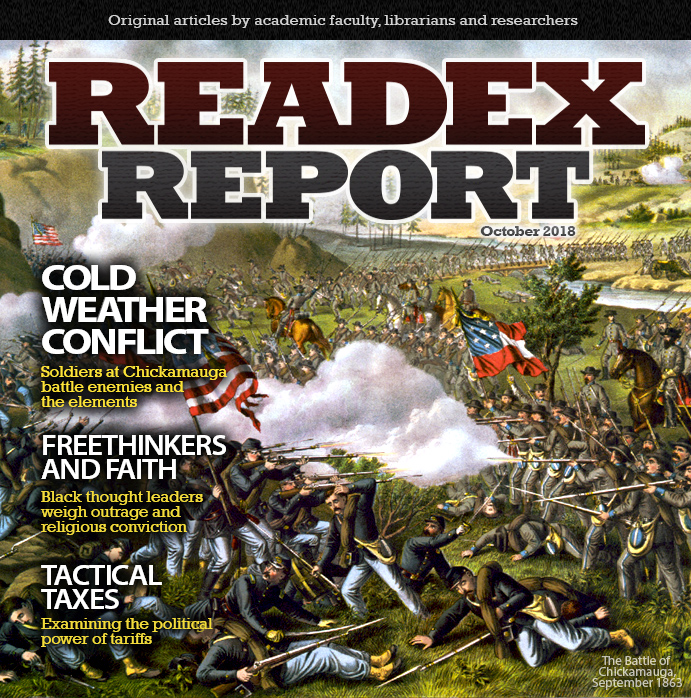 When President Trump first unveiled his tariffs, he issued a Tweet proclaiming that “trade wars are good, and easy to win.” While it is still too early to tell what the overall effect of President Trump’s tariffs will be, advocates of high tariffs during the antebellum period made similar arguments. Tariffs, they argued, protected American manufacturers and protected the wages of American laborers against the pauper labor of Europe. Until recently, contemporary Americans expressed little interest or knowledge in the functions of tariffs. But Americans in the antebellum period seemed to comprehend them. Whenever Congress debated an adjustment of the tariff, newspaper editors lined their columns with the debates and offered commentaries and editorials. Correspondents reported on the legislative maneuvers and parliamentary tricks that congressmen deployed. If a prominent politician such as John C. Calhoun, Henry Clay, Thomas Hart Benton, or Daniel Webster announced that he planned to speak on the tariff, all of official Washington would shut down, and the galleries would be filled to capacity as the audience hung on every word of the distinguished speaker.

During just about every session of Congress from 1816 until the firing on Fort Sumter, efforts were made either to increase or lower the tariff. Congress debated comprehensive tariff bills in 1816, 1820, 1824, 1827, 1828, 1832, 1833, 1837, 1842, 1846, 1857, 1860, and 1861. Many of the plans to modify the tariff passed or lost by only a handful of votes. The Speaker of the House and vice president sometimes had to cast tie-breaking votes on the tariff. President John Tyler vetoed two tariff bills in 1842, and these vetoes brought the economy to the brink of a fiscal cliff. For politicians, however, the tariff became the third rail of American politics—one touched it only at his own peril because a vote in favor of a high tariff would endear someone to protectionists while it would anger free traders.

The tariff played a pivotal role in the presidential elections of 1824, 1828, and 1844. This forced presidential aspirants to try and straddle the issue. When Andrew Jackson ran for president in 1824 he wrote a letter claiming he favored a “judicious tariff.” Before Jackson’s election to the presidency in 1828, his supporters in Congress steered through the Tariff of 1828, better known as the Tariff of Abominations, to secure votes for Jackson in the battleground states of Pennsylvania, New York, and Kentucky. The Tariff of Abominations ensured Jackson’s presidential victory in 1828. Then in 1844, Jackson’s protégé, James K. Polk, wrote his “Kane Letter,” and most newspapers in Pennsylvania published this letter outlining Polk’s opinion on the tariff. Polk suggested that he would maintain the current tariff, which protected Pennsylvania manufacturers. But as president, Polk accomplished a drastic lowering of the tariff and double-crossed Pennsylvania voters. 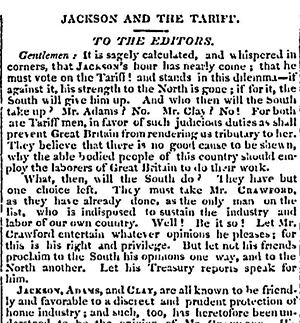 While the tariff served as the fulcrum of the American economy, it also helped to draw more and more Americans into the democratic process. Whenever it appeared that Congress would commence a debate on a new tariff, the people held public meetings, drafted memorials, and sent petitions and memorials to Congress. Members of Congress groaned that their tables stood on the brink of collapse as a result of the weight of all of the petitions that the people had sent them on the tariff. The debates over the tariff helped to unleash a tidal wave of democracy and drew more Americans into the political process. Between 1832 and 1860 the average turnout rate in presidential elections eclipsed seventy percent.  The public interest over the tariff became most apparent in South Carolina after Congress enacted the Tariff of Abominations in 1828. Anger and resentment over this tariff across the state led it to threaten to nullify national tariffs. Led by Vice President John C. Calhoun, inhabitants of the Palmetto State threatened to secede from the Union because of the oppressive tariff. President Jackson, who recognized that that tariff could help him eliminate the national debt, vowed that the Union would be preserved and even began talking about hanging his own vice president for treason. In the end, Henry Clay offered a compromise and the Union was preserved.

In spite of the importance of the tariff in the decades before the Civil War, historians have neglected this issue. The two major works on the tariff, Frank Taussig’s The Tariff History of the United States and Edwin Stanwood’s American Tariff Controversies in the Nineteenth Century, were published in 1892 and 1903, respectively.  Tariff Wars and the Politics of Jacksonian America (Vanderbilt, 2017) seeks to reintroduce the tariff into the dialogue of antebellum America. It covers the twists and turns of tariff bills in Congress, the motives of the men who voted for and against certain tariffs, the interest of the American people in tariffs, and the political and geographic divisions that the tariff caused. 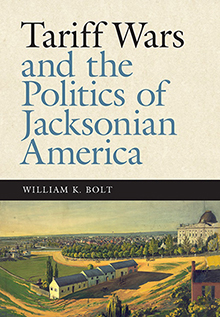 While researching this book I examined over one hundred newspapers. I consulted so many newspapers because I believe that the extensive coverage editors gave to the issue of the tariff demonstrated its importance. By referencing newspapers I tried to prove that the tariff galvanized the public. It was not just elected officials and editors who expressed concerns over the tariff. Ordinary Americans penned letters to the editor on the tariff. I also wanted to show that every part of the country had an interest in the tariff. Therefore, I used newspapers from Maine to Georgia, from Vermont to Louisiana, and from New York to Oregon. The newspaper coverage of the tariff demonstrated that the tariff resonated with the American people and that this issue needed to be a part of antebellum American history just as much as banking, slavery, internal improvements, states’ rights, and the public lands. The tariff fueled the American economy because it typically provided the national government with ninety percent of its annual revenue. With the national government obtaining so much money from the tariff there was no need for direct taxation. 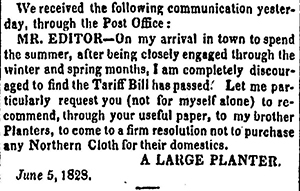 I looked at the tariff issue from 1816 until 1861 using newspapers on microfilm and in online databases. The latter allowed me to cast a much broader net. Readex’s Early American Newspapers, 1690-1922, proved particularly helpful, enabling me to locate digital editions of numerous newspapers that were not on my radar. The search functions allowed me to locate articles on my topic very quickly. For scholars and students interested in conducting research on any aspect of antebellum American history, I would strongly recommend this excellent database. It improved my work and helped to solidify some of my main points.

A native of Buffalo, New York, Dr. Bolt began teaching at Francis Marion University in 2009. He has published articles in American Nineteenth Century History and the Journal of East Tennessee History. For four years, Dr. Bolt served as an Assistant Editor at the James K. Polk Project where he researched, edited, and transcribed documents that have been published in Volume 11 of the Correspondence of James K. Polk. His first book, Tariff Wars and Jacksonian Politics, was published by Vanderbilt University Press in 2017.