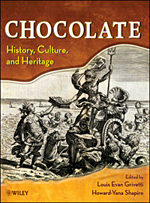 Between the years 1998-2008 my large research team had the good fortune to be funded by a generous grant from Mars, Incorporated, to investigate the culinary, medicinal, and social history of chocolate (1). Our initial research focused on chocolate-related information from Mexico, Central America and the Caribbean, and the transfer of medical-related uses of chocolate into Western Europe. Between the years 2004-2008 our research shifted to the introduction, distribution, and social uses of chocolate within North America. To this end we paid special attention to cacao/chocolate-related aspects of agronomy, anthropology, archaeology and art history, culinary arts, diet and nutrition, economics, ethnic and gender studies, geography, history, legal and medical issues, and social uses.

Our research team drew extensively on Colonial Era and Federal Era documents available through Early American Newspapers, especially chocolate/cacao-related advertisements, articles, price currents, obituaries, and shipping news documents. As a scholar who formerly spent months using microfilm documents—winding and re-winding reels searching for specific documents on specific dates—I report here that the new technologies available through Readex have made my work and that of my students a hundred times easier. Now, with a click of our computer “mice,” team members can retrieve thousands of documents that previously would have taken weeks to amass.

Presented here are examples that provide a brief “taste” of these chocolate-related documents.

Chocolate manufacturing required roasting and preparing cacao beans prior to milling, and fires were commonplace. Boston chocolate-maker Daniel Jacobs lost not only his business but his house:

The building … contained, besides the furniture, provisions, &c. 3,000 lb. of cocoa, and several 100 lb. of chocolate, which were nearly or quite all destroyed. The loss, at a moderate computation, is said to amount to Fire Hundred Pounds, lawful money (Boston Post Boy, March 30th, 1772, page 3).

Lack of adult supervision of children sometimes led to terrible consequences as with this tragic report:

One morning last week a child about 3 years old accidentally overset a large sauce-pan of hot chocolate into its bosom, whereby it was so terribly scalded that it died soon after (Boston Evening Post, December 2nd, 1765, page 3).

Whereas some evil-minded person or persons have again broke open the store of the subscribers, on Spear’s Wharf, and last night took from thence a number of articles amongst which was two firkins butter, about 50 or 60 lb. of chocolate mark’d W. Call, and S. Snow, half a barrel of coffee, nine or ten pair lynn shoes, some cocoa and sugar. (The Boston News-Letter and New-England Chronicle, February 9th, 1769, page 2).

Joseph Mann … sells Chocolate, which will be warranted free of any Adulteration, likewise New-England Mustard, manufactured by said Mann, who will be glad of the Continuance of his former Customers, and thankfully receive the Favour [sic] of others (Boston Post Boy, March 6th, 1769, page 2).

The 1764 Boston smallpox epidemic struck in January and by February a number of chocolate merchants relocated to the periphery of the city to escape the pox. Rebecca Walker, manager of a general store opposite the Blue-ball near Mill Bridge, relocated to Roxbury where she resided at the home of Nathaniel Felton, Scythe-Maker, and sold:

By early summer 1764 brothers John and Thomas Stevenson sought to offset the public’s smallpox fears through creative advertising. They announced that the disease was due to contaminated goods that entered the port of Boston—but if vessels were off-loaded elsewhere and merchandise transported overland, such items would be “free of the Infection of the Small-Pox” (The Boston Evening Post, June 25th, 1764, page 4).

An anonymous pastor identified only as “TW” complained of high prices for food and life essentials. He described his living conditions in 1747 and longed for earlier days in 1707 when he purchased items at inexpensive rates: butter (6 pence/pound), cheese (2 pence/pound), dozen eggs (2 pence), beef and mutton (2 ½ pence/pound), pork and veal (3 pence/pound), sugar (6 pence/pound), chocolate (2 shillings & 6 pence = 18 pence/pound), and molasses (1 shilling & 10 pence = 22 pence/gallon). His concerns documented the importance of chocolate as an expensive but essential dietary item (The Boston Evening Post, December 14th, 1747, p. 2).

An anonymous letter written in 1728 also complained of high prices. He stated that at one time his family of eight needed only 12 shillings/week for food but with current high prices he was unable to supply his family essentials, such as butter, cheese, sugar, coffee, tea, and chocolate and that he also could not afford cider, fruits, liquor, tobacco, or wine. He lamented that his economic deprivations made it impossible to be hospitable and to perform acts of charity (New England Weekly Journal, November 25th, 1728, page 2).

Early American Newspapers includes thousands of shipping news articles, which announced the arrival/departure of ships at the major east coast ports. These allowed detailed economic analysis of the cacao/chocolate trade. Information provided included name and type of ship, master/captain, associated cargo, ports of origin and destination, and sometimes the names of chocolate-related merchants who received the cargos.

[Was] used to grind Chocolate and carry it about for Sale (The Boston News-Letter and New-England Chronicle, June 2nd, 1763, page 3).

John Maxwell, chocolate merchant, died in 1733 and his obituary notice reported a basic inventory of household goods for sale that included:

A Negro Woman, about Twenty Years of age, can do household work and grind chocolate very well; at the above said house (The Boston News-Letter, May 31st, 1733, page 2).

Dorothy Jones and Jane Barnard opened the first chocolate house in Boston prior to the establishment of newspapers in New England. Their petition to the Boston Selectmen in 1670 included the following notation:

To keepe a house of publique Entertainment for the sellinge of Coffee and Chucalettoe (2).

By 1755 Mary Ballard had opened her coffee, tea, and chocolate house also on King Street. Her advertisements also were directed towards wealthy gentlemen, since chocolate was expensive and proper women did not frequent chocolate houses whether in England or North America:

For the Entertainment of Gentlemen, Benefit of Commerce and Dispatch of Business, a Coffee-house is this Day opened in King Street … Gentlemen who are pleased to use the House, may at any Time of the Day, after the Manner of those in London, have Tea, Coffee, or Chocolate, and constant Attendance given by their humble Servant, Mary Ballard (Boston Evening Post, December 8th, 1755, page 2).

Officers and Soldiers who have been in this Province Service may be supplied with … articles on short credit till their muster rolls are made up, as usual, the soldiers being well recommended (Boston Post-Boy, December 15th, 1760, page. 4).

Elizabeth Perkins advertised her political leanings in 1773 when she announced the location of her shop being “two doors below the British Coffee-House, North Side of King Street” where she sold chocolate and groceries (Boston Evening Post, August 30th, 1773, page 4).

George Fechem, chocolate-maker and probable loyalist, announced the sale of his mill and chocolate-related equipment in the fall of 1776:

A good chocolate mill, which will go with a horse and grind 120wt of chocolate in a day. Said mill consists of three good kettles, with twelve pestles in a kettle well leaded, nine dozen pans, one good nut cracker, a good musline [cloth] to clean the shells from nuts. Any Person wanting the same may apply to GEORGE FECHEM, near Watertown Bridge (Boston Gazette and Country Journal, September 9th, 1776, page 4).

Samuel Watts manufactured chocolate near the Boston Prison Yard. During the fall of 1751 unseasonably high temperatures threatened his business and he published the following apology:

By reason of the heat of the weather, he [i.e. Samuel Watts] has been unable to supply his customers with chocolate for these few weeks past, and fears to the loss of many of them (The Boston Gazette or Weekly Journal, October 8th, 1751, page 2).

Thicken the blood [and] relax and weaken the Nerves and Stomach, and thereby hurt the Digestion, & produce Colics, &c (The Boston Gazette or Weekly Journal, March 5th, 1751, page 1).

Our candidate for the first chocolate-related advertisement to appear in a North American English newspaper is the following, although we continue to search for an even earlier account:

To be sold in Boston at the Ware-house of Mr. James Leblond on the Long Wharf near the Swing-Bridge, new Lisbon Salt … also Rum, Sugar, Molasses, Wine, Brandy, sweet Oyl, Indigo … Cocoa, Chocolate, with all sorts of Spice, either by Wholesale or Retale [sic], at reasonable Rates (The Boston News-Letter, December 3rd, 1705, page 4).

Early American Newspapers provides the street names and general addresses for nearly 1,000 chocolate-related establishments in Boston from 1705 into the 19th century (3). An enjoyable educational activity would be to walk the streets of “old” Boston and search out these addresses, identify current ownership and commercial activities, and determine whether or not a chocolate link has been maintained between past and present.

Louis Grivetti is Professor of Nutrition, Emeritus, at the University of California, Davis. He received his Ph.D. in geography (1976) at the University of California, Davis, with complementary training in nutrition and food science. His research specializations include the geography and history of food, edible wild plants and human survival during drought, and diet in antiquity. Professor Grivetti and Howard-Yana Shapiro are Co-Editors of the recently published book Chocolate: History, Culture, and Heritage(Wiley, 2009).