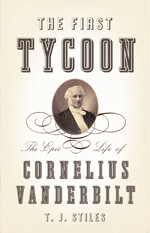 When I set out to write a biography of Cornelius Vanderbilt, a man known by the informal title of "Commodore," I faced one mystery after another. Even though he was one of the richest and most powerful businessmen in American history, he conducted most of his operations in secret. He left no diary, no collection of papers, and carried out many transactions orally, without committing them to paper. But perhaps no period of his life was more bewildering than the Civil War.

Congress bequeathed a gold medal upon the Commodore for donating his largest steamship (the Vanderbilt) to the Union navy—but he did so only after leasing it to the War Department for many weeks, until the bill reached $300,000, nearly a third of what it cost to build. He refused to take any compensation when he organized a massive flotilla to transport an expedition to New Orleans led by General Nathaniel Banks—yet the press was scandalized by stories of decrepit, unseaworthy vessels that he hired for the fleet. It was said that Vanderbilt used an agent who extracted outrageous commissions from shipowners, suggesting the Commodore had received some of the gains as well.

Was Vanderbilt a noble patriot, or a war profiteer? Most histories of the period that mention him list him as an example of the latter, alongside men who sold the government rotten shoes and shoddy uniforms that fell apart in the first rain. Yet Vanderbilt named two of his sons after national heroes (William Henry Harrison and George Washington), and seems to have taken great pride in his country.

Some of my initial research only made things more confusing. Newspaper accounts and the Official Records of the Union and Confederate Navies in the War of the Rebellion showed that the Commodore tried to donate the Vanderbilt at the war's outset, only to be turned down by Secretary of the Navy Gideon Welles. Why would he follow this noble gesture with leasing it at piratical rates?

The answer to this and other questions came from Vanderbilt himself. Congress regularly published the evidence it collected in its various investigations, including testimony given to committee hearings and documents provided by the executive branch. These invaluable volumes of primary sources—the Congressional Serial Set—have been fully digitized and made text-searchable by Readex, a division of NewsBank. Working at the Columbia University library, I was able to search all the incidents of "Vanderbilt" in the Readex edition of the Congressional Serial Set. There were a lot. None were more revealing than the Commodore's testimony about his role in the Civil War.

"The moment a man comes to New York he is surrounded by a lot of thieves all the time, and in every shape and direction," Vanderbilt told a committee of the House of Representatives. When Welles turned down the gift of the Vanderbilt (supposing it to be too expensive to operate), the War Department sought it as a transport for amphibious expeditions on the South's Atlantic coast. But when the department sent its agents to New York, they relied on ship brokers, who took a commission of 2.5% or more.

Vanderbilt called them "outside thieves": men with every incentive to run up the price, and the authority to demand any ship they wanted. The Commodore told Congress, "I would rather sell my ships than let them remain in the government employ until they earn their whole value and then have the ships and the money too."

But a crisis gave him the chance to carry out his original plan. When the Confederates converted the frigate Merrimack into the ironclad Virginia, Lincoln and his cabinet went into a panic. They turned to Vanderbilt. As he explained to Congress, he personally offered the Vanderbilt to President Lincoln, expressing confidence that the rebels wouldn't dare risk the Virginia against it. He converted the massive ocean liner into a warship at his own expense, and piloted it to Hampton Roads, where it helped to bottle up the Virginia in harbor at Norfolk. He sold it to the navy for $1, and converted it into a cruiser to hunt for the commerce raider Alabama.

One mystery was solved. But what about the scandal surrounding the Banks expedition—the secret effort to charter steamships for military transport, which led to a Senate investigation and a motion to censure Vanderbilt? Did the Commodore lease rotten vessels for the government? Did he skim money through an agent? Again, the Congressional Serial Set provided the answers.

It turned out that Vanderbilt leased only one vessel (out of twenty-seven) that was unseaworthy—and that its rotten timbers had been planked over to disguise the ship's true state. As for the scheming agent, one Thomas J. Southard, he had been recommended by General Banks himself. He handled only the sailing ships, outfitting them to carry horses (his particular expertise). Vanderbilt took no pay for his efforts, and he insisted that Southard work for free as well. Unwilling to do so, Southard extracted commissions through highly indirect methods—implying that ship owners must use suppliers with family connections to Southard. Meanwhile he carried out his duties as expected.

If Southard's skimming escaped Vanderbilt's notice, not much else did. He cut out the "outside thieves" he despised, dealing directly with the ship owners. "I believe religiously that he has saved the government fifty percent in fitting out these vessels," the Navy's Commodore George J. Van Brunt told Congress. "He was acting, as I thought, with great patriotism, in serving the government for nothing."

I was ready to indict and convict Vanderbilt of war profiteering, if that's where the evidence led me. Instead, it convinced me that the Commodore deserved his gold medal. Vanderbilt has often been treated with cynicism by historians, who are ready to believe the worst of a staggeringly rich, secretive, and combative man. Certainly I did not set out to rehabilitate his reputation. But I couldn't ignore the evidence—evidence provided in breathtaking abundance by Congress in its Serial Set, now more accessible than ever thanks to digitization.

T.J. Stiles is the author of The First Tycoon: The Epic Life of Cornelius Vanderbilt, published in 2009 by Alfred A. Knopf. Winner of the National Book Award, The First Tycoon was selected as one of the best books of the year by The New Yorker, The Washington Post, The Boston Globe, The New York Times and many more. Also the author of Jesse James: Last Rebel of the Civil War (2002, Knopf), Stiles has written for The Atlantic online, Smithsonian, Salon.com, the Los Angeles Times, among other publications, and taught nonfiction creative writing at Columbia University. He served as historical advisor and on-screen expert for "Jesse James" and "Grand Central," two films in the PBS documentary series American Experience.