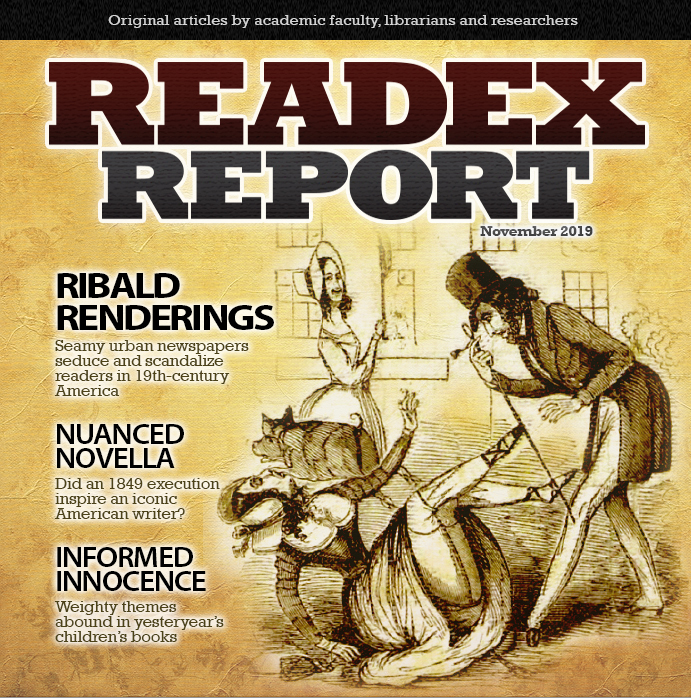 The first of these books comes from Early American Imprints: Series II: Supplement 3 from the American Antiquarian Society. It is aptly titled Peter Prim’s Profitable Present to the Little Misses and Masters of the United States, a picture book of eight leaves engraved and published in 1815 by Scottish-American artist William Charles (1775-1820). 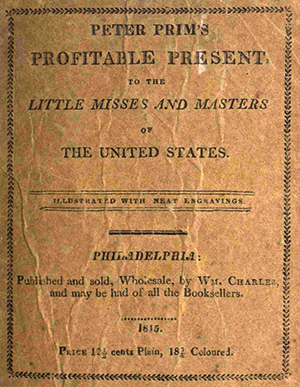 A variation of the nursery rhyme “One Two Buckle My Shoe,” Peter Prim’s Profitable Present emphasizes the importance of young children taking on the rigors of farm work. 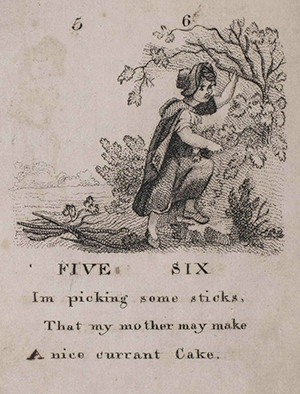 In Charles’ hands, the time-honored line “Five Six, pick up sticks” is changed and embellished upon to become “Five Six I’m picking some sticks, That my mother may make a nice currant Cake”—and the verse is punctuated by a finely wrought image of a little girl of about nine literally beating the bushes for some loose sticks. Both the text and image work together to make the point that a girl no matter how young should be able to gather some wood to help her mother make the fire necessary for baking a cake. 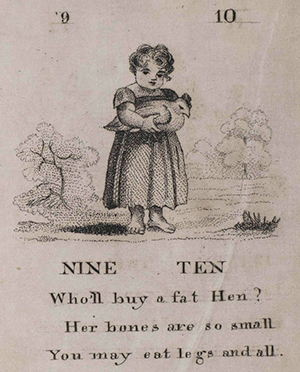 The rhyme for “nine ten” shows a child of about four holding a large chicken. It was common at that time for boys and girls to wear dresses until attending school, making the child’s gender ambiguous. The line below pronounces proudly, “Who’ll buy a fat Hen? Her bones are so small You may eat legs and all.” It is a graphic statement reflecting the child’s businesslike approach to making a profit which seems more appropriate to a farmer than a preschool age child. 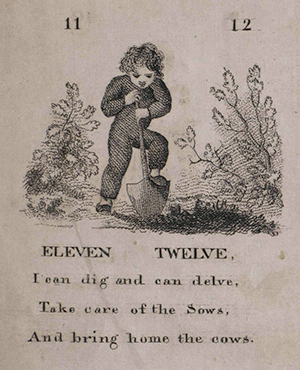 Similarly the illustration for “eleven twelve” shows a boy literally taking on the work of a man; the caption reads, “Eleven Twelve, I can dig and can delve, Take care of the Sows, And bring home the cows.” The boy of about ten is digging with a shovel that dwarfs his little foot.  The illustration has a tongue-in-cheek feel, given that the shovel is just touching the soil and the young digger is flanked by shrubs on either side. Nonetheless, image and text unite to emphasize that this little boy has jobs on the farm he can effectively do.  In cataloging this picture book, I included the subject heading “Counting out rhymes” to link it to other children’s books that contain this poetic approach to building mathematical literacy.

My second selection comes from The American Civil War Collection, 1860-1920: From the American Antiquarian Society. Blandly titled Picture Alphabet by its publisher McLoughlin Brothers when it was issued sometime between 1861 and 1870, this book is a great example of a title that does not reveal much about its actual contents. 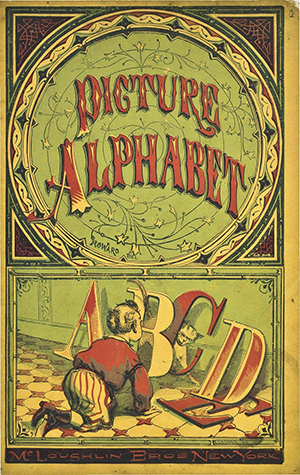 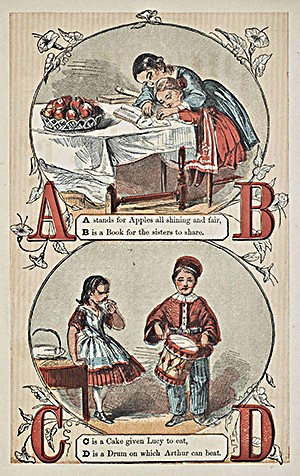 The letter D hints at the book’s agenda: “D is a Drum on which Arthur can beat.” A toy drum was often portrayed in nineteenth-century children’s books as appropriate for a boy, however, this child’s striped pants, button-down jacket and cap give him the look of a young soldier. 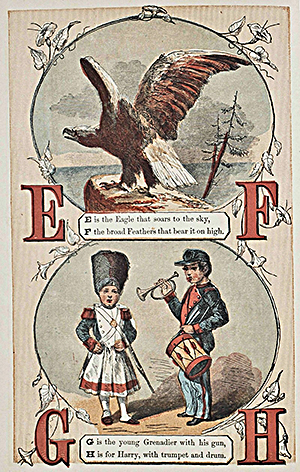 The martial message is made more explicit on the very next page. The letters G and H are presented with the images of a little boy in skirts dressed in soldier’s garb above the waist (complete with bearskin hat) beside a slightly older comrade who sports a small Union soldier uniform and carries a drum and bugle, both instruments used by boys on Civil War battlefields. The caption states that these children are literally playing at war: “G is the young Grenadier with his gun, H is for Harry, with trumpet and drum.” 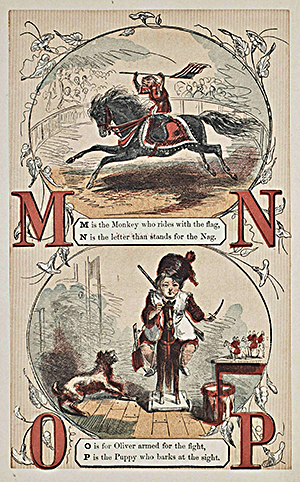 As if that was not enough, “O is for Oliver armed for the fight, P is the Puppy who barks at the sight.” Although the text ends lightheartedly, the little boy rides his toy horse with a look of stoic determination, his rifle strapped to his back and his knife drawn.  To his left are his military drum, and a table set with toy soldiers on horseback poised as if to offer reinforcement as needed. In this brightly colored alphabet, war play is celebrated as a patriotic duty. In providing the descriptors for Picture Alphabet, I assigned the subject headings “Play” and “United States—History—Civil War, 1861-1865—Juvenile poetry.”

My final picture book selection is from The American Slavery Collection, 1820-1922: From the American Antiquarian Society. 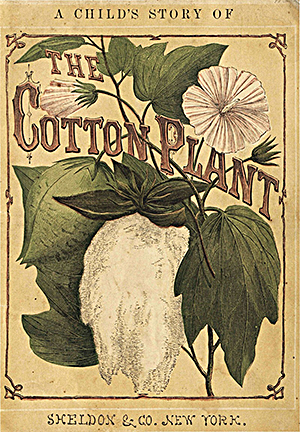 Although set on a Southern plantation either during the Civil War or Reconstruction, A Child’s Story of the Cotton Plant offers no actual images of children working, or children playing to emulate adult work. Issued by New York publisher Sheldon & Company, the book has no imprint date, a common tactic used by picture book publishers to sell a book that looks new, although it might have been stored in a warehouse for several years. The story is told through the eyes of a little white boy named Johnny Robison from New York who goes to visit a cotton plantation in Mississippi owned by his uncle. The text is always careful to refer to the adults and children of color as “servants,” never slaves, so it is quite possible that the text might have been published after 1865. The ambiguity does not end there. The numerous illustrations show the work of raising and harvesting the delightful “coffee-colored” cotton bolls by humbly but neatly dressed adult African Americans. The text mentions that the boys work in the fields, but that fact is not visually present. 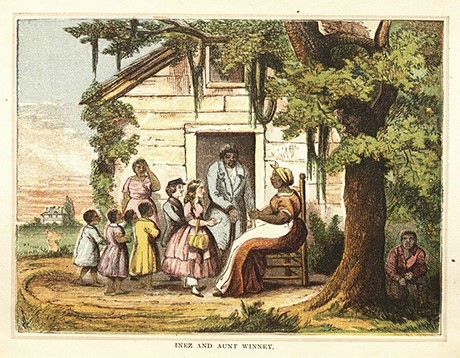 African American children do appear in the book, but as brightly dressed youngsters who follow the white narrator and his female cousin Inez to visit the beloved elderly servant Aunt Winney and her husband Uncle Joe at their cabin.  The children of color emulate the full skirts of their young mistress, but unlike Inez and Johnny they are barefoot, visually signaling their lower social status. 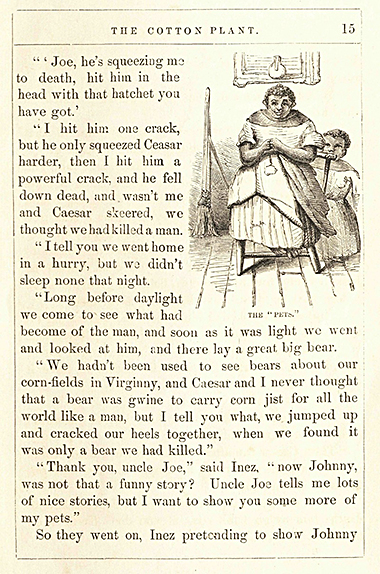 A picture of two young house servants inserted into the text shows them as docile and inactive; the older one sits quietly in a chair, her bare feet visible under her dress, while the child behind her waits patiently. The caption refers to them as “The Pets”—apparently referring to their status as pampered, beloved creatures that are nevertheless regarded as less than human in the plantation hierarchy. 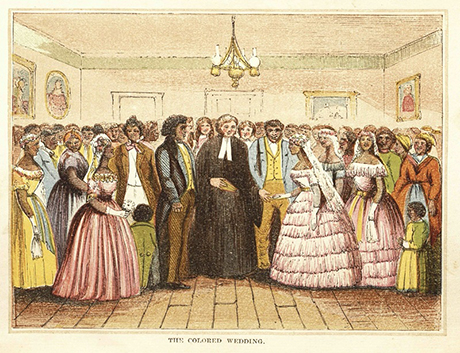 The most stunning image in the entire book is this full-color image of “The Colored Wedding.” The young Northern visitor explains that toward the end of his stay at the plantation his cousin’s nurse Maria was married to her fiancé by the plantation owner’s minister. The illustration of the “The Colored Wedding” is fascinating on many levels. The bride, groom, wedding party, and children of color are all dressed in formal attire that would have been appropriate for their white counterparts; they have the look of having successfully tried on white clothing. The only allusion to traditional African dress is perhaps the turbans worn by the older African American matrons. Although initially the scene might suggest a happy opportunity for racial integration, it is more one of stratification; all of the white members of the Robison Family stand directly behind the minister in a central position of power and privilege, with the African American wedding party and guests flanking the white guests on either side as marginalized outliers. The entire scene looks like it was posed for theatrical tableaux then in vogue in middle class white parlors. In fact the text describes the wedding scene in theatrical terms: “Johnny was much diverted at the odd dresses and queer laughing faces, and says he enjoyed the wedding more than some he had been to in New York.”  Although the book’s text describes the manual labor and specialized machinery underpinning the plantation, the pictures in contrast portray African American children as beloved pets who do not engage in its grinding day-to-day work. In cataloging The Child’s History of the Cotton Plant, I included the subject headings “Cotton growing,” “African Americans,” “Slavery” (although it is euphemistically alluded to in the text), “Weddings,” and “Mississippi.”

These three picture books convey the visually rich children’s print culture produced in nineteenth-century America. They are now widely available through their inclusion in Early American Imprints: Series II, The American Civil War Collection, and The American Slavery Collection. All three of these digital collections include the superb metadata that is the hallmark of cataloging produced at the American Antiquarian Society. This online access brings the modern researcher in more direct contact with these material survivors of the nursery, providing a profound taste of societal expectations for nineteenth century children, with all of the underlying humor, anxiety, and perplexities.

Laura Wasowicz is Curator of Children’s Literature at the American Antiquarian Society. Since 1987, she has worked to acquire, catalog, and provide reference service for the AAS collection of 27,000 American children’s books issued between 1650 and 1899. She is the co-author of Radiant with Color & Art: McLoughlin Brothers and the Business of Picture Books, 1858-1920 (Worcester, Mass.: American Antiquarian Society, 2017).