Dismantling the Minstrel: A Pedagogical Approach

A buffoon is a figure who cannot succeed in his performance without “failing” in his role. In minstrelsy, many of the characters are buffoons whose failure elides the actor’s identity so that blacks are stereotyped as a race that cannot control their behavior and thus become objects of derision. Blackface extends negative perceptions, regardless of the actor’s race beneath the burnt cork, because these roles are meant to reify stereotypes. 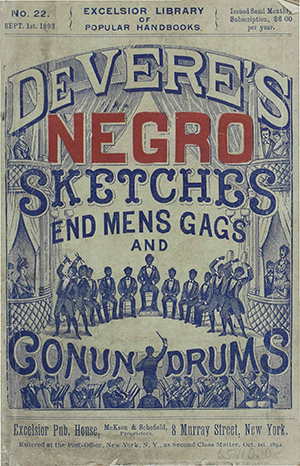 The performances I have chosen for this lesson plan are geared toward the construction of “black” men unable to act seriously. This lesson plan aims to teach notions of blackface as well as the cultural construction of minstrelsy that has incorporated the stereotypes beneath the cork. I have included three transcripts of short minstrel shows from the book De Vere’s Negro Sketches, End Men’s Gags, and Conundrums, which are available in Readex’s online collection Afro-Americana Imprints, 1535-1922: From the Library Company of Philadelphia. These sketches include “Bones as a Legitimate Actor,” “He Would Be an Actor,” and “Dar’s De Money” (a malapropism for “Desdemona”). 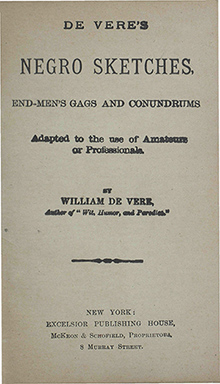 While the instructor can focus on specific examples of stereotypes within each sketch, such as the portrayal of sexuality, he or she can also extend the class discussion to the intertexuality of performativity between the sketches. Specifically, the theatricality of each sketch opens the possibility for buffoonery by demanding the actors to optimize the performance as a visual and aural aesthetic for the audience through stage directions and rhetorical devices. 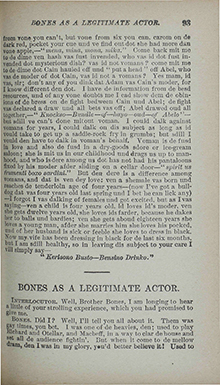 The following lesson plan deals with the sensitive topic of minstrelsy through an intertextual approach, creating a space of learning over both different genres and periods. This lesson plan is recommended for a college-level American literature survey course but can also be used for an African American literature course. This material should cover about a week.

Learning the “Old Way”: The Performance of Failure

Start the lesson with a PowerPoint featuring relevant terms (with images and examples as needed). Here are some suggestions:

The PowerPoint can also feature images of advertisements of minstrel shows and other related materials. 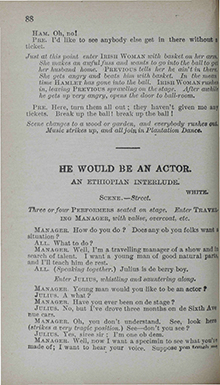 Students need to have read the three sketches in advance so that the instructor can put them either in pairs or groups of three. Each group will analyze a different sketch, focusing on general discussion questions. Additionally, each group should prepare their own open-ended discussion question about its designated sketch for the class since everyone will have already read all three.

1. How is the “brute” stereotype created in the sketch?

3. What specific rhetorical devices (litote, anaphora, hyperbole, etc.) are employed to convey the performance of the buffoon?

4. What is gaze, and who would you define as the gazer versus the gazed?

Finally, the instructor can go to each group with some slips of paper with significant quotes, either in his or her hand or in a container. There will be three stacks so that students will select quotes from only their designated sketch, and then, they will explain the significance of the quote within the context of the sketch and the context of minstrelsy. 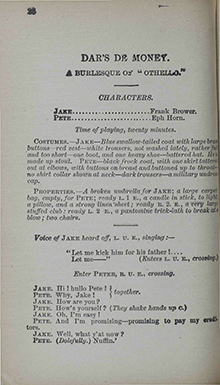 As a visually based culture in the 21st century, teaching literature in conjunction with film can promote a more insightful dialogue about a topic, and constructing this dialogue by making it relevant to the contemporary world can enhance students’ perceptions about both the social conditions that produce a work of literature and the connections that that work may have to our own society. Spike Lee’s film Bamboozled would work as a useful pairing with the sketches from the 1880s because his film satirizes 21st-century depictions of African Americans. Damon Wayans plays Pierre Delacroix, an African American television writer frustrated that his white boss, television producer Thomas Dunwitty (Michael Rapaport), does not like the Cosby-like shows that Delacroix writes, insisting that they are not “black” enough. In retaliation, Delacroix pitches a show that he expects to be so racially offensive that Dunwitty will have to reject it and accept Delacroix’s usual ideas. This plan backfires, and his show Mantan: The New Millennium Minstrel Show, which features black actors in blackface, becomes a sweeping success. Although Delacroix initially expresses outrage, he succumbs to greed, losing himself in the monetary and social success; this loss of self mirrors the erasure of individuality as the actors of the minstrel show become caricatures, and the audience members similarly efface their own identities under the blackface they eventually apply to show their support. Tragedy results from this denial of the American past, showing Lee’s indictment of trivializing our history and forgetting the subjugation of African Americans for the sake of entertainment.

This film should be viewed after a discussion about the sketches so that students can use the original conception of the minstrel to compare and contrast that figure with 21st-century perspectives of it. Students should analyze particularly the effects of an African American presenting himself as a “black actor in blacker face” and the roles that consumerism and product placement play. The film shows minstrelsy as a commodity, which is rendered possible from the propagation of television. The audience has changed—rather than a few hundred people in a theatre, millions of contemporary Americans can view minstrelsy as entertainment and buy objects of the minstrel figure. For higher-level literature courses, the instructor can engage the class by viewing this trend through a Marxist lens.

In addition to the focus on the minstrel as a commodity, the power of gaze is another useful way to address the construction of alterity. Bamboozled raises the question whether the power of creating otherness must be racialized to be racist, especially when the audience, regardless of race, enjoys the show. Although Delacroix instigates the creation of the show and appreciates his success, his creation has turned a glaring eye upon the black man, the 21st-century minstrel. The television only emphasizes this pernicious gaze since more people can stare at the minstrels. Mantan is celebrated as a dancing buffoon; it does not matter who receives entertainment because history points back toward the humor of the figure because he is black.

The instructor can choose whether he or she wants to include the discussion board posts in the class discussion.

Prompt: Write a meaty paragraph (approximately 100-150 words) arguing whether you see iterations of minstrelsy in the 21st century. Thoroughly justify your choice with evidence from music, film, literature, current events, and/or personal experience.

Prompt: Read over your first post, and write two or three paragraphs (approximately 200-250 words) describing whether you agree or disagree with your original decision. Inform your response with details from Bamboozled. Then, read a classmate’s response to the film, and respond to your classmate (approximately 50-100 words), using details from the film to support your response.

The following questions should be asked in class after viewing the film.

2. What role does consumerism play in conjunction to the role of minstrelsy?

3. How does Spike Lee emphasize alterity?

4. Why does Shakespeare appear so often in minstrelsy (both in the sketches and in the film)?

5. How does Bamboozled portray the sexuality of African Americans? Is it the same or different from De Vere’s sketches?

6. What role does profanity play in relation to the minstrel performances? Consider the audition scene in addition to the sketches of the show itself.

Conclusion: Can We Deconstruct Blackface?

Students should address the construction of a society’s values so that they learn how a society is shaped over time. With minstrelsy, they can learn how a seemingly archaic tradition is reified in the 21st century in various iterations. In order to study these changes, we must go back to the original texts and experience the material so that we may discern how the minstrel functions in our society today. Without knowledge of the past as a touchstone, we cannot fully recognize the inequity of the present, nor can we realize its status for our future.