Talking News with Carolyn Cassady: A Conversation with the Matriarch of the Beat Generation
David Whittaker

Avoiding Errors, Fopperies, and Follies: How to be a Good Wife
Elizabeth Hopwood 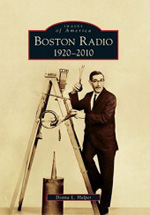 I have been a media historian for several decades, with expertise in the history of broadcasting. For years, I did my research the traditional way, using old magazines, old newspapers, and lots of old microfilm. It was fun, but often very tedious, since few of those materials were indexed, and I had to go page by page to find the information I was seeking. Still, I managed to write three books and a number of articles that way. But as I did my research, I accumulated a long list of unanswered questions. Sometimes I would find an article that mentioned a person or an event well-known in a given city, but not well-known enough to be explained in any resources available to me. I hoped that at some future time I might solve some of those mysteries, so that I could write a more accurate piece and tell the full story.

When database research came along, it proved to be a welcome boost to my work, giving me instant access to publications that I previously could only obtain via Interlibrary Loan, a process that could take weeks. America’s Historical Newspapers has been especially useful, since it includes many newspapers from small and medium-sized cities. That’s important for me because many of the people I could not completely identify came from places like Trenton, Cleveland, New Orleans, Portland and Seattle. I knew some basic facts about my subjects, but I often lacked enough information to understand why reporters thought they were newsworthy. With America’s Historical Newspapers, I was eager to see if some of the questions on my list could finally be answered.

One person I wanted to know more about was Robert S. Stephan. A few years ago, I was researching perceptions of the Golden Age of Radio in various cities, and I summoned some 1934 microfilm of the Cleveland Plain Dealer. Stephan was the newspaper’s radio editor at that time, and I found his columns surprisingly insightful. Unlike some radio reporters of that era, who mainly re-wrote press releases, he was comfortable with the popular culture, and displayed an insider’s knowledge of what went on behind the scenes at the local stations. By searching America’s Historical Newspapers, I was finally able to learn more about his life, and even read all of his radio columns. Stephan was among the earliest radio critics, giving his opinion on the quality of the programs he heard. He also conducted the Plain Dealer’s annual radio poll, asking readers about their likes and dislikes. Proving that some things never change, the main complaint from listeners in the poll’s first year (1929) was that their favorite station had too many commercials. Stephan was only 53 when he died suddenly of a heart attack in February of 1949. He was so well-respected that a tribute to his career was broadcast on station WGAR, and at his funeral, numerous celebrities, including bandleader Paul Whiteman, comedian Jack Benny, singer Al Jolson and radio host Arthur Godfrey sent messages of condolence. Many of them referred to Stephan as a personal friend. Experiencing the Golden Age of Radio through the eyes and ears of Robert S. Stephan enhanced my understanding of early broadcasting.

Another person about whom I had many questions was Bertha Brainard, who became the first woman radio executive at NBC in 1927. Before that, during 1922 and1923, she hosted her own program over station WJZ, “Broadcasting Broadway,” in which she discussed current plays and interviewed their stars. I knew about Brainard’s radio career, but America’s Historical Newspapers gave me some interesting leads on her personal life. For example, I didn’t know she had friends in Duluth, Minnesota. On 13 August 1922, Brainard was the subject of a story in the Duluth News-Tribune, which discussed her current broadcasting work and referred to her friendship with a local business executive and his wife, “Mr. and Mrs. Watson Mendenhall.” I was also able to discover how Brainard first met the man she eventually married--an amusing story about how Curt Peterson applied to be a singer for the NBC radio network in 1927. His handwritten note asking for an audition was so illegible that she thought he was a woman, and she wrote back, telling him she had no openings for female vocalists. Peterson reached her by phone, assured her he was a male vocalist, and persuaded her to give him an audition. (He was hired.) 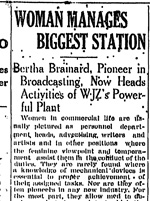 Learning the names of Brainard’s friends and colleagues gave me other areas to research as I tried to tell her life story more fully. I was also able to find proof that, as one of radio’s few women announcers and then the first female broadcasting executive, Brainard was nationally known. Syndicated articles about her achievements appeared in newspapers from Massachusetts to Oregon. In one of them, “Science Now Analyzes the Perfect Radio Voice,” from the Portland Oregonian of 16 September 1923, she was praised as a woman who had the “perfect radio voice.” (It was widely believed back then that women’s voices were too high-pitched, and thus not suited to radio, but Bertha Brainard and several other successful women announcers had lower-pitched voices that sounded pleasant to listeners.) Later, when she became a network executive, Brainard was called a “Pioneer in Broadcasting” in an article headlined “Woman Manages Biggest Station,” which appeared in the Springfield Sunday Union and Republican on 5 June 1927. A thorough profile of her career, the article refuted many commonly held myths about the ability of women to succeed in business. 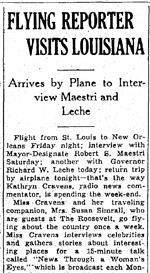 But many newspapers also expressed the era’s prejudices about women in broadcasting. I found many stories stating the “fact” that women could never hope to be announcers, except for doing so-called “women’s programs” like cooking shows. While referring to Bertha Brainard’s early success as the exception, writers quoted male executives who believed women were “...not physically, or by experience and temperament suited to the job” of covering sports or reporting on hard news. (See “Women Announcers? Voices Don’t Seem to Click,” Springfield Sunday Union and Republican, 4 September 1932, p. 6C.) Similar articles quoted surveys purportedly showing that the listeners felt male voices were more authoritative, and saying reaction to using women announcers was negative wherever it was tried. But my own research for my third book, “Invisible Stars: A Social History of Women in American Broadcasting,” demonstrated that this was not entirely accurate, and that some women did succeed as announcers and news reporters even in the 1920s and 1930s. And when I cross-checked the research I had done a decade ago with what was now available from databases like America’s Historical Newspapers, articles reinforced what I had written about such well-respected news commentators as Dorothy Thompson and Kathryn Cravens, both of whom seemed to have plenty of fans, both male and female. There was much additional information about Cravens, who was known as the “Flying Reporter” because she championed air travel and frequently flew to locations where she was doing interviews for her CBS network program, “News Through a Woman’s Eyes.” Using America’s Historical Newspapers, I was able to find out about her visits to cities like New Orleans, where the local reporters seemed quite impressed with her.

Because there were few easy methods for recording programs in radio’s first decade, the one place where early radio lives on is in the pages of publications from that era. By reading the perceptions of the reporters who witnessed the growth of radio, modern researchers like me gain a far greater understanding of the role broadcasting played in American life. And while I still have unanswered questions on my list, thanks to the information I’ve found in historical newspaper databases, that list has become quite a bit shorter. As time goes by and more titles come on line, I can’t wait to solve even more mysteries!

Donna Halper is a media historian, whose research has been quoted in newspapers, magazines, and encyclopedias. She has also been a guest on Voice of America, PBS/NewsHour, National Public Radio/Weekend America, History Channel, ABC Nightline, WBZ Radio (Boston), WIBC (Indianapolis), WNYC (New York) and elsewhere. Ms. Halper is the author of five books, most recently “Boston Radio: 1920-2010 (Arcadia Press, 2011) and “Icons of Talk: The Media Mouths that Changed America” (Greenwood, 2008). A former broadcaster, she is well-known for discovering the rock group Rush, who dedicated their first two albums to her. She is seen four times in the 2010 documentary about the band, “Beyond the Lighted Stage.”