, School of History at Queen Mary, University of London

While the Revolution may have secured Americans their political independence, economic independence remained elusive. As early as 1783, Americans realized that they had not extricated themselves in any meaningful way from the mercantile system of the Atlantic world, still dominated by European imperial might. 1 This realization cut especially deep as the Napoleonic Wars escalated. By 1805 American sailors were at risk of impressment by the British navy. Worse still, maritime commerce came under attack, as the British outlawed America’s lucrative carrying trade. By 1806, President Thomas Jefferson was forced to concede that many of the economic problems that America had faced as a colony still plagued the newly formed nation.2

In response, Jefferson fell back on pre-Revolutionary tactics to assert his nation’s strength. Imposing a highly unpopular non-importation law on Americans in 1806, he attempted to fashion grassroots non-consumption into a federally administered campaign of commercial retribution against the British. The law required that merchants refuse to ship certain British and French goods into the country. Although nominally enforced by an under-developed customs-house and the undermanned Coast Guard, in practice it was a law that relied on the patriotism of merchants and consumers to refuse to consume imported wares.3 The legislation re-politicized the consumption of imported goods in America. Indeed, Jefferson’s legislation was fiercely opposed. Federalists were furious to find themselves subject to Jefferson’s demands. Old guard Republicans were appalled that Jefferson should attempt to re-instate a mercantilist economy, only decades after Americans had fought so hard for free trade. Thus, Jefferson re-ignited a debate over the connection between consumption and patriotism that would endure all the way through the War of 1812 and on into the late 1820s.

This debate over economic policy would take place on a political level and within the broader public sphere. But beyond the printed debates over the virtues of domestic manufactures versus free trade, there was another struggle, where livelihoods rather than partisan agendas were at stake and where personal decisions became political. Looking at the great array of commercial ephemera that was left behind by Americans of the early national period, it seems clear that the shops, warehouses and wharves of Boston, New York and Philadelphia were also key battlegrounds in the fight over America’s political economy. Severely worried by the commercial restrictions, commission merchants, retailers and manufacturers struggled to find a way to retain their customers and remain patriotic between 1806 and 1815. As the trade cards and bill heads of the early Republic suggests, the debate over political economy spilled over into Americans’ daily lives, investing commonplace transactions with broader meaning.

The most immediate question for shopkeepers and shoppers alike was whether they should support the Republican efforts to cripple the British by refusing to sell or consume imported goods. Some shopkeepers felt it best to err on the side of caution and support the non-importation law (and later the Embargo) by de-emphasizing their imported wares. John Bazin, a hardware and looking-glass merchant had proudly advertised in 1792 that he sold imported goods from his shop at 39 Cornhill in Boston. 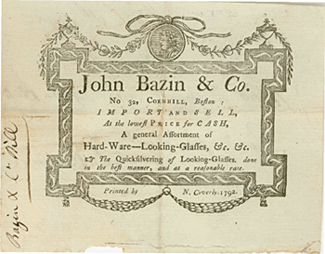 Indeed, he would have been foolish if he had tried to claim anything else. In 1792, Americans relied almost entirely on the British factories in Sheffield for their hardware—everything from crafted cutlery to iron nails came from abroad. Domestically made goods were rare and where available were indubitably inferior. Indeed, in 1802, Bazin updated the style of his trade card to emphasize the role that imports played in making up his stock. The two trans-Atlantic schooners that adorned his advertisement were encircled by a banner that read: “London, Liverpool, Bristol, Birmingham and Sheffield GOODS.” 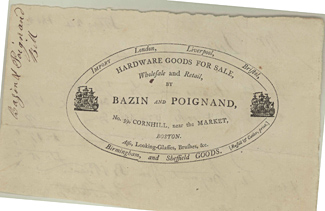 Thus it is significant to note that in 1809, at the height of the Republican commercial restrictions, John Bazin very deliberately altered the text of his trade card. It now read: 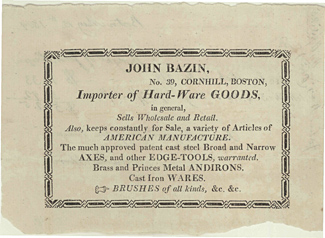 The introduction of this particular phrase—especially at the height of the commercial restrictions—was a clear indication of Bazin’s engagement with the debates over America’s political economy. It was a signal of support for the Republicans’ endeavours.

It would be fair to ask whether Bazin’s inclusion of this phrase was a simple reflection of failing supply lines. After all, the decision to advertise American made goods might simply have been a result of the restrictions’ success. But in 1809, this was not in fact the case. The legislation had been such a failure that Treasury Secretary Albert Gallatin himself had previously denounced the new laws. 4 Only months earlier he had warned port collectors that given the large number of legal loopholes embedded in the Non-Importation Act, they should only move forward with prosecutions when they were sure that a merchant’s intent was malicious and an importation had not been either permissible or even accidental.5 As a result of this confusion, imports were still available to the consuming public. Thus shopkeepers, like Bazin, had to gauge what they thought consumers would be willing to buy. In this context, Bazin’s decision to advertise American Manufactures in particular could be read as an attempt to support Jeffersonian restrictions, albeit in a modest manner. It could also be read as an effort to entreat customers to support the Republicans’ efforts to fight a commercial war against the British. The American Antiquarian Society’s copy of Bazin’s trade card is marked on the back with the name ‘Augustus Moore’ and the sum of $5.25. Perhaps Mr. Moore had decided to make his purchase count for something beyond his own personal needs.

Other merchants and manufacturers joined in this debate in their own way. Ebeneezer Clough, a paper manufacturer, issued a particularly clear message to customers in 1808. His headed notepaper, on which he wrote all his bills, featured a beautiful frieze, detailing the several stages of paper production and printing. 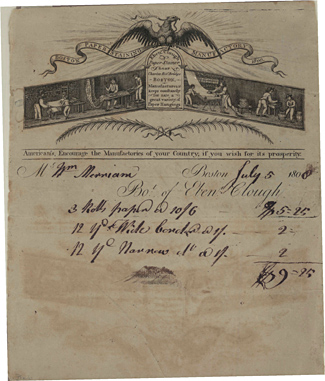 On top of this illustration there was an American eagle, clutching a streamer in his mouth that read “Protection.” Underneath this patriotic image lay the legend “Americans, Encourage the Manufactories of your Country, if you wish for its prosperity.” The politics of this bill head, and consequently the proprietor, could not have been more clear. He made a clear case for the national importance of the restrictions and for protectionism more generally. His headed notepaper may also have allowed shoppers to identify or even support Clough’s cause. Indeed, Clough’s customer, William Merriam, who received his bill on July 5th 1808, only a day after Americans celebrated their independence from Britain, might well have thought that his $9.95 had indeed been well spent.

We still know too little about the ways in which commerce and consumption remained politically meaningful for citizens in the wake of the Revolution. Despite excellent scholarship on the debates between politicians and political economists in this era, the ways in which these policies and ideas took root among the broader population is still something of a mystery. Using the incredible array of ephemera, now digitally available through Readex’s database of American imprints, some of the ways in which American consumers navigated the political challenges of getting and spending in the early republic are finally becoming more clear.

Dr. Joanna Cohen gained a B.A. from Queens’ College, Cambridge and an M.A. from Northwestern University before pursuing doctoral research at the University of Pennsylvania. Her Ph.D. examined the connections between consumption and citizenship in America between the Revolution and the end of the Civil War. Prior to joining Queen Mary in 2009 she was an Andrew W. Mellon fellow at the Penn Program in Democracy, Citizenship and Constitutionalism. She taught American History at Penn for several years and has held fellowships at the McNeil Center for Early American Studies, the Program in Early American Economy and Society, the Gilder Lehrman Institute, the American Antiquarian Society and the Harvard Business School.