When I moved to Alabama in 1998 to take a faculty position with Auburn University’s Department of Political Science, I already knew a great deal about two of the nation’s most notable Supreme Court justices appointed from that state. John Archibald Campbell resigned from the Court at the outset of the Civil War only to return later as an attorney to argue several important cases before his former colleagues. Hugo Black, the first Supreme Court appointee of Franklin Roosevelt, spurred an expansion of the protections contained in the Bill of Rights against state and local government infringement. Upon arriving in Alabama, however, I was surprised to learn of a third justice from the state—a man named John McKinley—who was the first Alabamian to serve on the United States Supreme Court upon his appointment in 1837. McKinley intrigued me. For much of the next decade, I kept my eye out for material about him, but my own academic research and writing took me down a different path.

By early 2007, I had started to devote more time to McKinley, but quickly learned that this justice was forgotten in part because so little information was available. In all of the books and journal articles discussing McKinley that I could find, the cumulative record of his life amounted to approximately one hundred pages, and much contained in those sources was duplicative. I resigned myself to completing no more than a short article on McKinley’s life and legacy.

However, in late June 2007, as I was preparing to leave my office for the summer, I happened onto the America’s Historical Newspapers database on the Auburn University Libraries’ website. I typed in McKinley’s name and was stunned to see the list of results. Because I was leaving a day or two later, I spent the next few hours printing off several dozen newspaper results. These articles became the core of what later developed into my book, John McKinley and the Antebellum Supreme Court: Circuit Riding in the Old Southwest (University of Alabama Press, 2012).

I was fascinated by these newspaper accounts because they revealed a very different image of this justice. Conventional wisdom held that John McKinley was a poorly regarded (but lucky) political opportunist who was unqualified for the bench and largely incapable of fulfilling his judicial duties. That “wisdom” became conventional over the decades after it was initially formulated because there was little to check it against. America’s Historical Newspapers allowed me to do just that.

For example, several newspapers spoke of the high regard in which he was held as he traveled through various southern states to and from Washington while serving in Congress. These articles noted issues related to his health—a stagecoach accident in which he was seriously injured, a paralytic stroke from which he never fully recovered, and a purported cold-water cure for his poor eyesight. They discussed his rulings at circuit and the problems that the large area held for him. (McKinley was the first and only justice to be assigned to the original Ninth Circuit, which consisted of Alabama, Arkansas, Louisiana, and Mississippi, all of which were among the largest states of the Antebellum Period.)


Contemporaneous newspapers recounted poor traveling conditions through the circuit, economic issues that created large divisions between the rich and poor, and violence that was part of the lives of squatters, land speculators, indebted land owners, and others. Land issues dominated McKinley’s circuit and controversies associated with property disputes tested him personally as well. In the newspaper database, I found a Boston Courier article from June 6, 1839, recounting an episode never recorded in a secondary source in which Justice McKinley was assaulted on the streets of Jackson, Mississippi, ostensibly because his property rulings were unpopular there. 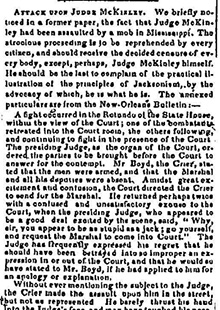 
In short, these newspaper accounts portrayed a man who was respected, who knew and impartially applied the law, and who did his duty traveling on circuit and to the Supreme Court term in Washington even after becoming partially paralyzed. In a very real way, America’s Historical Newspapers has helped forever correct Justice McKinley’s reputation.

I would also like to express my appreciation for the U.S. Congressional Serial Set which helped me find several government documents pertaining to McKinley’s service in both the House and Senate as well as later congressional action that touched upon his career as a Supreme Court justice. For example, in 1839, Secretary of State John Forsyth submitted a report to the Senate that demonstrated vast inequities in the workloads of the justices. Senate Document 50 from January 5, 1839, reveals that McKinley’s Ninth Circuit (which was the furthest from Washington, required the most rigorous travel, and was also the largest judicial circuit in the country) required him to travel some 10,000 miles a year. No other justice traveled even half of those miles in completing their circuit duties. In addition, the document showed that the 7,300 cases on McKinley’s circuit docket comprised two-thirds of the cumulative docket of all of the justices. While the report did not bring about an immediate leveling of the justices’ responsibilities, it was a starting point that would subsequently see the Ninth Circuit split in half and the justices’ workload more equitably distributed. 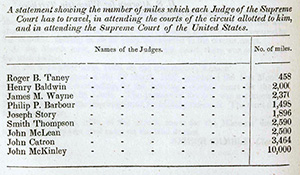 
Access to that report, among other things, helped me to convincingly argue that while the many modern legal scholars who denigrated McKinley’s efforts did not understand the magnitude of his duties, his legal and political contemporaries did.

As does any author, I received an enormous amount of help from many people on the Justice McKinley project. Their contributions were important and made a difference. However, in a very real way, without these Archive of Americana collections—America’s Historical Newspapers and the U.S. Congressional Serial Set—the real John McKinley would never have emerged from the caricature that held him bound for the past century.

Steve Brown received his Ph.D. from the University of Virginia and has taught at Auburn since 1998. He teaches several courses in American Constitutional Law as well as Religion and Politics, Law and Society, and Introduction to American Government. His research interests focus primarily on church and state issues and American legal history. In 2005, his book, Trumping Religion: The New Christian Right, The Free Speech Clause and the Courts received the National Communication Association's Franklyn S. Haiman Award for Distinguished Scholarship in Freedom of Expression. In 2006, he received the National Faculty of the Year Award from the National Society of Collegiate Scholars. He teaches courses in the Osher Lifelong Learning Institute in Auburn, lectures on political and First Amendment issues throughout the state, and also serves as an instructor with the Election Center in providing professional education training to elections officials nationwide.