Most of us are familiar with clipper ships, if only from Currier & Ives prints. Beginning in the 1840s, these beautiful sailing ships plied the seas, bringing goods and people from coast to coast and often to other countries. When gold was discovered in California in 1848, the ensuing demand for speedy transit truly brought the clipper into its own.

In the mid-1850s, as the clipper industry became more competitive, clipper ship sailing cards replaced newspaper advertisements and broadsides as the preferred advertising medium. These cards were usually printed with a combination of letterpress and wood engraving on sturdy enameled card stock. Shipping managers sent cards by private courier to commission merchants and exporters and posted them in any place that might catch the eye of a potential customer.

The quality of clipper ship card design and printing increased from the late 1850s right through the 1860s. Ironically, the clipper ship industry was in decline for most of this period, and few cards were printed after about 1870.

While not all clipper cards were illustrated, many were, using a wide variety of dramatic images, including ships, knights, women, Native Americans, famous people, patriotic imagery, animals and landscape scenes. To verify this, peruse the nearly 400 cards in the American Antiquarian Society's diverse collection, available in the Readex digital edition of American Broadsides and Ephemera, Series I. From the database's main page, select "Ship Cards" and set sail.

As an example of the knowledge you can glean from studying clipper ship cards, we'll focus on just one thematic aspect: images of American historical figures. 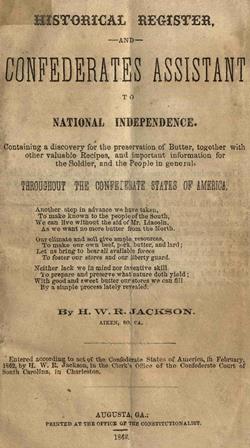 The name Andrew Jackson is immediately recognizable to most Americans today, and it was even more so in 1855 when the clipper ship of the same name left New York on its first voyage to San Francisco. Both the man and the ship enjoyed their share of history—and even controversy.

Jackson was the seventh President of the United States, serving two terms between 1829 and 1837. During his first run for the Presidency in 1824, Jackson received a plurality—but not a majority—of both the popular and electoral votes. It was therefore up to the House of Representatives to choose a President, and they went with John Quincy Adams.

Jackson again stood for President in 1828, this time as the first-ever candidate of the Democratic Party. Jackson easily defeated Adams and won re-election in 1832 over Henry Clay.

Earlier, Jackson had commanded American troops in their victory over the British in the Battle of New Orleans at the conclusion of the War of 1812. Soldiers agreed that Jackson was "tough as old hickory," thereby giving Jackson the nickname "Old Hickory." Of course, the Battle of New Orleans need not have been fought—the Treaty of Ghent had ended the War of 1812 two weeks earlier, but the news had not reached the front in Louisiana.

The Andrew Jackson clipper ship card shown here advertises an 1861 departure, and bears an excellent likeness of Jackson the President. But, look at the top of this card for the bold claim that the Andrew Jackson was "The Fastest Ship in the World." Was this true?

According to the log kept by Capt. John Williams during the Andrew Jackson's 1859-1860 voyage from New York to San Francisco, his ship arrived at the San Francisco pilot grounds (i.e., the mouth of the harbor where the ship would be met and guided into port) 89 days and 4 hours after leaving her New York pilot. This appears to be the best pilot-to-pilot time ever achieved for a New York to California voyage.

However, the Andrew Jackson then had a lengthy wait for a pilot boat to become available. The result was that 90 days and 12 hours passed between the Andrew Jackson raising its anchor to leave New York on Christmas Day, 1859, and dropping it in San Francisco on March 24, 1860. By the rules of the day, what counted in the record books was anchor-to-anchor time, so the Andrew Jackson's run should have gone down as 90 days, not 89.

Meanwhile, the venerable clipper ship Flying Cloud had not one but two 89-day, anchor-to-anchor passages to her credit. Her maiden voyage in 1851 was accomplished in 89 days and 21 hours; she followed this up in 1854 with the all-time clipper record of 89 days and 8 hours.

No matter. The clipper ship industry was struggling in 1860, and the Andrew Jackson's impressive passage gave everyone something to cheer about. The card illustrated here advertises the ship's first voyage after its "record-setting" passage; she was advertised as the fastest ship afloat for the rest of her career.

Star of the Union 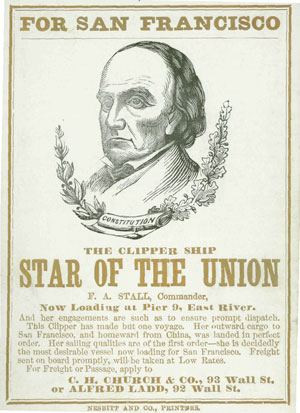 Webster's portrait on the card is a rolled document labeled 'Constitution.' Daniel Webster was known as both defender and expounder of the Constitution of the United States of America. His name and reputation were honored by a number of clipper ships. Ship builder Donald McKay saluted Webster by naming an 1850 clipper Daniel Webster, then did so again in 1855 with the christening of the Defender. Joshua Magoun completed the Expounder in 1856. No clipper ever carried the appellation that Webster's critics used: Black Dan!

This example presents an opportunity to show one way of determining a clipper card's age. The card states that "This Clipper has made but one voyage." Consulting reference books, we learn that the Star of the Union's first voyage from New York commenced January 1853; her second departure, also from New York, was in June 1854, so that is the voyage advertised here.

The real heyday of the clipper ship card was still a few years away. Not many cards were printed in the early 1850s, and only a handful survived. The 1854 Star of the Union piece held by the AAS is the only known example of this card. 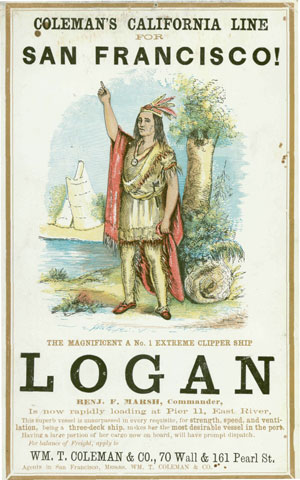 We've seen two clipper cards bearing images of Anglo American statesmen; how about one with a Native American? The original name of the clipper ship Logan's namesake was Tachnedorus, a Mingo. Logan's father was a diplomat for the Iroquois Confederacy, and in this capacity worked closely with Pennsylvania official James Logan. The father adopted the Logan family name for his children as a way of promoting good relations with his diplomatic counterpart, and Tachnedorus became John Logan.

Initially, Logan enjoyed friendly relationships with white settlers. This peace was shattered by the May 1774 Yellow Creek Massacre, in which a raiding party of white Virginia frontiersmen butchered Logan's mother, sister and cousin, along with several other Mingo.

Logan sought revenge, leading a band of Indians that attacked white settlements near the Monongahela River. Women and children were among those killed, and Lord Dunmore, the royal governor of Virginia, responded by declaring war against the Mingo and Shawnee.

The ensuing conflict ended with the defeat of the Indians, who were forced to give up their hunting grounds in Kentucky. Logan boycotted the signing of the peace treaty, instead making a mournful speech that became known as Logan's Lament. Thomas Jefferson took note of this speech and later published it. The image of Logan on this clipper card may represent Logan delivering this speech.

Native Americans were featured extensively on clipper ship cards, and not just because many clipper ships bore the names of famous Indians. They are generally portrayed as exotics and, in the case of men, noble warriors—proud, bold, strong, and inspiring. Shipping agents no doubt wanted their prospective customers to associate these stout qualities with the vessel at hand.

Conclusion
We have just scratched the surface of the clipper ship cards now available in American Broadsides and Ephemera, Series I. These often rare and colorful pieces of ephemera offer fresh opportunities to explore diverse aspects of American history and culture.