Lake Erie by Way of Guangzhou: Or, The Other Canal Boom
Dael Norwood

Associate Professor of History, University of Delaware, and Director of the Program in African American History, Library Company of Philadelphia 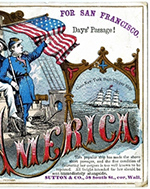 In the mid-nineteenth century, ship owners and shipping lines used sailing cards to advertise voyages of clipper ships. These cards, slightly larger than today’s postcards, announced that Ship A would leave Departure Point B for Destination C on or about Date D, and that you should contact Agent E if you had goods and/or yourself to transport. Shipping managers sent cards by private courier to commission merchants and exporters, and these cards were posted any place that might catch the eye of a potential customer. Most clipper cards advertised sailings from New York and Boston to San Francisco.

The casual observer might associate clipper cards with the California Gold Rush. While the discovery of gold had certainly kicked the building of clipper ships into high gear, the Gold Rush ended in the early 1850s. People and goods continued to come to California, but increasingly this was by steamship and, later, railroads. The heyday of the clipper card was between about 1856 and 1868, a time when the clipper ship industry was actually in decline.

Just about anything imaginable was pictured on a clipper ship sailing card at some time or other. Illustrated cards often sported nautical imagery, knights and warriors, characters from mythology, patriotic scenes, historical figures, and Native Americans.

And, there were women. Sometimes they assumed one of the roles just listed; often, they were just . . . women.

The Readex digital edition of American Broadsides and Ephemera, Series I offers a terrific collection of clipper ship sailing cards. Let’s browse this archive, and look for girls. 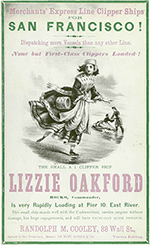 More often than not, women were portrayed on clipper cards as warm and winsome, and a card for the Lizzie Oakford takes this approach. In one of the most charming illustrations on any clipper card, an adorable young woman skates happily as a gent helps a fallen lass to her feet.

The real Lizzie Oakford may have been a relative of J. S. Oakford, who ran an early line of clippers between the east coast and San Francisco. 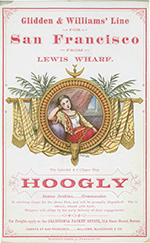 Lest you think a clipper card girl could not be an object of desire, a card for the Hoogly offers a dreamy, alluring woman, complete with trappings of the East. Reclining in her surroundings, she yields the impression that she is faintly exotic, available, and waiting for you. The clipper Hoogly was named for the river Hooghly, in West Bengal, India, which flows through the Ganges delta to Kolkata. 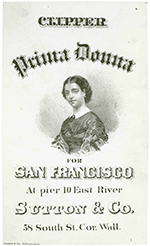 Any ship called the Prima Donna simply must show an opera singer on its sailing card. This example is understated next to most clipper cards, but quite refreshing as a result. Absent are a sailing date, the name of the ship’s master, the usual claims of being “one of the fastest ships afloat,” alerts that the ship “is loading rapidly,” etc. Instead, there is the single, stark word “Clipper” at the top, the ship’s name, an Italian-looking beauty (of course!), and sparse supplemental wording. This reserved design approach succeeds impressively, not least because it is rendered in black and white.

While most clipper cards were printed by a combination of wood engraving and letterpress, this Prima Donna card was lithographed.

Columbia, as a feminine symbol of the United States, had her origins as an Indian princess. Over time, she metamorphosed into an Anglicized Lady Liberty and turned up in political cartoons, advertisements, and many other places.

An Ellen Sears card shows a robust Columbia in all her patriotic glory. Her flowing hair is crowned tightly by a Liberty cap, her eagle-topped staff serves as a mast for the huge American flag waving behind her, and her sword is drawn. And if these trappings are not sufficient to impress, there are also her bare breast and leg.

The Ellen Sears illustration is reminiscent of Eugène Delacroix’s 1830 painting “Liberty Leading the People.” Look it up and compare! 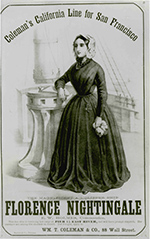 The Crimean War, declared by Britain, France, and Turkey against Russia, began in 1854. Thirty-four-year-old Florence Nightingale was sent that year to care for injured British soldiers in the hospital at Scutari, in the Turkish Ottoman Empire.

Nightingale was both caregiver and advocate for the wounded from the time of her arrival until the war ended in 1856. For this alone, Nightingale was celebrated in England as a national heroine, but she had more to contribute. She worked successfully to establish nursing as a true profession, and encouraged the use of data collection and statistical analysis in medicine.

Florence Nightingale’s exploits became known in the United States, enough to name a clipper ship for her. The eponymous card here places the “Lady with the Lamp,” as she was known, on the deck of a clipper ship, pausing from her note-taking, pen still in hand. When compared with period photographs and paintings of Nightingale, this card presents a surprisingly accurate likeness.

Virtually everyone engaged in clipper-related business activity – shippers, shipping agents, ships’ chandlers, and most passengers – were men. Thus, clipper ship sailing cards were aimed at a target audience that was almost exclusively male. These cards generally presented action scenes, but one noticeable thematic exception still had considerable male appeal: women. Just as attractive women are featured in contemporary advertisements for male-oriented products and services, so they were in clipper ship times. And the variety of ways women appear on clipper cards is quite extensive.