Making Books Out of Ether: The Next Generation of Historical Research

Making Books Out of Ether: The Next Generation of Historical Research

, author of Fubarnomics: A Lighthearted, Serious Look at America's Economic Ills and the Nef Family Chair of Political Economy at Augustana College in Sioux Falls, SD.

The Constitution crackled as it burned, fifty of its avowed enemies looking on with gleeful eyes, the sweet stench of freshly fired muskets filling their nostrils. People love to burn that which they hate. Flames regularly consume effigies, flags, draft cards, braziers, and despised decrees. As a corollary, people hate to see that which they love go up in flames. Americans alive in the tumultuous 1780s were no exception. So there would be hell to pay for those who dared to set a copy of America's proposed frame of government aflame.
—Draft, "Birth of a Capital Market: The Life and Death of the First U.S. National Debt, 1776-1836"

Librarians, archivists, books, bibliographies and microfilm machines have long been the research historian's best friends, but there is a new name on the A-list—the digital collection. And what a friend! The digital collection does not compete with the historian's older buddies but rather complements them, bringing out their best qualities. The resulting party promises to be the highlight of the season and could summon forth a new, more consilient generation of historical research.

The digital collection's main virtues are its speed and convenience. When I began my research career as a graduate student at SUNY Buffalo in the early 1990s, the five-page section that begins with the paragraph displayed above would have taken at least a week to research, particularly during Buffalo's long winter (November through March). I would have needed big blocks of time to dig my car out of the snow bank, slip and slide to school, find a parking space, snowshoe to the library and warm up my fingers and toes—all for the privilege of squinting at a half dozen ancient newspapers on opaque microcards for a few hours before reversing the trek. If I found something of interest, which was hardly assured, I had to copy it out by hand or pay what was to me at the time a small fortune for a copy of indifferent quality. Fifteen years later, I conducted the necessary research in just two late-night, 20-minute sessions in Readex's digital collection of early American newspapers. Moreover, I found more materials relevant to the episode of interest, the Independence Day 1788 riot in Albany, New York, than I would have searching the old way.1 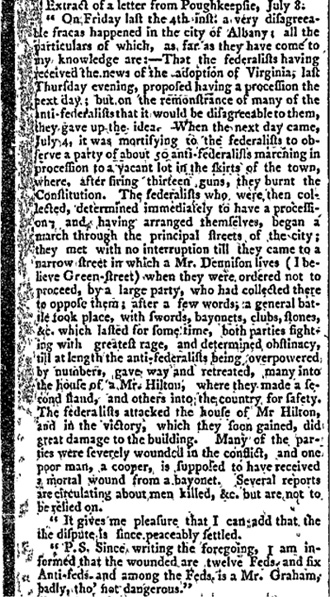 I have also made extensive use of Readex's digital America's Historical Newspapers and Early American Imprints series for several other projects, including Knowledge for Generations: Wiley and the Global Publishing Industry, 1807-2007 (2007), Financial Founding Fathers (2006), The First Wall Street: Chestnut Street, Philadelphia, and the Birth of American Finance (2005), The U.S. National Debt, 1787-1900 (2005), History of Corporate Governance (2004) and History of Corporate Finance (2003). Every project I do, including course preparation, now relies heavily on the digital collections of Readex and other providers of quality full-text searchable electronic archives of primary, secondary and tertiary source materials.

Despite dire predictions to the contrary, the digital revolution has strengthened the traditional book by making it easier and cheaper to manufacture and distribute. For authors able to leverage the search capabilities and convenience of digital collections, the revolution has also made it much easier to research and write book-length treatments of important historical episodes. The quantity and quality of historical output is increasing and will continue to do so as growing numbers of researchers make increasingly extensive and sophisticated use of the new electronic tools.

Readex and other digital collection providers have blessed historians and other scholars with their biggest productivity boost since the proliferation of microforms in the mid-20th century. Many scholars, I hope, will use at least some of their newfound time to expand their horizons, to seek answers to important real-world questions (rather than taking part in arcane scholarly debates) and to learn more about what other disciplines have to offer. Thanks to digital collections, E.O. Wilson's compelling vision of consilience, of the unity of knowledge, is closer at hand than ever. But much remains to be done. Many collections have yet to be digitized, and many independent scholars and professors at colleges with limited research budgets find gaining access to the best electronic collections difficult. The future looks bright, but it will require cooperative efforts among scholars, librarians and digital collection providers to meet the research needs of all.

Robert E. Wright (Sioux Falls, SD) is the Nef Family Chair of Political Economy at Augustana College in Sioux Falls, South Dakota. He is the author of a dozen books, including Fubarnomics: A Lighthearted, Serious Look at America’s Economic Ills (Prometheus 2010). For many years he taught business, economic, and financial history at New York University’s Stern School of Business. He is also a curator for the Museum of American Finance. He is the coauthor (with David Cowen) of Financial Founding Fathers: The Men who Made America Rich and One Nation under Debt: Hamilton, Jefferson, and the History of What We Owe. His articles have appeared in Barron’s, the Los Angles Times, Forbes.com, Moody’s Economy.com, the Chronicle of Higher Education, and Reason, among others. He has been a guest on NPR, C-SPAN, The Lou Dobbs Show, the BBC, and Larry Kane: Voice of Reason.