The Chinese themselves were very indulgent towards us, and happy in the contemplation of a new people, opening to view a fresh source of commerce to their extensive empire.
—From the journal of Major Samuel Shaw, as reported in Fowle’s New-Hampshire Gazette, 27 May 1785, and other historical newspapers

To the calls and “huzzahs” of astonished merchants, sailors, and dockworkers, the American ship The Empress of China slipped into her berth along the wharves of New York’s East River on 11 May 1785. The Empress was the republic’s first Indiaman—the first American vessel to sail “eastward of Good Hope” into the waters of the Indian Ocean and South China Sea. Fifteen months earlier, she had departed New York with a cargo of Appalachian ginseng and Spanish dollars. Now onlookers gaped to see the wares she had brought back from the East.

As soon as customs documents had been signed, ledgers and daybooks filled out, and cargo assigned to auction, the Empress’s business agent, Major Samuel Shaw, sent a hurried message to the corner of Great Dock and Broad Streets.  It was here at Samuel Fraunces’s tavern that the U.S. Secretary of Foreign Affairs, John Jay, maintained his department office. Shaw believed it a matter of urgent business to frame the Empress’s journey to China as a historic achievement that catapulted the new republic into the community of civilized nations.  Shaw himself captured the country’s sense of the significance of the voyage when he prefaced his letter to Jay with the words, “It becomes my duty to communicate to you . . . an account of the reception its citizens have met with, and the respect with which its flag has been treated in that distant region.” 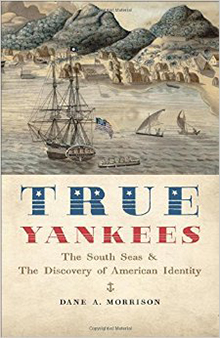 Questions of reception and respect, of how Americans would be regarded, as individuals and as citizens of a republic, haunted public discussion of the Empress’s voyage. The records of these moments—so seemingly significant at the time, yet so neglected in early American textbooks and in the public memory—intrigued me as I researched material for my recent book, True Yankees: The South Seas and the Discovery of American Identity (Johns Hopkins University Press, 2014).  Like Shaw, I wondered about questions of reception, of what the reaction was like at home as well as abroad.  How did American men and women receive the news of their countrymen’s first encounters beyond the Atlantic Ocean?  These questions were important in framing my research, because the answers would shed light on the ways in which the newly independent nation situated itself on the world stage and established its early precedents for global encounter.

The best gauge for assessing the public mood lay in news reports of the Empress’s voyage, and here Early American Newspapers made finding answers possible. Within this online resource I could probe reactions across the country through several forms, including reports, essays, correspondence, and advertisements.  What the research revealed was that the publicity that surrounded the Empress’s arrival was extraordinary.  Following her landing in New York, ports up and down the seaboard were abuzz with the news, spawning a myriad of proposals and projects.  Across the country, the newspapers celebrated—and embellished—the national character of the “first ship, from this new nation, to that rich and distant part of the world.”[1]

Across the country, the popular press erupted in the same celebratory spirit, often quoting at length from Shaw’s letter. “We have the pleasure of announcing the arrival . . .  from the East-Indies . . . after a voyage of fourteen months and twenty-four days,” the Salem Gazette, New Hampshire Gazette, and over a dozen newspapers announced.[2] 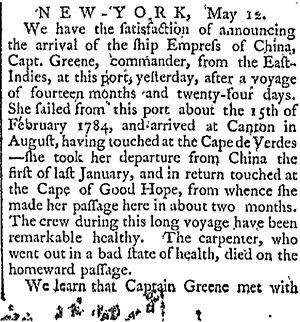 The Salem Gazette called the voyage a “judicious, eminently distinguished, and very prosperous atchievement (sic).”  The Falmouth (Maine) Gazette and The State Gazette of South-Carolina included a letter in which “a gentleman on board has furnished us with the following particulars, selected from his Journal”—Samuel Shaw—“of the reception which the ship Empress of China met with on her arrival in China.”[3]

The Salem Gazette, the New Hampshire Gazette, and the Virginia Journal praised the enterprise, courage, and ingenuity of the American officers and crew, extolled the voyage as a “judicious, eminently distinguished, and very prosperous achievement,” and asserted that all had been blessed by a kind Providence. Such traits, their readers reassured themselves, were the marks not of a loose set of dependent provinces, but the character of an independent nation.[4]

Accompanying the theme of national celebration, a close reading of the newspapers of the day reveals another trope, consistent with the financial needs both of the merchants who invested and the nation in distress, was that of enterprise.  When an “extract of a letter from New York”—Shaw’s letter to Jay—was printed in the Virginia Journal and Alexandria Advertiser on 19 May 1785, Tidewater readers could appreciate the commercial gains he boasted.  The return took only four months and 19 days.  Furthermore, “she has brought back all the money that was sent in her; her cargo having purchased more than would load her twice.”  The New Hampshire Mercury for 24 July 1785 printed much of the same material found in other newspapers, although with more than the usual errors of fact:

Some years ago, when the advantages of trade and navigation were better studied and more valued than they are now, the arrival of a vessel after so prosperous a voyage, from so distant a part of our globe, would be announced by public thanksgiving and ringing of bells!—Should not this be our practice now, since Providence is countenancing our navigation to this new world?  We hope in our next to give readers a more perfect detail of this important voyage.[5]

Furthermore, the significance of the Empress’s voyage can be traced in the flurry of advertisements that filled newspapers from New Hampshire to the Carolinas. 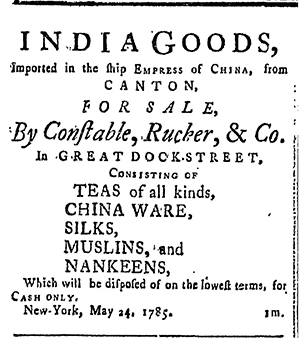 Journals exulted over the cornucopia of exotic goods carried home under Yankee sails, crowing, “On the 9th instant arrived at Baltimore, directly from China, the ship Pallas, . . . She has on board a most valuable cargo, consisting of an extensive variety of teas, china, silks, satins (sic), nankeens, &c. &c.” Throughout the summer and autumn of 1785, the Virginia Journal and Alexandria Advertiser carried advertisements for “fresh Hyson and Gunpowder teas” and other goods “received by the Empress of China, directly from Canton.”  One could find ads for teas, tea tables, “two very curious small tea chests,” cotton and nankeen cloth, porcelain, “lately arrived at New York, ship Empress of China, directly from Canton.”[6] 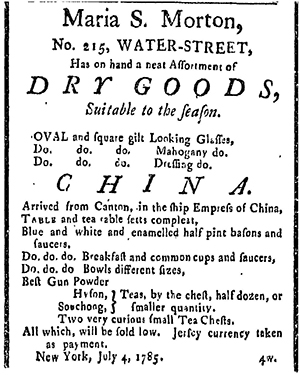 Dane A. Morrison is a professor of early American history at Salem State University. He is the author of True Yankees: The South Seas and the Discovery of American Identity (JHUP, 2014), and is currently researching the maritime experiences and global encounters of early American travelers. Reviewing True Yankees, Choice wrote, “Although part of U.S. cultural and economic history, the role of long-distance sea trade in developing the nation's character and global outlook in the early national period has not been discussed until now....The book is informative and entertaining, a rare combination. Highly recommended.”