Pensions for Soldiers' Widows: Congressional Attitudes During the 19th Century

Congress, as caretaker for the nation, has always revered and honored those soldiers who served their country. The Readex digital edition of the U.S. Congressional Serial Set can be used to reveal the ways in which Congress' attitudes toward what was appropriate changed during the 19th century.

In 1828, Congress passed a bill for the relief of certain surviving officers and soldiers of the Army of the Revolution. As a result, Captain William Anderson was granted a pension for life. Upon his death, in 1830, his widow petitioned Congress to continue the payment to her. The answer of the Committee on Pensions was unequivocal1:

"The title of the act itself seems to indicate the intention of Congress to confine its benefits to the 'surviving officers and soldiers.' No provisions were made for the widows of deceased officers or soldiers."

"It is to be presumed, from the resolution, that Captain Anderson, during his life, received the benefits and liberal provisions of the act; and the committee are constrained to say, that the petitioner has of course received more of the bounty and liberality of the country for the services of her late husband than the widows of officers whose husbands died previous to the passage of the act."

In an act passed in 1836, Congress established the rule that the widow was entitled to a pension if the soldier had served after the marriage. The rules were relaxed in 1838 to allow a widow the pension for five years that would have been allowed for her husband had he lived (however, this lasted only until 1844). 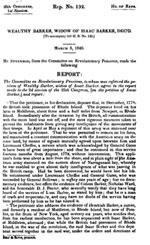 In 1840, Congress also passed a private relief bill to pension a woman with the delicious name of Wealthy Barker, whose husband did not serve in the army, but did, while remaining on his farm on an island in Narragansett Bay, send signals daily to the American army on the mainland about the British troops stationed near his home.2

In 1850, an interesting twist on an extension occurred. Nancy Brice had received a pension for 10 years for her husband who was killed in action serving aboard the frigate "Constitution." She gave up the pension when she remarried. Her second husband died in 1848, "leaving her in a destitute and helpless situation, aged, infirm and childless." She petitioned for a renewal of her pension. The Senate Committee said, "Without expressing an opinion upon the subject, the committee have agreed to report a bill for the relief of the petitioner, leaving it to the Senate to sanction or disapprove the principle."3

In 1852, the issue resurfaced and the Senate committee that year said they "deem it proper at this time to state, that after giving the subject due consideration, they entertain the opinion that it is just and proper in cases like this… to renew the pension."4 Senate committees in the next two Congresses reiterated their opinion, and a bill was approved by the House of Representatives and the President in 1856.5

As a sidelight, years later, President Cleveland vetoed a number of bills adamantly maintaining that a Civil War widow had forfeited her right to a pension by remarrying (in essence abandoning the soldier's memory). Congress forthrightly objected saying they didn't want to discourage remarriage, especially because it saved the government money for all the years they didn't pay the pension.

By 1860, Congress was paying pensions for the War of 1812, various Indian wars and the War with Mexico. Many of the decisions on private relief bills hinged on whether Congress felt the cause of the soldier's death could reasonably be attributed to the wounds or disease he suffered during his service.

In the 1860s, children of Revolutionary soldiers also were applying for continuation of their mothers' pensions to them. Congress was still adapting the rules. In 1862, they pensioned a woman whose husband had served in the Revolution and had drawn a pension himself from 1818 until his death in 1846. A widower, he married a second time in 1830, and the second wife was deemed entitled to a pension under an act passed in 1853.6

In 1873, the House Committee on Revolutionary Pensions and War of 1812 asked the Commissioner of Pensions for "an estimate of the probable expense to the Treasury by placing on the rolls all soldiers of the Revolution and war of 1812 who can make proof of military service, say ten days, and widows who were married as late as, say, 1825, and restoring those who were stricken off the rolls by reason of participation in the rebellion . . ."7

However, in 1875 the Senate Committee on Pensions, in response to a request of children of a Revolutionary soldier for a pension in right of their father, said, "it would be carrying the principle too far to allow pensions to grown-up people who claim through a soldier long since deceased." 8

By 1888, Congress was considering requests for pensions of children of Revolutionary soldiers favorably. They passed a bill granting a pension to the two daughters of Major Abner Morgan, who served 11 months and 10 days in the Revolution, in part because the two daughters took care of their father in his last years before he died in 1837. 9

In 1896, the Committee on Pensions recommended passage of a bill granting a pension to "the daughter of John Spears, who served as a private for fifteen months in the regiment commanded by Colonel Goode, Virginia Line, was of the Revolution. . . . he was a pensioner on account of same until his death in 1842. His widow was also a pensioner until her death. . . . the claimant is a widow 75 years old, in indigent circumstances . . . ."

"There are several precedents for the proposed legislation, and in view of the claimant's great age and dependent circumstances, your committee believe that such precedents may very properly be followed in this case." 10 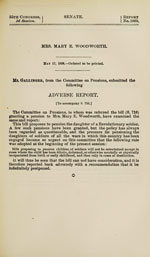 But in 1898, Congress had to draw the line. "This bill proposes to pension the daughter of a Revolutionary soldier. A few such pensions have been granted, but the policy has always been regarded as questionable, and the pressure for pensioning the daughters of soldiers of all the wars in which this country has been engaged became so urgent on this committee that the following rule was adopted at the beginning of the present session:

"Bills proposing to pension children of soldiers will not be entertained except in cases where the child has been idiotic, deformed, or otherwise mentally or physically incapacitated from birth or early childhood, and then only in cases of destitution." 11

It is an interesting quirk of research that you can sometimes trace the thinking of Congress more completely through their comments and actions on Private Relief Bills than you can by reading the bills that make wholesale policy changes.