Of Presidents and Papers

Of Presidents and Papers 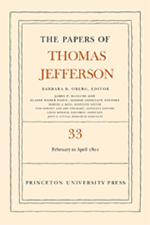 The Papers of Thomas Jefferson, established at Princeton University, is preparing the authoritative and comprehensive edition of the correspondence and papers of our nation’s third president. As historians editing Jefferson’s incoming and outgoing correspondence, we are responsible for gathering documents and making them available to posterity in an accurate, transcribed, and contextualized format through our published and digital editions. Our “humanities laboratory” (as our general editor Barbara Oberg refers to it), consists of folders of more than 70,000 photocopied manuscripts gathered from over 900 repositories and private collections. These manuscripts line every wall and fill almost every surface area of our small space and are the core of our collaborative scholarly enterprise.

We never tire of sharing with others the process of producing a documentary edition. When we hosted an annual documents-based seminar for high school students last year, the teenagers looked incredulous when we explained that our compilation of Jefferson correspondence, some in multiple versions, is the single most comprehensive resource of its kind in the world. The techno-savvy students were equally intrigued by the clunky object that, until recently, occupied a corner of our office. We explained that this microfilm reader had enabled us to search thousands of documents from federal repositories and other smaller collections. As we demonstrated this alien technology to a texting and tweeting generation, we were reminded that not long ago these microfilmed manuscripts or microcard collections were the only access points to archives short of in-person visits.

Now, because of the availability of so many of these records in Readex’s online databases, we are able to dig up valuable research gems in a fraction of the time and eye strain. Our unlimited access to these materials, we humbly realize, is because our history librarian keeps our extensive scholarly needs ever on her radar as well as our institution’s continued investment in such resources, despite a stretched acquisitions budget. We recognize that although hundreds of institutions of all types and sizes do provide their patrons with access to such collections, open access to these materials is not yet a universal reality, and we are gratefully aware of the privilege access entails. As beneficiaries of these resources, we support improvements in collection development breadth and depth of coverage as well as increased access for all who might benefit from these treasures, including our high school visitors.

At the same time, we are conscious of the frustrations of online searches because of incomplete runs or unavailable records, imperfect copies of older newspapers, or poor quality images and OCR scans of original microfilm. We also confront the painful limitations of online keyword searching. Yet for all these limiting factors, there is an immeasurable thrill at being able to find the exact newspaper article referenced in a letter to Jefferson, or the confirming biographical detail revealed in a death notice of an obscure individual who corresponded with Jefferson but who would otherwise have been lost to history. The ability to streamline a search helps us to be responsible stewards of the materials and provides time for other aspects of editing.

One recent example of such targeted searching in online collections by Readex (especially America’s Historical Newspapers and Early American Imprints: Series II: Shaw-Shoemaker, 1801-1819) is evident in the research we conducted for Jefferson’s First Inaugural Address, the documents of which were published in Volume 33 of The Papers of Thomas Jefferson. Students of American history will recall that Jefferson and Aaron Burr were tied in the much-contested presidential election of 1800, which had to be decided in the House of Representatives. Jefferson did not know for certain he would be president until the tally of the 36th ballot was announced on February 17, 1801, declaring the head of the Republican Party as the nation’s third president.

Although a gifted writer and the author of the Declaration of Independence, Jefferson was not known for his oratorical strengths. But when the fifty-seven-year-old plain-dressed Virginian entered the Senate chamber of the United States Capitol on March 4, 1801, to take the oath of office as president, the crowded assembly was all ears to hear him.1 The Philadelphia Aurora for March 18 reported an audience of 1,140 people, including 154 women in addition to members of Congress. After Jefferson delivered his inaugural address in “so low a tone that few heard it,” his cousin, Chief Justice John Marshall, administered the oath of office.

Jefferson’s surviving papers give no evidence that he began drafting his presidential address before the official election results were reported or that James Madison or any of his fellow Virginians helped him develop the speech’s wording. With only two weeks to craft this expression of his political beliefs, Jefferson quickly prepared a statement intended to be both conciliatory and unifying. He carefully selected his words, labored over how best to express the relationship between the will of the majority and the rights of the minority, and tried to avoid politically inflammatory language. Perhaps the most memorable phrase in his first inaugural address is his pronouncement that “we are all republicans: we are all federalists.” As editors, we were intrigued to know how this passage was drafted, what its origins were, how it was heard on its soft-spoken delivery in the Senate chamber that noon in March, how it echoed in the press and correspondence in the days and weeks following, and how it has come to encapsulate Jefferson political theory in American memory.

The correspondence itself provided helpful clues to the language question. Jefferson had paired the words “republican” and “federalist” as early as 1792 in a letter to Thomas Pinckney.2 In 1798, he commented that “both parties claim to be Federalists and Republicans, & I believe with truth.” 3 Thus the coupling of these words was not a novelty designed for his inaugural address, but it did achieve almost soundbite status in its association with it.

Third-party remembrances and accounts helped us piece together the ceremonial occasion as it was experienced by those present. But lacking audio records or YouTube versions of the delivered speech, in order to ascertain what version of the address was actually heard, we needed to read how it played out in the contemporary press, see how widely Jefferson’s words were disseminated and discover whether his original language was replicated. Because we knew the exact date and substance of the speech, we were able to search the Readex database of historical newspapers for the president’s message and trace its subsequent reprintings and variations.

Jefferson gave newspaperman and fellow Republican Samuel Harrison Smith an advance copy of the address for publication in his National Intelligencer on March 4, 1801. Smith’s wife, the Washington society observer Margaret Bayard Smith, related that Jefferson gave her husband the address early on the morning of the inauguration so that “on coming out of the house, the paper was distributed immediately.”4 Smith’s version served as the basis for newspaper, pamphlet, and broadside reprintings that followed around the country over the next two or three weeks. Many newspapers, both Republican and Federalist, printed the inaugural speech, using the same punctuation and capitalization of the now-famous phrase. By the day after the inauguration, the Alexandria Times, the Washington Federalist, and the Baltimore American all had obtained copies of the speech and published it. By March 7, the speech had reached Philadelphia and appeared in the Aurora and the Gazette of the United States. By March 9, it debuted as a broadside in New York and as an extra produced by the Norfolk Herald. The Boston Independent Chronicle and the Universal Advertiser advertised a version of the address to be executed with neatness and available “to adorn the Parlours of all true FEDERAL REPUBLICANS.”5 In some of these publications the words “we are all republicans: we are all federalists” were rendered in capitals, italics, or block printing to highlight their importance in the speech. It seems that when the speech was printed in full, the coupled words usually replicated Smith’s rendering of it (lowercase, no capital letters, no italics or bold fonts, and maybe a semicolon in place of a colon).6 The only exception we found upon examination of the speech in more than 20 newspapers from March 1801, was in the Otsego Herald; or Western Advertiser, March 26, 1801: “We are all REPUBLICANS: We are all FEDERALISTS.”

Jefferson presidential historian Noble Cunningham observed that Federalist newspaper editors who were not fond of Jefferson nonetheless printed the new president’s speech as well as fellow Federalists’ moderate commentary on it. As time passed, however, more pronounced Federalist criticism of the inaugural address appeared, sometimes attacking its wording, style, “soft language,” and use of metaphor,7 even occasionally reversing the order of the coupled words to “we are all Federalists; we are all Republicans.” 8

Such attention to detail is part of the editorial enterprise, even if these details do not change the course of history or always make it into our annotation. But they do add a rich and nuanced complexity to single narrative interpretations of history and give us a deeper understanding of the revolution of 1800. While Jefferson intended his words to be unifying and conciliatory, not all Americans viewed his speech in the same light. Many years later in 1818, when Jefferson was sorting through his earlier papers, he recalled his first inaugural address, “I fondly hope we may now truly say “we are all republicans, all federalists,’ and that the motto of the standard to which our country will forever rally, will be ‘federal union, and republican government.’”10 The timelessness of Jefferson’s words, even in our current civil discourse and sharp partisan debate, serve as reminders to us all.

1 Much of this material is drawn from the editorial headnote and subsequent drafts on Jefferson’s First Inaugural Address in The Papers of Thomas Jefferson, ed. Barbara B. Oberg and others, 37 vols. to date (Princeton, N.J., 2010), Vol. 33:134-52 (hereafter cited as PTJ).

Martha King is an early American historian and an associate editor with the Papers of Thomas Jefferson at Princeton University. She has worked on five documentary editions in her career including the Henry Laurens Papers, Nathanael Greene Papers, Thomas A. Edison Papers, and James Madison Papers.