The discovery of news articles published in the 1830s about a 139-acre silk farm in Framingham, Massachusetts—along with a stunning 19th-century image of bombyx mori, the silkworm, at several phases of its life cycle—opened the door to our first use of digital archives in a museum exhibit.

Staff and volunteers at the Framingham Historical Society and Museum were in process of organizing The Fabric of Framingham, an exhibition that weaves together the warp of the town's textile traditions with the weft of its vibrant social fabric. An important goal for the exhibition was to introduce visitors to primary source materials as historical context for the textiles and costumes from our collection. 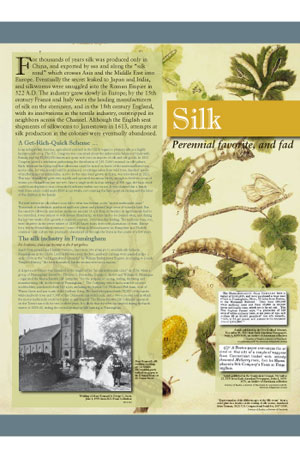 Background image: Silk-worms. Letter from James Mease transmitting
a treatise on the rearing of silk-worms, by Mr. De Hazzi, of Munich. With plates, &c. &c.
February 2, 1828. Read, and referred to the Committee on Agriculture. Serial Set Vol. No. 172.

We gathered materials on Framingham's first industry, the manufacture of straw bonnets, and on the town's longest-lasting industry, wool and wool products. We traced the histories of cotton, linen, rubberized fabrics, ready-made clothing and even a short-lived attempt at making silk. The Historical Society's research team searched the digital Early American Newspapers collection and downloaded articles and advertisements related to these industries in Framingham.

We knew from a local history book that the stockholders of the Massachusetts Silk Company had purchased 139 acres in Framingham in the early 19th century "for the purpose of raising, reeling, throwing and manufacturing silk." In Early American Newspapers we found an article from the November 23, 1835 issue of the Connecticut Courant that reported two wagons loaded with 70,000 mulberry trees from Connecticut were on their way to Framingham. The trees would be essential to the new silk enterprise, because mulberry leaves were the only food acceptable to silkworms, nourishing them to grow and finally to spin their cocoons of silk thread.

Other news articles offered additional—and intriguing—information on this long-forgotten industry. In an unexpected gesture, Readex's Jim Walsh discovered and sent us eight more articles on the Massachusetts Silk Company, as well as a link from the U.S. Congressional Serial Set to a color plate illustrating bombyx mori in its larval, worm and moth phases against the background of a mulberry branch. This color plate appears as a frontispiece in an 1828 "treatise on the rearing of silk-worms," translated from German, by "Mr. De Hazzi, of Munich." It was published in the U.S. Congressional Serial Set with an accompanying letter of transmission from James Mease, after which it was referred to the Committee on Agriculture. Congress was actively promoting sericulture (the production of silk) in the 1820s and 1830s as a practical and lucrative enterprise and as a prospective boost to the American economy. As soon as I saw the color plate, I knew it would be an ideal illustration for the silk section of our exhibition.

After receiving permission from Readex, a division of NewsBank, we worked with a professional design firm to complement exhibit text by reproducing the digital images in large banners or panels. Our designer, Bailey Donovan, combined high-resolution images on a large panel, eight feet by four feet, which now hangs in the exhibition and is illustrated here.

Increasingly, like other researchers, museum curators are enjoying the exponential increase in primary sources that can be accessed online. For me, the experience was also one of learning about the process of using digital images for exhibit purposes. With the cooperation and support of the creators of historical digital collections, a whole new world of images as well as content can now be used and shared with a wide audience.