Talking News with Carolyn Cassady: A Conversation with the Matriarch of the Beat Generation

Talking News with Carolyn Cassady: A Conversation with the Matriarch of the Beat Generation 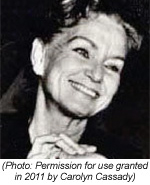 Closing in on her 88th year, Carolyn Cassady is still gracefully full-speed ahead. The wife of Neal Cassady, one-time lover and confidant of Jack Kerouac, and a somewhat reluctant Beat Generation icon herself, she’s recently returned to her home in England after a whirlwind trip to the U.S. for the production wrap-up of Walter Salles’ new film version of Kerouac’s masterpiece “On the Road,” in which she is portrayed by actress Kirsten Dunst. Her daily duties include sheaves of mail in need of reply, books to sign (her own “Off the Road: My Years with Cassady, Kerouac, and Ginsberg,” a treasure in itself), the occasional visiting rock star, and interviews to grant and subsequently deliver. It isn’t odd for the BBC to call or knock requesting a quote or access to the private mementos of her storied past. 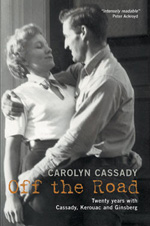 A decade after I did my undergraduate work at Marlboro College on Beat Generation writers, with focus on the women, Carolyn and I became friends through correspondence. And as one might assume a fan would, I’ve peppered her with whatever questions cross my mind. Many times, she’ll implore me back to her book. “Didn’t I cover that in ‘Off the Road’?” And of course many times I find she has, to my chagrin. But she is always welcoming, reminding me that a simple sign in her kitchen reads “Ask Carolyn.” So I do.

I’ve come to also relish the questions she asks me because I learn something of her even by the reversal of our typical pattern of inquiry. Recently, we revisited my career with NewsBank. I’d glossed over that topic in the early days of our chats, explaining I work not as a journalist but rather as a writer of teaching activity-plans based on current news and historical events. This time around however, I expanded upon the details of NewsBank’s Readex division: how we not only preserve historical newspaper archives through the digitization process, but also make said archives more easily retrievable through a search-interface. She thought that was interesting, or at least feigned so out of politeness. Whether her interest was authentic or not, I began to wonder about her ideas on newspapers, past and present. So yet again, I asked Carolyn.

It turns out that today in England her news-reading routine is sparse to none. “I don’t take a newspaper and hardly ever see one. I used to buy the Friday late Evening Standard in London just to read Brian Sewell’s great art criticism.”

I read her reply with a slight shudder, but I could sympathize with her to some extent when she elaborated, “They are more interested in stories that will sell papers, and not all of them accurate, just sensationally doctored.”

Well then, I thought to myself. Not much further I can go with that line of questioning. But what of her interaction with newspapers in the past, and more pointedly, when she was a young girl in Lansing, Michigan, and later Nashville, Tennessee?

“I don’t remember any newspapers from my early childhood in Michigan. I think my parents read the Nashville Tennessean and the Nashville Banner, but I never did. I don’t know what interested them in newspapers other than the current news.”

Hmm. This was going to be trickier than I’d thought. I’d have to take the conversation in a different direction. But first I resolved to use one of my favorite functions of the Readex interface, the one that allows a user to save a PDF image of any chosen document, to send her this article.

Surely she’d be interested in reading an item about the Nashville Community Playhouse circa 1937. In that era, and at that playhouse, she excelled in set design and ascended to the top spot in the make-up department. I created the file to send her and tip-toed up to my next question.

“I was recently thinking of Gilbert Millstein’s 1957 review of Jack Kerouac’s ‘On the Road.’ What impact do you think newspaper coverage had on not only the Beat writers’ literary careers, but also on the public’s conception of the Beat Generation itself?” I asked.

“Now then,” came the beginning of her response and I instantly knew, with just those two words, that I’d queried well. “I do remember the reviews of ‘On the Road.’ I was appalled by the many journalists who so thoroughly trashed the book! I thought they sounded threatened! All I could conclude was that society at that time was so smug and hypocritical; I suspected these guys were probably living much as Jack revealed he and Neal did, but had so far been successful in covering it up. Well, that’s just a guess, but why else such fury?” 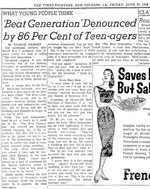 Carolyn’s observations made sense to me. How else could a book with characters deviating so radically from the cultural norms of the era be received? The press was in fact all over the Beat Generation with criticism and condescension in the late 1950s.

Kerouac, for one, was deeply affected by the press’s mischaracterization of “Beat,” which he held to be a state of beatitude, of bliss and happiness in art and life. And the press came down hard on him, especially after the publication of “On the Road.” If only he hadn’t passed away from alcoholism in 1969 at the still-tender age of 47, I’d again reach for my old friend, the digitized historical newspaper, to remind him of the better sentiments towards his epic tome. 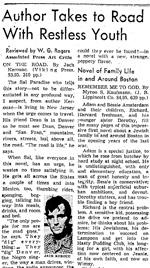 Thinking of Jack, I decided next to query Carolyn on Readex’s system of delivery – that somewhat surreal realm most of us navigate daily, the Internet. Specifically I wondered what Jack and Neal would have thought not only of the technology, but also their robust presence on the web.

“Jack and Neal would be dumbfounded by the Internet and all the stuff about them on it. They only had radio and tape recorders in those days. Of course, they would be pleased by the notice but not the errors nor exploitation.”

I was particularly pleased with her reply as it had been my assumption. But her answer also rings true within the Readex database. A simple search on the names “Jack Kerouac” and/or “Neal Cassady” within America’s Historical Newspapers brings back a plethora of results. Everything from book reviews, movie reviews, and milestone anniversaries of major Beat Generation works and events, to the way generations ever since the Beats have utilized and advanced their influence and art forms.

Pondering preservation, I decided to tackle that question next. After reiterating the process by which Readex accomplishes this task, I asked, “What value do you see in preserving newspapers in this way?”

“I think preserving newspapers is a good idea. It will give future generations intimate history.”

“In your opinion, are newspapers more valuable than textbooks in that they offer first-hand accounts of events as they unfolded?”

“Well, it depends on how accurate either the newspapers or the textbooks are. There are so many myths and errors in history. Any decent author would do careful research, including newspapers, on his or her subject,” she said.

I liked that answer. I liked it so much that I decided to search just one more time on that very topic. And there it was: a 1906 article from the Dallas Morning News in which an “experienced teacher” came to much the same conclusion as Carolyn.

An “experienced teacher.” I let that thought set with me for awhile and decided I needed nothing more from her on the topic. We could move on to other things.

In so many ways, Carolyn has become one of my experienced teachers. The education she has bestowed upon me, and countless others, is an education in history — and what is history if not the echoes of our collective lives, unfolded? Beyond its imprint upon our impressionable hearts, we reflect our history in our artistic endeavors, in our emergent technologies, in our modes of business, and in our foundational principles, among other things. And as history is learned, and new history is subsequently made, newspapers have, and do (despite their changing landscape), endeavor to chronicle the events that make it.

(My express thanks to Carolyn Cassady for her graciousness, perpetual patience, and generosity with time and spirit.)

David’s first full day with NewsBank was September 11, 2001. The events of that day were, for him, a visceral lesson in the importance of a deep news database. He is a graduate of Marlboro College where he majored in Writing and Literature with a focus on the Beat Generation.