The Tallest of the Tall Tales: Using Historical Newspapers to Unearth the Secrets of the Cardiff Giant's Success

The Tallest of the Tall Tales: Using Historical Newspapers to Unearth the Secrets of the Cardiff Giant's Success

, author of A Colossal Hoax: The Giant From Cardiff That Fooled America (Rowman & Littlefield, 2009)

Over the years, the Cardiff Giant has been called America's greatest hoax as well as the world's most successful scientific hoax. England's Piltdown Man—a purported evolutionary missing link—also lays claim to the latter distinction, but, really, in a head-to-head match, who's not going with a 10-foot, 3,000-pound giant?

Here's the story: In 1867, George Hull, a small-time rogue and avowed atheist from Binghamton, New York, got in a heated argument with a Methodist preacher, who maintained that every word in the Bible was literally true. Hull subsequently came up with a scheme to make pious Americans look like fools—and perhaps make himself some money along the way. Drawing inspiration from the passage in Genesis that “there were giants in the earth in those days,” Hull and his collaborators sculpted a giant out of a block of gypsum and staged its discovery on a relative's farm in Cardiff, New York. 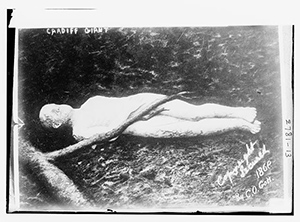 The so-called Cardiff Giant was an immediate sensation. Tens of thousands of curiosity-seekers descended upon Cardiff, paying fifty cents a pop for a few minutes with the colossus. Most believed that it had been a living, breathing giant in ancient times, petrified into stone by some mysterious act of nature. Others thought it an ancient statue, the remains of a lost American civilization on par with the Greeks and Romans. Newspapers all over the country provided daily coverage, sharing all the latest theories as to the giant's origin, including those from scientists, who fell for it hook, line, and sinker. Hull made some missteps that would prove his undoing, and the hoax was revealed a few months later. But, amid a hotly contested debate over the Fifteenth Amendment to guarantee Negro voting rights as well as the political and social reconstruction of the South, it was the Cardiff Giant that grabbed newspaper headlines and captivated audiences far and wide.

Hull unleashed his hoax at a time when railroads blanketed the nation and made travel that much easier, while newspapers and the telegraph together made news break faster and wider than ever before. But some of the most important factors in the giant's success had been simmering for decades. Like the Cardiff Giant itself, their history can be found in the newspapers of the time. Below are a few samples (all taken from America’s Historical Newspapers, an Archive of Americana collection) that tell this much larger—and at times gigantic—story.

Americans in the first half of the nineteenth century were mad for science. They voraciously read scientific manuals and attended popular lectures. They developed an incredible faith in the possibilities of science, not to mention their own “expertise.” And they knew just enough scientific vocabulary to be dangerous.

Petrifaction, of course, is next to impossible, as skin decays quickly after death. But Americans frequently reported finding bodies that had turned to stone. In reality, they mistook the hard, leathery flesh of corpses for something more exotic. But as newspapers uncritically printed—and reprinted and reprinted—accounts, the phenomenon became widely perceived as scientific fact, even when exaggerated to the point of a tall tale. 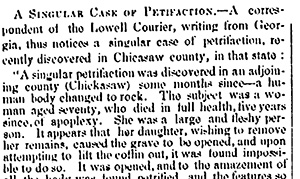 A singular petrifaction was discovered in [Georgia] some months since—a human body changed to rock. The subject was a woman aged seventy....She was a large and fleshy person....It required the strength of six men to get the statue out, and it was estimated to weigh 600 pounds....when the grave was opened it was found full of water. The water, I suppose, held the earthy articles in solution, and they were deposited gradatim as the animal matter was removed (New York Commercial Advertiser, April 19, 1850, page 2). 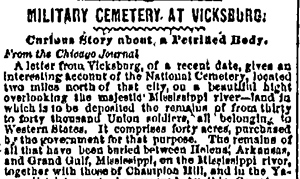 A letter from Vicksburg, of a recent date, gives an interesting account of the National Cemetery....One petrified body has been exhumed under a sand-bar that has been a long time under water....Not only were the face, hair, whiskers, &c., perfectly natural, but every part of the uniform, although one mass of stone, was perfect. So great was its weight that it came near sinking the skiff in taking it ashore. It had been a very large, fine-looking man (Chicago Journal, rpt. in Philadelphia Inquirer, April 12, 1867, page 3).

GIANTS IN THE EARTH

As Americans cleared and settled their new lands, they often came upon the large bones of extinct animals. They already had great faith that just about anything was scientifically possible, but, really, it wasn't that much of a stretch to identify these bones as belonging to human giants. After all, giants were a historical fact—the Bible said as much.

A Baltimore paper says, “a Human Skeleton has been brought to that city from the Rocky Mountains, near the head waters of the Missouri, in height eight feet nine inches, and weighing one hundred and eighty pounds.” (Salem Gazette, May 8, 1838, page 2). 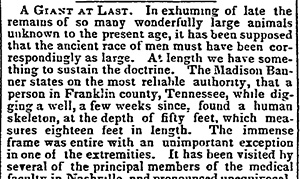 The Madison Banner states on the most reliable authority, that a person in Franklin county, Tennessee, while digging a well, a few weeks since, found a human skeleton...which measures eighteen feet in length....It has been visited by several of the principal members of the medical faculty in Nashville, and pronounced unequivocally, by all, the skeleton of a huge man....These unwritten records of the men and animals of other ages...put conjecture to confusion, and almost surpass imagination itself (Boston Evening Transcript, October 10, 1845, page 4).

During this period, America was Europe's little brother, always looking to measure up. As any young nation would, the United States developed a serious inferiority complex when it came to things like literature, art, and architecture. In this age of Romanticism, which celebrated the histories of nations, Americans felt particularly lacking—their continent could “only” draw from the American Indian. As such, Americans fervently sought evidence that a great white civilization once called their continent home, or, at the very least, that seafaring ancients had visited their shores. This archaeological agenda led to the misinterpretation of legitimate American Indian artifacts as well as outright fakes. 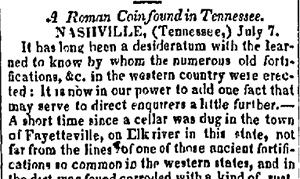 A short time since a cellar was dug in the town of Fayetteville [Tennessee]...in the dirt was found…a small piece of metal, which being disrobed of its covering was ascertained to be a Roman silver coin, issued about 150 years before Christ....[It] has been seen by hundreds, many of whom are antiquarians, and they are all satisfied it is a genuine coin, and one gentleman who was lately in Italy and saw the busts of the persons represented on the coin declares the heads very good likenesses (New York Daily Advertiser, August 3, 1818, page 2).

Most notably, there were the infamous Holy Stones, “discovered” in the earthworks of Newark, Ohio in 1860: 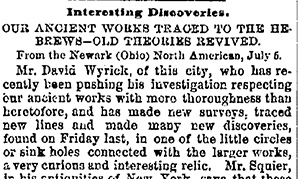 [Mr. David Wyrick] found...a very curious tapering stone...and on each [side], in neat Hebrew characters, brief inscriptions, which seem to be characteristic of the old Hebrews, and give new vitality to the old theory that these works are in some way connected with the lost tribes (Newark North American, rpt. in Albany Journal, July 12, 1860, page 2). (Ed. Note: Wyrick conveniently “discovered” a second stone in November 1860 to bolster his original find. Both were fraudulent.)

Often, missteps can tell us as much about the progress of American science as the great achievements. In the Archive of Americana, there's no shortage of petrified men, giants, and American Egyptians just waiting—in the words of the Madison Banner—to put conjecture to confusion and surpass our imaginations.

Scott Tribble's publication credits include the Boston Globe, Guitar.com, Celtics.com/NBA.com, and TIMELINE. In his book, A Colossal Hoax: The Giant From Cardiff That Fooled America, published in 2008 by Rowman & Littlefield, Tribble “take[s] a humorous topic and create[s] an excellent historical narrative that develops the incredible story within the social and intellectual climate of the times” (Academia).