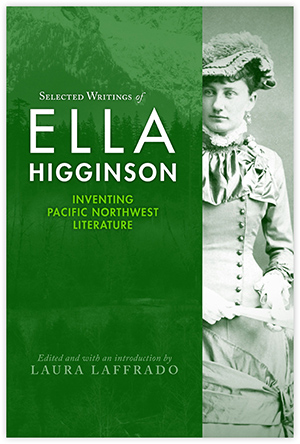 As I searched archives and databases to recover Higginson and her writing, I came to recognize and appreciate the unique research value of digitized newspaper collections, especially for authors like Higginson who published work in the late nineteenth and early twentieth centuries, a period which saw a notable rise in U.S. newspaper circulation. Matthew Schneirov notes that between 1890 and 1905, total U.S. newspaper circulation “rose from 36 million to 57 million” (5). At the same time, these years saw even greater growth in the number of periodicals published, resulting in increased publishing venues for authors. Schneirov writes that “magazine circulation tripled between 1890 and 1905. . . . By 1900 the total circulation of monthly magazines was 65 million or about three magazines for every four people” (5). To garner more subscribers, periodicals publicized their issues and authors in newspaper advertisements. In these ways, newspapers became an increasingly fertile ground in which authors published their work and in which periodicals promoted authors that they published.

Women authors especially profited from this growth. Sherrie Inness and Diana Royer note that in the “booming marketplace” of the second half of the nineteenth century, “women who lived far distant from the thriving centers of eastern civilization” benefitted from new publishing opportunities (4). Sandra Zagarell writes that by the late 1870s careers of women authors were newly aided by “developments in the production of print material,” “expanding networks of distribution,” and the “emergence of proto-modern marketing techniques” (xii). As a result of these changes, databases of newspapers of the time are a rich source for scholars researching women authors, especially neglected women authors.

The access provided by the Early American Newspapers database to both smaller and more regional newspapers is especially valuable for scholars. This recent availability of digitized American newspapers with varying circulations and from all U.S. geographical regions has opened unique possibilities for discovering lost works and references. Digitized newspaper databases offer a productive location for research into the work of turn-of-the-century authors, often providing material not found in other online resources.

As my work on Higginson developed, I had, through detailed research in print and digital archives, catalogued over 800 of her published works. It was, of course, easier to locate published works from the prime of Higginson’s career. Once her literary reputation was established, Higginson’s work appeared widely. When searching for works by an author who was commonly known, a paper trail of their career in periodicals and newspapers is typically relatively straightforward to trace; works published during this period are correspondingly easier to locate. For example, Higginson’s most well-known poem, “Four-Leaf Clover,” first published in 1901, was so widely reprinted in the early 20th century that it has come up multiple times in every U.S. newspaper database I have accessed. 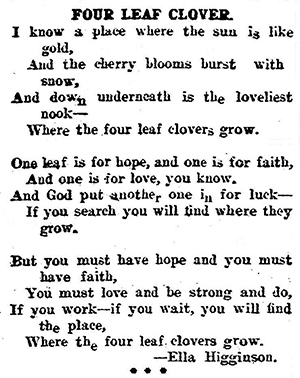 However, the case differs during this period for works published before an author is familiar to the reading public. Such works were likely less widely reprinted and so come up less commonly—if at all—in database searches. In the fairly comprehensive catalogue I created of Higginson’s writing, gaps existed in the early years of her literary career. I suspected that prolific and ambitious Higginson had published more work in the nineteenth century, but found little evidence to support my conjectures.

Only when I accessed the Early American Newspapers database did I make vital progress. My first search was basic, using Higginson’s name and chronological order to enable me to see earliest results first. With that search, I immediately located two early poems by Higginson that I had never seen published or referenced before: they were entirely new to me. These results were all the more exciting because I had previously assembled that catalogue of over 800 published works by Higginson. That such exhaustive work was, in fact, not exhaustive was very gratifying as was the fulfilling of my speculation that Higginson had published more early work than I had previously found. 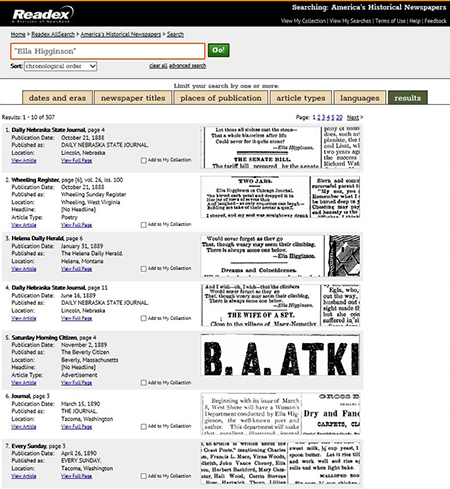 The two poems that I located in Early American Newspapers are “Just Once” and “O, Puget Sound.” “Just Once” appeared in the Daily Nebraska State Journal (Lincoln, Nebraska) on October 21, 1868. “O, Puget Sound” appeared in the Every Sunday newspaper (Tacoma, Washington) on September 13, 1890. The poems and the newspapers which published them provide instructive and significantly different information. 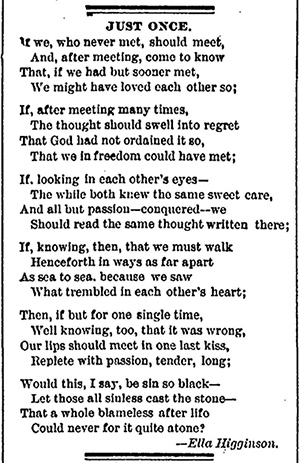 Because the Daily Nebraska State Journal was not a popular or prestigious publication from the Northeast nor a regional publication from the West Coast (see below), it is likely that “Just Once” was first published in another (as yet undetermined) publication and that the Daily Nebraska State Journal reprinted it. However, in my searches to date, this is the only publication containing the poem. Having closely mined the Higginson Papers in the Washington State archives as well as a variety of newspaper databases, I located this poem only in a regional newspaper available in Early American Newspapers. 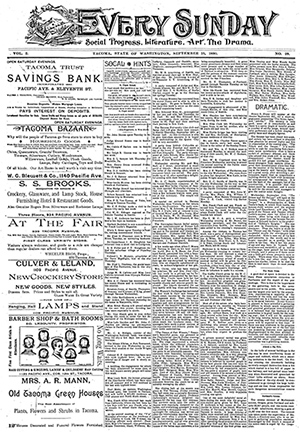 Conversely, “O, Puget Sound” was published in a newspaper from the Pacific Northwest, the region from which Higginson wrote. My close work with Pacific Northwest archives and databases had made me well aware that some regional newspapers from the time had not yet been digitized or were not yet considered valuable enough to be digitized due to their size and circulation. My finding of “O, Puget Sound” reinforced for me that while the availability of digitized newspapers is indeed valuable, that value is considerably increased with the availability of regional and smaller newspapers. 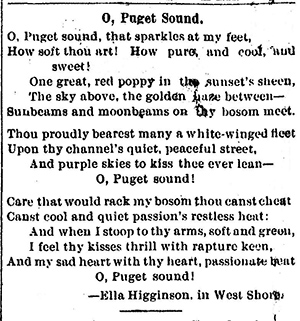 Further, the poems in combination with the newspapers in which they were published provide additional information. “O, Puget Sound” offers moving praise of the Pacific Northwest, a region then viewed as remote by the larger nation and infrequently publicized. No wonder Tacoma’s Every Sunday newspaper printed this tribute, anticipating the positive response of readers who longed to see their region celebrated in print. Conversely, “Just Once” is a romantic poem in which Higginson deliberately elides the regionalism of “O, Puget Sound.” The Daily Nebraska State Journal‘s choice of “Just One” provided their Midwestern readership with a teasing love poem untethered to any region.

Finally, one might reasonably ask, what does the locating of two poems matter, especially two earlier poems by a woman author whose literary work is still being recovered? I would argue that it matters a great deal. The recovery of “Just Once” and “O, Puget Sound” provides valuable information regarding how close and far afield were the publications in which an author’s work might have been published at the time; how newspapers of various sizes and circulations were a key venue for literary publication; and how published poems by the same author might strategically veer from the regional to the romantic. I would also argue that my locating of these poems compellingly signals what many scholars already know: not all databases are created equal and no one database is sufficient. In this case, by using the Early American Newspapers database my research was furthered and new, exciting possibilities appeared.

Laura Laffrado, whose current research project is the literary recovery of Pacific Northwest author Ella Rhoads Higginson, is Professor of English at Western Washington University. She has published widely on American literature.