‘The Accursed Incubus’: Highlights from The American Civil War Collection, 1860-1922

The April release of The American Civil War Collection, 1860-1922: From the American Antiquarian Society includes a book about the war’s causes by “A Southerner,” a sermon on the “national troubles” by a New Englander, and the autobiography of a prisoner of war by a self-described opium addict.

Fanaticism, and Its Results: or, Facts Versus Fancies (1860) 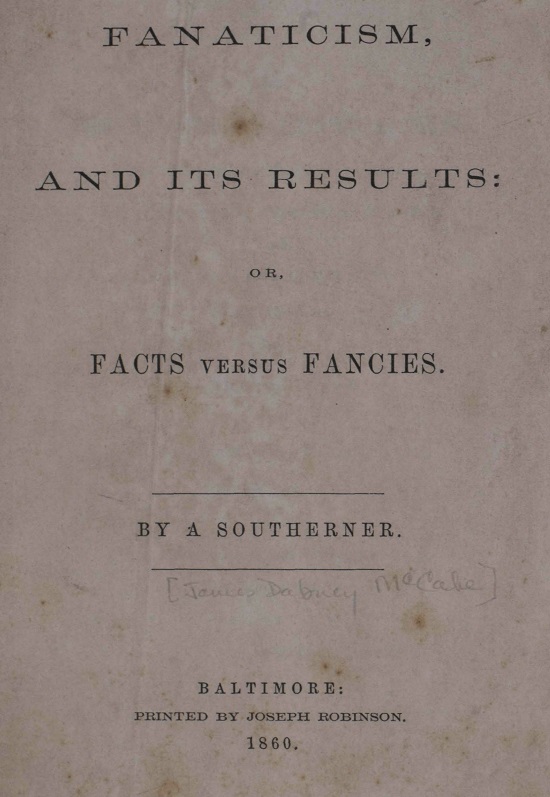 Under the subtitle “Facts versus Fancies,” the author begins his work.

In offering to the public the few imperfect and hastily written thoughts which are herein contained, we have been influenced by no party zeal, or sectional motives. The only feelings which have influenced us, have been truth and justice. A desire to do justice to both parties—North and South.

He continues, writing in a section titled “The Demon of Abolitionism”:

We would not do injustice to any one or any party, and we trust that we will be able to show that our assertion is true, and that the only traitors in the land are those who are known as the Abolition and Republican parties.

Continuing his characterization of Republicans and abolitionists as traitors, the author proclaims his support for a unified nation before writing:

The South has now an opportunity offered her, which, in our humble judgment, she ought not to neglect. The State of South Carolina proposes to her sister Southern States, that they shall each appoint delegates to a Convention, to be held in Atlanta, Georgia.

The object of this Convention is not to dissolve the Union, nor even to endanger its safety. It is a Convention, called for the purpose of bringing the entire South into a united body, and to devise some means for securing the greatest possible happiness and stability to the entire country, and to adopt measures for the enforcement of the rights of the South. 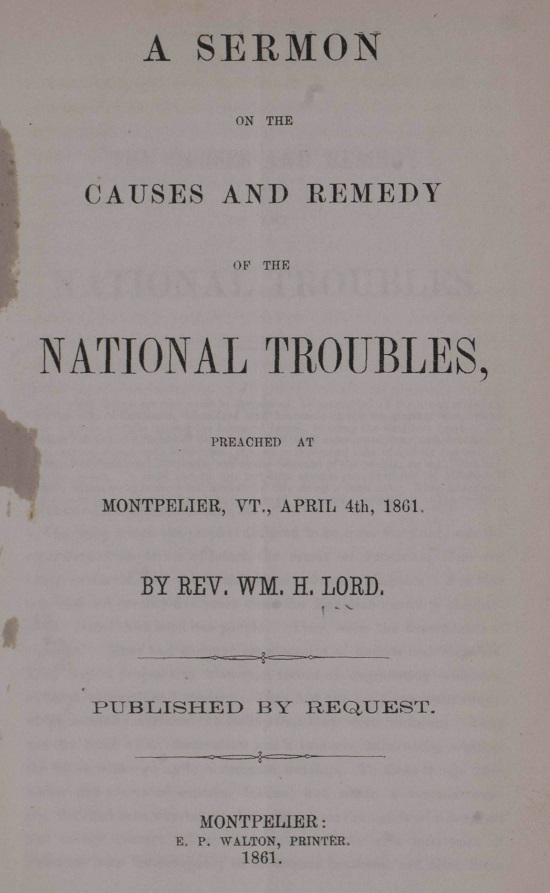 Preaching in Montpelier, Vermont, on April 4, 1861, Reverend William Hayes Lord compares “the national troubles” with those that led to the separation of the tribes of Israel.

But such a union, historic and glorious, became at length a subject of jealousy. In the judgment of some, it fostered idolatries, and social and unequal privileges, and exalted the ruling class into an aristocracy. Ambitious men first fomented discontent and envies, and then said to the people, “Behold! See the burdens that we suffer!” Designing men in the State, and arrogant men in the Church, became spokesmen in the artificial excitements they had created. Bye-and-bye compromises were proposed, but they all failed. Concessions were asked and then refused, were granted and then withdrawn. Politicians fanned the flames, and sought to make the division permanent and hopeless. They soon had their separate priests, altars and sacrifices, so that all remembrance of their old bonds might be obliterated…Every day drifted them further and further from unity, and from all hope of it, until at last the divided and imbittered descendants of Abraham, flinging to the winds their ancestral recollections and their future aspirations, stood face to face armed for a hostile encounter.

It would be, doubtless, far easier to tell what is not our remedy. It is difficult, if not senseless, many think, to talk of a remedy, when dissolution has almost or quite supervened. It may be equally idle to speak of a remedy when the patient is tossing in the delirium of madness, and is building governments and states and confederacies with a rapidity and brilliancy that is strange and startling as the creations of the genii. But still there is a remedy. It is not compromise, at least now, though if compromise would render us again the integrity of the Union, there is no compromise…that I would not freely grant. It is not concession, for I can see no concession that as yet would be given or accepted.

Lord then shares his thoughts on internecine wars, saying:

Civil war is not the worst thing; not so bad as the death, the dissolution forever of the State; but it is what could be anticipated with no joy; its triumph could not be heralded by aught but agony; its victories could be commemorated only by tears, and its end must be constantly sought with fervent prayer, as the most terrible retribution that befalls nations in order to preserve their existence. It may come. The remedy that we fear may be the remedy that would save. 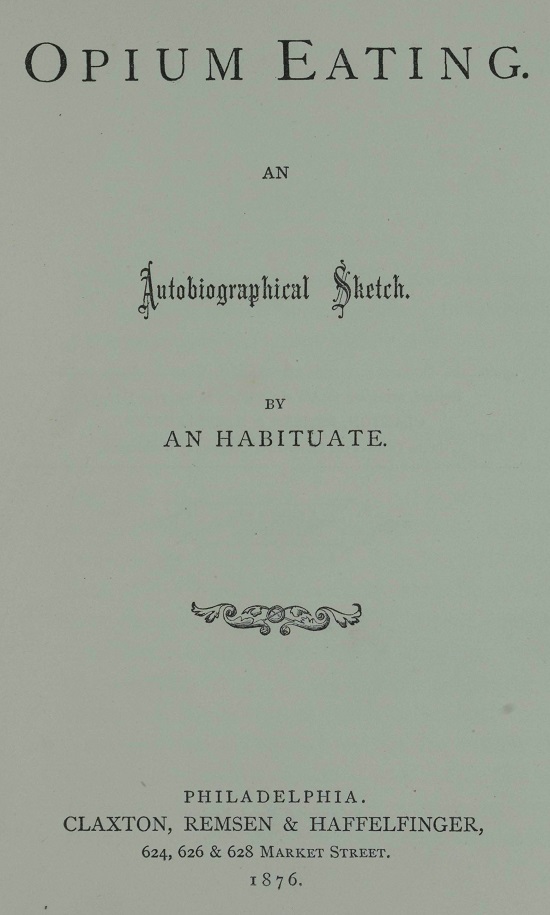 This autobiographical sketch by a Union prisoner of war describes the soldier’s experiences during his captivity and his sufferings following the war.

ANDERSONVILLE! Dread word! Dread name for cruelty, and patriots’ graves, I stand paralyzed before thy horrid gates! Thou grim Leviathan of Death! I feel heart-sick as I approach thee! I feel how powerless I am to tell thy horrible story, though monster monument of Inhumanity in the nation’s history! I feel thy fangs while yet I descry thy hideous form through the mazy scope of years! I carry thy stings, and the grave along shall hide the scars upon the marred and shattered body though hast sacrificed, as a tree stripped of its fruit and foliage!

After being counted into detachments and nineties by the commandant, the notorious Captain Wirz, we were marched into the prison. Heavens! what a sight met our gaze as we marched into that enclosure of destruction! Lying between the stockade and the dead-line, was a long line of corpses, which was necessarily one of the first objects our eyes tested upon as we entered the prison gates.

The anonymous author later describes his attempts to overcome the opium addiction he had developed after his release from Andersonville:

I might tire the reader’s patience over and again, by recounting my frequent attempts to throw off the accursed incubus, but shall content myself with briefly referring to such as may benefit the public, and especially those who are in danger from opium, but who as yet have not passed beyond recovery. The first attempt of any real interest I made about one year after the commencement of my unfortunate medical treatment, which resulted in fastening the habit upon me.

I stopped square off. The first day I felt meanly and sleepy, and had such an influx of remorseful and melancholy thoughts, and such a complete loss of command over myself, that I could have wept the livelong day, - I felt so crushed and broken-hearted…..On the third day I began to feel more comfortable in some respects, the sleepy, drowsy feeling having passed away; I also had gained a little more command over my feelings, though I was still morbidly sensitive, sad, and broken in sprit, and at a word would have burst into tears.