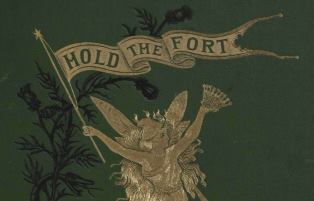 The current release of imprints from The American Civil War Collection, 1860-1922: From the American Antiquarian Society includes a scathing editorial from “The Atlantic Monthly” excoriating President Andrew Johnson and the National Union Party, an illustrated copy of a song celebrating the rescue of a besieged Union force by General William Tecumseh Sherman, and a catalogue of war relics on display in Fredericksburg, Virginia, in the 1880s. 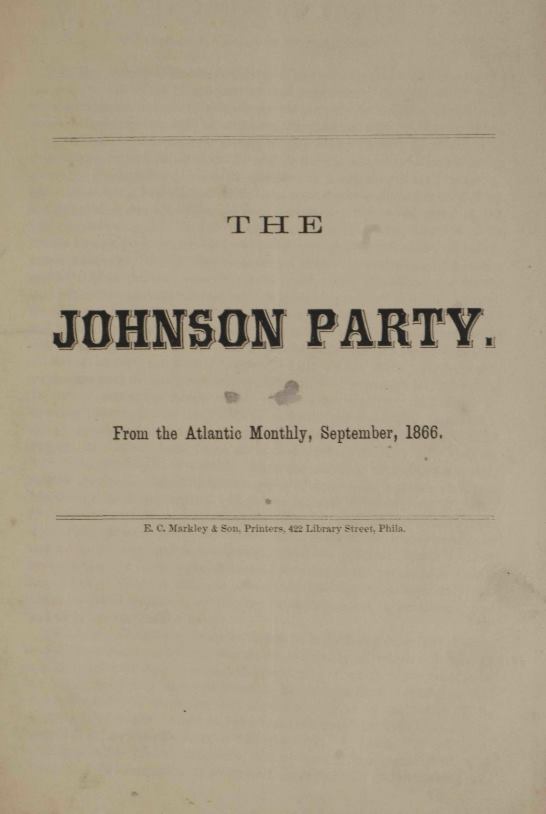 The President of the United States has so singular a combination of defects for the office of a constitutional magistrate, that he could have obtained the opportunity to misrule the nation only by a visitation of Providence. Insincere as well as stubborn, cunning as well as unreasonable, vain as well as ill-tempered, greedy of popularity as well as arbitrary in disposition, veering in his mind as well as fixed in his will, he unites in his character the seemingly opposite qualities of a demagogue and autocrat, and converts the Presidential chair into a stump or a throne, according as the impulse seizes him to cajole or to command. Doubtless much of the evil developed in him is due to his misfortune in having been lifted by events to a position which he lacked the elevation and breadth of intelligence adequately to fill. He was cursed with the possession of a power and authority which no man of narrow mind, bitter prejudices, and inordinate self-estimation can exercise without depraving himself as well as injuring the nation.

Thus begins an “Atlantic Monthly” editorial in its September 1866 issue. At question was the issue of readmitting the rebellious southern states to the union and President Andrew Johnson’s readiness to absolve the rebels. The editorial expresses its contempt for the ease with which the former confederates were to be reestablished as states.

To the human mind it appears that the Federal government has spent thirty-five hundred millions of dollars, and sacrificed three hundred thousand lives, in a contest which the legal mind dissolves into a mere mist of unsubstantial phrases; and by skill in the trick of substituting words for things, and definitions for events, the legal mind proceeds to show that these words and definitions, though scrupulously shielded from any contact with realities, are sufficient to prevent the nation from taking ordinary precautions against the recurrence of calamities fresh in its bitter experiences. The phrase “State Rights,” translated from legal into human language, is found to mean, the power to commit wrongs on individuals whom States may desire to oppress, or the power to protect the inhabitants of States from the consequences of their own crimes.

The editorial savages the National Union Party, the coalition which served to reelect Lincoln and conferred the vice presidency on Johnson. It urges voters to elect a 40th Congress that would resist Johnson’s policies.

But whatever views may be taken of the President’s designs, there can be no doubt that the safety, peace, interest, and honor of the country depends on the success of the Union Republicans in the approaching elections. The loyal nation must see to it that the Fortieth Congress shall be as competent to override executive vetoes as the Thirty-Ninth, and be equally removed from the peril of being expelled for one more in harmony with Executive ideas. The same earnestness, energy, patriotism, and intelligence which gave success to the war, must now be exerted to reap its fruits and prevent its recurrence. The only danger is, that, in some representative districts, the people may be swindled by plausibilities [sic] and respectabilities; for when in political contests, any great villany [sic] is contemplated, there are always found some eminently respectable men, with a fixed capital of certain eminently conservative phrases, innocently ready to furnish the wolves of politics with abundant supplies of sheep’s clothing. These dignified dupes are more than usually active at the present time; and the gravity of their speech is as edifying as its emptiness… This insensibility to facts and blitheness to the tendency of events, they call wisdom and moderation. Behind these political dummies are the real forces of the Johnson party, men of insolent spirit, resolute will, embittered temper, and unscrupulous purpose, who clearly know what they are after, and will hesitate at no “informality” in the attempt to obtain it. To give these persons political power will be to surrender the results of the war, by placing the government practically in the hands of those against whom the war was waged.

The National Union Party did not survive the election. Johnson was impeached and survived the loss of his office by one vote in the Senate. He was not nominated in 1868. 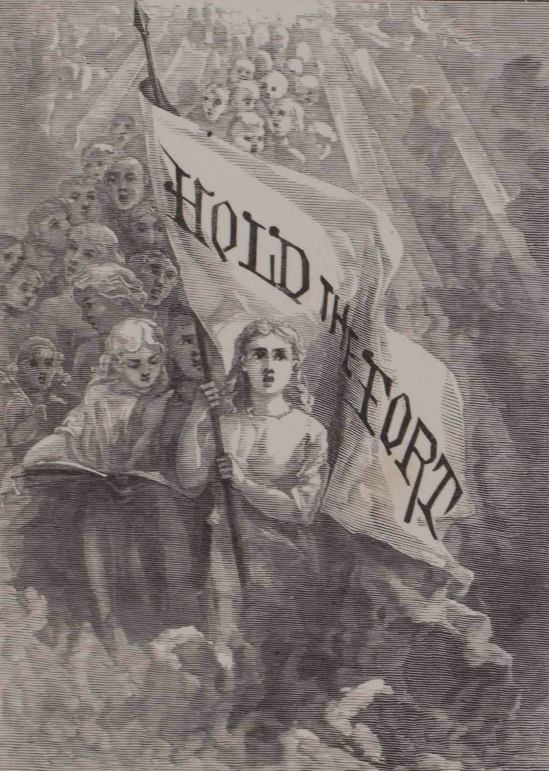 “Hold the fort,” by P.P. Bliss; with illustrations by Miss L.B. Humphrey and Robert Lewis; engraved by John Andrew & Son and S.S. Conant (1877)

In a note that prefaces this imprint, Major D. D. Whittle describe the event which inspired this song, “Hold the Fort.” He relates that during General Sherman’s march to the sea, Union General Corse was in peril of losing an important redoubt to the Confederates when:

At this moment an officer caught sight of a white signal flag, far away across the valley, fifteen miles distant, upon the top of Kenesaw Mountain. The signal was answered, and soon the message was waved across from mountain to mountain: “Hold the Fort; I am coming. W. T. Sherman.” Cheers went up; every man was nerved to the full appreciation of the position; and, under a murderous fire, which killed or wounded more than half the men in the fort – Corse himself being shot three times through the head, Col. Tourtelotte taking command, though himself badly wounded, they held the fort for three hours, until the advanced guard of Sherman’s army came up, and French was obliged to retreat.

No incident of the war illustrates more thrillingly the inspiration imparted by the knowledge of the presence of the Commander; and that he is cognizant of our position; and that, doing our utmost, he will supplant our weakness by speedy reinforcements. So, the message of Sherman to the soldiers of Altoona becomes the message of the Great Commander, who signals ever to all who fight life’s battle, “Hold the Fort.”

The imprint ensues, each page of verse adorned with an illustration.

O! my comrades, see the signal

Waving in the sky!

Mighty men around us falling,

In our Leader’s name we’ll triumph

Fierce and long the battle rages,

But our Help is near;

Wave the answer back to heaven, - 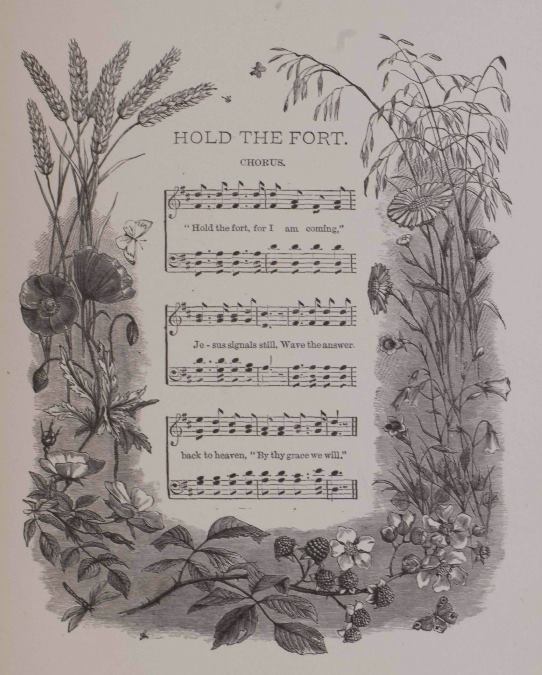 The illustrations are monochromatic and ecstatically conceived. As with the verse, the message is unambiguous: it is the intervention of the Christian messiah that saves the Union forces. 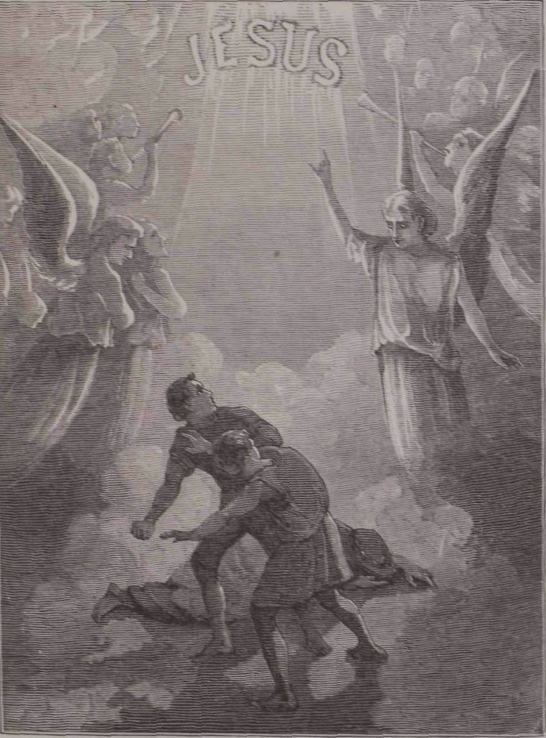 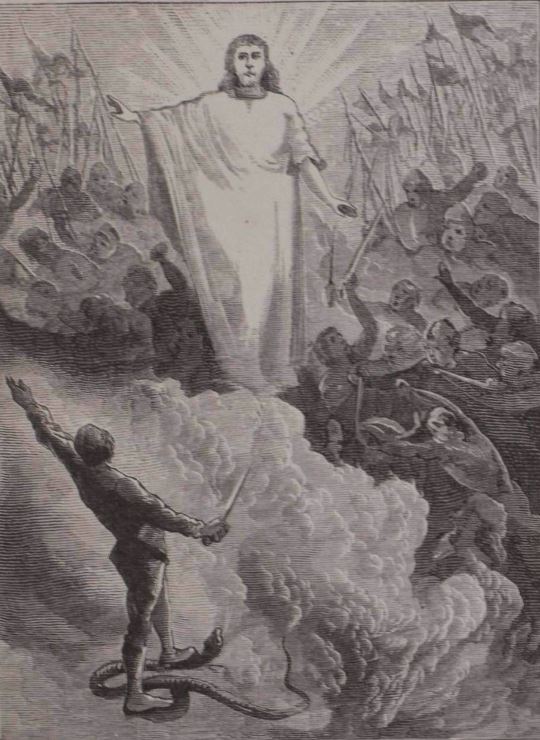 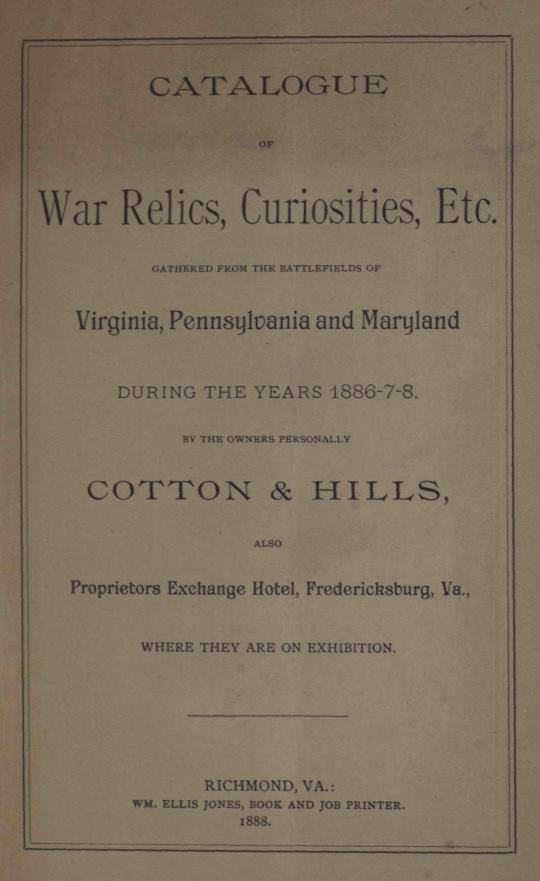 Catalogue of War Relics, Curiosities, etc. Gathered from the Battlefields of Virginia, Pennsylvania and Maryland During the Years 1886-7-8 (1888)

In an earlier release we highlighted the development of battlefield tourism in the years following the Civil War. This imprint is closely related to that business. It is prefaced by an encomium to the charms of Fredericksburg:

Is the most Interesting and most Picturesque

section in America. Many notable events have

occurred here since its foundation, in 1727.

It was the home of the mother of Washington, and the house in which she lived and died still stands. Here, and upon the farm opposite the Rappahannock river, Washington was raised to manhood.

The house of Mrs. Lewis, sister of Washington, built of English brick, is standing, and upon this farm Mother Washington is buried. The half-finished monument to her memory stands a sad and neglected relic of the past.

The “Rising Sun” Hotel (once kept by Gen. Weedon), where General Washington attended Masonic Lodge, is a queer old structure, and interesting to every Mason.

Among other relics of Colonial days are the “Sentry Box,” the home of Colonel Hugh Mercer, and the house once owned by James Monroe.

The war history of Fredericksburg from 1861 to 1864 is of greater interest, as there are thousands yet living who participated in the mighty struggle to which she was a witness.

The purpose of this brochure is to promote the Exchange Hotel and its exhibition of war relics. The catalog offers specific descriptions of each item and its provenance. Each object suggests a story, as seen in these examples:

4. United States Army Blanket, picked up in front of Marye’s Heights (Fredericksburg, Va., battlefield) three days after the battle of December 13, 1862, by Mr. Wm. T. Lowry. It has been in constant use since by members of the family, and then by the servants. It has been washed not less than 300 times. Presented by his son, Mr. Jas. T. Lowry, May, 1888.

8. A pair of Percussion-cap, Muzzle-loading Horse Pistols, with Holsters. These were lost near Clark’s woolen mill, on Main street, Fredericksburg, Va., by one of Colonel Dahlgren’s cavalrymen, November 28, 1862. Dahlgren, with 25 men, had raided across the Rappahannock at Falmouth to feel the confederate position, but was quickly driven back by Corbin’s cavalry. One man was shot near the railroad depot; another was thrown from his horse and lost these pistols….Mr. Samuel Beale, who was then a small boy, picked them up and buried them in a box in the cellar to his mother’s house, where they remained three years.

25. Confederate Haversack, carried three years of the war by Mr. J. W. Row, Company C, 9th Virginia Cavalry. It was made by C. B. Dabney, at Guiney’s Station, Va., and cost $50 in Confederate money.

35. Confederate Soldier’s Shoe, with Wooden Sole….Many were worn by soldiers and citizens, owing to the scarcity of leather.

47. Pair of Lady’s Shoes, with wooden soles; made by a carpenter…for Miss Pearson….the uppers are of painted cloth, fastened to the soles with tacks stayed by a strip of leather…

In total, there are 497 objects described in the catalogue. The final relic is:

497. “The Bullet Splintered Tree.” This Tree was 15 inches in diameter, and stood near the McCoull Farm, in Spotsylvania County, Va., in front of what the Confederates called “The Bloody Bend,” where Gen. Hancock made that memorable charge on May 12, 1864, capturing the assailant point and compelling the surrender of Gen. Edward Johnston, with a number of Confederates. ‘Twas prior to this charge of Hancock’s that this Tree, standing between the contending armies, and near the Confederate works, was literally riddled and torn in shreds by Minnie balls from the Union line of battle. After the war the owner of the land sold the tree to W. J. Moon, and Mr. Moon sold it to its present owner. There is not, therefore, and cannot be any dispute or doubt about the history of the tree or the facts herein stated.

W. J. Moon and J. W. Colbert, both citizens of this place, are personally known to us to be gentlemen of character and reliability. 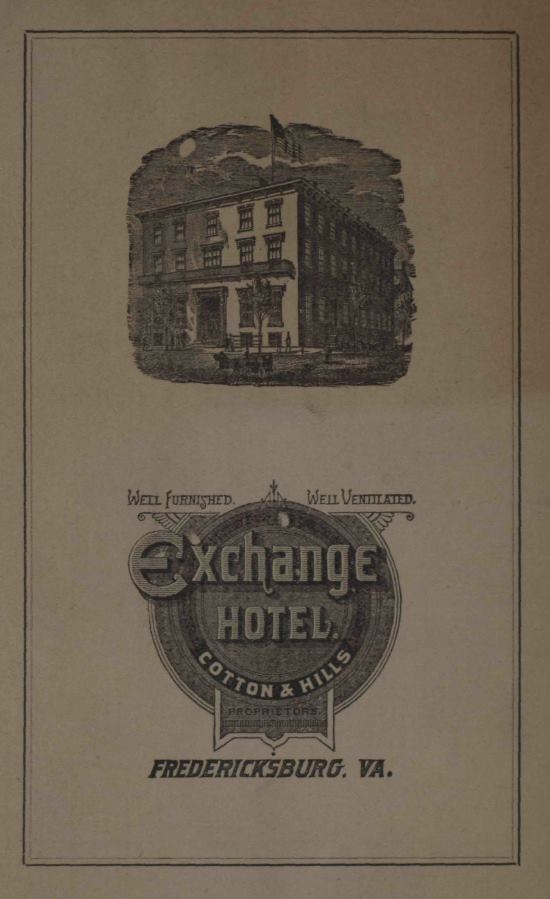