‘A Complication of Evils’: Highlights from Afro-Americana Imprints, 1535-1922

The March release of Afro-Americana Imprints, 1535-1922: From the Library Company of Philadelphia includes an essay by English abolitionist Thomas Clarkson, a multi-volume work on the physical history of mankind by British physician and ethnologist James Cowles Pritchard, and the 20th-anniversary proceedings of the American Anti-Slavery Society with remarks by its president, William Lloyd Garrison.

An Essay on the Comparative Efficiency of Regulation or Abolition, as Applied to the Slave Trade (1789) 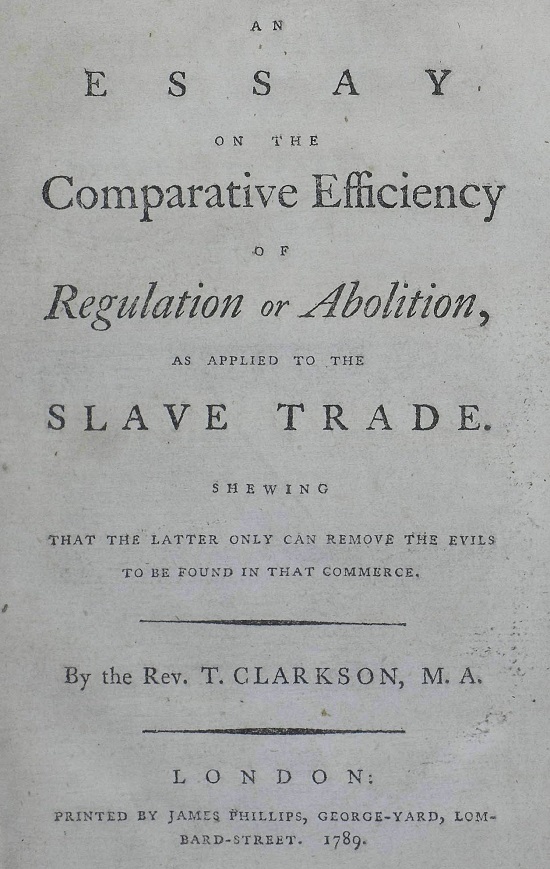 Thomas Clarkson (1760-1846) was a British founder of The Society for Effecting the Abolition of the Slave Trade. Additionally he worked to pass the Slave Trade Act of 1807, which ended the British slave trade. In this 1789 essay, Clarkson writes:

That the Slave-trade contains unavoidably in its own nature, (and still more so according to the present mode of conducting it,) a complication of evils, is a position, which, I trust, that none but slave-merchants will deny.

Clarkson goes on to describe the most often held perspectives on the slave-trade by “persons, according as they are better or less informed.”

Some of them reason thus: “We are at present of opinion, as far as we have had opportunities of gaining any information on this subject, that regulations may be devised, which will effectually remove the evils complained of: but if such can actually be devised (and we heartily wish them adopted) why totally stop the trade?” There are others again, who differ in opinion from the former, and who think that any regulations, under which the trade can be put, will be inefficient, and that the abolition of it only will answer the proposed end. There are others again, who, though sensible of the evil, are, for want of information, in doubt concerning the best method of proceeding in the case.

Offering the purpose of his writing, he continues:

It is my intention then, in the present essay, to offer to the three descriptions of people now mentioned, such loose hints, as have occurred to me, while I have been reflecting upon this question, and such as, being probably new, and throwing new light upon it, may induce those who have already formed an opinion, either more strongly to retain or reject the same, and may induce the doubtful to take a decided part.

Researches into the Physical History of Mankind (1837) 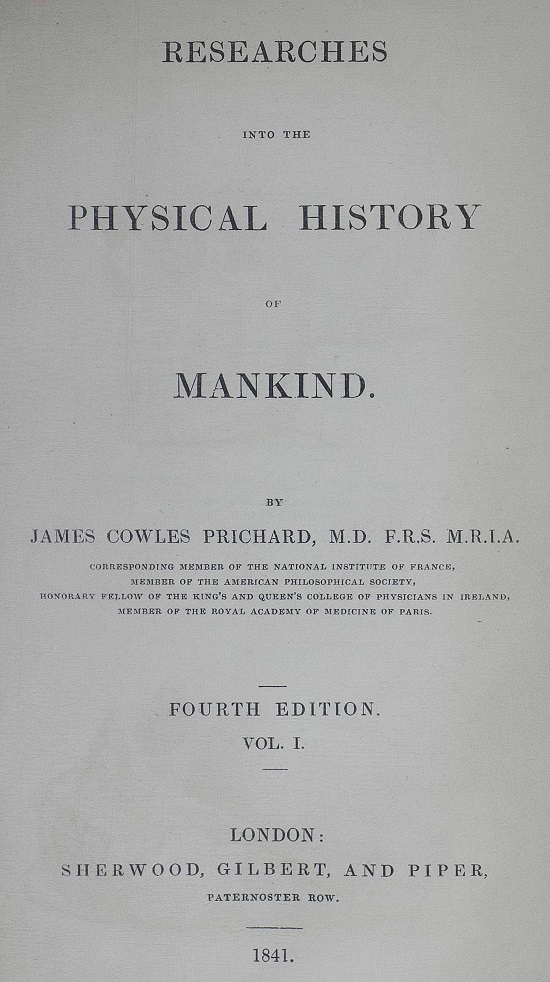 James Cowles Prichard (1786-1848) was a British physician and ethnologist. The crux of his influential work, which by its third edition had grown to these five volumes, is the unity of the human species. Arguing toward that conclusion and critiquing the alternative argument, Prichard writes:

It has been supposed by some that the Negro race is of shorter life than the European.

Dr. Winterbottom informs us, that “few of the inhabitants of Guinea arrive at old age.” He says, that “they all turn old much sooner than Europeans, and appear in a state of decrepitude when the latter have scarcely reached the grand climacteric.” M. Adanson makes a similar remark of the natives of Senegambia. “The Negroes of Senegal,” he says, “are really old at the age of forty-five, and sometimes earlier.” Accounts of the same purport are given by Bosman and others, respecting the natives of Guinea and Congo.

The shortness of life observed among the Africans by these authors, appears to be the result of circumstances. The condition of savages, their exposure to noxious influences, and the particular situation of these tribes on the African coast sufficiently accounts for the fact, without the supposition of any peculiarity in the race.

In volume two Prichard examines the question, “whether the Physical Characters of human Races are in Africa permanent, or liable to variation?” Noting the broader context, he begins his thoughts by observing:

The inquiry above stated is more important with respect to the history of mankind, than even that which relates to the connexion of physical characters with local circumstances.

Before I proceed to point out the instances of variation which can be traced among the African races, it may be useful to attend to the following consideration.

The dark-coloured nations of Africa do not appear to form a distinct race, or a distinct kind of people, separated among themselves, such as we ideally represent under the term Negro. There is, perhaps, not one tribe in which all the characters ascribed to the Negro are found in the

highest degree, and in general they are distributed to different races in all manners of ways, and combined in each instance with more or fewer of the characters belonging to the European or the Asiatic. 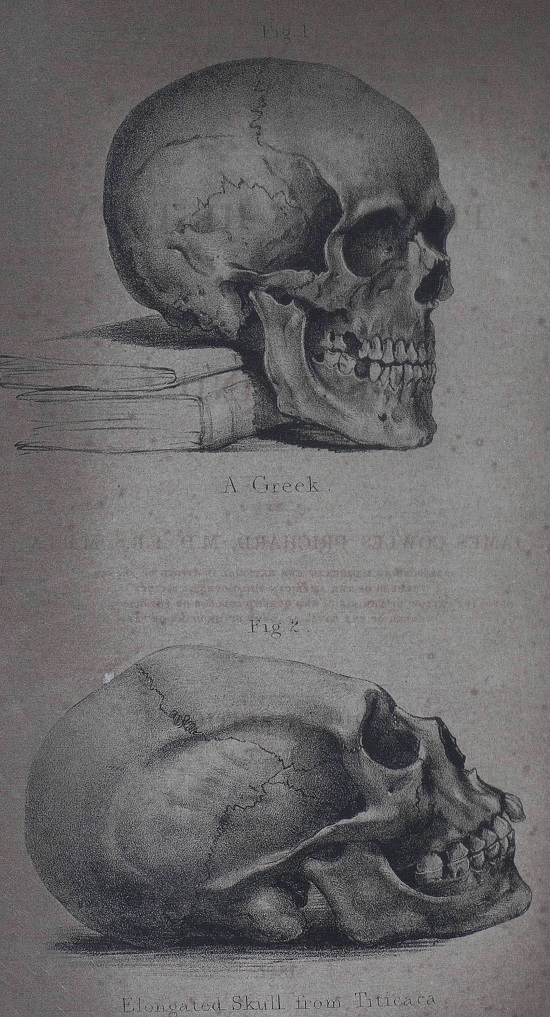 Proceedings of the American Anti-Slavery Society (1854) 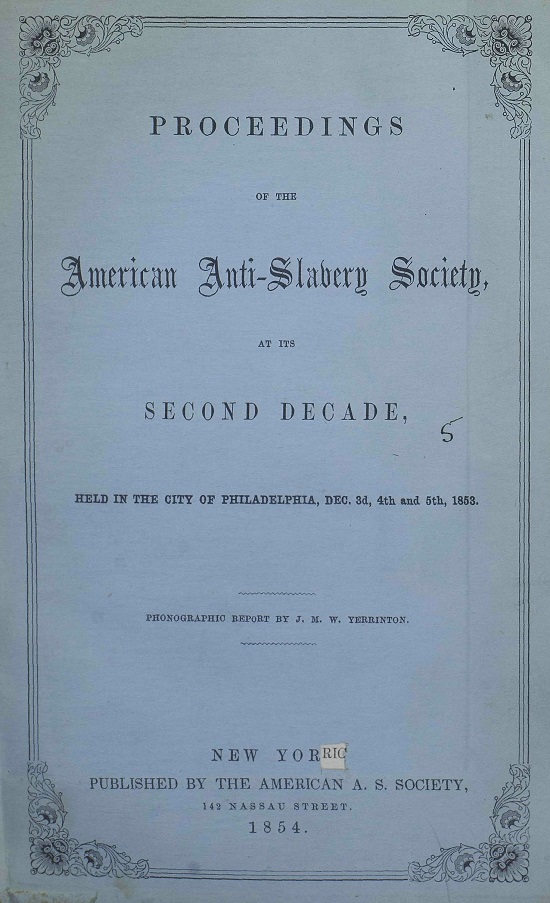 The American Anti-Slavery Society celebrated its 20th anniversary in Philadelphia on Dec. 3rd, 4th, and 5th, 1853. The society’s president, William Lloyd Garrison, introduced the ceremonies with an address.

Our movement is not sectional or geographical but world-wide in its principles, affecting all the hopes and interests of humanity, and indissolubly connected with the freedom of mankind. It does not relate to the color of the skin, but to the value of a man. It is not the antagonism of the North against the South, but of Liberty against Slavery.

Since this Society was organized, probably not less than twelve hundred thousand new victims have been added to the slave population of our land; the whole number of which, at the present time – THREE MILLIONS AND A HALF – surpasses that of the inhabitants of Pennsylvania! One hundred thousand babes are annually born at the South, and doomed to live and die as chattels personal and marketable articles. This is the prostration and annihilation of every thing which honors, exalts, and really constitutes humanity; for the slave is an extinct man.

Garrison describes the work of the Society and the changes he’s seen. He argues that in having to defend America’s peculiar institution the South’s true sentiment has been exposed.

No longer do we hear the hypocritical lament that Slavery is a great evil, from the lips of men who are doing everything in their power to uphold it. The disguise is stripped off. Slavery is now justified in State and Church as a good thing—a right thing—an institution in accordance with justice and love, and with the Bible as the revealed will of God!...This is, indeed, in many respects, a sad picture. Yet is it ever better to know our opponents, and to see them stripped of all disguise, than to submit to deception, and be led astray from the path of duty. But if foes have been unmasked and developed, so, on the other hand, have friends been multiplied, and that greatly, on both sides of the Atlantic. And such friends! how true, how stanch, how clear-sighted! Will they ever be discouraged? Never. Will they lay down their arms till the victory is won? Never. They will continue to labor in faith, and in patience, and with such love in their hearts as calls forth hope in the breast of the slave, and brings nearer the day of jubilee. God grant that it may be very near!