‘The Corrupt and Imbecile Administration’: Highlights from The American Civil War Collection, 1860-1922

The March release of The American Civil War Collection, 1860-1922: From the American Antiquarian Society includes speeches delivered in a Massachusetts church exalting the nation, in the Tennessee House of Representatives describing a conspiracy that divided the country, and in the U.S. Senate asking a fundamental question of the country’s citizenry.

De Profundis Clamavi: The Cause, the Crime, and the Cure of our National Suicide (1861) 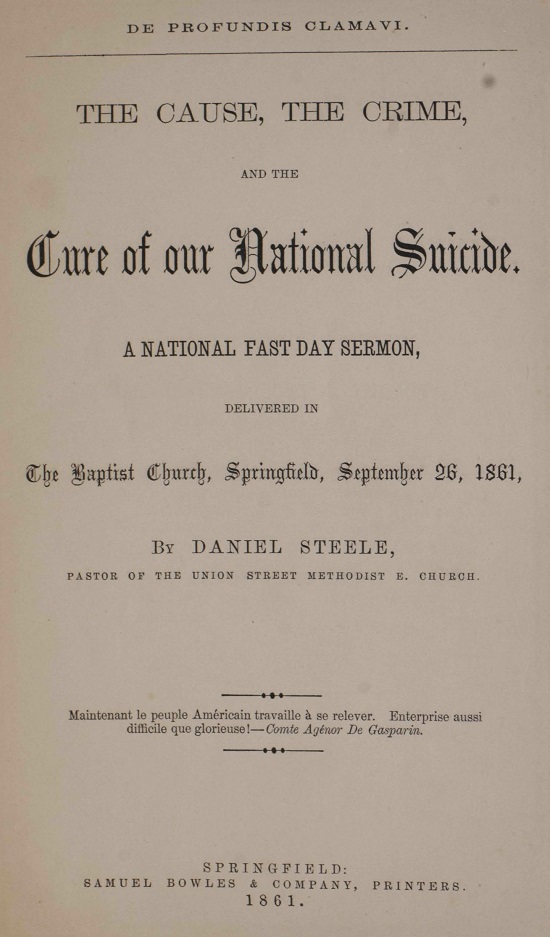 Nationality magnifies and exalts the insignificant individual, crowns him with dignity and honor, throws an arm of protecting power about him, and holds a broad shield over his defenseless head.

Steele then presents the first of several comparisons he uses to illustrate American superiority.

As we have sat beneath the over-arching dome of the great temple of constitutional liberty, and have contemplated the weakness and insecurity of the South American republics, and the annual bloody political convulsions of Mexico, we have often exclaimed, Thank God, I am an AMERICAN citizen. As we have looked abroad across the Atlantic, and surveyed abject Italy, groaning beneath papal usurpations, “Conquered or conquering, still alike a slave,” and “the dying man,” Turkey, bolstered up by the allied powers till they can agree to a partition of his estate, and Hungarian liberty trampled beneath the feet of the imperious Hapsburgs, and a French republic twice throttled in its cradle by the unscrupulous Napoleons, and poor, demented Spain sitting amid the faded glories of her former grandeur, receiving her just recompense for grinding like blind Sampson for three hundred years in the mill of the Inquisition, and Erin’s Isle beneath the hoof of the Unicorn, and haughty Britannia herself crouching down like a strong ass between the two burdens of a four-billion debt and a pampered aristocracy and a pensioned priesthood;—when this panorama of European civilization has passed before our eyes, we have again exclaimed, with hearts swelling with generous gratitude and ingenuous pride, Thank God, I am an AMERICAN citizen.

Recalling failed empires of the past, Steele continues:

…Jerusalem thrice laid in heaps, and Greece, the mother of arts and eloquence, entombed in the ruins of her own Parthenon, and Carthage a habitation of owls, and world-ruling Rome, like gouty age, “in lean and slippered pantaloon,” halting to the grave dug by his own debaucheries…

Comparing the citizenry of other countries to Americans, Steele states:

A nation is the incarnation of an idea. Ideas are immortal. From age to age, finding a local habitation and a name, they continue to distinguish those in whom they reside, and to separate them from the rest of the world, by well-defined characteristics. A very large reverence for the Levitical ritual, combined with small conscientiousness and marvelous keenness of scent to detect the hiding-places of money, constitute the Jew. Intense religious bigotry, mingled in a certain proportion with the spirit of chivalry, love of adventure, and a propensity to get gold by the dice-box, make the Spaniard of to-day a fac-simile of the race who hunted the Moors from Grenada three centuries ago. A passion for military glory, spiced with vivacity, epicureanism, and indifference to the law of chastity, proves that the Frenchman in the day of Napoleon III., is descendant of the Gaul who fought Julius Caesar. The Massachusetts men who cut their way through Baltimore, April 19th, 1861, prove by their promptness to man the post of danger, that they are sons of the men who, in another century, on another 19th of April, “fired the shot heard round the world,” and precipitated the American Revolution. It would seem, then, that so long as a nation is left to the undisturbed perpetuation of its peculiarities, it cannot die, unless the idea which animates it departs like the spirit from the body.

Oration of the Hon. Jordan Stokes, on the Great Conspiracy, Rebellion and Civil War in the United States (1862) 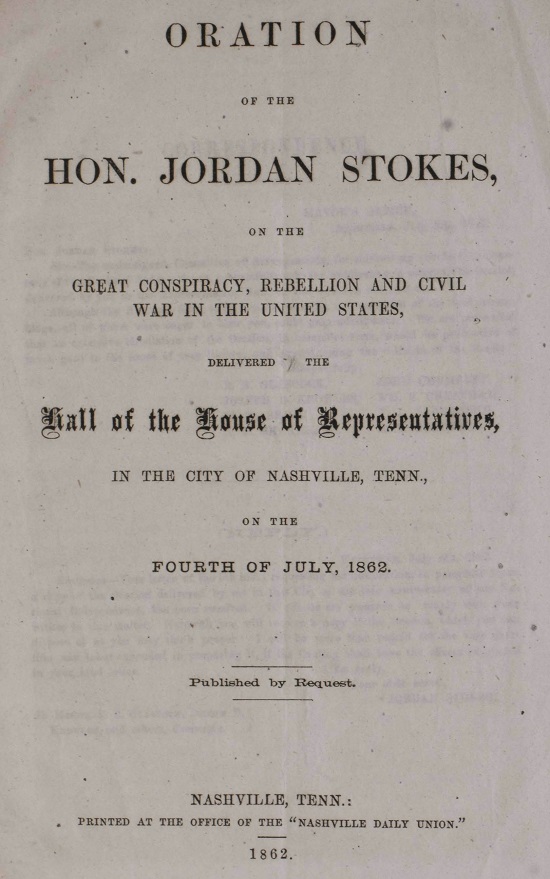 One the Fourth of July, 1862, Jordan Stokes (1817-1886) spoke in the hall of the House of Representatives in Nashville, Tennessee. Commemorating the day, the former Speaker of the Tennessee House begins:

The memorable day we celebrate, with its cherished recollections, its sacred mementoes, its rich clusters of heroic deeds, its intimate connection with classic battle-fields, and with the first triumph of American Liberty, has come down to us embalmed in the tears and hallowed with the prayers of nearly three generations. It is the birthday of American Independence; it is the honored jubilee of free government; it has been celebrated in this country and in all other countries where the votaries of Liberty were permitted to assemble, for eighty-six years; and it will be celebrated on its annual return by numberless generations yet unborn, with appropriate honors and ceremonies.

Turning to the causes of the current conflict, Stokes continues:

It will not be inappropriate on this day to discuss before this assemblage the Great Conspiracy, and the Rebellion and Civil War it has brought on the country; and in coming to the consideration of the sad and absorbing theme, let us invoke the calm attention and serious judgment of every lover of good government.

Ever since the overthrow of nullification there has existed a party of ambitious and selfish politicians in the State of South Carolina, who have toiled day and night to dismember the Union and establish a separate government for the slave States. Having failed in this purpose with the tariff issue, they seized the slavery question in accordance with the prophecy of General Jackson, with the ceaseless agitation of which they hoped to “fire the Southern heart,” and bring about a general and united action. The fanatical abolitionists and anti-slavery men in the North, who are next in point of responsibility, and but little inferior in guilt with the arch-conspirators in the South, had furnished at stated periods ample materials to keep alive the growing and increasing flames; and the prostrate fortunes of the Democratic party under the corrupt and imbecile Administration of President Buchanan made the selfish leaders of that party in the South active coworkers in the schemes of the original disunionists. These selfish and ambitious men filled high places in the Cabinet, were distinguished Senators and Representatives in Congress, and were the Governors of all the Southern States with the exceptions of Maryland and the little State of Delaware, resting as they did under a solemn oath to support the Constitution of the United States during the term of their public service. They held secret midnight counsels in and out of the Capital, concocted and matured a deep and desperate scheme to break up the Union, assigned to each conspirator his part and went to work in fearful earnest to execute the wicked plot. 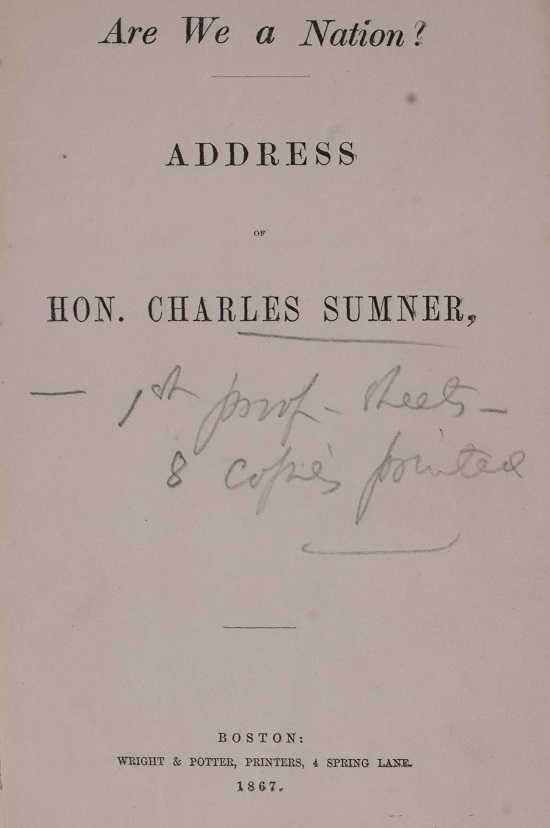 Speaking from the floor of the U.S. Senate in 1867, Charles Sumner (1811-1874) identifies an underlying source of the Civil War and ongoing obstacle to national unity.

At the close of a bloody Rebellion, prompted by hostility to the sacred principles of the Declaration of Independence, and inaugurated in the name of State Rights, it becomes us now to do what we can to provide that these sacred principles shall not again be called in question, and that the fatal pretension of State Rights shall not again disturb the national repose. One terrible war is more than enough; and since, after struggle, peril and sacrifice, where every household has been a sufferer, we are at last victorious, it is not too much to insist on all possible safeguards for the future. The whole case must be settled now. The constant Duel between the Nation and the States must cease. The National Unity must be assured,—in the only way which is practical and honest,—through the principles declared by our Fathers and inwoven into the national life.

In one word, the Declaration of Independence must be recognized as a fundamental law, and State Rights, in all their denationalizing pretensions, must be trampled out forever, to the end that we may be in reality as in name, a Nation.

To learn more about bringing this digital collection to your institution, please contact Readex Marketing.