‘A covenant with death, an agreement with hell’: Highlights from Afro-Americana Imprints, 1535-1922

This year’s first release of Afro-Americana Imprints, 1535-1922: From the Library Company of Philadelphia includes a work of American travel literature from the 1830s and a history of the United States containing, in part, a retrospective of that same period and of resistance to America’s peculiar institution during it. Also found in this month’s release is a collection of essays on morality that address slavery.

Tyrone Power (1797-1841) was born in Waterford County, Ireland. In his teens Power joined a group of travelling actors and went on to successfully earn a living acting at the leading London theatres and appearing at the Theatre Royal in Dublin. He travelled to the United States several times and recorded his Impressions during journeys made in the early 1830s.

Power offers this description of his arrival in Richmond, Virginia:

Whilst waiting at the landing-place amidst the bustle incident to shifting baggage, landing passengers, and packing carriages, I witnessed a wedding assemblage that amused me highly, and was no bad sample of slavery in the Old Dominion.

From a large hut close to where we were set ashore poured forth a bevy of beauty of all colours, from the deepest jet up to the quadroon just tinged with amber. They were for the most part dressed in white, many having expensive scarfs of gay colours, and all wearing wreaths and bouquets of the most beautiful flowers, tastefully arranged and put on. I had only time to learn that it was a wedding-party, and to “guess” at the bride.  I hit upon a plump, roguish-looking little devil, having a skin like new copper, teeth of pearl, and eyes as “Kilkenny’s own coal.” She was, I observed, the center of the many-tinted circle, and wore, moreover, a wreath composed of the pearl-like waxberry in her jetty hair.

These, as I was informed, were all slaves; certainly a merrier-looking party I never saw of white folk, and, for this occasion, their chain was literally hidden under wreaths of roses; for a day, at least, they were very happy, and who amongst the freest can count on what the morrow may bring forth!

Suggesting the institution of slavery was misunderstood and misrepresented, Power continues:

This was the first glance I had been allowed of the Virginian agricultural slave, and I was not ill-pleased to be presented with the bright side of a condition which, to the mind of the philanthropist of every land, is sufficiently painful without the exaggerations of the political quack, or the fanatic outcry of the sectarian bigot seeking to preach a crusade of extermination against men whose slaves form their only inheritance, himself, mean time, for the most selfish ends, daily planning how best to enslave the mental part of those whose credulity and weakness expose them for a prey.

Power then shifts to offer his sympathy to the slaveowners:

There are few proprietors, at this day, more to be pitied than the large planters of Virginia and the Carolinas; as high-spirited, generous a race as may anywhere be encountered, but much weighed down of late by the pressure of circumstances which they cannot control, and which every year threatens to render more heavy, unless, through some miraculous interposition, the growing causes be removed or checked. The very slave property, for the inherited possession of which they are abused, is becoming in many cases a burden.

Essays on the Principles of Morality (1843) 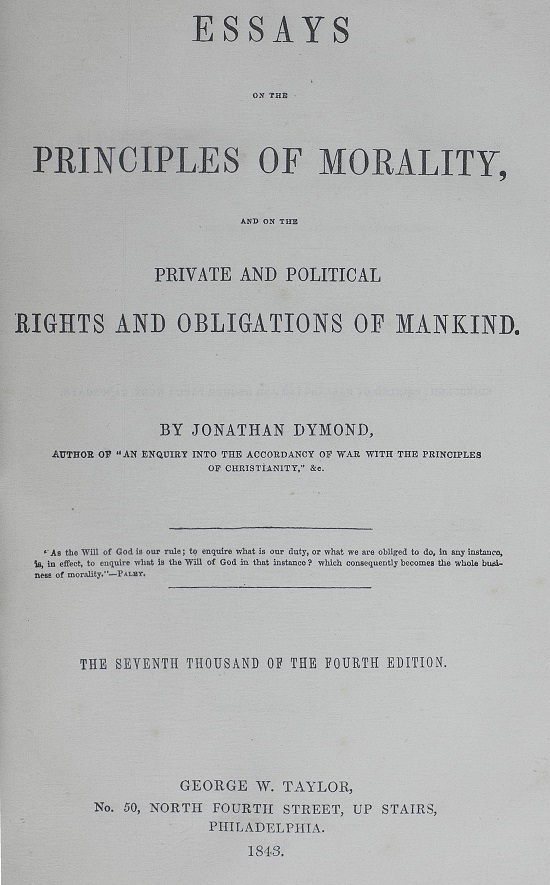 Jonathan Dymond (1796-1828) was a Quaker and ethical philosopher. Although he had little formal education, he read and wrote essays on moral problems when not working in his father’s shop in County Devon, England.

Dymond, looking forward, writes hopefully on the subject of slavery:

At a future day it will probably become a subject of wonder how it could have happened that upon such a subject as Slavery men could have enquired, and examined, and debated, year after year; and that many years actually passed before the minds of a nation so fully convinced of its enormity, and of their consequent duty to abolish it, as to suppress it to the utmost of their power. I say this will probably be a subject of wonder; because the question is so simple, that he who simply applies the requisitions of the Moral Law finds no time for reasoning of for doubt. The question, as soon as it is proposed, is decided.

The cause is, that men do not agree as to the rule of decision – as to the test by which the question should be examined. One talks of the right to property – one of the interests of merchants – one of safety – one of policy – all of which are valid and proper considerations; but they are not the primary consideration. The first question is, Is Slavery right? Is it consistent with the Moral Law?

History of the United States of America (1904) 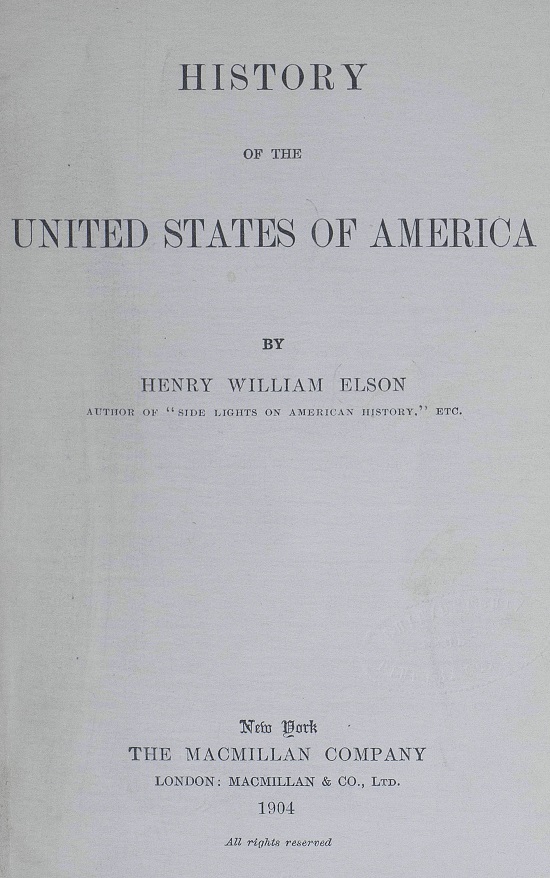 Historian Henry William Elson (1857-1935) begins by writing of the period well before the formation of the United States, going back as far as Columbus and De Soto. Following chapters on the American Revolution, the penning of the Constitution, and the presidencies of Jefferson and Jackson, Elson delves into the “Rise of the Slavery Question.” Here Elson writes about abolitionists Benjamin Lundy and William Lloyd Garrison:

During this period there were a few, a rare few, who, like the ancient prophets of Israel, ceased not to cry out day and night against the evil of the land. First among these was Benjamin Lundy. A saddler by trade, he worked for many years at Wheeling, Virginia, until his interest in the black man became so overmastering that he determined to give his life to the cause of emancipation….He traveled in nearly all the states of the Union, in Canada, Mexico, and the West Indies, in the interest of the cause he had espoused. In 1821 he established The Genius of Universal Emancipation. In one of his tours to New England, Lundy met at a boarding house a young man of ardent spirit, who became a convert and a co-worker with him in the cause…

Here in 1831 he founded The Liberator, and in it he denounced all slaveholders with unsparing severity. He demanded the unconditional emancipation of all slaves, and pronounced the Constitution, for permitting slavery, “A covenant with death, an agreement with hell.”

There was a rising sentiment against slavery in the North, but it was not yet strong nor widespread. Two or three incidents will readily show that the sympathies of the people were generally with the slaveholder, whose desire was to keep the black man in ignorance, that he might not become dangerous.