‘An Executive of Tried Experience and National Views’: Highlights from Afro-Americana Imprints, 1535-1922

The September release of Afro-Americana Imprints, 1535-1922: From the Library Company of Philadelphia includes an early U.S. history text that covers the introduction of slavery to the colonies, an 1835 copy of The Quarterly Anti-Slavery Magazine, and a call for centrism in the 1856 presidential election. 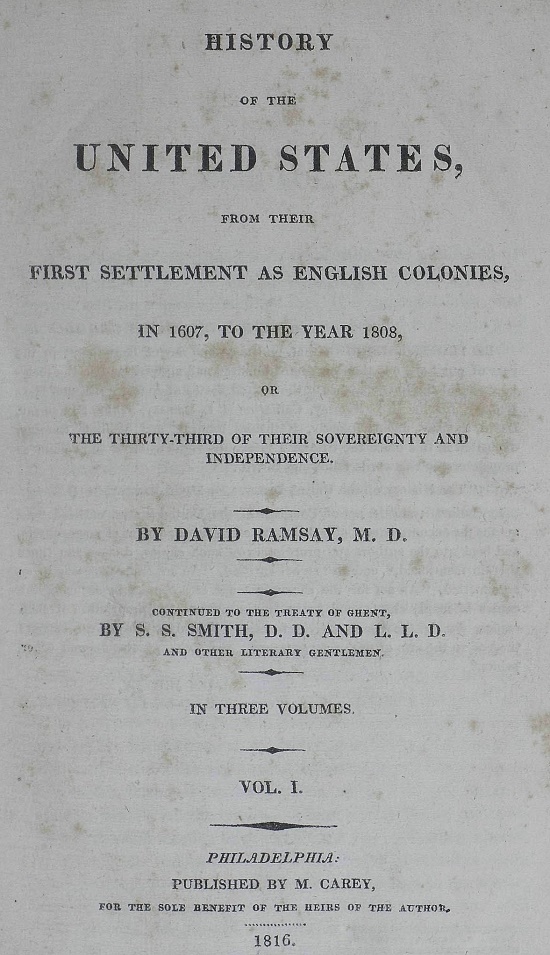 David Ramsay (1749-1815) served in the South Carolina legislature during the Revolutionary War and was later a delegate to the Continental Congress. In this work he explores the history of the country from its colonial days to the first decade of the 19th century. While describing the introduction of slavery to the colonies, Ramsay, a practicing physician, points to distinctions between the North and South.

…the principal ground of difference on this head…arose, less from religious principles, than from climate, and local circumstances. In the former, they found it to be their interest to cultivate their lands with white men, in the latter, with those of an opposite color. The stagnant waters, and low lands, so frequent on the shores of Maryland and Virginia, and on the coasts, and near the rivers in the southern provinces, generate diseases, which are more fatal to whites than blacks.

It is certain, that a great part of the low country…must have remained without cultivation, if it had not been cultivated by black men. From the natural state of the country, domestic slavery seemed to be forced on the southern provinces. It favored cultivation, but produced many baneful consequences. It was particularly hostile to the proper education of youth. Industry, temperance, and abstinence, virtues essential to the health and vigor of both mind and body, were with difficulty practiced, where the labor of slaves procured an abundance, not only of the necessaries, but of the delicacies of life, and where daily opportunities and facilities were offered, for early, excessive, and enervating indulgences. Slavery also led to the monopoly of land, in the hands of a few. It impeded the introduction of laboring freemen, and of course diminished the capacity of the country for active defense; and at the same time endangered internal tranquility, by multiplying a species of inhabitants, who had no interest in the soil. 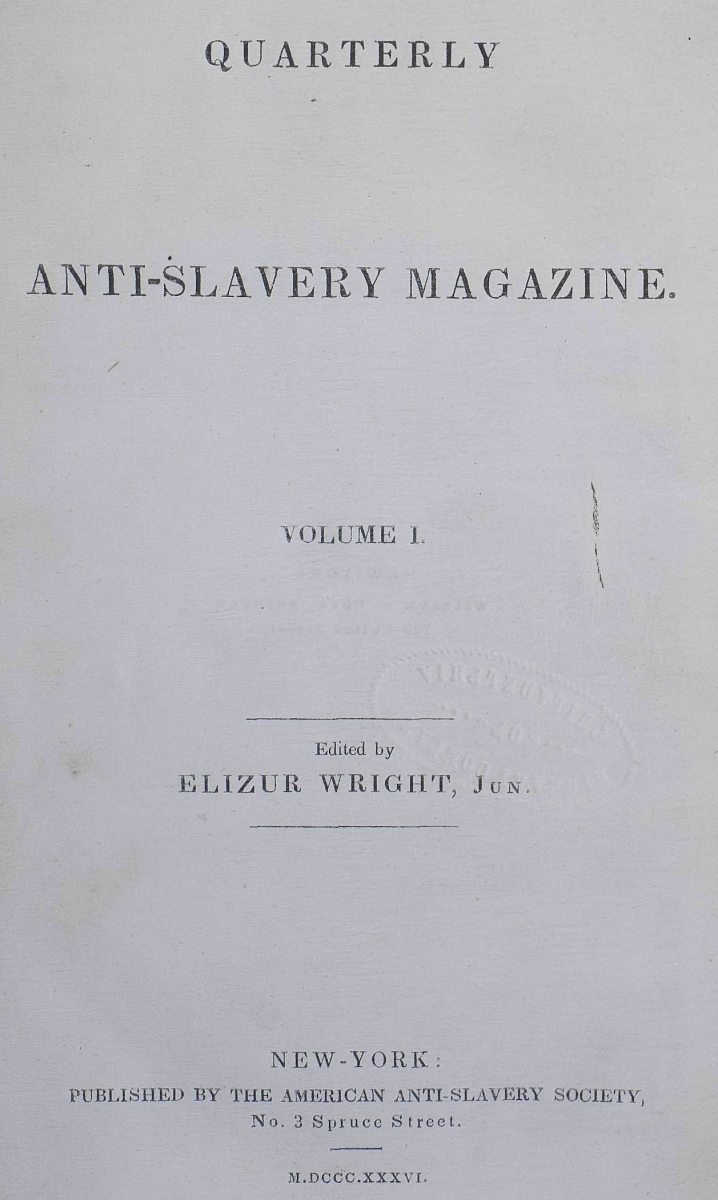 Elizur Wright (1804-1885) was an abolitionist and mathematician. A founder of the American Anti-Slavery Society, Wright served as its national secretary for five years and took part in the Great Postal Campaign which distributed abolitionist literature across the U.S.

Among the articles in this edition of the “Quarterly Anti-Slavery Magazine” is Slavery Tested by Its Own Code by William Goodell (1792-1878). Goodell compares America’s peculiar institution to piracy. 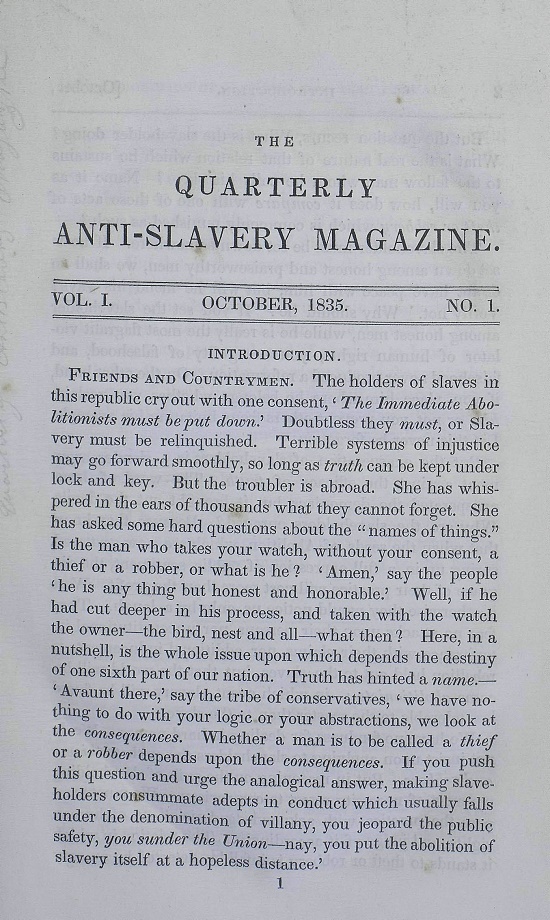 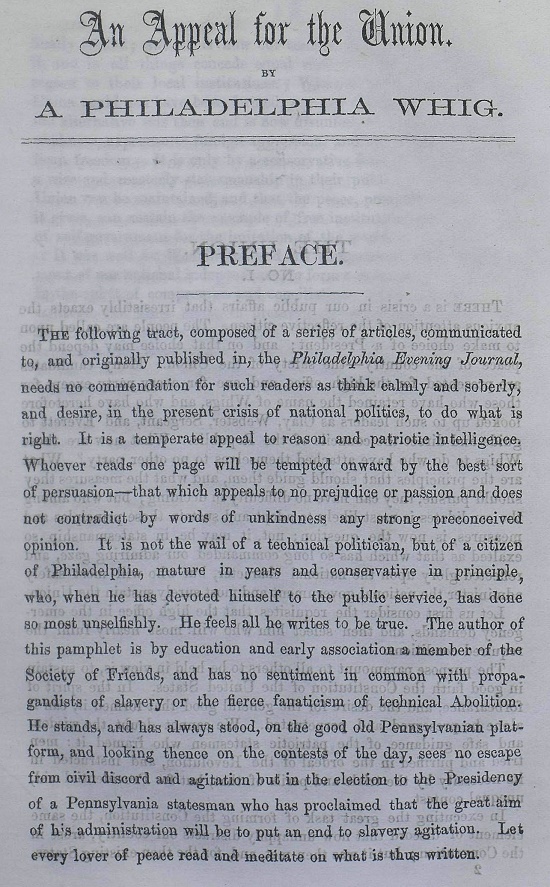 By a Philadelphia Whig

A Philadelphia Whig introduces his tract, which was originally published in the Philadelphia Evening Journal, by calling on his readers “in the present crisis of national politics, to do what is right.” His “temperate appeal to reason and patriotic intelligence” is an appeal to his fellow Whigs who, without a party candidate, remain undecided in the 1856 presidential election.

What now are those Whigs to do who have attached themselves to no other party? What are the principles that should guide them, and what the measures they should pursue, they can have no difficulty in deciding; but who among the candidates is most likely to adopt and sustain those principles and measures, is now the question; not, it may be, in statesmanship so exalted as that which has so long commanded our admiring gaze, and reflected glory upon the national character, but who will most safely administer the national government and most surely sustain the Union.

Appealing to a spirit of compromise, the author writes:

Those nominations of candidates…which partake of a sectional character—that array one portion of the people against another—that would form an administration of the General Government to favor the views of one portion of the country, at the sacrifice of the security of the local laws and institutions of another—cannot but tend to dissever the Union, endanger the peace of the country, and bring into peril the Federal Government. It is no sufficient answer for one section to say that the other was the aggressor, and that wrong and usurpation must be met by resistance. Crimination and recrimination, action and reaction, have been so often repeated, and each wrong provoked to a greater, until a conflict of arms has ensued….Let us not, then, elect an executive that shall aggravate existing evils; let us not establish a government representing the feelings of a part of the country, to carry out the inflammatory views of a section; but an executive of tried experience and national views, who, governed by the Constitution, shall know no preference for any section in the administration of national affairs—a government representing and holding an equal balance over the whole country, and nothing less than the whole country.

For more information about Afro-Americana Imprints, 1535-1922, including pricing for your institution, please contact Readex Marketing.