‘To kill a man for rumple groans’: Highlights from an American Antiquarian Supplement to Early American Imprints, 1801-1819

The May release of Early American Imprints, Series II: Supplement 2 from the American Antiquarian Society includes many exceptionally rare imprints. Among them are an illustrated early reader presenting the “inhabitants of the world,” a novella about virtue rewarded, and a comic account of a clever Scotsman who entertained and defied King James VI. 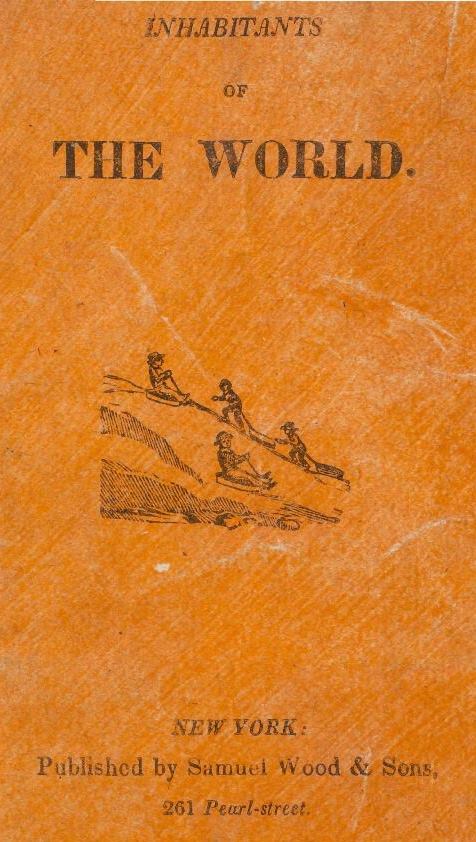 Inhabitants of the World, Alphabetically Arranged (1818) 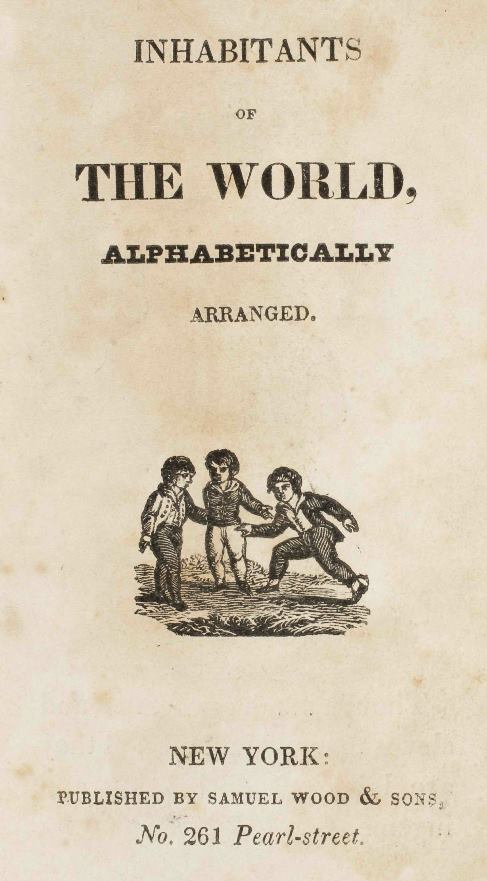 This imprint was donated to the American Antiquarian Society by James d’Alté Aldridge Welch (1907-1970) who was a noted collector of early American children’s books and who published bibliographies of this genre. One of the extremely rare works he donated to the society, “Inhabitants of the World” has an entry for each letter of the alphabet. Every entry has a handsome illustration and a brief description. Naturally, we begin with A.

Though much oppressed, and slaves to many nations, yet they are laborious, forbearing, and ingenious. 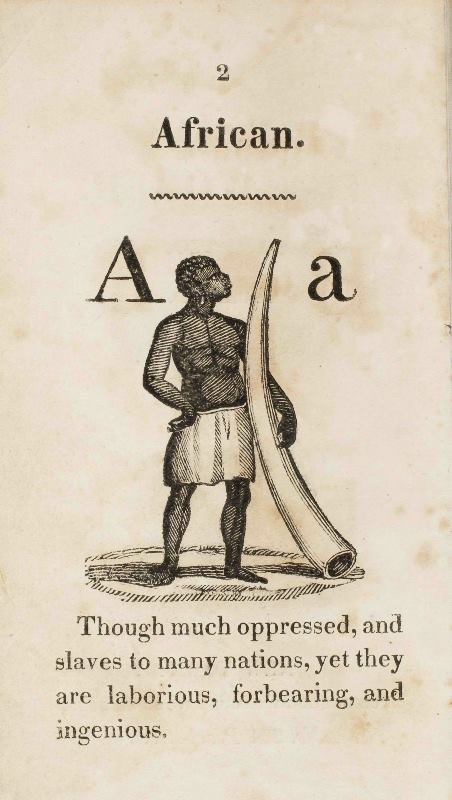 He lives in a pleasant, warm country, abounding with fruits and choice things. 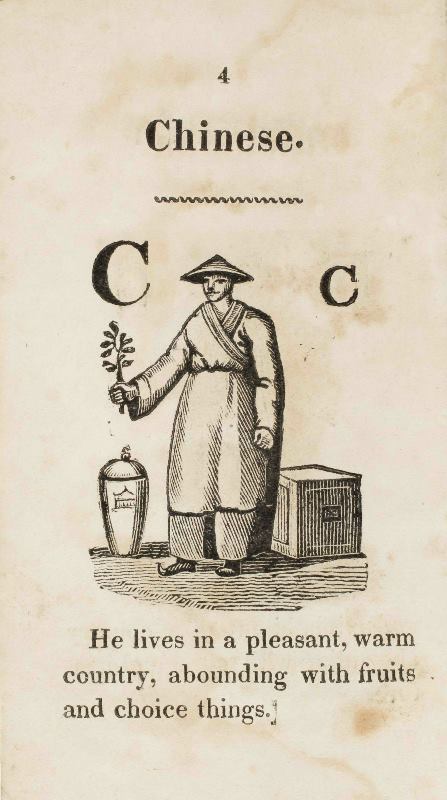 A commercial people, fond of wealth and power to the greatest extent. 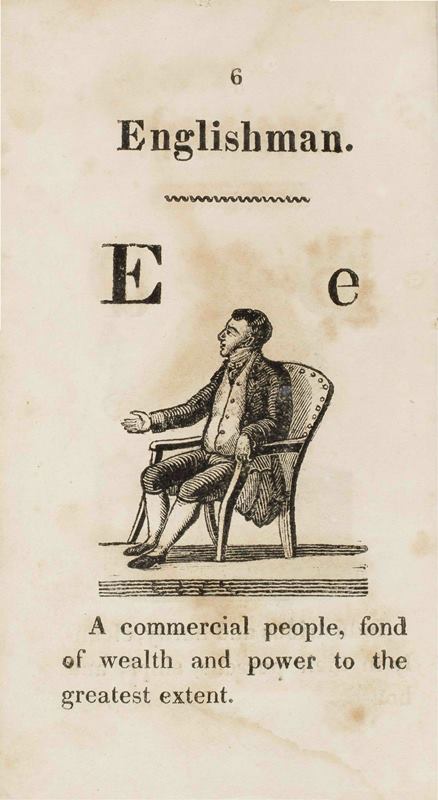 He is of a changeable disposition, and fond of amusement to excess. 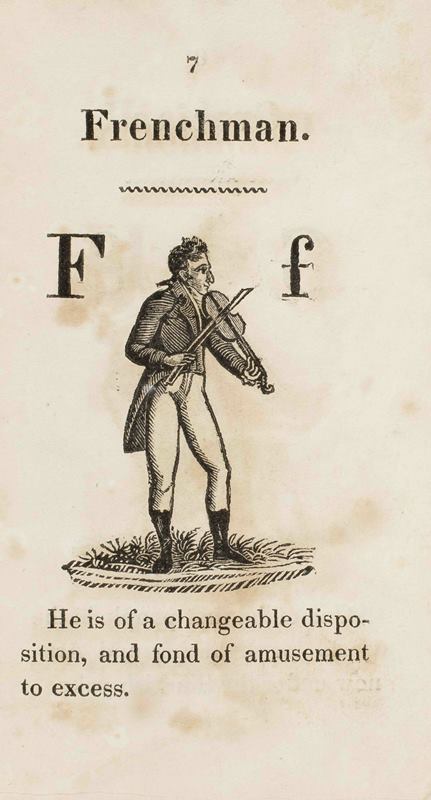 Fine images the Italian sells; he might be much more usefully employed. 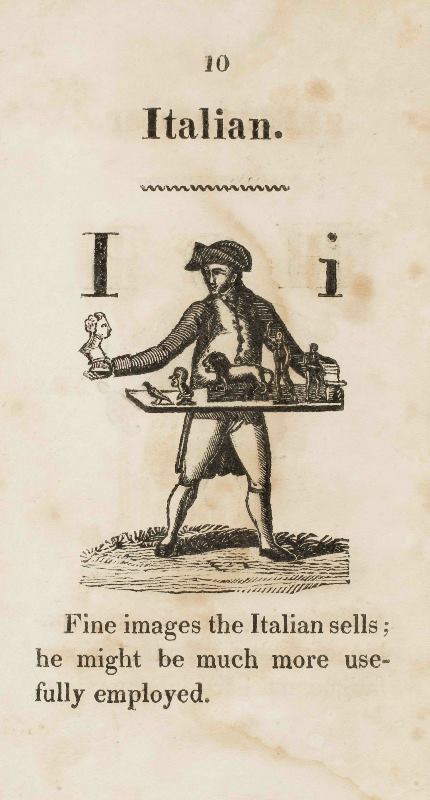 A native of Russia, drawn on a sledge, and wrapped in fur. 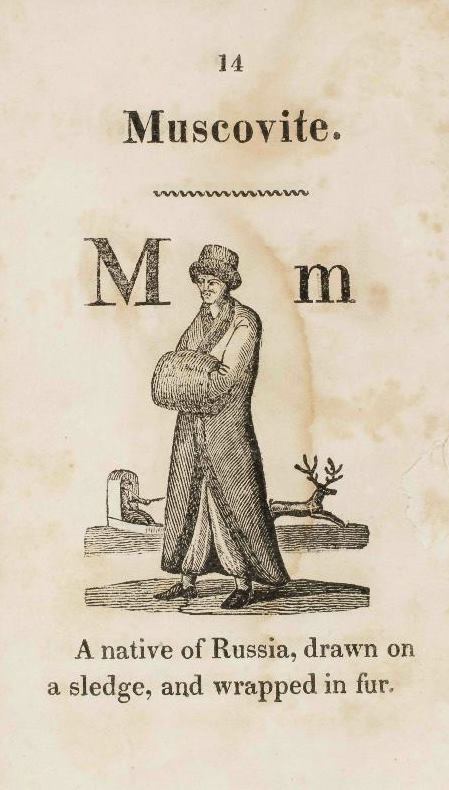 The Norwegians are frank, open, and undaunted, yet paying proper respect. 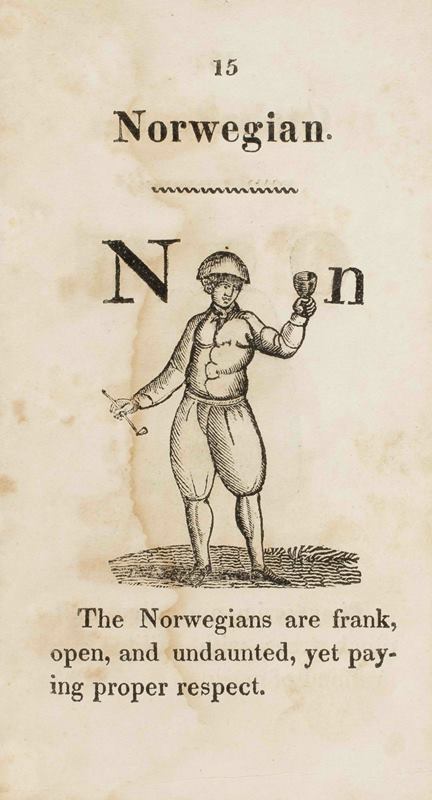 An industrious people, curious in weaving, &c. but fond of the sports of the field. 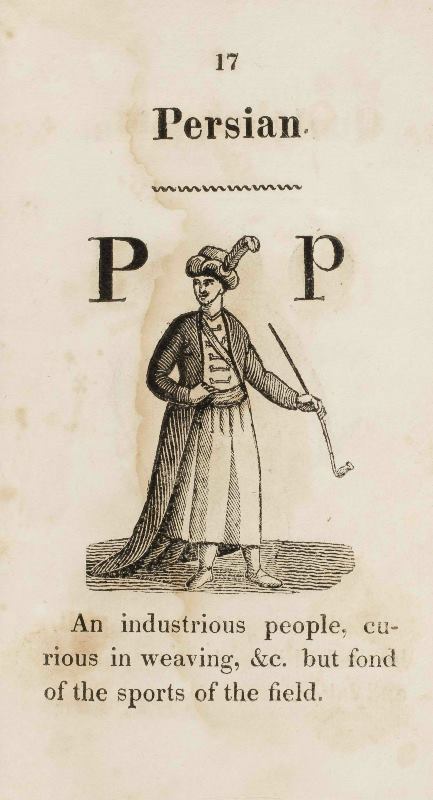 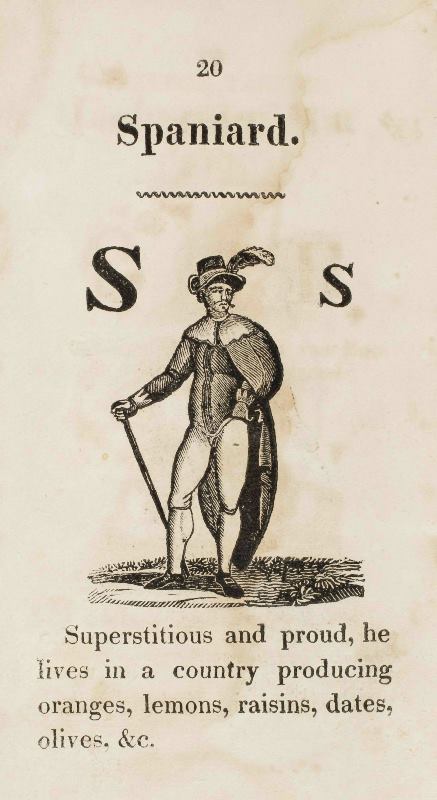 The Turks are mostly Mahometans, and smoke and chew opium till they are intoxicated. 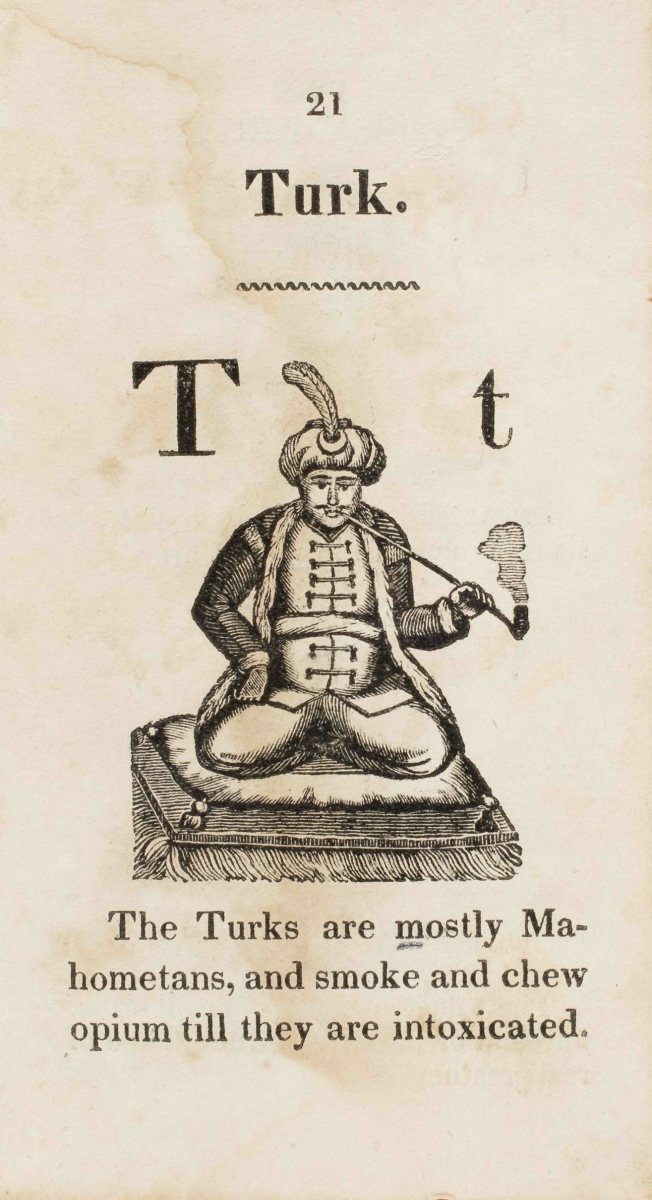 It is not difficult to perceive a cultural bias in these descriptions. This bias does not extend to the illustrations which represent all of the people in a generally flattering light. Some of the people are not generally familiar to contemporary readers. These include Bohemians, Janizaries (members of an elite Turkish guards), Kamtschatkans (from far eastern Russia), and Otaheiteans (Tahitians).

Julia or The Adventures of a Curate’s Daughter (1802) 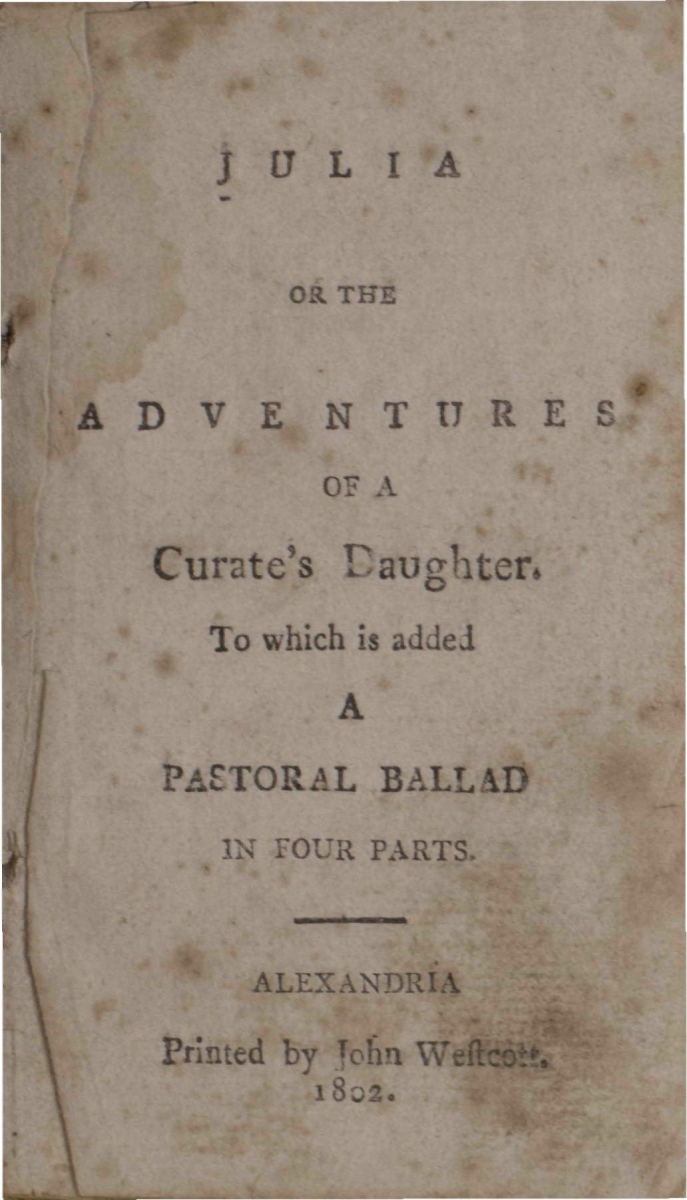 Many good people besides the immortal Shakespeare have been born upon the Avon, and one of them was the Curate of the Parish of Elmwood. Of a family of nine people, parents and children, only he and his daughter Julia remained.

The old parson could do many things besides eating his pudding, drinking his October, and collecting his tythes [sic], those important qualifications which have been from time immemorial annexed to the office of a country curate.

We learn that the Parson “most dearly loved his daughter Julia.”

And well did she deserve his love. Sweet maid! If ever I forget thee, may my fancy lose her flights, and my pen its movements! If ever I forget the majestic elegance of thy form, or the liquid blue swimming in thy eye or the half rose half lily colours glowing in thy cheeks, like the streaks of the west in a July evening—Oh, if I remember not the lovely confusion o’er all thy features, when I first beheld thee in the arms of the ravisher—may I cease to dream of thee—If I do not, Julia! may’st thou never think of me!

The author describes the mansion in which this small family resided as “neither stately nor proud…” We are introduced to the idyllic life that its inhabitants lived in a rural setting. But fate intervenes and disrupts the Parson’s tranquility. The Vicar of a neighboring parish dies.

Now the moment our Curate was informed of this, it roused one of his worst passions; he had now but one wish to be gratified in this world, and this was, to have the neighbouring Vicarage in his possession….he wanted to have it in his power to leave something to his Julia after his death, and now that he was so very old, and so very gouty, what a comfortable thing it would be to have a Curate under him…

The nobleman, who had it in his power to award the living by naming the replacement for the dead vicar, lived in London. Convinced that the only effective way to secure the living was by personal application to his Lordship but too frail to make the trip, the Curate determines to send Julia as his emissary. Soon she and a local rube to protect her set out for London.

He [the rube] was never famous but for two things, viz. for whistling after his team the loudest and most musical notes of any in the whole village, and for knitting stockings—this was all the reputation he had in the world, and now he was going to set out for London, where he had never been, in high expectation of seeing fine things and fine folks, but without any idea of receiving treatment different from what he met with in the parish of Elmwood.

The author marvels at the naivety of the ill-equipped twosome.

A village virgin attended by a village boar—both equally accustomed to travelling, and the bustle of an English turnpike road—both equally skilled in the knowledge of men, and of their characters, are setting out for London! for London, I say, in quest of a Curacy! The thing was worthy of a village Curate. The descent of Eneas [sic] into hell was in comparison to this, walking upon carpets.

It will come as no surprise to learn that not long after climbing into the coach for London, a series of disasters begins to beset the travelers. At every turn Julia is victimized by unscrupulous people who steal from her, hold her hostage, make unwelcome advances toward her, and many more acts of assaults on her virtue and safety. How she and the rube survive the treachery and threats and finally reach the nobleman only to learn he has already dispensed the curacy to someone other than Julia’s father is a long and exhausting tale. However, the fates intervene, and the outcome rewards the maiden’s virtue and gratifies her father.

The Witty and Entertaining Exploits of George Buchanan, Commonly Called the King's Fool (1816)

The citation identifies the genre of this imprint as facetiae which Merriam-Webster defines as “witty or humorous writings or sayings.” One historical George Buchanan was a Scottish scholar of the 16th century whose Protestant ideology included a resistance to royal usurpation which may have led to the deposition of King James VII. It is possible that the Buchanan of this comical imprint was knowingly named in his honor because he plays the jester, and in doing so he undermines the dignity and prerogative of the king, in this account James VI.

Mr. George Buchanan was a Scotsman born, and though of mean parentage made great progress in learning. As for his understanding and ready wit, he exceeded all men then alive in that age, that ever proposed questions to him. He was servant or teacher to king James VI as his private counsellor, but publicly he acted as his fool.

The accounts of Buchanan’s comical exploits are somewhat ribald and mildly scatological. In one instance he defecates under a hat a young swain has used to mark and protect a flower he wished to present to a young lady. When the swain brings his intended to see the flower, he grandly removes the hat only to reveal the waste at which the lady recoils and ardently rejects the suitor. The subsequent attempt by the swain to avenge himself also results in an encounter with feces. At another time, Buchanan is said to have…

…seated himself hard by the Queen’s seat [in Parliament], all being silent, he rose up very quickly, and lifted one of his legs and then gave a loud fart, which set the whole house a laughing; whereat the queen was greatly offended, and crying to take the rogue and hang him; to which George replied, a fine parliamenter [sic] indeed, to hang a man for a sinless infirmity, and that is a fart.

Subsequently, the King delivers Buchanan to his Queen so that she might punish him. She determines that he must be stoned to death by women in order to avenge the greatest woman of the realm. When Buchanan confronts the armed and vengeful group of women he makes a short speech.

Here’s a female band with bags of stones,

To kill a man for rumple groans.

Could I convert my farts to rifts?

Since I the first for farting die,

Close up the place from which they fly;

To commit my crime I think ye’ll scarce,

If once you do cork up your arse.

And now since women stones do carry,

Men need not in the world to tarry.

Judge if such women be chaste complete,

With forty stones between their feet,

But since it’s so ye will come on,

When he ended with these words, the greatest whore should throw the first stone, every one put it to another to cast the first stone; but knowing they would attain the character of a whore for so doing, they all refused till the dying hour was past, and then he took a protest against them, and by that means saved his life. After this he was admitted in the Queen’s favour and presence, attending the court as formerly.

The jester’s forays are dependent on misdirection, innuendo, and an artful play on words.

At this time it happened that a malignant party in Scotland sent up a great spokesman to the King and parliament for seducing the church: George hearing of his coming, went away and met him on the bridge, and the salutation that he gave him was the cutting off his head and throwing it over the bridge, then ran to the king with all his might, falling down before him, pleading most heartily for a pardon, or he was a dead man. The king most seriously asked him what he had done now; to which he answered, he had only thrown the Scotch Bishop’s hat over the bridge, which made the king laugh to hear him ask pardon for such a small fault; but he had no sooner got the pardon sealed by the King’s hand, than he said, but his head was in it. Geordy, Geordy, says the king, thou wilt never give over till thou art hanged.

We will conclude with one more anecdote which is short but hardly sweet. The researcher may wish to read the whole imprint which is entertaining and may be sufficient to induce laughter.

George one day easing himself at the corner of a hedge, was espied by an English squire, who began to mock him, why did he not keckle [cackle] like the hens? but George, whose wit was always ready, told him he was afraid to keckle, least he should come to snatch up the eggs: which rebuff made the squire walk off as mute as a fish.