‘The Most Excitable Senator’: Highlights from Afro-Americana Imprints, 1535-1922

The February release of Afro-Americana Imprints, 1535-1922: From the Library Company of Philadelphia includes examples of the use of pseudoscience to justify racism, a defense of Senator Sumner’s anti-slavery “Crime Against Kansas” speech, and more. 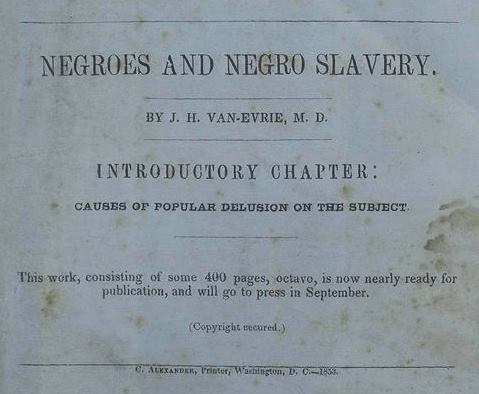 John H. Van Evrie (1814-1896) authored several books defending slavery and racism, edited the white supremacist newspaper Weekly Day Book, and owned a publishing company. He was referred to as the first professional racist in American history. Van Evrie often employed the pseudoscience of race biology to defend his beliefs, in this case his opposition to miscegenation.

Thus an American Secretary of State will talk learnedly about some races who, amalgamating with others, beget a mongrel breed, utterly good for nothing, while others with an aptitude for amalgamation, beget a more vigorous and progressive race than either of the originals. How near a truth, and yet what an immense distance from it! Had the orator of the Colonization Society said that amalgamation with separate races of men, as ourselves and the Negro, is followed by a mongrel breed, however superior mentally to the Negro, yet vastly inferior to the white, and as certain to perish as the mule, or any other hybrid generation: but that amalgamation with the Irishman or German, or any other family of our own species or race, would be followed by a more vigorous stock than either of the originals, he would have declared an eternal truth; but we may also say, that had he know this truth, he would not have been the orator of the Colonization Society… 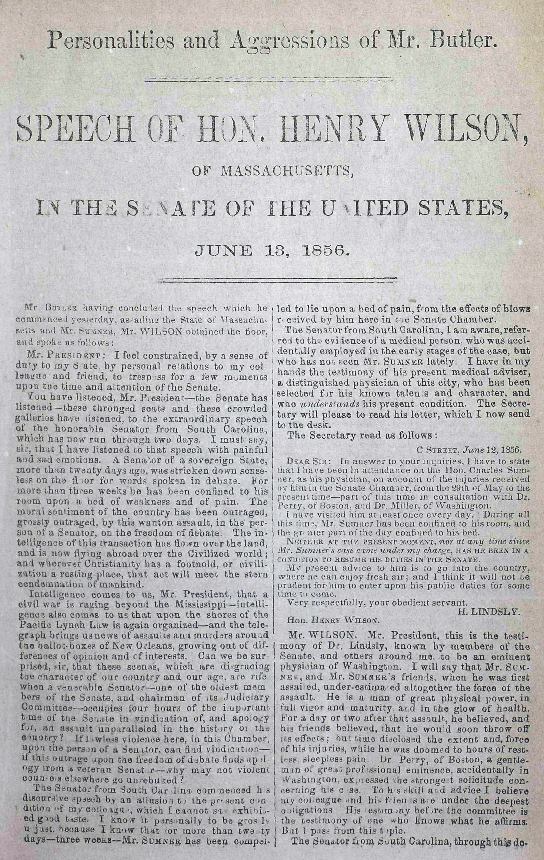 Personalities and Aggressions of Mr. Butler (1856)

I feel constrained, by a sense of duty to my State and by personal relations to my colleague and friend, to trespass for a few moments upon the time and attention of the Senate.

When Wilson turned his attention to Senator Butler this exchange ensued:

Mr. WILSON. The Senator from South Carolina, through this debate, has taken occasion to apply to Mr. SUMNER, to his speech, to all that concerns him, all the epithets—

Mr. BUTLER. I used criticism, but not epithets.

Mr. WILSON. Well, sir, I accept the Senator’s word, and I say “criticism.” But I say, in his criticism, he used every word that I can conceive a fertile imagination could invent, or a malignant passion suggest.

The Senator told us that South Carolina, which furnished one fifteenth as many men as Massachusetts, in the Revolution, “shed hogsheads of blood where Massachusetts shed gallons.” That is one of the extravagances of the Senator—one of his loose expressions, absurd and ridiculous to others—one of that class of expressions which justify Mr. Sumner in saying that “he cannot ope [sic open] his mouth, but out there flies a blunder.” This is one of those characteristics of the Senator which naturally arrested the attention of a speaker like Mr. Sumner, accustomed to think accurately, to speak accurately, to write accurately, and to be accurate in all his statements. I say that such expressions as those in which the Senator from South Carolina has indulged in reference to this matter are of the class in which he too often indulges…

Before dissecting the substance of Butler’s speech, Wilson belittles the speaking style of “the most excitable Senator:”

…the Senator from South Carolina addressed the Senate, then, as now, in a long speech, running through two days….you must read that speech, read it all through, look at it carefully, consider its words and its phrases, to understand the tone he evinced towards Mr. Sumner and towards Massachusetts and the Northern men who stood with him. I need not say that there were bitter words, taunting words in the speech. I was not here to listen to it, but we all know…that the Senator from South Carolina is often more offensive in the manner which he exhibits, and he throws more of contempt and more of ridicule in that manner than he can put in his words, and he is not entirely destitute of the ability of using words in that connection.

In this attempt to rationalize “that many races of men are incapable of civilization,” this paper, read before the Anthropological Society of America, makes similar arguments to those of John Van Evrie seen above.

The intellectual and moral character of Races is as permanent and unchangeable as their physical type. That is, we can no more tempt, or educate, or elevate a Race, above its natural character and condition, than we can alter its typical complexion. Gymnastic exercises will do as much to change the anatomy and physiology of a Race as education will to elevate it in the moral scale. Civilization and barbarism are therefore natural conditions of Races. No Race which is now civilized was ever barbarous. And no Race which is now barbarous was ever civilized. We challenge any one to produce an instance on the face of the globe, in the whole historic period of five thousand years, which is an exception to this proposition.

Ever since the sixteenth century Europe has been trying to civilize the wild tribes of the East, without the least beneficial result. Look at the failure of the English to civilize the natives of India. It is long since the Dutch subjugated the natives of Java, but not the slightest progress has been made towards their civilization. What has been the result of the Spanish rule in Mexico and the South and Central American States? Not to elevate the natives in the least; but only to degrade and destroy the Spanish blood, by admixture with that of the aborigines and negroes. The attempt to practice “universal human brotherhood” in all these countries has simply destroyed the Caucassian [sic] race there, without the least improvement of the native race.

This month’s release also includes many interesting broadsides such as this advertisement for two nights of entertainment at Philadelphia’s Temperance Hall. The “galaxy of talent” includes J. Clark Well, “the Greatest Ethiopian Comedian of the Age,” and Master Bobby Wells, “the most Eccentric Ethiopian and Yankee Comedian and the Best Jig Dancer of the Country of his Age.” Guests are reminded of hall rules:

All stamping, whistling, or other disorderly conduct strictly forbidden in the Hall. Efficient Officers will be on hand to maintain perfect order.