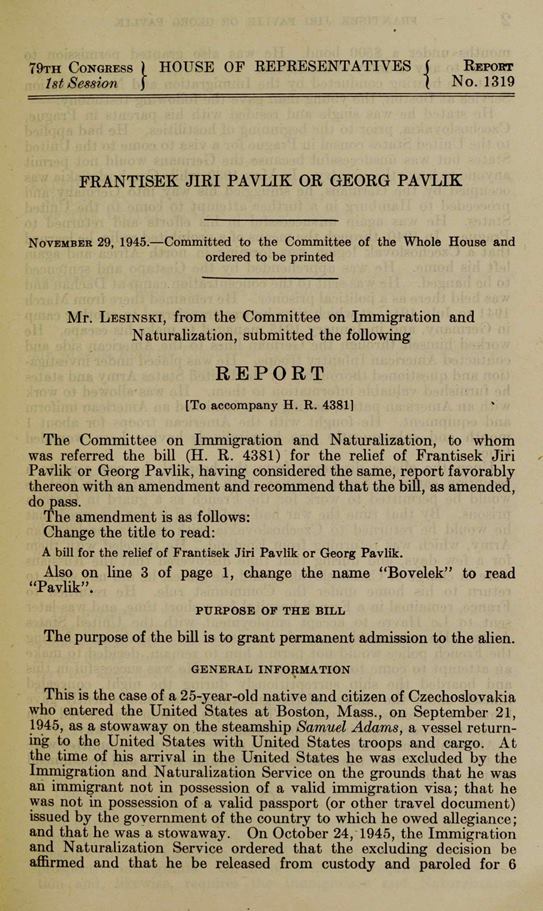 Representative Lesinski continues, explaining that at the end of the war in Europe Pavlik learned he would be returned from France to Soviet-controlled Czechoslovakia and that Pavlik “did not want to return to his home under the Communist rule.” Unable to work because of his wounds and fearing the French police would not permit him to remain, he surreptitiously boarded the steamship Samuel Adams and eventually arrived in Boston.

As incredible as was Pavlik’s story, he was but one of thousands seeking new lives following World War II. While Pavlik was still imprisoned at Dachau, in June 1944, the President Franklin Roosevelt delivered a message to Congress, saying in part:

Congress has repeatedly manifested its deep concern with the pitiful plight of the persecuted minorities in Europe whose lives are each day being offered in sacrifice on the altar of Nazi tyranny.

This Nation is appalled by the systematic persecution of helpless minority groups by the Nazis. To us the unprovoked murder of innocent people simply because of race, religion, or political creed is the blackest of all possible crimes. Since the Nazis began this campaign many of our citizens in all walks of life and of all political and religious persuasions have expressed our feeling of repulsion and our anger. It is a matter with respect to which there is and can be no division of opinion amongst us. 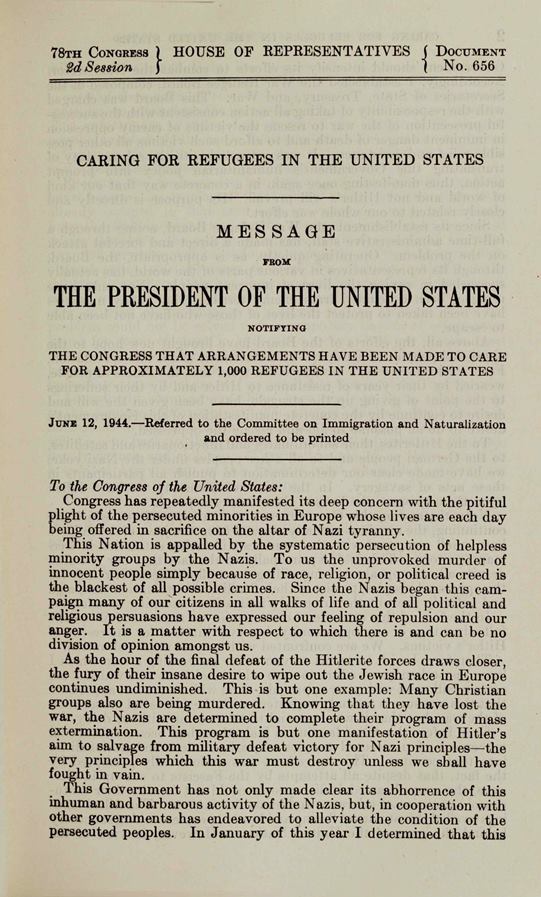 This Government has not only made clear its abhorrence of this inhuman and barbarous activity of the Nazis, but in cooperation with other governments has endeavored to alleviate the condition of the persecuted peoples. In January of this year I determined that this Government should intensify its efforts to combat the Nazi terror. Accordingly, I established the War Refugee Board, composed of the Secretaries of State, Treasury, and War. This Board was charged with the responsibility of taking all action consistent with the successful prosecution of the war to rescue the victims of enemy oppression in imminent danger of death and to afford such victims all other possible relief and assistance. It was entrusted with the solemn duty of translating this Government’s humanitarian policy into prompt action, thus manifesting once again in a concrete way that our kind of world and not Hitler’s will prevail.

The president concludes his letter explaining that facilities in Europe for the care of refugees have become overwhelmed and that “arrangements have been made to bring immediately to this country approximately 1,000 refugees who have fled from their homelands to southern Italy.”

In 1948 Congress passed the Displaced Persons Act, creating the Displaced Persons Commission and codifying a system of relief for the ongoing humanitarian crisis in post-war Europe. On May 4, 1948, the Committee on the Judiciary reported on a bill similar to the version eventually enacted on June 25th and in which the committee describes some of the benefits of allowing certain displaced persons entry into the United States:

The priorities provided for in subsection (a) of this section are based on economic and scientific needs of this country expressed in numerous bills pending in Congress…as well as in various communications which were submitted to the committee.

It appears that the following types of skilled labor are urgently needed in various parts of the United States: farm laborers, particularly dairy and dairy-products workers, vegetable and sugar-beet workers, construction workers, such as carpenters, bricklayers, plasterers, masons, and mechanics; household workers, such as domestics, cooks, and bakers (for the hotel industry); hospital attendants, nurses, etc. 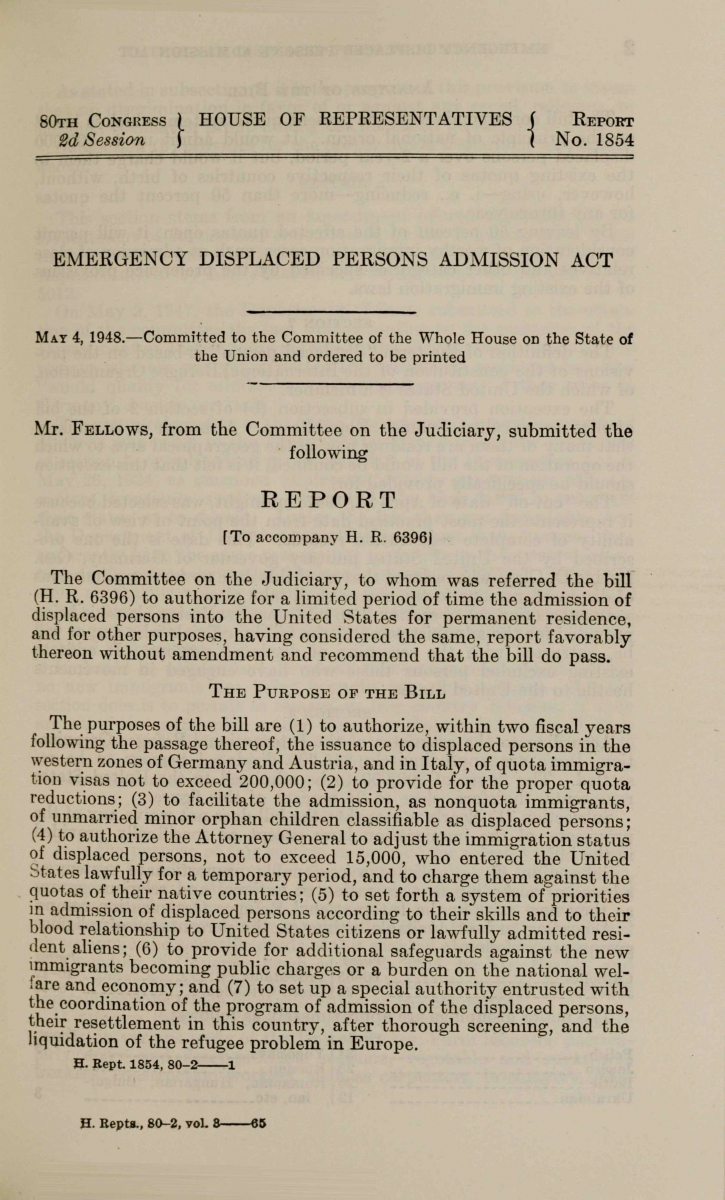 The committee also juxtaposes the two Soviet and U.S. positions on the issue of forced repatriation:

There is a sharp divergence of viewpoint between the United States Government and the Soviet Government and its satellites as to what course should be pursued with regard to forced repatriation The Soviet viewpoint has been vigorously presented before every possible forum—the control councils in Germany and Austria, the General Assembly of the United Nations, the Council of Foreign Ministers, etc.

The viewpoint of the U.S.S.R. and its satellites is that those persons born in areas now subject to the Soviet governmental authority or the Communist-dominated satellite countries are under obligation to return to such territory. They demand that the United States, British, and French armies of occupation forcibly repatriate the displaced persons.

The American viewpoint is that it is against American tradition to compel these persons to return against their will to areas under governments whose political and economic systems they are unwilling to accept.

Attached to the end of the report by the House Judiciary Committee are the views of New York Congressman Emanuel Celler who had supported a competing bill that would have allowed more people relief. He expresses a sentiment—the value of compromise—that often goes unappreciated:

The temper of the Congress is such as to convince those of us who support the wholly humanitarian and practical provisions of the Stratton bill that we cannot secure its passage. However, it cannot be gainsaid that a partial solution to the displaced persons problem is far better than none. Since there are approximately 835,000 displaced persons to resettle, 200,000 represents about 24 percent. H.R. 6396 will not permit the closing of the DP camps so as to relieve us completely from the financial responsibility we carry in that regard; nor will it give more than a limited number of these homeless refugees an opportunity to regain a lost security or to rehabilitate themselves into useful, productive individuals. But, as I stated above, H.R. 6396 does offer a partial solution; and in view of the impossibility of gaining more liberal provisions, I have joined the other members of the committee in reporting it favorably.

Researchers interested in the history of 20th-century immigration policy will want to read a U.S. Congressional Serial Set report from the following Congress titled “Expellees and Refugees of German Ethnic Origin.” 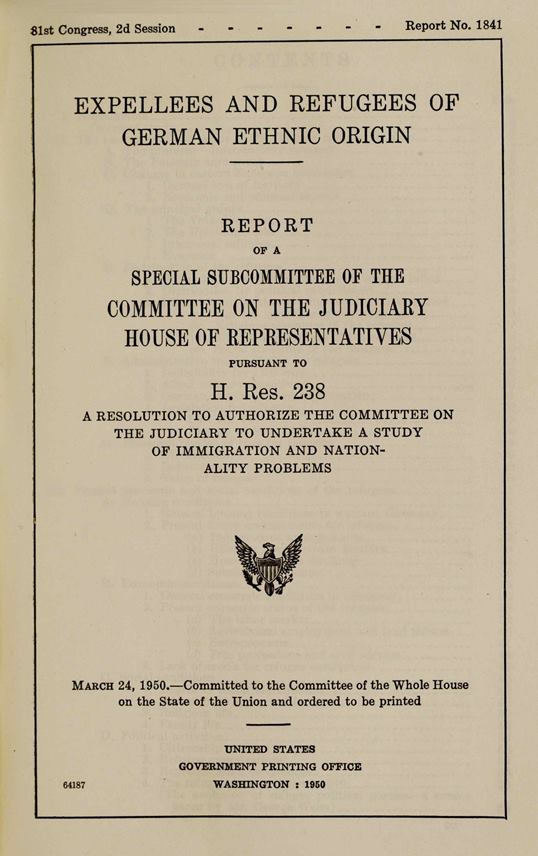 4. Expellees and refugees of German ethnic origin. Report of a special subcommittee of the Committee on the Judiciary, House of Representatives, pursuant to H. Res. 238, a resolution to authorize the Committee on the Judiciary to undertake a study of immigration and nationality problems. March 24, 1950. Serial Set Vol. No. 11379, Session Vol. No.2, 81st Congress, 2nd Session, H.Rpt. 1841.