‘The Prospect of Anarchy and Dissolution Is Upon Us’: Highlights from Afro-Americana Imprints, 1535-1922

The May release of Afro-Americana Imprints, 1535-1922: From the Library Company of Philadelphia contains a 1767 address against slavery by an American physician, diplomat and politician; a memoir of travels through Africa by the self-described discoverer of the source of the Blue Nile; and Civil War-era campaign literature by the author of “Negro-mania.” 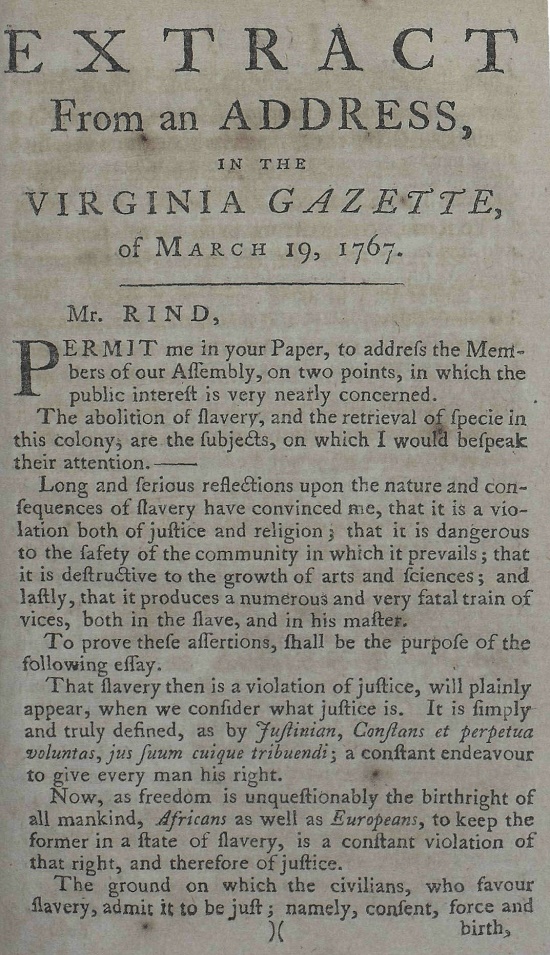 Arthur Lee (1740-1792) served as an American diplomat to Britain and France during the Revolutionary War. Prior to the war he was educated in both law and medicine. He practiced the former in London and upon returning to Virginia served as a delegate to the Continental Congress. In this early work, Lee speaks against slavery, arguing:

Permit me in your Paper, to address the Members of our Assembly, on two points, in which the public interest is very nearly concerned.

The abolition of slavery, and the retrieval of a specie in this colony, are the subjects, on which I would bespeak their attention.

Long and serious reflections upon the nature and consequences of slavery have convinced me, that it is a violation both of justice and religion; that it is dangerous to the safety of the community in which it prevails; that it is destructive to the growth of arts and sciences; and lastly, that it produces a numerous and very fatal train of vices, both in the slave, and in his master.

To prove these assertions, shall be the purpose of the following essay.

That slavery then is a violation of justice, will plainly appear, when we consider what justice is. It is simply and truly defined, as by Justinian, Constans et perpetua voluntas, jus suum cuique tribuendi; a constant endeavor to give every man his right.

Now, as freedom is unquestionably the birthright of all mankind, Africans as well as Europeans, to keep the former in a state of slavery, is a constant violation of that right, and therefore of justice.

Lee goes on to rebut justifications for slavery he labels consent, force, and birth. 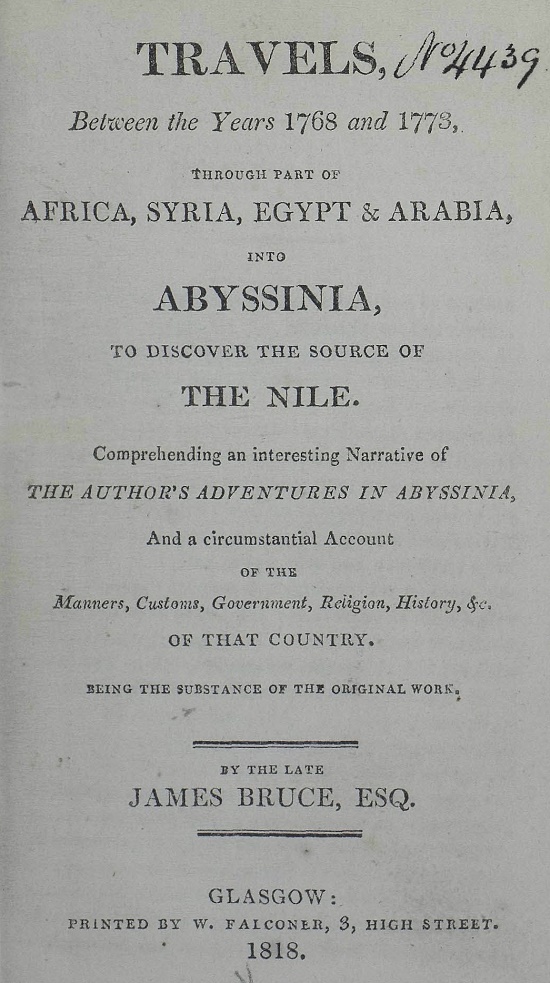 James Bruce (1730-1794) was born in Scotland, studied the law, and married the daughter of a wine importer and merchant. Working in the wine trade led Bruce to travel to Portugal and Spain and later to North Africa. In 1768 Bruce arrived at Alexandria and sought to find the source of the Blue Nile. The introduction to this edition, which was published a quarter century after Bruce’s death, includes a description of his reaction to critics of an earlier printing.

Notwithstanding a certain degree of arrogance, which seemed to enter into his character, he carefully attended to every criticism on his work that appeared, and was preparing to make such alterations and corrections, of the propriety of which he was convinced, with the intention of publishing a new edition of his work in octavo, under his own immediate inspection. On this subject he consulted the critical taste of the late Dr. Blair, who, with friendly severity, recommend various alterations, which Mr. Bruce, respectfully bowing to his judgment, consented to execute.

Recounting the idyllic source of the Blue Nile, Bruce writes:

Nothing can be more beautiful than this spot: the small rising hills about us were all thick covered with verdure, especially with clover, the largest and finest I ever saw; the tops of the heights crowned with trees of a prodigious size; the stream, at the banks of which we were sitting, was limpid and pure as the finest crystal; the ford, covered thick with a bushy tree, that seemed to affect to grow to no height, but thick with foliage and young branches, rather to court the surface of the water, whilst it bore, in prodigious quantities, a beautiful yellow flower, not unlike a single wild rose of that colour, but without thorns.

Unionists Versus Traitors: The Political Parties of Philadelphia; or the Nominees that Ought to be Elected in 1861 (1861)

By John Campbell, a Douglas Democrat 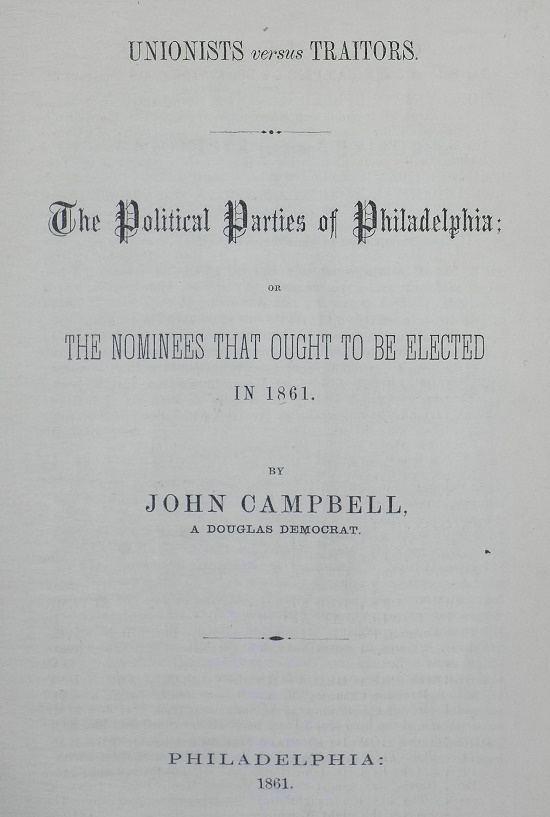 In 1851 John Campbell’s work “Negro-mania: being an examination of the falsely assumed equality of the various races of men” was published. Ten years later, Campbell penned this piece of campaign literature on the political parties of Philadelphia subtitled, “The nominees that ought to be elected in 1861.”

My motives in writing the following pages are—a hatred of the men, cliques and parties who have involved the Republic in its present calamities and dangers, and a desire to fulfill to the letter my oaths of allegiance to the U.S. My objects are—to aid to the best of my ability, the effort of the Government to suppress treason, and to prevent, if possible, the elevation to office of any man tinctured with or suspected of secession proclivities. I propose, therefore, to issue this pamphlet upon the crisis. It will be for those who read it to act upon its suggestion if they appear to them true – but if false, to reject them.

One of Campbell’s suggestions is to examine the role of Great Britain in the looming national conflict.

I have shown to you England’s power, or rather the power of her ruling class. Let me now advert to her policy—“divide et impera,” divide and conquer is her motto. Her emissaries from Exeter hall have been sowing broadcast the seeds of disaffection around and among us. Ever since the days of her West India Emancipation Act, she has set herself up as a model of national virtue and sanctity. In the House of Parliament, and out of them, this Uriah Heap sanctimoniousness has been paraded before the world. Her missionaries here have held up their hands in hypocritical horror at slavery. Her George Thomsons have been most eloquent in its denunciation. Her aristocrats have feted and petted our most notorious Abolitionists. Her policy always has been to enter the wedge of disunion. This policy culminated in 1860. Southern traitors raised aloft their pirate flag. Then it was that the Norman Aristocracy of England cast aside the thin veil of hypocrisy. What care they for the slave. It was and is enough for them that the prospect of anarchy and dissolution is upon us. Their sympathies are all now on the side of the Southern traitors, and for two reasons: First, a hatred of our republican institutions, which gave an asylum to her own oppressed people, fleeing from bondage. Second, because she sees in the acts of Davis & Co. an approximation to her own monarchical system. England introduced among us, first of all, slavery, and then she preaches up her crusade of abolitionism, not to benefit us, but rather to do us all the mischief she is able.