The June release of The American Civil War Collection, 1860-1922: From the American Antiquarian Society includes an 1862 speech from the House floor in favor of the “confiscation of rebel property,” a history of the war by a Morgan's Raid commander, and a speech honoring “the remarkable career and character of Edward Augustus Wild,” a local war hero from Brookline, Massachusetts.

Speech of Hon. William Kellogg, of Illinois, delivered in the House of Representatives, May 24, 1862 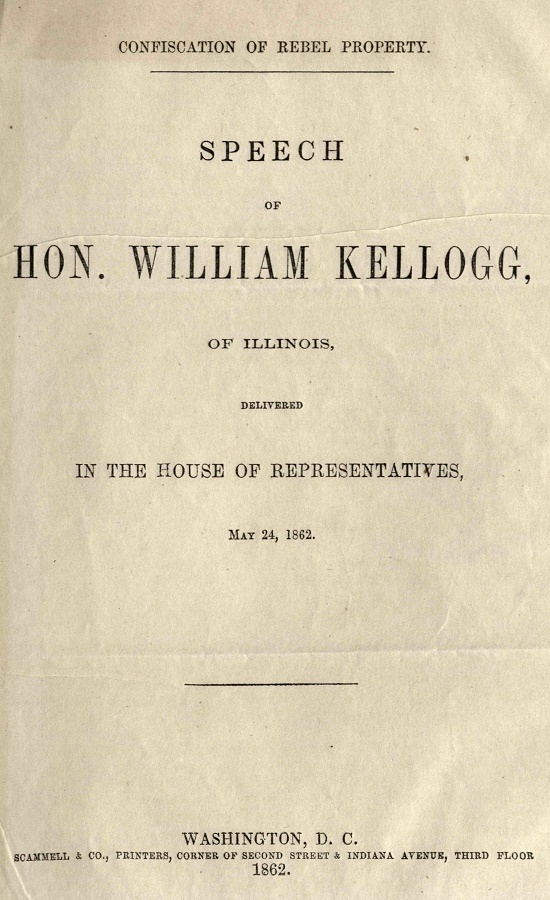 William Kellogg (1814-1872) served in both the Illinois and U.S. House of Representatives. After refusing an appointment to be Minister to Guatemala, Kellogg accepted the position of Chief Justice of the Territorial Supreme Court of the Nebraska Territory.

While serving in the U.S House, Kellogg was vocal in debates related to the onset of the war. In 1860, he was appointed to the Committee of Thirty-Three which was charged with proposing a path to avert war. The next year Kellogg introduced a substitute to the proposal of the committee. His proposal allowed slavery to continue in limited states and territories. He was criticized for this position and in the following year argued in favor of war power and the power of confiscation by the state.

In this speech on the “Confiscation of Rebel Property, delivered from the House floor, Kellogg said:

To restore the Government in its functions, unity, and power, and to preserve the Constitution intact, should be, and doubtless is, the desire and object of all true men. In considering the various propositions before the House, this object should be kept constantly in view; for though the rebellion be crushed, yet if we have infracted the Constitution and dissolved its great bonds, we have indeed accomplished little more than the rebels themselves designed—the destruction of the Constitution.

From the reflection I have been able to give this subject, I am satisfied that the passage by Congress of a judicious confiscation bill will be in consonance with the spirit of the Constitution, and materially tend to the restoration of the Government.

Kellogg asserts the Constitution “declares in express terms the war power” and “the Government cannot exist without it.” Maintaining the power of the government to protect itself is equivalent to war powers, he contends:

If our Government does not possess that power today, it is a failure, a rope of sand; it is a useless thing that we have reverenced for many years. If, sir, we as a nation, have not the power of self-preservation, it is time that the people of this Government, with its great prosperity and its great inherent elements of power, should bestir themselves, and fix it as a cardinal principle of the Constitution. 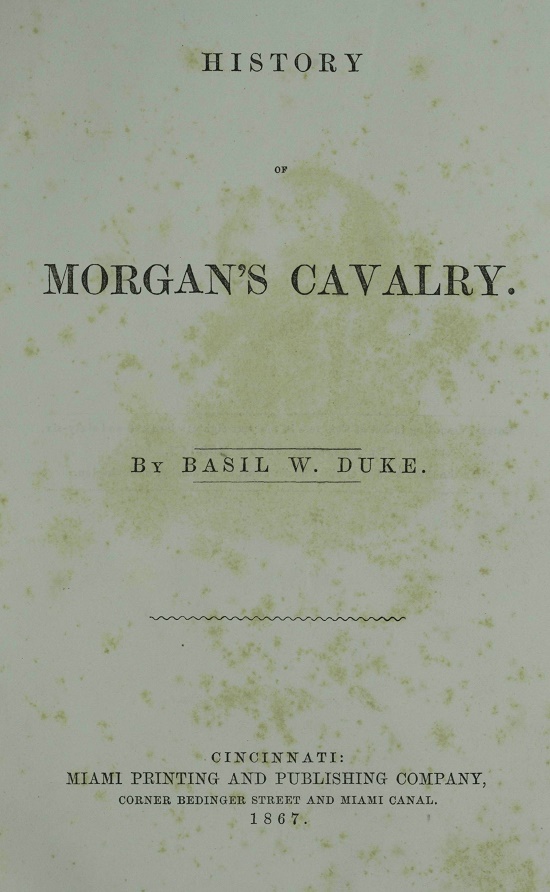 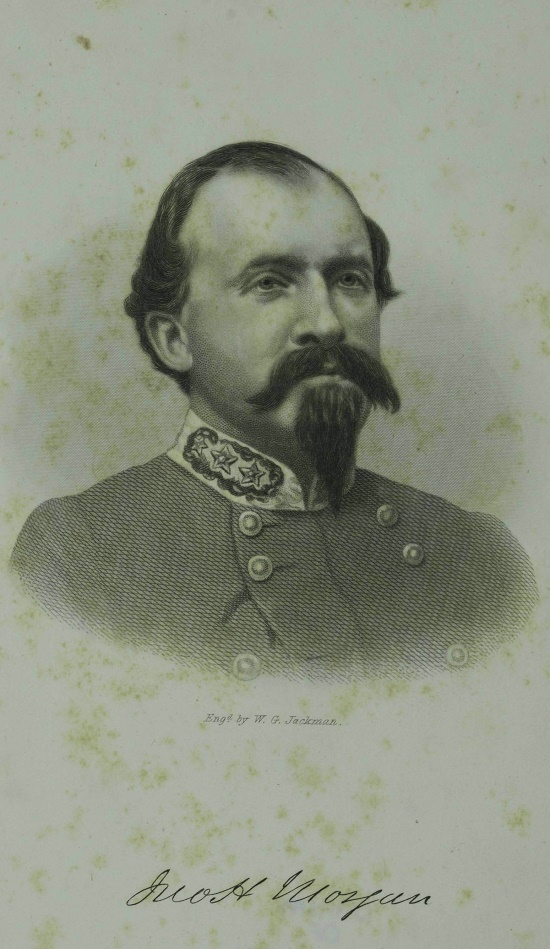 After describing the audacious 46-day raid, Duke recounts their subsequent retreat including this anecdote of the cavalry’s comradeship and ingenuity.

After a good deal of preliminary reconnoitering and some skirmishes with the men of the escort, the enemy’s cavalry dashed into the town, eight abreast, driving out General Morgan and several officers, who happened to be collected at McMinville upon sick leave, or on special duty of some sort. Among them were Colonel Cluke, Lieutenant Colonel Martin, and Major McCann. Exchanging a few shots with the cavalry, the party retreated upon the Sparta road—McCann’s horse was shot in the melee and fell, bringing him to the ground. He sprang to his feet and standing in front of the charging column, shouted “You have got the old chief at last,” seeking to produce the impression that he was General Morgan and so favor the latter’s escape. He was ridden over, severely sabred, and captured; but having been placed in an old stable, and allowed a canteen of apple brandy, he got the guard drunk and dug out under the logs, during the night, effecting his escape. 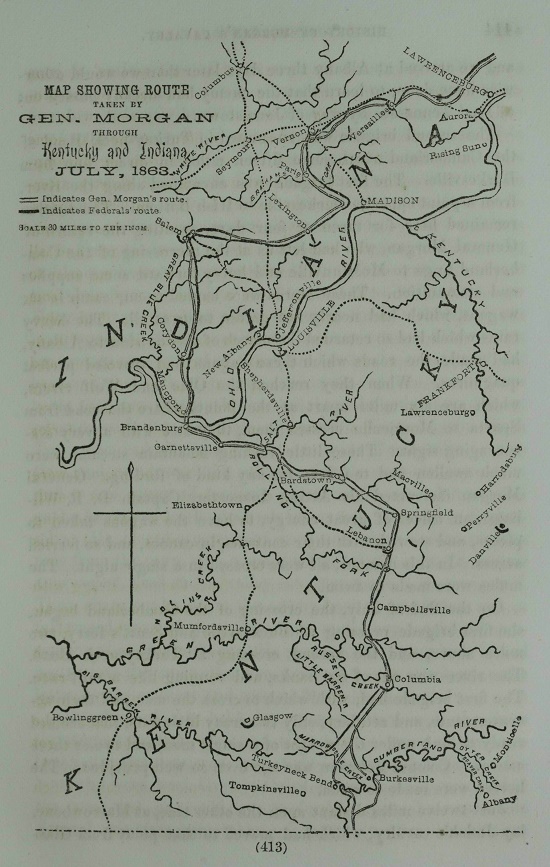 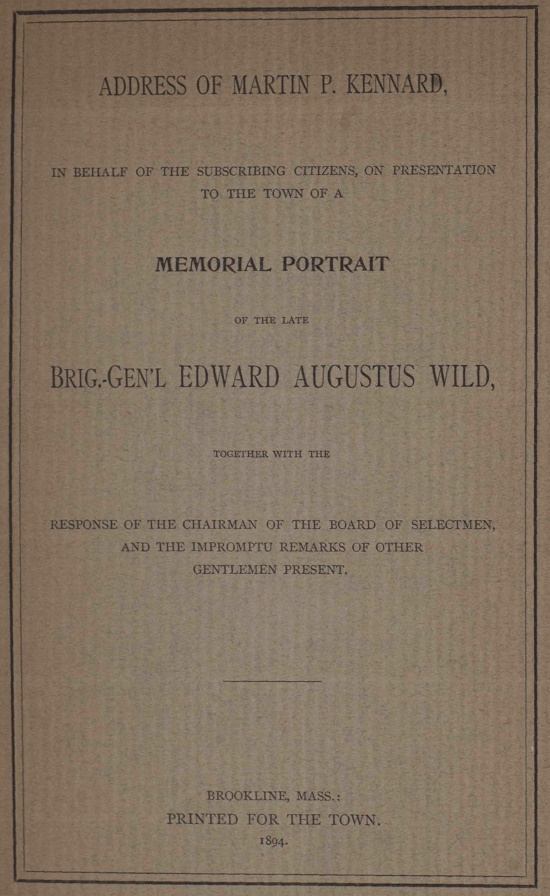 Introducing the 1894 printing of his address to the citizens of Brookline, Massachusetts, in which he presented a memorial portrait of the late Brigadier General Edward Augustus Wild, Martin P. Kennard writes:

The Great Civil War of 1861-5 in the United States will ever hold a conspicuous place in the world’s history, for its magnitude, and as one inevitable in the moral advancement and civil progress of its time.

This inadequate portrayal of the remarkable career and character of Edward Augustus Wild, a cherished son of Brookline, as set forth in the following pages, with the presentation to the town of his memorial portrait, May 24th, 1893, was not prompted by a too zealous partisanship or from the partiality of social relations, but because of his unalloyed patriotism and his signal service in that contention, in the cause of the Union, and when under its strain the administration of Abraham Lincoln called for the aid of loyal men. 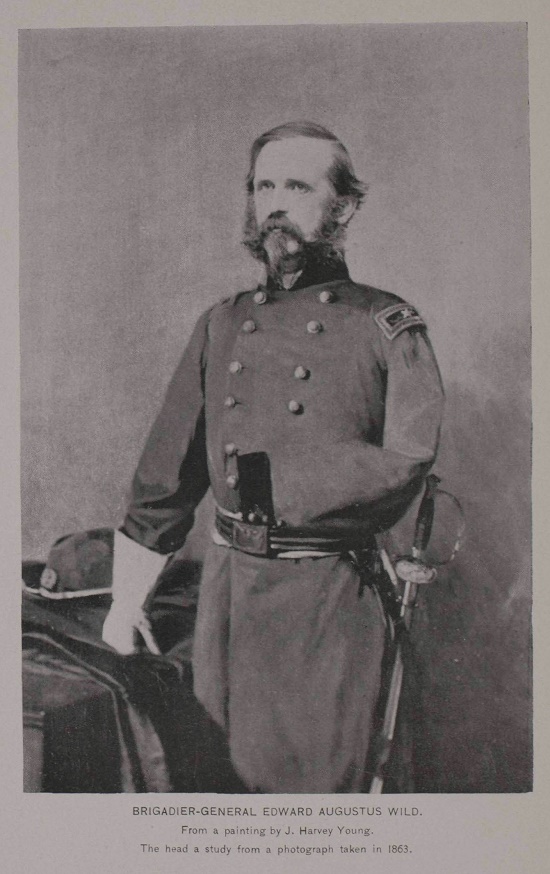 Before expounding on Wild’s accomplishments, Kennard describes why he felt it was necessary to even review the life of the town’s native son.

Ordinarily, it would be well-nigh superfluous for me, here in this presence, or indeed in Brookline, to dilate upon the achievements of General Wild, or otherwise than succinctly allude to his citizenship and interesting military record.

But, Mr. Chairman, in the swift flight of time a generation has passed since the advent of that grievous epoch, when the guns of a misguided and rebellious State were trained on Fort Sumter, and a slave-holding oligarchy threw down the gauntlet of war against our union of States and the Presidency of Abraham Lincoln; and, therefore, a brief and incidental mention of General Wild’s extraordinary career, marked especially by his early enlistment in the defence of the Union, and his uncompromising and patriotic devotion thereto until its establishment was assured, may be pardoned on this occasion.

For more information about The American Civil War Collection, 1860-1922, or to request pricing for your institution, please contact Readex Marketing.