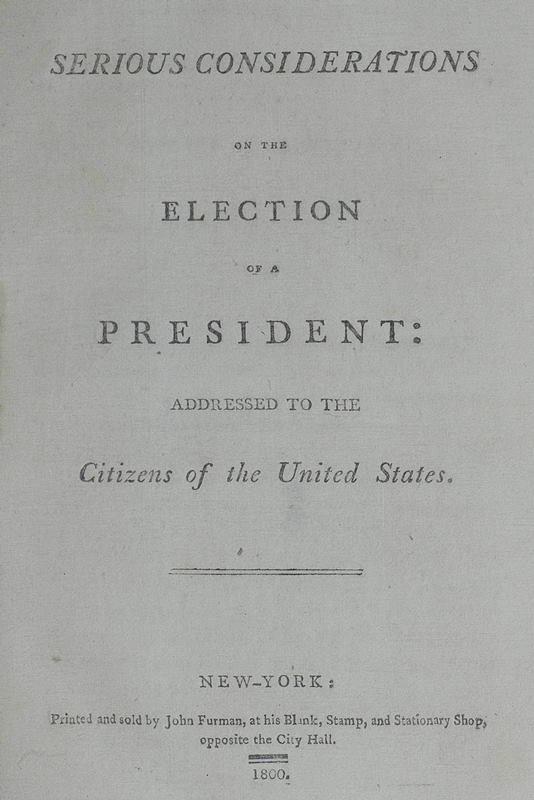 “I advance it therefore as a suspicion only, that the blacks, whether originally a distinct race, or made distinct by time and circumstances, are inferior to the whites in the endowments both of body and mind. It is not against experience to suppose, that different species of the same genus, or varieties of the same species, may possess different qualifications.”

To which Linn responds, writing:

Can any man now doubt of Mr. Jefferson’s real opinion, and of that opinion being directly opposite to divine revelation? In his conclusion he betrays, like a true infidel, an inconsistency with himself. Having labored to point out physical and moral distinctions between the Whites and the Blacks, he advances it at last “as a suspicion only,” that the latter were inferior to the former; having expressly asserted, that the distinctions mentioned, “prove a difference of race,” now he modestly conveys the doubt, “whether originally a distinct race, or made distinct by time and circumstances.” Would a man who believes in a divine revelation even hint a suspicion of this kind?

You have degraded the blacks from the rank which God hath given them in the scale of being! You have advanced the strongest argument for their state of slavery! You have insulted human nature! You have contemned the word of truth and the mean of salvation! And, whether you will excuse us or not, we exclude you, in your present belief, from any department among Christians! 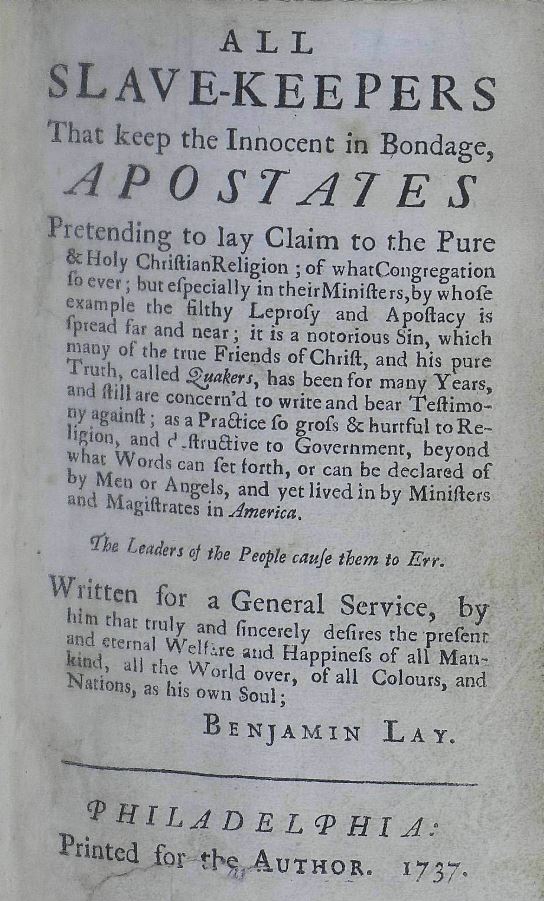 Benjamin Lay (1677-1759) was born in England, moved to Barbados, and finally settled in Pennsylvania. He was a Quaker, abolitionist, and prodigious writer of over 200 pamphlets. Lay’s commitment to abolitionism included refusing to eat or wear anything produced with slave labor. He also drew attention to the conditions of slaves through many public demonstrations. His writing is perhaps most remarkable for his frequent diatribes.

Having just returned to his subject from a digression about his wife offering food to slaves en route to America via Barbados he deviates quickly again, this time to compare the slave owners of the Caribbean and their guests to the rum and molasses they produce:

…here and there a favorite Slave, of a hundred or thousand, may be, kept for their Glory and Pride to wait on them, amongst their proud, lazy, dainty, tyrannical, gluttonous, drunken, debauched Visitors, the Scum of the infernal Pit, a little worse than the same that comes off their Sugar when it is boiling which is composed of Grease, Dirt, Dung, and other Filthiness, as, it may be Limbs, Bowels and Excrements of the poor Slaves, and Beasts, and other Matters, but this I say serves exceeding well to make Rum of, and Molasses, for that is the Use it is put to, with other Ingredients pretty much like it; and these People in the Islands may laugh at us for being ridiculously infatuated, to send away our excellent good Provisions, and other good Things, to purchase such filthy stuff, which tends to the Corruption of Mankind, and maybe send us some of the worst of their Slaves, when they can not rule them themselves, along with their Rum, to complete the Tragedy, that is to say, to destroy the People in Pennsylvania, and to ruin the Country. Dear Friends, or any of my Fellow Creatures, I must confess I am apt to digress, but when such dangerous Filthiness comes in my Way, I think it my Duty to make it appear if possible to others; for it is so to me, exceeding sinful above Measure, I will assure you, more than what I can speak or write abundantly… 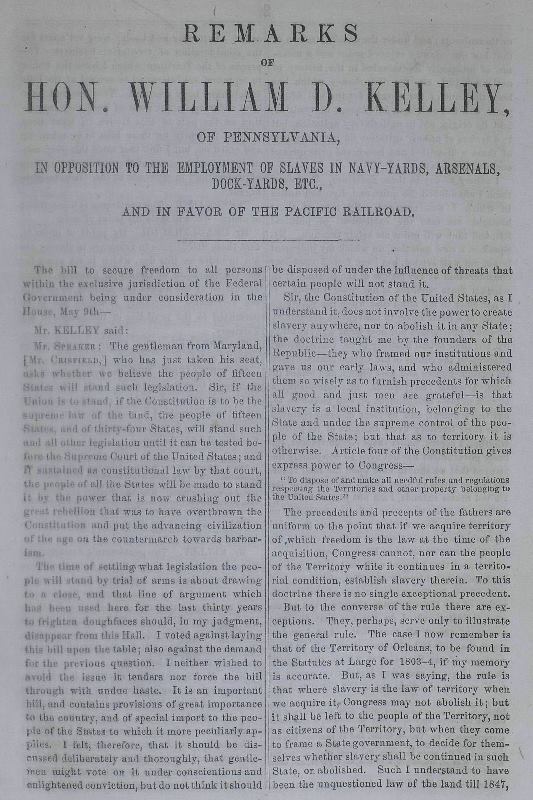 Representative William Darrah Kelley (1814-1890) was an abolitionist, friend of Abraham Lincoln, and one of the founders of the Republican Party. Speaking in opposition to the federal government’s employment of slaves in navy-yards, arsenals, and dock-yards, Kelley begins his argument by discussing jurisdictional issues. He notes that until 1847 it was understood slavery could not be established in a territory by either the U.S. Congress or the territorial government, nor could slavery be abolished in a territory that allowed slavery when it was acquired by the United States. These decisions could only be made by some of the peoples occupying the lands which were transitioning from territory to state.

Referring to these assumptions, Kelley argues:

…the disturbance which has been the bane of the country for the last fifteen years, and has at length culminated in rebellion, had its origin, not in anti-slavery agitation, but in a system of unholy agitation for the overthrow of these well-settled and beneficent principles of constitutional law.

I adhere to-day to these doctrines. To defend them I abandoned the quiet and dignified duties in which I was engaged. My love of them brought me into the excitement of political life, and they will guide me safely through. Mr. Speaker, a new question, on which my judgment is not yet well settled, has been forced upon our consideration by the people of the South. It is, whether State rebellion is not State suicide. It is not clear to my mind that when the sovereign people of a State have, in convention assembled, solemnly proclaimed not only their want of fidelity, but their actual hostility to the Constitution; suppressed the courts of the United States, closed its custom-houses and post offices, and seized its forts, arsenals, navy-yards, &c.; established a system of laws independent of, and unknown to, our Government, and by force of arms removed from their territory every insignia of its power; whether, I repeat, under these circumstances, the State government has not been so completely destroyed that we should look upon the land it embraced as territory over which the power of the United States extends, I am not prepared to say; and until I come to a more definite conclusion on this question, I am willing to act upon the principle that we cannot interfere with slavery in the several States as we have known them.

But does that prevent us from legislating over land ceded to us by any one of those States, and over which, by the express terms of the Constitution of the United States, Congress has exclusive jurisdiction? I do not see that the two questions are at all connected.

Now, Mr. Speaker, the question is whether, having exclusive legislative power over the places enumerated in the bill, we shall prohibit slavery therein. To do so is, as I have shown, clearly within our constitutional power, and I believe it to be required by the best interest of the country.  I believe that the immediate passage of this law will secure future peace by excluding discussions of this subject from Congress when our flag shall again float over every inch of our territory, and the subdued and chastened, if not subjugated people of the rebellious States shall have Representatives upon this floor.