‘This Superannuated and Irritable Governor’: Highlights from Territorial Papers of the United States 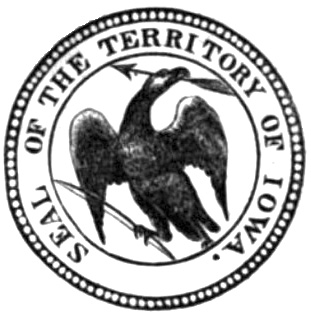 The December release of Territorial Papers of the United States, 1765-1953, includes a letter to President Van Buren from the secretary of the Iowa Territory containing his most recent contentious exchange with the territory’s governor; a follow-up petition by several territorial legislators seeking removal of the governor; and finally a memorial by the territory’s legislative assembly asking the president to remove the governor for his “total want of abilities.”

Dispute between the Secretary and Governor, January 8, 1839 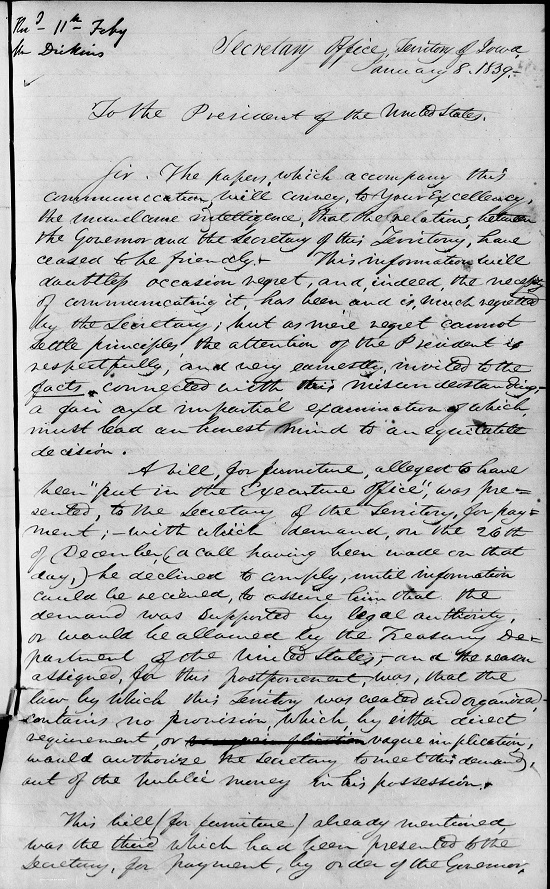 Writing to President Martin Van Buren, the secretary of the Iowa Territory (William Bernard Conway) describes the breakdown of his relationship with the territory’s governor (Robert Lucas).

The papers, which accompany this communication, will convey, to your Excellency, the unwelcome intelligence, that relations, between the governor and the Secretary of this Territory, have ceased to be friendly. This information will doubtless occasion regret, and, indeed, the necessity of communicating it, has been, and is, much regretted by the Secretary; but as mere regret can never settle principles, the attention of the President is respectfully, and very earnestly, invited to the facts connected with this misunderstanding, a fair and impartial examination of which, must lead an honest mind to an equitable decision.

At the heart of the “misunderstanding” was a “bill for furniture alleged to have been ‘put in the Executive Office.’” Secretary Conway explains:

This bill (for furniture) already mentioned, was the third claim which had been presented to the Secretary, for payment, by order of the Governor, and how many more, might, or would, have been presented, if these had been paid, nothing but the genius of prophecy can determine.

The secretary notes that he refused to comply with the governor’s order “until information could be received, to assure him that the demand was supported by legal authority, or would be allowed by the Treasury Department of the United States; and the reason assigned, for this postponement, was, that by law, by which this Territory was created and organized, contains no provision, which, by either direct requirement, or vague implication, would authorize the Secretary to meet this demand out of the public money in his possession.”

Secretary Conway’s handwriting, perhaps betraying his growing anger, becomes less legible as he further describes the situation between himself and the governor. He provides the immediate source of his frustration, the irksome letter of Governor Lucas dated December 26, 1839.

I wish you to inform me distinctly the reason why you refused to pay for the furniture put in the Executive Office out of the appropriation made by Congress. Whether you consider the Executive Office separate and distinct from that of the Secretary of the Territory, and if so your reasons for this conclusion?

I would also wish to know whether you do, or do not intend to discharge the duty required of you by the organic law, relating to recording the acts and proceedings of the Governor in his Executive department? Nothing of this kind has as yet been done by you, and I think it is time that this business was commenced. If it is not your intention to perform your duty, I wish to know it, that I may make a representation to the proper department at Washington.

I wish an explicit and unequivocal answer to the above.

Conway concludes his letter to the president this way:

Many vexations, ungraceful, petulant, ill-natured and dogmatical interferences, with this Department, had preceded this rupture of the 26th of December, and the time had arrived for a proper adjustment of the relations of the parties. The Secretary understands his duty, has performed his duty, and is disposed to perform his duty; but not withstanding all this, this superannuated and irritable Governor would ride down the Secretary, and every other object, or thing, that would not bend, with servile pliancy, before his rude and offensive assumptions.

Secretary Conway includes his response to Governor Lucas in which, as he informs President Van Buren, “the Secretary has been very plain and perspicuous, and his perspicuity may perhaps surprise the President. But it is enough to say, all this was sternly required by the occasion.”

Sir: Your communication, of Dec. 26th, was duly received, by the hand of Mr. Parvin, and to which an answer would have been immediately returned, if the difficulty of framing a suitable reply had not been almost insurmountable. I must confess in that I have never been placed in a position so entirely undesirable, as that into which I have been driven by your unwelcome and unexpected interrogations.

Conway goes on to answer each demand before concluding his letter, penning:

How far the efforts of the Secretary have contributed to organize, and sustain, this Government, it is neither his wish, nor his province, to determine; but that it has encountered any obstruction, inconvenience, or evils, from his delinquencies, or indiscretion, is most emphatically denied. And the mildness, docility and gentleness, which characterized his intercourse, with your Excellency, up to the day on which he politely declined the payment of Mr. Woods’ bill, was certainly not amongst the least difficult of social achievements; nor could anything, less exceptionable than a demand involving a principle, to which duty and inclination obliged the Secretary to adhere, have been deemed sufficient to authorize the perspicuity disclosed in this communication; because your age and station import claims to respect which tyranny itself must fail to invalidate.

Your Excellency can now make “representations to the proper Department at Washington,” and misrepresentations, should any be made, SHALL recoil on the head of their author.

Petition of Sundry Members of House and Council to President Van Buren, Asking for Removal of Governor Lucas, January 12, 1839 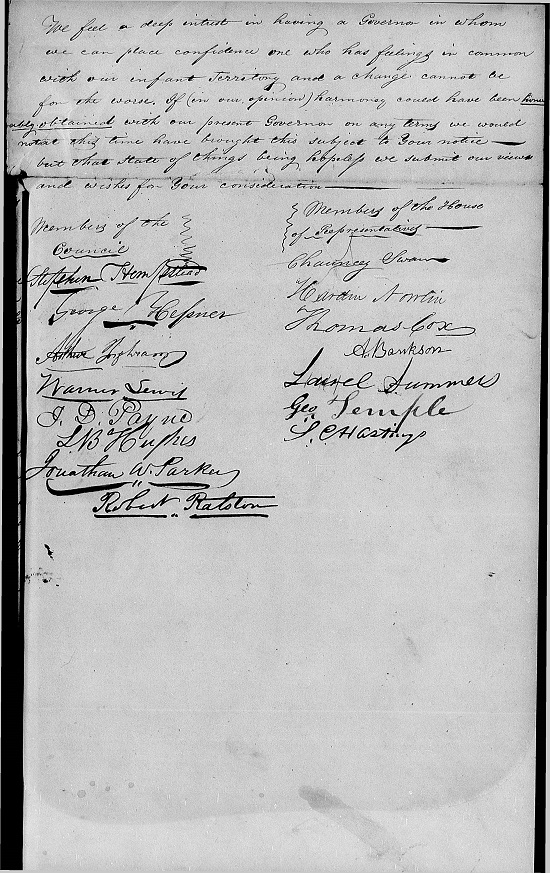 Discontent with the Iowa governor grew and by the middle of January 1839 several territorial legislators signed the following petition to the president.

We feel a deep interest in having a Governor in whom we can place confidence one who has feelings in common with our infant Territory and a change cannot be for the worse. If (in our opinion) harmony could have been honorably obtained with our present Governor on any terms we would not at this time have brought this subject to your notice, but that state of things being hopeless we submit our views and wishes for your consideration. 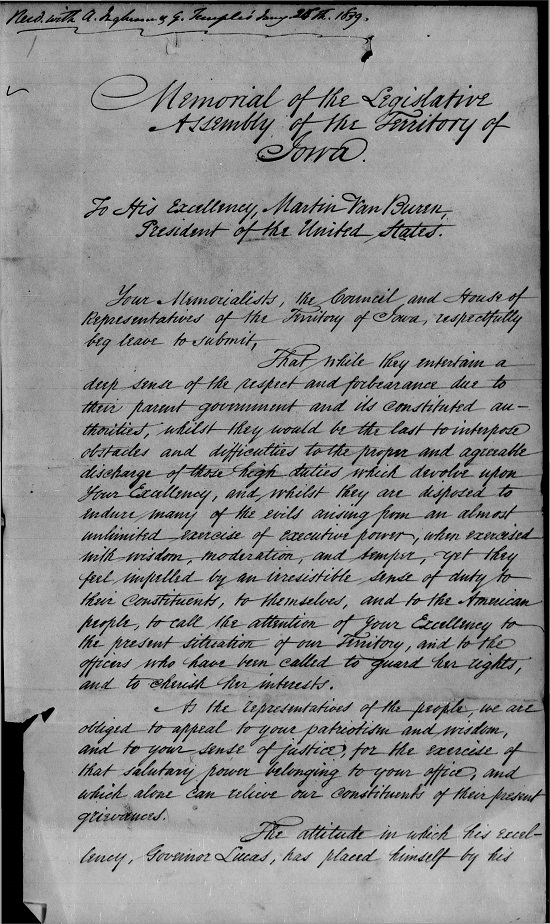 By the end of January 1839 the desire to remove the governor had increased, leading the legislative assembly of the Territory of Iowa to submit a memorial to the U.S. president.

That while they entertain a deep sense of the respect and forbearance due to their parent government and its constituted authorities, whilst they would be the last to interpose obstacles and difficulties to the proper and agreeable discharge of those high duties which devolve upon your Excellency, and whilst they are disposed to endure many of the evils arising from an almost unlimited exercise of executive power, when exercised with wisdom, moderation, and temper, yet they feel impelled by an irresistible sense of duty to their constituents, to themselves, and to the American people, to call the attention of your Excellency to the present situation of our Territory, and to the officers who have been called to guard her rights and to cherish her interests.

No man was ever called to the Executive chair under more favorable auspices than was Robert Lucas. From his former military services, and his experience as a Legislator and as a Governor, the people were prepared to expect much, and he was received in our territory cordially and with open arms. They were led to believe that wisdom, moderation, and good temper would characterize all his official acts, as well as his private intercourse; but these agreeable anticipations have been in a great measure unanswered.

Among the litany of complaints against the governor were his misuse of funds, nepotism, and “a total want of abilities, not only to govern in time of peace, but more especially to command in time of war.”

For more information about making this digital collection available at your library, please contact Readex Marketing.