‘In the wild deserts of Ohio’: Highlights from Early American Imprints, Series II: Supplement 3 from the American Antiquarian Society

The current release of Early American Imprints, Series II: Supplement 3 from the American Antiquarian Society includes several exceedingly rare imprints, including the captivity narrative and children’s poetry books highlighted below.  Each is illustrated.

The Cries of London, As They Are Daily Exhibited in the Streets. With an Epigram in Verse, Adapted To Each. Embellished with Elegant Characteristic Engravings (1805) 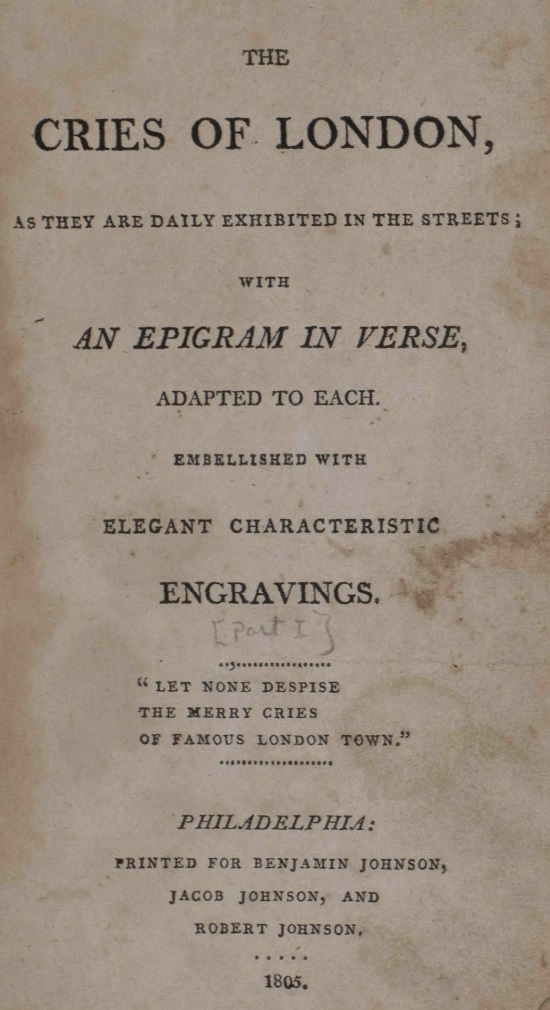 Similar to other books about the street mongers of New York and Philadelphia, this imprint is beautifully illustrated by intaglio prints attributed to William Ralph. In the preface, the author admonishes the reader not to abjure the lower classes which engage in street sales who are “generally speaking, of the lowest and most illiterate order.” However, he advises respect:

…and daily experience will demonstrate, that the most amiable virtues and excellent dispositions are frequently met with in the lowest spheres of life; and therefore, although we should not act towards our inferiors with an unbecoming familiarity, we should never treat them with haughtiness, nor make them the subject of our ridicule; remembering, that while a sounding title or a weighty purse may excite the temporary admiration of an unthinking multitude, virtue, piety, and integrity, are the only things that can ensure the blessing of Heaven, and render us truly respectable.

The preface concludes with a verse about London the last few lines of which pose a question.

Many jilts and more seducers,

Many an exciseman smuggling,

Statesmen in the treasury juggling;

Many maids and lovers billing,

Many widows not unwilling;

Many a bargain, could ye strike it—

There ensues a series of illustrations each accompanied by a verse. As an example:

His fowls and ducks

All for a little ready-rhino;

Then quick he pops

This many know as well as I know.

Other street mongers include a man selling oranges, the sandman, the hot cross bun woman, and the chair caner among others. While the verses are entertaining, it is the quality of the illustrations that is most compelling. 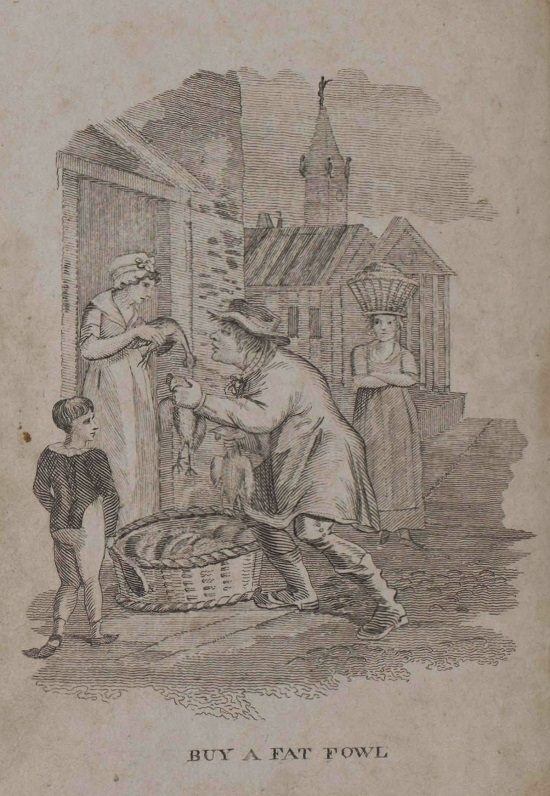 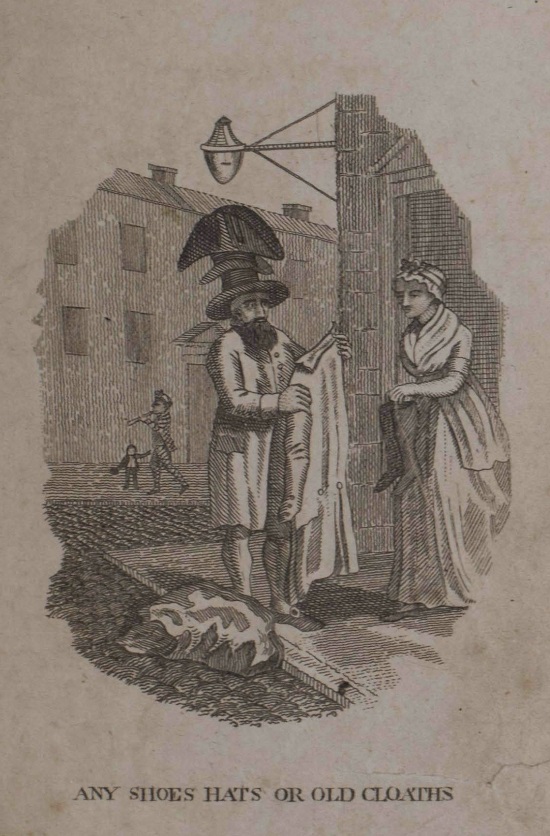 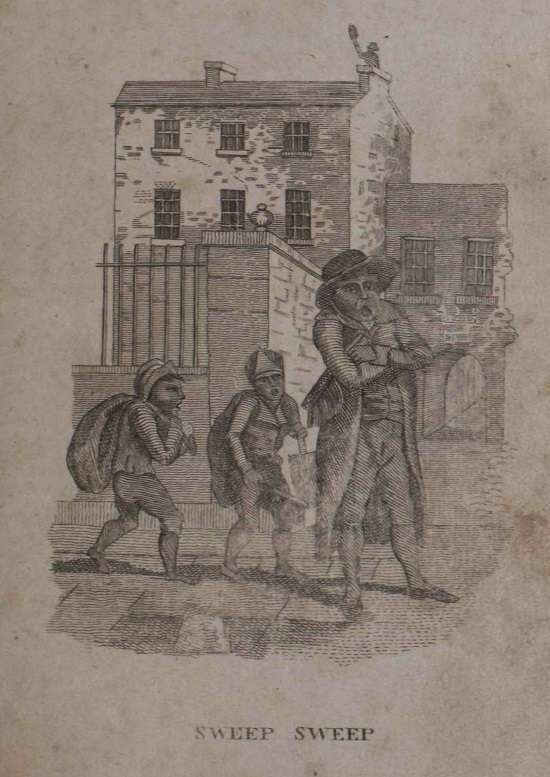 The History of the Horrid Murder of Michael Burlingame, His Wife, Five Children & Servan [sic] by the Koowanchooty Indians in Ohio. Together with the Assassination of the Chief of that Tribe, Ten Indian Warriors, Two Women & Three Children by Angelina Burlingame, and Her Escape (1803) 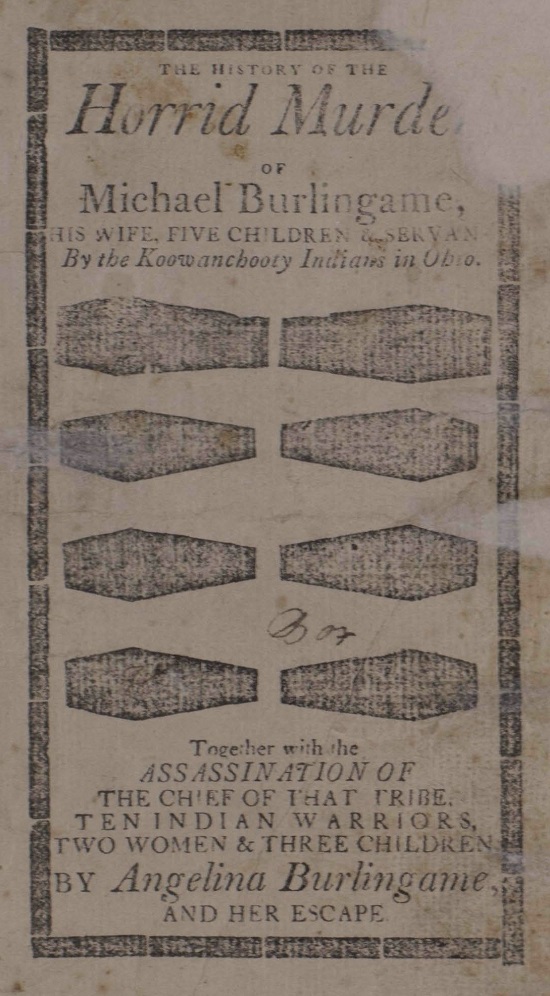 Early European Americans were fascinated and horrified by captivity narratives describing the alleged depredations committed by Indians against white settlers. This imprint is considered fictional, but likely that made no difference to contemporary readers. In addition to gruesome accounts of the savage attack on and death of all but one family member, we are introduced to a young woman of extraordinary grit. She is the sole survivor of the slaughter of her family, the Burlingames, who were early settlers in Ohio.

The trek west was fraught, and their travails are dramatically recounted.

About noon the clouds came up very fast, the air grew piercing, fog appeared around, and so encreased [sic] that in a short time objects at two or three rods distance were scarcely discoverable. It was now that this family felt severely the disagreeableness of their situation; in the wild deserts of Ohio, far from the abode of civilized beings, distant from prospects of human relief, enveloped in clouds at noon day, benumbed with cold and faint with hunger, and there to remain until chance might throw in their way the happy medium of release.

So much worse than this storm awaited them. Having found shelter for the night, they awakened to horror as they were attacked by the Indians.

Mrs. Burlingame and Angelina, her eldest daughter, supposing by the noise they had heard, that their defenders were murdered, and that the indians had retired, ran out in a frantic manner, uttering loud lamentations, on which the indians returned, and as they drew near Mrs. B. swooned, while Angelina, scarcely knowing what she did, fled to the waggon, opened a large chest, from which they had taken their bed clothes a few hours before, threw herself into it, and pulled down the lid, the chest locking as it shut. Mrs. B. was seized by two indians, dragged a few rods, scalped, and left for dead; Angelina not being found they concluded she had taken to the woods. They next proceeded to the hut, where they found four children running about in the most frantic despair; they instantly dash out the brains of the two youngest against the wall, and stripping them threw their mangled bodies to their dogs…

The “monsters” are not yet through with the savagery. The older two children are cruelly dispatched, and the father and servant also meet gruesome fates. Only Angelina survived. She was transported by the Indians in the chest, discovered by the Chief who determined to marry her. The intrepid girl contrives to sedate all of the Indians after which she kills all of them and makes her escape heading east. The journey is rugged and she suffers, but we won’t spoil the story by revealing the ending here.

The History and Adventures of Little Eliza, a Companion to Little William: Illustrated with a Series of Elegant Figures (1811) 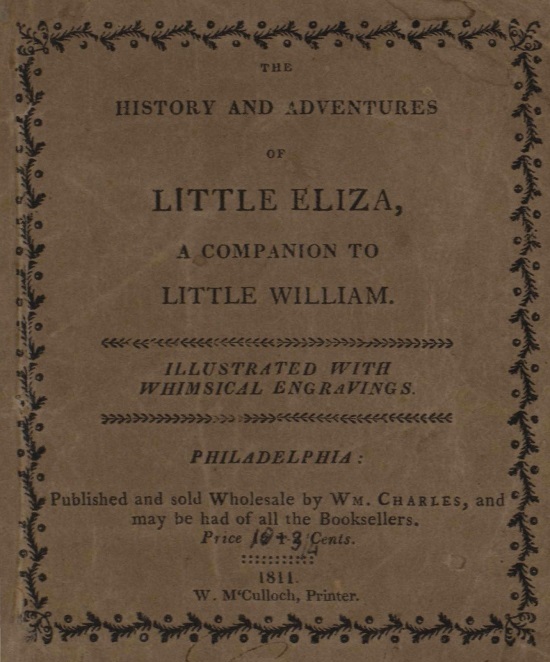 In contrast to Angelina, little Eliza had an easy time of it.

Eliza in the Garden reading a little Book.

See Eliza in the garden with her book,

With spotless heart, and innocent her look;

Her parents’ hope, she is their only child,

Care was a stranger to her infant breast,

She knew not what it meant to be distrest.

Her days in happiness thus Eliza past,

And each day brought more pleasure than the last;

At school she learn’d to spell and read with ease,

All that Eliza did was sure to please.

Sorrow’s a thing of which she never dream’d.

Sadly, Eliza one day defies her mother and heads to the fair unattended. On her way home she is stolen by gypsies and is forced into fakery in pursuit of profit.

They teach her lies, and ev’ry thing that’s bad,

Pretend to teach her what no art can reach,

Of what’s to come she learns to make a speech.

False are her words, and artful is her mein;

She says, if once her hand with silver’s cross’d,

That she can tell where things are that are lost;

Looks in your hand, examines all the palm,

And from the lines forbodes you good or harm.

And ev’ry night she seeks in vain for rest.

Eliza escapes the gypsies and subsequently resorts to selling matches, sweeping street crossings, and gathering watercress to sell. Happily, she is taken in a by a kind “dame who lov’d to help the poor” and by chance is soon reunited with her parents:

She works and reads, but goes not out alone;

They keep with gratitude the happy day

Their walk conducted them in Eliza’s way.

While the story is short and possibly predictable, the hand-colored illustrations are lovely. 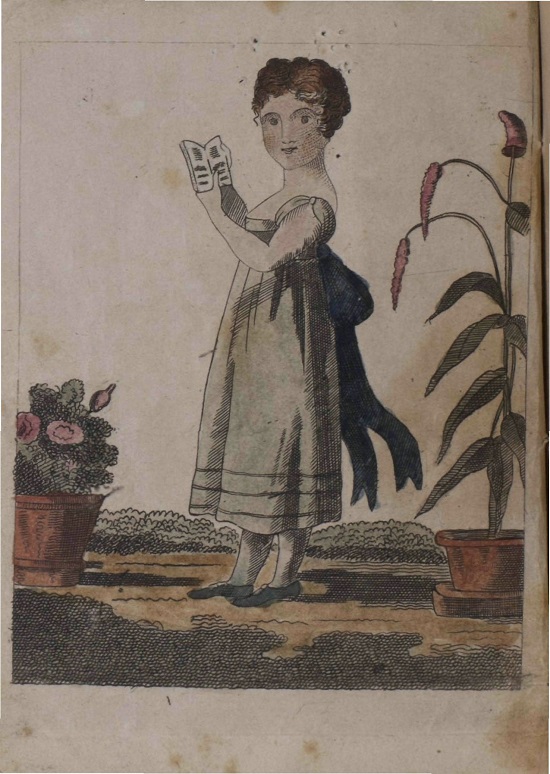 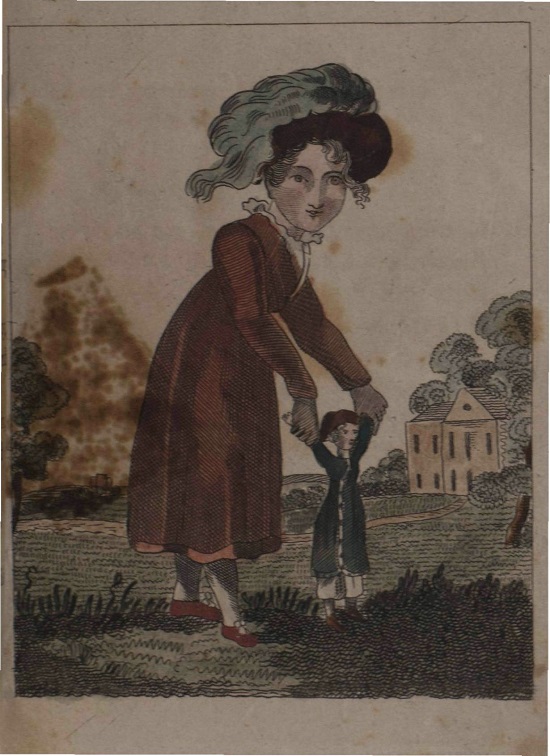 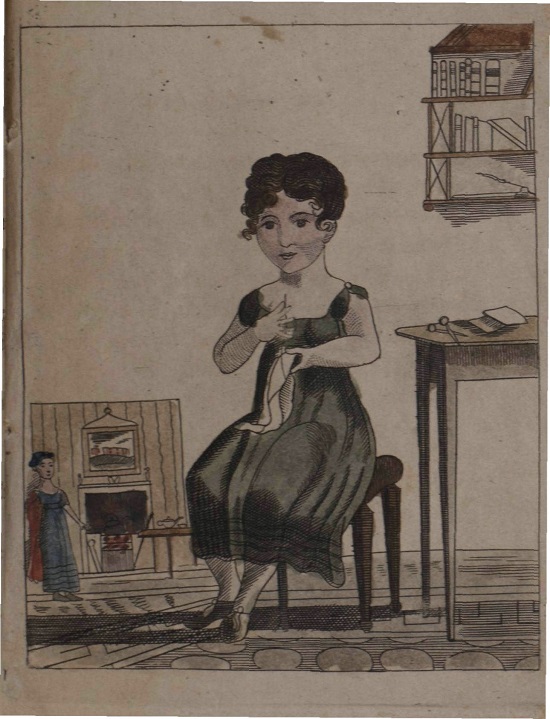