The February release of Early American Imprints, Series II: Supplement 1 from the American Antiquarian Society includes many scarce printings, including a history of the Colony of Virginia by Thomas Jefferson, a description of the wide array of forest trees in North America, an affidavit attesting to a sea monster sighting, and an advertisement for an act of acrobatics. 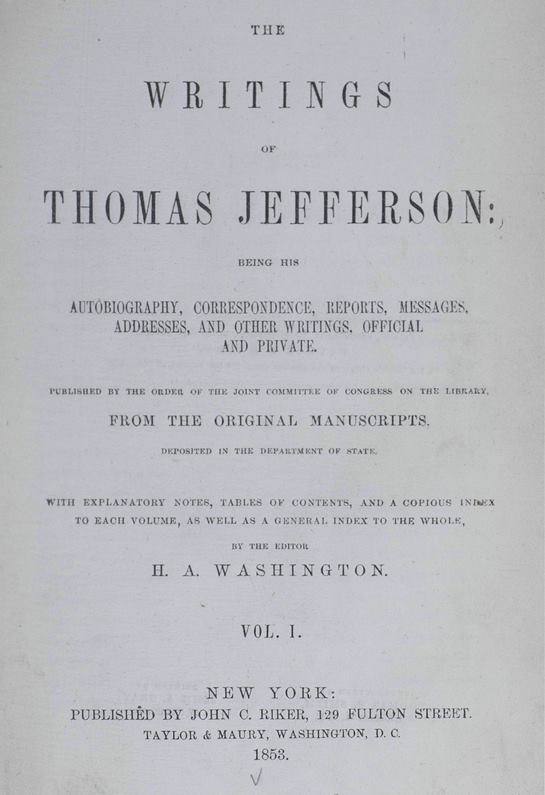 The third president of the United States prefaces his work with a letter written in late February 230 years ago:

The following Notes were written in Virginia, in the year 1781, and somewhat corrected and enlarged in the Winter of 1782, in answer to queries proposed to the author, by a foreigner of distinction, then residing among us. The subjects are all treated imperfectly; some scarcely touched on. To apologise for this by developing the circumstances of the time and place of their composition, would be to open wounds which have already bled enough.

Jefferson writes about many topics, including early religious intolerance in the Colony of Virginia:

The first settlers in this country were emigrants from England, of the English church, just at a point of time when it was flushed with a complete victory over the religious of all other persuasions. Possessed, as they became, of the powers of making, administering, and executing the laws, they showed equal intolerance in this country with their Presbyterian brethren, who had emigrated to the northern government. The poor Quakers were flying from persecution in England. They cast their eyes on these new countries as asylums of civil and religious freedom; but the found them free only for the reigning sect. Several acts of the Virginia assembly of 1659, 1662, and 1693, had made it penal in parents to refuse to have their children baptized; had prohibited the unlawful assembling of Quakers, had made it penal for any master of a vessel to bring a Quaker into the state; had ordered those already here, and such as should come thereafter, to be imprisoned till they should adjure the country; provided a milder punishment for their first and second return, but death for their third; had inhibited all persons from suffering their meetings in or near their houses, entertaining them individually, or disposing of books which supported their tenets. 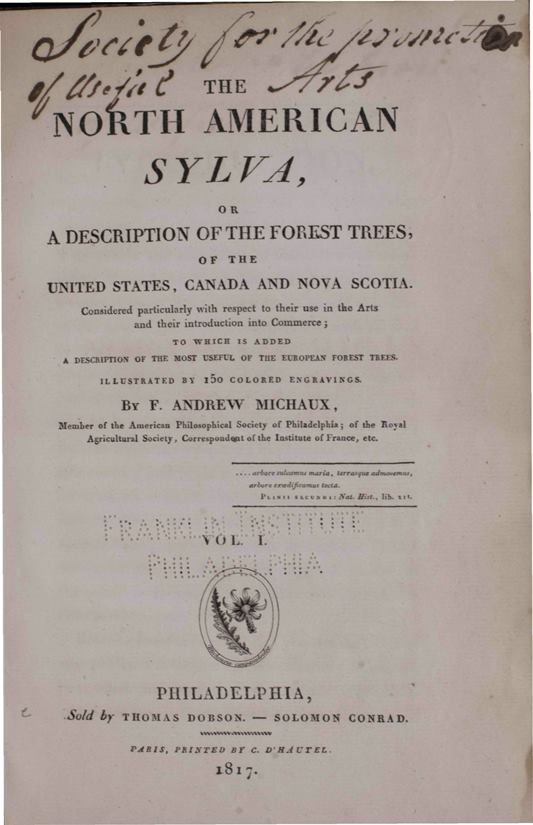 French botanist François André Michaux (1770-1855) worked as the royal collector for France and traveled throughout North America from 1785-1796 examining the forests. Michaux’s three-volume opus includes his descriptions of the trees, “with respect to their use in the arts and their introduction into commerce.” It includes 150 colored engravings by over a dozen artists. 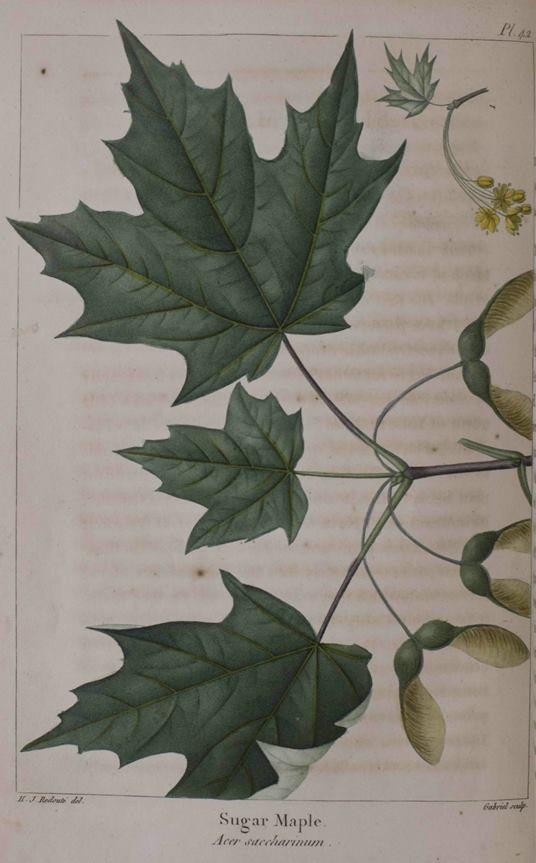 In Volume 1 Michaux indexes a tree on the mind of many New Englanders this time of year, the sugar maple.

This species, the most interesting of the American Maples, is called Rock Maple, Hard Maple, and Sugar Maple. The first of these names is most generaly [sic] in use, but I have preserved the last, because it indicates one of the most valuable properties of the tree.

The work is commonly taken in hand in the month of February, or in the beginning of March, while the cold continues intense, and the ground is still covered with snow. The sap begins to be in motion at this season, two months before the general revival of vegetation.

He continues, describing the process and concluding with the final boil:

Some persons recommend leaving the sirop twelve hours, before boiling it for the last time; others proceed with it immediately. In either case, the boilers are only half filled, and by an active, steady heat, the liquor is rapidly reduced to the proper consistency for being poured into moulds. The evaporation is known to have proceeded far enough, when, upon rubbing a drop of the sirop between the fingers, it is perceived to be granular. 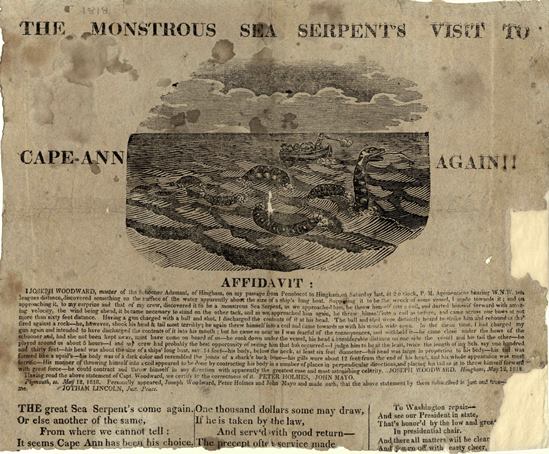 I, Joseph Woodward, master of the Schooner Adamant, of Hingham, on my passage from Penobscot to Hingham…discovered something on the surface of the water apparently about the size of a ship’s long boat. Supposing it to be the wreck of some vessel, I made towards it; and on approaching it, to my surprize and that of my crew, discovered it to be a monstrous Sea Serpent, as we approached him, he threw himself into a coil; and darted himself forward with amazing velocity…and as we approached him again, he threw himself into a coil as before, and come across our bows at not more than sixty feet distance. Having a gun charged with a ball and shot. I discharged the content of it at his head. The ball and shot were distinctly heard to strike him and rebound as tho’ fired against a rock—he, however, shook his head & tail most terribly; he again threw himself into a coil and came towards us with his mouth wide open. 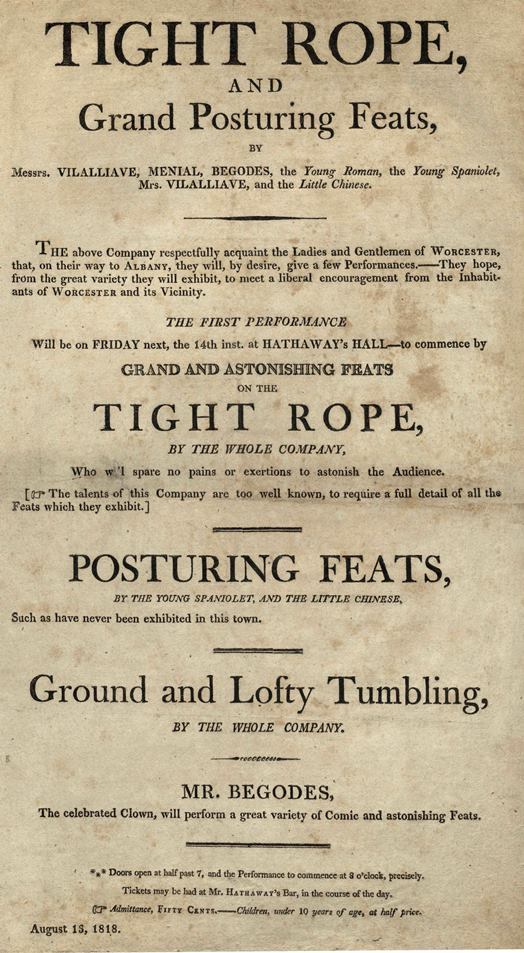 Grand and astonishing feats on the tight rope, by the whole company, who will spare no pains or exertions to astonish the Audience.

Mr. Begodes, the celebrated Clown, will perform a great variety of Comic and astonishing Feats.