‘Frowning upon every privilege of birth’: Highlights from Afro-Americana Imprints, 1535-1922

Included in the January 2017 release of Afro-Americana Imprints, 1535-1922: From the Library Company of Philadelphia are several works that provide insight into the conditions under which many African Americans lived in Antebellum America.

The Farmer’s Accountant and Instructions for Overseers (1828)

Pleasant Suit, the author of this bookkeeping guide for farmers, notes that he has “been in the habit of keeping Books upwards of thirty years, part of the time in the largest importing and exporting Mercantile house in Virginia.”  He illustrates his method of accounting for African Americans among other “stock accounts” with charts like this: 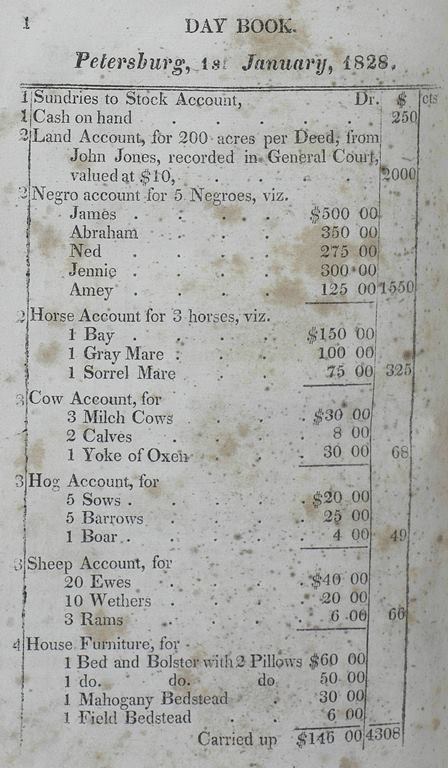 Entries in the book’s “F.A.Q.” section include:

A. Because it is a component part of it, and it enables you at all times to know how many you have, by comparing the debtor’s side with the credit: If any are sold you credit the account by what you receive, and if one or more dies you credit the account by Profit and Loss for the valuation; and if your women should have children, you debit this amount to Profit and Loss for the number and value of them.

1st. No negro should be permitted to go off the plantation, on his or her own business, without a written pass in the following form…

2d. No negro should be allowed to sell any thing without a written permit…

3d. Fighting should be most strictly forbidden, unless by a foreman in the exercise of his proper authority, or by a father or mother…

4th. It should be the duty of every negro, to take up, or give information to the Overseer, of every negro who may come among them, and cannot give a proper account of himself, and they should be especially prohibited from entertaining watermen, where the estate is on the river.

Note. —For a violation of either of the first four rules, whipping ought to be inflicted in such portions as the degree of the offence, and the discretion of the Overseer may lead him to think necessary….Severe punishment for lying, running away, stealing, or in any manner resisting the authority of the Overseer, is so universally admitted to be necessary, that I think it useless to take further notice of such cases. 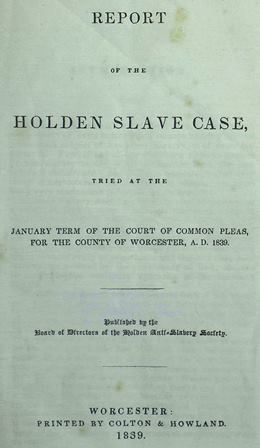 The prosecutor’s explanation of the charges in the Holden slave case shares a line of reasoning similar to that used to determine a pilot’s sanity in Joseph Heller’s Catch-22. The Holden case involves a slave owner, Mrs. Eames, who traveled from Louisiana to the free state of Massachusetts with her slave, Anne, and several defendants. The latter were charged with conspiring to defraud Mrs. Eames of her slave’s labor by freeing Anne. The prosecutor not only argues the defendants are guilty, because Anne had not sought her freedom even though it was not clear she knew she could, but also defends Anne’s right to be a slave.

If Mrs. Eames did imprison her [Anne], she might be brought into Court, and she might apply to the Court for security. But the allegation, in the indictment, is, first, that Anne was not restrained of her liberty at all. Anne was there voluntarily. She did not suppose that her liberty was infringed. Yet the defendants sued out the writ, while there was no duress. It is alleged that Anne had no knowledge of the writ. This is an offence, and it is the offence charged in the indictment. No persons, claiming to be the friends of Anne, had a right to sue out this writ, without her consent. Still, we must be careful not to infringe on the rights of minors. Few, if any, children of those who are educated, know any thing of the writ of personal replevin, much less, one brought up in bondage. If Anne, in any way intimated a desire, directly or indirectly, that aid in some form should be granted, the defendants are not only excused but justified. If it was done without her knowledge or consent, the defendants are liable, Anne not being in bondage….So, if a slave should be brought here, and prefer to go back into slavery, we have no right to prevent it. It was so with Anne. She had a right to return and be a slave.

Argument of Charles Sumner, Esq., against the Constitutionality of Separate Colored Schools (1849)

Arguing on behalf of Sarah C. Roberts before the Supreme Court of Massachusetts, Charles Sumner fought to desegregate the public schools of Massachusetts in 1849. He began by asking: 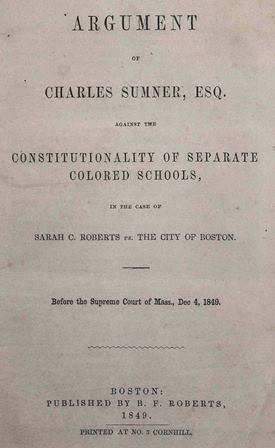 …are the Committee, having the superintendence of the public schools of Boston, entrusted with the power, under the constitution and laws of Massachusetts, to exclude colored children from these schools, and to compel them to resort for their education to separate schools, set apart for colored children only, at distances from their homes less convenient than those open to white children?

This important question arises in an action by a colored child, only five years old, who, by her next friend, sues the city of Boston for damages, on account of a refusal to receive her into one of the public schools.

Sumner continues, calling the court’s attention to both the nation’s and commonwealth’s highest ideal:

“All men are created equal,” says the Declaration of Independence. “All men are born free and equal,” says the Massachussets [sic Massachusetts] Bill of Rights. These are not vain words. Within the sphere of their influence no person can be created, no person can be born, with civil or political privileges, not enjoyed equally by all his fellow-citizens, nor can any institution be established recognizing any distinctions of birth. This is the Great Charter of every person who draws his vital breath upon this soil, whatever may be his condition, and whoever may be his parents. He may be poor, weak, humble, black—he may be of Caucasian, of Jewish, of Indian, or of Ethiopian race—he may be of French, of German, of English, of Irish extraction—but before the Constitution of Massachussets [sic Massachusetts] all these distinctions disappear.

Sumner reiterates this principle before turning to the future as he concludes:

I have occupied much of your time, but I have not yet exhausted the topics. Still…we are brought back to one single proposition—the equality of men before the law. This stands as the mighty guardian of the rights of the colored children in this case. It is the constant, ever-present, tutelary genius of this Commonwealth, frowning upon every privilege of birth, upon every distinction of race, upon every institution of Caste. You cannot slight it, or avoid it. You cannot restrain it. It remains that you should welcome it. Do this, and your words will be a “charter and freehold of rejoicing” to a race which has earned by much suffering a title to much regard. Your judgment will become a sacred landmark, not in jurisprudence only, but in the history of Freedom, giving precious encouragement to all the weary and heavy-laden wayfarers in this great cause. Massachusetts will then, through you, have a fresh title to regard, and be once more, as in times past, an example to the whole land.