‘Guaranteed to blow a body-snatcher over the highest church steeple’: Coffin Torpedoes and Other 19th-Century Burial Devices 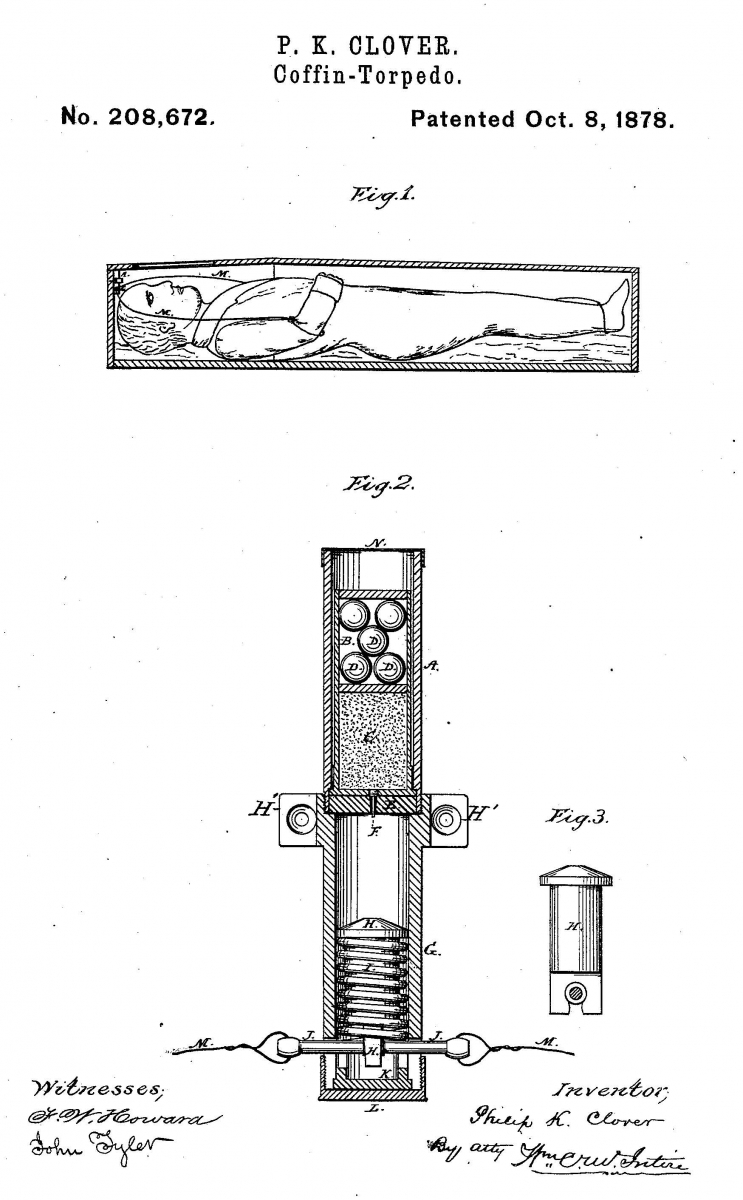 During the Second Industrial Revolution, Americans were introduced to an array of life-changing products—from the automobile to the lightbulb to the telephone. But 19th-century inventors also designed products with “a post-mortem relation to the needs of mankind.”

Several of these “inventions for the tomb” were highlighted in an 1896 issue of the St. Louis Republic.

The “coffin torpedo” is the latest patented device in the line of burial appliances. It is introduced into the casket before the latter is closed, the arrangement being of such that any attempt to force the receptacle open will release a spring, strike a percussion cap and set off the bomb. This means almost sure death to the unsuspecting grave robber, whose industry the invention in question is designed to discourage.

In addition to describing devices to prevent grave robbery, the article explains the latest inventions designed to indicate the buried isn’t dead yet.

Live people do a great deal of thinking about death, if one is to judge from the immense numbers of patents that have been granted for inventions having relation to the tomb. They run up into the thousands, and not a few of them are weird and grisly enough to make the flesh creep. Among the most interesting are the so-called “life signals.” These contrivances intended to secure the release of persons prematurely interred....

All of the patented devices for life signals have one feature in common—namely, a wire or cord attached to the hand of the supposed corpse. In each case it is intended that any movement shall set off an alarm of some kind. One contrivance employs a small red flag, which shoots up from the grave and displays itself above ground if required. Another is called a “garve [sic] annunciator.” A disturbance in the coffin closes an electric circuit and springs an alarm in the watchhouse of the cemetery. The superintendent takes note of the number of the grave indicated by the alarm and proceeds without delay to dig up the victim.

Other burial devices included tubes and fans to force air into the casket, bells and alarms, and even a lamp and reflector, so arranged that one may look down and see the face of the deceased.” The article then turns to the wide range of materials from which coffins could be constructed.

One inventor proposes to make burial caskets out of blown glass, the mortuary receptacle being in two halves united by a strip of rubber, so as to be air tight. There are coffins molded out of paper pulp, coffins of artificial marble, coffins of wire coated with asphaltum, coffins lined with artificial stone, coffins of potter’s clay, coffins of celluloid, coffins of hard rubber and cement coffins filled in with excelsior and glycerine for a preservative. One of the queerest coffins is manufactured out of a mixture of plaster of paris [sic], cork dust, animal hair, dextrine, Indian red and water. It is warranted light and durable.

Inflammable coffins to aid in cremation and wicker coffins to speed decomposition were also designed. However, fear of grave robbers was never far from the surface.

One inventor proposes to fill his airtight casket with a preservative gas. A “portable vault” intended to hold a coffin of iron, is of iron, with catches inside so arranged that the receptacle cannot be opened. If grave robbers should succeed in carrying it away on a truck, they would have great difficulty in forcing it open.

An 1879 article from The Bennington Banner reported on a variety of innovative “means to prevent grave-robbing.”

A man in Iowa proposes to fill the space around a coffin with hydraulic cement, which will soon become so hard that it cannot be broken without using a blast of powder. A citizen of Cincinnati has patented a coffin safe designed to protect the remains of the dead from the emissaries of dissecting rooms. It consists of a case much larger than the coffin and is composed of bars of wrought iron. In filling the grave dirt passes between these bars in such quantities that the safe cannot be lifted without the aid of a derrick.

…a New York man has patented a coffin torpedo, designed for the extinction of grave robbers. It consists of a canister containing powder, balls and firing trigger so arranged that it will cause the powder to explode should any one open the lid of the coffin. A more summary way of disposing of grave robbers is prepared by a Massachusetts inventor. He would put a charge of dynamite in the grave, so that a touch of a spade would cause its explosion. This would be pretty severe not only on the dispoilers [sic] but the occupants of graves. For that matter it would be rather severe on neighboring grave-stones, and other monuments to the memories of the dead as well as fences and shubbery [sic].

Headlined “Rattle Brain Ideas,” this 1890 article from The Sunday Oregonian points out additional downsides to burying bombs in the cemetery.

He [the New York inventor] does not reflect that in this day of changing graveyards some of the generations of the future may want to remove their forefathers and may to their great surprise be given an immediate introduction to them through his torpedo. A Massachusetts Yankee has patented a dynamite bomb which he places in the tomb. This would shoot the grave robber up to Heaven and it is equally probable that it might send both coffin and the corpse down to the other place. 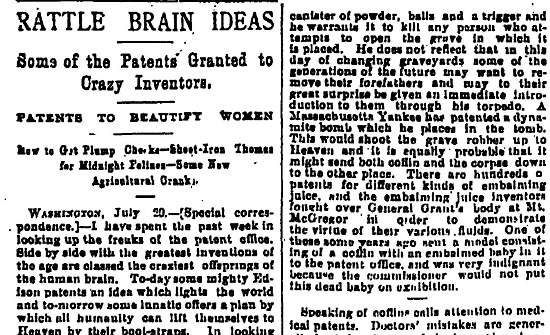 Another reference to the coffin torpedo is found in the brief business notice published in a 1900 issue of the Grand Rapids Press. It raises the obvious question of whether Wile E. Coyote was a customer.

Articles of association have been filed with the register of deeds by the Acme Burial Device company, limited, of Battle Creek, capitalized at $15,000.

And finally, this 1895 retrospective by the New York Tribune on the year’s newest burial devices also notes the risk to future generations of “bombshells planted in graveyards.”

Of the half-million or more patents issued up to the close of 1895 a liberal share have a post-mortem relation to the needs of mankind. There is a coffin torpedo guaranteed to blow a body-snatcher over the highest church steeple, and it is likely that it would strew the vicinage with the debris of the delving archaeologist of aftertime, though this phase of its utility is not insisted on.…

It is a grewsome [sic] and utterly senseless ingenuity that thus reaches into the sepulchre, making posthumous needs for the poor child of mortality slumbering there…There are enough devices of the sort already without any new rush of invention into that dismal field, and if it be said of the coffin torpedo, the latest of them, that it fills a long-felt want, the remark is also in order that the want is an unreasonable one. A system of bombshells planted in graveyards does not seem to be a necessary protective expedient, and it would expend most of its effect upon posterity, who always sooner or later want the premises for other use.